Hell hath no fury like a radio-active woman scorned in Nathan Juran’s iconic 1958 sci-fi opus Attack of the 50 Foot Woman. Starring B-movie alumni Allison Hayes, William Hudson, and Yvette Vickers, the flick is short, to the point, and incredibly entertaining. Thanks to Warner Archive, this classic romp scores an incredible new transfer with clean audio and a nicely informative audio commentary to punch up the bonus features. For schlocky sci-fi fans, this is a true holiday gift - Highly Recommended

Deeply disturbed with an uncontrollable drinking problem, Nancy Archer (Allison Hayes) supports her lecherous gold-digging husband Harry (William Hudson). While he’s out carousing with the town tart Honey Parker (Yvette Vickers), Nancy gets the bright idea to drive out and confront them - but is met by a radioactive satellite and a giant! Soon after her encounters with the strange object from space, Nancy grows to an inhuman size becoming the terrifying 50 Foot Woman - and she will have her revenge!

At barely an hour, Nathan Juran’s (credited as Nathan Hertz) Attack of the 50 Foot Woman is a hell of a little sci-fi monster show. A veteran of special effects sci-fi movies like The Deadly Mantis, 20 Million Miles to Earth, and the classic The 7th Voyage of Sinbad, Juran took a bare-bones script and slim budget and eeked out 66-minutes of campy entertainment. It may be low budget, it may be a bit silly, and it may not be as inventive as Burt I. Gordon’s 1957 adventure The Amazing Colossal Man, but it’s actually quite smart. The film edges into a number of feminist themes of a scorned wealthy wife while her philandering husband works the local infrastructure laying pipe all over town willy-nilly.

William Hudson’s Harry is the perfect inept sleaze bag. He oozes the kind of confidence people are naturally attracted to, but once people get to know him his game falls apart. Unable to earn a cent on his own, he lounges away his time at the local watering hole. But even natural charisma can get you laid only so many times as he actually leverages the biggest and most expensive diamond in the world just to woo Yvette Vickers’ Honey Parker. This slimeball trait must run in the family as William’s twin brother John Hudson would essentially play the same character in the low-budget chiller The Screaming Skull - also released in 1958. 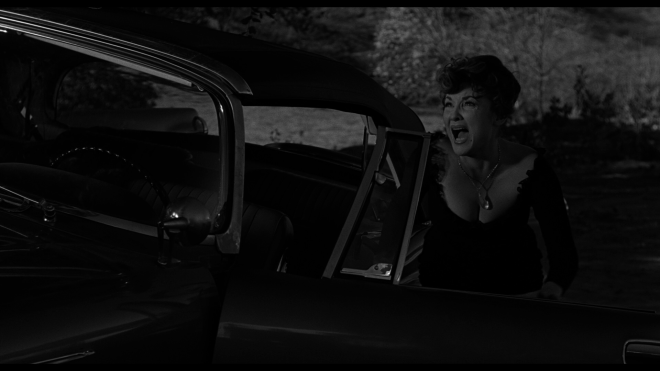 While we don’t see a lot of her in her full 50-foot form, Allison Hayes holds the show with a pretty terrific performance. With credits like Roger Corman’s The Undead and Gunslinger under her belt, she was no slouch when it came to delivering the goods for cheap productions. Little, normal-sized, or really big, Allison holds your attention giving you enough material to feel for her character.

Credit also needs to go to Yvette Vickers. While she plays up the tart role nicely, she’s also got a cunning side. She’s not impressed with Harry’s charm and good looks, she knows he can get money and jewels and she plays him like a fiddle. She’d also appear in Roger Corman’s feature machine with the gritty crime flick I Mobster and again for the slimy Florday creature feature Attack of the Giant Leeches. 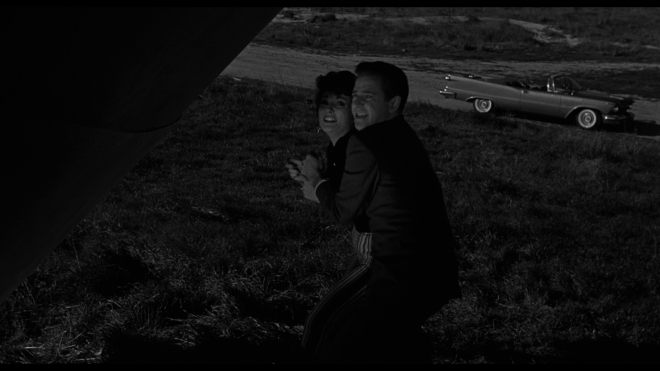 And for as smart as the film is, it unfortunately doesn’t really explore its themes. Hell, it barely explains the strange floating ball in the desert with a human giant walking around. Even the titular “Attack” is saved for the last act. Compare that to Burt I. Gordon’s two giant flicks The Amazing Colossal Man and War of the Colossal Beast and we have a notable deficit of giant-sized mayhem. In terms of leaning into its concept and fully exploring the themes and ideas it rolls with, Christopher Guest’s 1993 made-for-HBO remake explores the ideas a little more. It wasn’t altogether terrible, but it amped up the camp factor a little too far for its own good. By comparison, this classic low-budget B-movie may be ridiculous but it’s played completely straight and all the better for the effort.

Vital Disc Stats: The Blu-ray
Attack of the 50 Foot Woman crashes her way onto Blu-ray thanks to Warner Archive Collection. Pressed on a BD-25 disc, the disc is housed in a standard case featuring the classic artwork. The disc loads to a static image main menu with traditional navigation options.

The 50 Foot Woman stomps her way onto Blu-ray with a lovely 1080p 1.85:1 transfer. After growing up with crappy tapes, I figured WAC’s own MOD DVD was about the best we were going to see for this little underappreciated gem. Thankfully the restoration team pulled out all the stops. From start to finish this is a beautiful flick with impressive details and a gorgeous grayscale. Blacks are deep and inky with nice crisp brilliant whites. The optical effects are soft - as to be expected. This wasn’t a high-budget production so this was largely done on the cheap and easy and some of the process shots barely pass muster. To fix those they’d have to completely redo the effects shots. Fine film grain is present throughout for a welcome cinematic appearance. 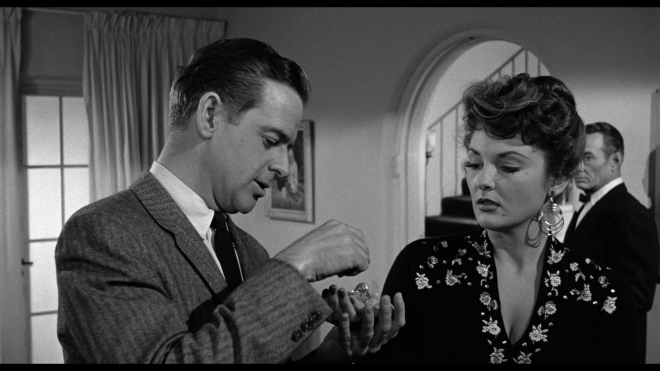 This release also includes a terrific DTS-HD MA 2.0 Mono track. Dialog is clean and clear throughout and there’s plenty of sound effects and ambients in play to give any scene a nice sense of dimension. Imaging is obviously limited by source but that’s to be expected. Scoring by Ronald Stein may not be that inventive, but it certainly gives that creepy doomsday vibe the production needs. When the big action spectacle of the final act kicks in the track is nice and lively for the duration. Free of any serious age-related issues this is an overall clean and effective mix. 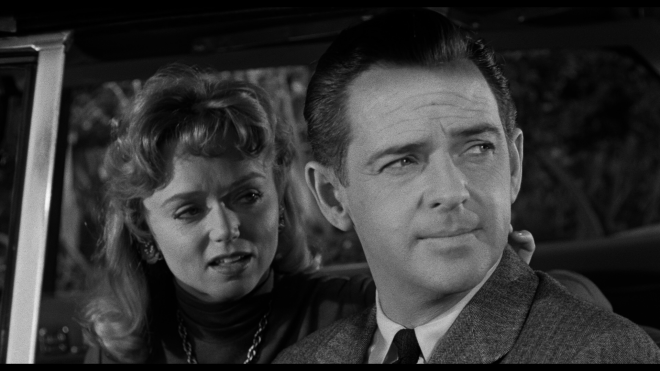 Bonus features unfortunately don’t total up a whole lot. What we get is the archival audio commentary with Yvette Vickers and historian Tom Weaver, which is a great listen if you’ve never gone through it, but that’s it. There are a lot of personalities in play for this feature and a retrospective featurette of the film would have be a nice touch. 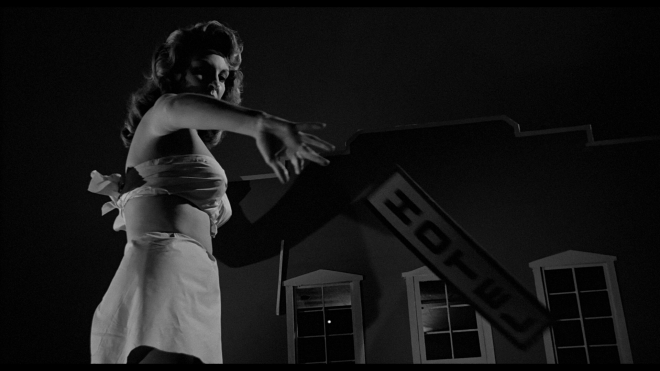 Everyone knows Attack of the 50 Foot Woman - but have you ever actually watched it? Certainly a prime example of low-budget sci-fi, the film offers up some interesting themes and ideas even if the production doesn’t exactly stretch to reach them. Thanks to some great performances, especially Allison Hayes as the titular rampaging tall female, the film stands on its own giant feet for 66 minutes of great entertainment. Warner Archive Collection delivers the goods for a fantastic Blu-ray release sporting a gorgeous transfer, clean audio, and a nice audio commentary to prop up the bonus features. Highly Recommended