It may be 89 years old, but Imitation of Life still wields plenty of power. Though director John M. Stahl's film is an unabashed weepie, its themes of racism, feminism, and social injustice continue to resonate, as do the deeply affecting portrayals of Claudette Colbert, Louise Beavers, and Fredi Washington. Criterion's high-quality Blu-ray slightly improves upon Universal's 2015 release, but is only upgrade-worthy if you're a devoted fan. If you don't yet own Imitation of Life, however, this is the edition to get. Highly Recommended.

Hollywood often shied away from material with racial overtones during its golden era, opting to maintain the status quo and keep the lines between blacks and whites firmly drawn. Yet on the rare occasions when the movie industry did wade into racial waters, the films it produced often concerned the very real and heartbreaking issue of "passing," whereby light-skinned blacks would try to pass themselves off as white, so they could enjoy the freedoms, privileges, and simple acceptance our bigoted society often denied them. Movies such as Pinky, Lost Boundaries, and I Passed for White examine this phenomenon, but without question the most famous film in this mini-genre is Imitation of Life. Adapted from Fannie Hurst's bestselling novel about the identity crisis of a young black woman who seeks to deny her race (much to the dismay and disappointment of her devoted mother), director John M. Stahl's tender, often searing drama also explores a number of other potent themes, which makes it one of the most socially relevant movies of the 1930s.

Motherhood, feminism, romance, and ambition also figure prominently in Imitation of Life, which is also a prime example of the popular “woman’s picture” that raked in millions for movie studios during the 1930s, ‘40s, and ‘50s. Strong female characters dominate this emotional tale, yet Stahl's film (and Douglas Sirk's 1959 remake) avoids wallowing in sentimentality, thanks to honest, sincere portrayals and sensitive, astute direction. Imitation of Life certainly wrings its share of tears, but its substantive nature helps excuse its clichéd manipulations and unabashed sentimentality. 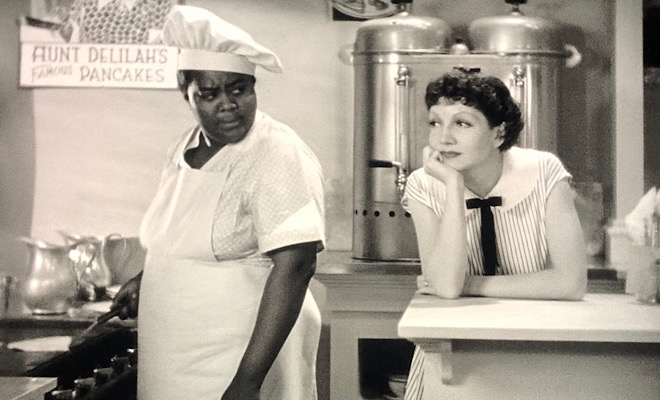 Widowed mother Beatrice Pullman (Claudette Colbert), who makes a meager living peddling her late husband’s maple syrup, takes in the homeless Delilah Johnson (Louise Beavers), a spirited and nurturing black woman with a light-skinned daughter named Peola, to help with domestic chores and look after her daughter Jessie. The two women quickly forge an unbreakable bond (as do the little girls), and when Bea tastes Delilah’s scrumptious secret-recipe pancakes, she smells a marketing bonanza.

Though Bea lacks any business experience, she rents a ramshackle storefront on the local boardwalk, renovates it, opens a restaurant, and before anyone can say Aunt Jemima, she and Delilah have a gold mine. As the years pass, though, their dizzying success becomes tempered by Peola’s rejection of both her race and her mother, whom she blames for continually thwarting her attempts to pass for white, and Jessie’s infatuation with Bea’s boyfriend, Stephen Archer (Warren William). Both women try to do what’s best for their daughters, but their decisions produce plenty of stress and heartache. 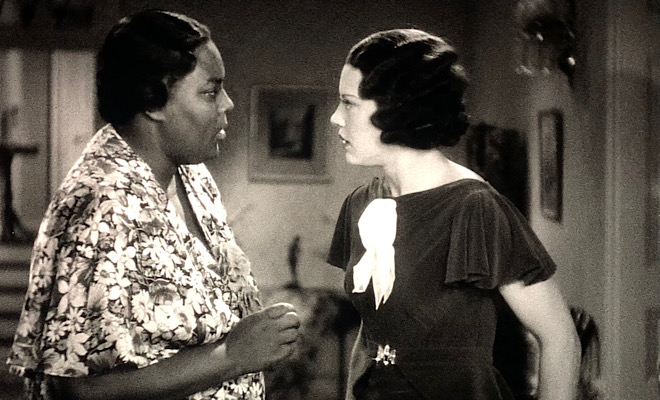 In addition to shedding light on the issue of passing, the 1934 version of Imitation of Life (which received a Best Picture Oscar nomination and more faithfully follows Hurst's novel than the 1959 remake) broke significant ground in its depiction of a deep, lasting friendship and business partnership between a white and black woman and by affording a black character almost as much screen time as the film’s white star. Society’s color barrier certainly constricts each woman’s actions and habits within the story's framework - and Stahl doesn’t shrink from subtly pointing out the injustices - but it never interferes with their intimacy, which is both natural and touching. A few cringe-inducing moments of racial insensitivity do crop up, but it’s important to remember Imitation of Life reflects the time period in which it was made, and we must view it from that perspective, however uncomfortable it may be.

Colbert files a disarmingly unaffected and beautifully modulated performance that carries the film. 1934 proved to be a big year for the actress, who also played the title role in Cecil B. DeMille’s epic Cleopatra and won an Oscar for the classic romantic comedy It Happened One Night, yet despite Colbert’s vibrant and endearing presence, Beavers and Fredi Washington, who plays the grown-up Peola, steal the picture. Each contributes a flawlessly etched character portrait, full of heart and pathos. Like many black actresses of the era, Beavers spent the bulk of her career playing domestics (“I’d rather play a maid than be one,” she famously quipped when criticized for accepting subservient roles), but here she’s on equal footing with Colbert and seizes the moment. 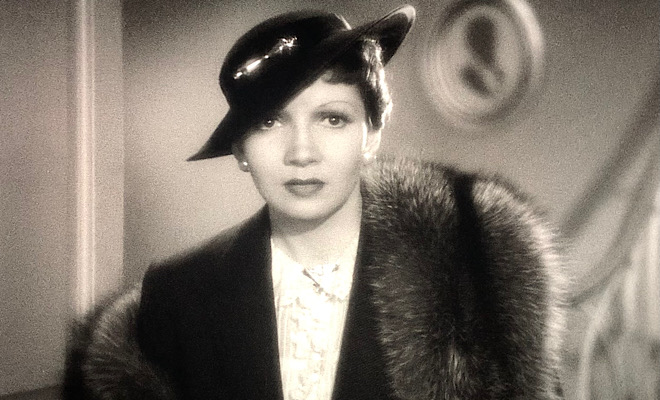 Washington is equally good and, in a strange twist, lived the part of Peola in reverse off screen. Several movie moguls guaranteed Washington the same type of major stardom Norma Shearer, Joan Crawford, and Greta Garbo enjoyed if she would only pass herself off as white, but she steadfastly refused to denounce her heritage. As a result, her career slowly fizzled, largely because she wasn’t considered black enough to be cast in traditional African-American roles.

In this era of pride and acceptance, Imitation of Life seems antiquated, yet despite its soap opera trimmings, it remains an important historical document of a specific period when a large segment of the American population didn’t respect the word “equality.” The term “Black pride” wasn’t coined until the 1960s, but it’s hard not to think Hurst’s story - in some small way - helped lay the groundwork for the movement. Though not a great film, Imitation of Life makes important points, and for that reason - as well as its substantial entertainment value - it deserves to be seen, analyzed, and discussed. 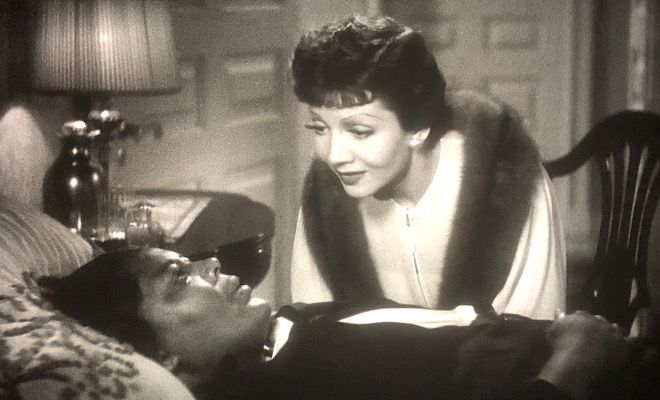 Vital Disc Stats: The Blu-ray
The Criterion edition of the 1934 version of Imitation of Life arrives on Blu-ray packaged in a standard Criterion case. A 12-page fold-out booklet featuring an essay by author Miriam J. Petty, an associate professor in the department of Radio/Television/Film at Northwestern University, several black-and-white scene and publicity stills, a cast and crew listing, and transfer notes is tucked inside the front cover. Video codec is 1080p/AVC MPEG-4 and audio is LPCM mono. Once the disc is inserted into the player, the static menu with music immediately pops up; no previews or promos precede it.

According to the liner notes, "This digital restoration by Universal Pictures Home Entertainment was created in 4K resolution on an Oxberry film scanner from a 35 mm nitrate composite fine-grain from the Library of Congress and a 35 mm silent safety duplicate negative." The resulting 1080p/AVC MPEG-4 transfer looks very much the same as the transfer that appeared on Universal's 2015 Blu-ray that also housed the 1959 remake. The major difference here is the bitrate, which is substantially higher on the Criterion disc. While the bitrate on the 2015 Blu-ray fluctuated wildly but averaged around 25, the Criterion disc clocks in consistently around 35. Consequently, clarity and contrast are more pronounced on the Criterion disc, but the underlying image remains the same.

As I wrote in my 2015 video review, "The 1934 edition flaunts a lovely grain structure that replicates the feel of celluloid, but never appears overly textured. Contrast and clarity are excellent, and any age-related marks or scratches have been meticulously scrubbed away, leaving a practically pristine image that's a joy to watch from beginning to end. Black levels are rich and deep, whites are bright yet stable, and a nicely varied gray scale enhances details and depth. Close-ups are appropriately lush and glamorous, especially those of the beautiful Colbert, and no artificial sharpening or noise reduction could be detected." All of that applies to the Criterion disc as well; it's just slightly more vibrant and pleasing. Universal's 2015 transfer earned 4-1/2 stars, and though the Criterion transfer slightly ups the ante, the bitrate improvement isn't enough to change that rating.

The liner notes are surprisingly sparse regarding the audio transfer, with Criterion tersely stating, "Additional audio restoration was performed by the Criterion Collection." Despite that assertion, the LPCM mono track sounds exactly the same as the DTS-HD Master Audio 2.0 mono track that graced the 2015 disc. What I wrote about the audio in 2015 still holds true today. Back then, I praised the track for providing "clear, well-modulated sound. Though some faint surface noise occasionally can be detected during quieter moments...no hiss, pops, or crackles ever intrude upon the narrative. A few bits of dialogue are difficult to make out, but most exchanges are easy to understand, and Heinz Roemheld's sparingly employed score lacks the tinny overtones that often afflict music in antiquated films. Ambient effects, such as rain, are nicely integrated into the track, and the dynamic scale is wide enough to keep any hints of distortion at bay." The 2015 audio earned 4 stars and the additional restoration Criterion performed isn't significant enough to raise the score.

Criterion's rather skimpy supplemental package includes a new introduction to the film and new interview that examines the work of Beavers and Washington, along with a rare trailer. None of the extras from Universal's 2015 Blu-ray release (which also included the 1959 remake starring Lana Turner) have been ported over to this Criterion release.

The 1934 edition of Imitation of Life remains unabashedly sentimental, but this time-honored tale of two very different mothers, their complex relationships with their respective daughters, and their devotion to each other possesses more depth than meets the eye. Thought-provoking statements about racial imbalance, identity and self-worth, feminism, and ambition are deftly woven into a heart-tugging story that's somewhat stymied by the constraints of its era. Claudette Colbert shines in a glamorous part, but Louise Beavers and Fredi Washington are the heart and soul of this vintage film, and their memorable portrayals transcend its soapier aspects. Criterion's Blu-ray presentation slightly improves upon Universal's 2015 release, but unless you're a rabid devotee of Imitation of Life, the video and audio enhancements aren't substantial enough to merit an upgrade. That said, if you don't yet own this Golden Age classic, this is the edition to get. Highly Recommended.