The modern Halloween trilogy has ended as director David Gordon Green and Danny McBride take that final stab at their vision of this beloved franchise that started in 1978. Halloween Ends was supposed to pit Laurie Strode (Jamie Lee Curtis) and her nemesis Michael Myers against each other for the ultimate, no-holds-barred steel cage match full of violence and blood, but instead, this third and final film came across like a made-for-tv-movie where Michael Myers only showed up for a few minutes. Through one of the worst scripts ever written, terrible performances, and a lackluster murderous rampage, Halloween Ends is an ugly way to go out, not with a bang, but with a whimper. Skip It!

Now in Theaters and Streaming on Peacock

Fair Warning - this review contains spoilers because well, there just isn't any way to really discuss this movie without going into details.

Some time has passed since Halloween Kills and all seems peaceful and right in Haddonfield. Laurie Strode has reverted back to her original way of clothing with dresses and blouses and has even fixed her hair nicely. She lives with her granddaughter as the town of Haddonfield is somewhat back to a place of normalcy. There is still talk of the boogeyman, but come to find out an hour into the film with the first peak at Michael Myers, who has been living like a Ninja Turtle in the sewers, he's never left Haddonfield. McBride and Green have decided that since Michael Myers hasn't murdered anyone in many years, his evil power has made him a crippled old man, but once he murders, his powers are restored. It's an eye-rolling scene indeed. 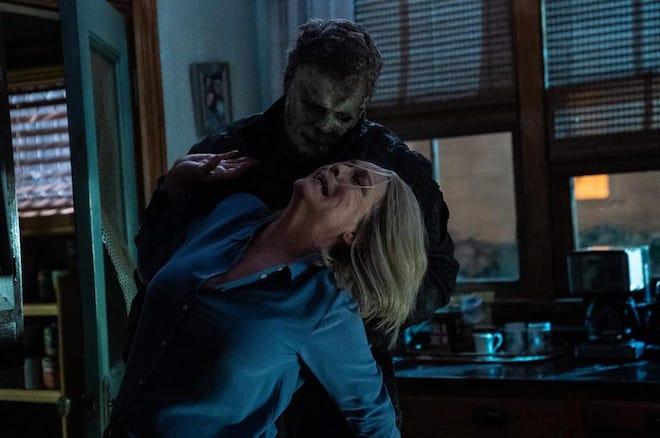 To make matters worse though, Halloween Ends doesn't cover Michael Myers whatsoever, but rather a guy named Corey, who is babysitting a rotten child he accidentally kills in the first scene. It's clear from here that Corey might take on the mantle of the new Michael Myers label. His run-ins with the townspeople and even his own mother are a horror story where everyone is comically mean and rude to him, bearing no resemblance to the real world. It's with this hate that he wants to inherit Myers's power somehow, but his crush on Laurie's granddaughter has him thinking twice.

If there was ever an undertone or theme to this film, it would be how to deal with grief over a few decades, but McBride and Green wrote in a line for Curtis to yell about shaking her breasts at bad things. It's these elements that make Halloween Ends an unfunny mess that doesn't entertain, but instead, annoys and let-down. There is one great kill that involves a record player turntable, and the final climactic fight between the two original characters has some decent elements, but at the end of the holiday, there's not much to really like here except for John Carpenter's brilliant score.

This is not the end of Halloween films forever, but hopefully, at some point, some more capable writers and filmmakers will bring back Michael and tell a better story that doesn't feel cheap or something that would air on the Discovery Channel. Halloween Ends is a complete and utter mess of a film that does not deliver the goods. Skip It.

Now in Theaters and Streaming on Peacock