Idris Elba is in the fight for his life as a rogue lion attacks his family in Beast. A little less CGI and some tighter editing would have done wonders for this overly silly and sadly bland man-vs-animal survival flick. Universal Home video captures this Beast on Blu-ray with a middling-but-effective transfer, one heck of a great audio mix, and an assortment of bonus features. Worth A Look

For Nathan Samuels, a trip to a preserve in South Africa was supposed to be a nice vacation and a chance for him to reconnect with his daughters Norah (Leah Jeffries) and Meredith (Iyana Halley) after the death of their mother. With his old friend Martin (Sharlto Copley) as their guide, Nathan was hoping to show his daughters the area where he met their mother. As tensions strain the already wound relationship, a rogue blood-thirsty lion is on the rampage, killing everyone it encounters. Without weapons, food, or enough water, Nathan will have to find a way to survive long enough to get his daughters to safety. 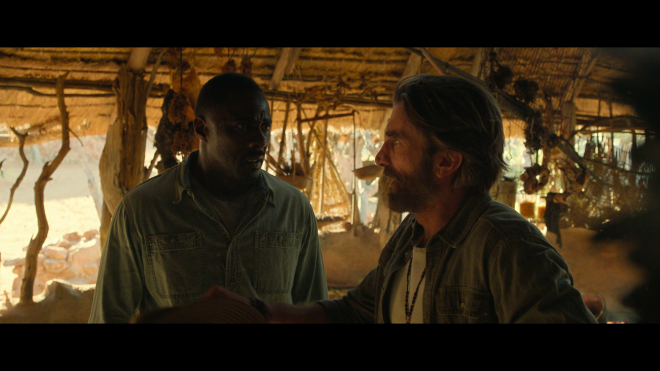 Part of the problem facing Beast is that it’s just too busy trying to look flashy. Director Baltasar Kormakur and his team work overtime to craft overly elaborate single-take sequences that are supposed to build tension but do the opposite. With some pretty obvious CGI trickery to stitch takes together, these scenes just feel flat and lifeless, even with Elba and Copley working their tails off to sell any sense of terror or shock, but the audience is well ahead of these guys. A scene where they find a village that has been destroyed by the lion with dozens of mauled bloody dead people should have been terrifying, but it just felt sluggish. Keeping the take going for a long single shot without cutting made this discovery obvious and cliche instead of suspenseful or scary.

And then there’s the CGI lion. I get it, you can’t do what they pulled off with The Ghost and the Darkness these days, but even with a costumed human stand-in to give the actors something to play off, the effects still look weightless. When Elba is trapped under a disabled truck and the lion is trying to dig him out, you can see and feel that his attempts to fight back are just hitting empty air. It’s a frustratingly unengaging experience and scenes like this happen again and again throughout the short run of the film. 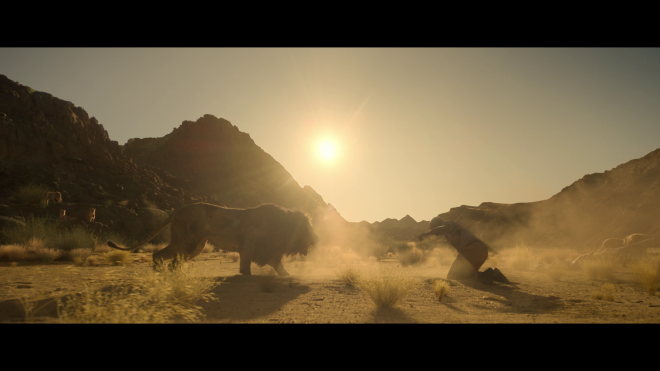 At just over 90-minutes Beast feels both too long and too short. We’re given very little time to actually feel for Nathan and his family. The reasons his daughters are having a tough time reconnecting with him are fleshed out in the slimmest way possible. In fact of all the characters we’re supposed to root for, Sharlto Copley’s Martin is the only one that feels fully fleshed out. He’s a preserve warden, he’s got a relationship with a pair of male lions he rescued as cubs, and he may or may not be an anti-poacher. Instantly likable, the film could have just been him in a disabled truck having to fight to get back to safety and it would have been a much more interesting and fulfilling film. You could have had Elba play Martin and again, if it had just been him fighting to survive, it could have been a hell of a flick. But the tacked-in family drama just feels hacky and leads to supposedly smart characters doing really stupid things at very inconvenient moments.

Vital Disc Stats: The Blu-ray
Universal Home Video unleashes Beast onto Blu-ray in a two-disc Blu-ray + DVD + Digital Collector’s Edition set. Pressed on a region-free BD-50 disc, the disc is housed in a standard two-disc case with an identical slipcover. The disc loads to trailers for other Universal releases before arriving at a static image main menu with basic navigation options and the bonus features menu along the right side of the screen. 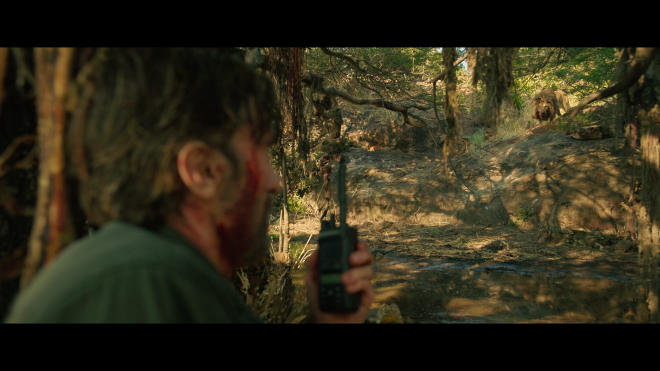 Beast takes a bite out of Blu-ray with an overall decent 2.39:1 1080p transfer. And I say decent because there are a few hiccups keeping this release from greatness. The first issue is a bit of an oddity. The film was shot digitally but it looks as though either some kind of grain filter was used, or worse, there is a hell of a lot of digital noise, and it’s especially distracting during night sequences. The opening night attack where the lion takes out one poacher at a time like some kind of silent assassin is particularly dodgy looking. Things improve greatly during daylight scenes - which is the bulk of the film. Details are much stronger and clearer. Colors look great favoring the earthy yellow/brown tones and the shadow details are right on point. But again, once the film moves to night scenes, problem spots come roaring back. 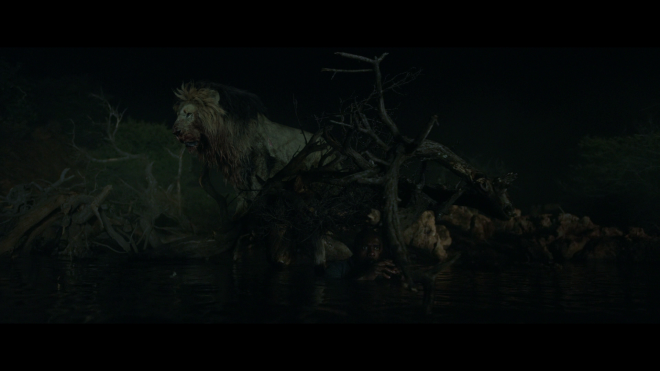 While the video transfer has its iffy moments, this DTS-HD MA 7.1 track is fantastic. From start to finish there’s plenty of imaging throughout the mix even in the quietest scenes there’s near-constant channel activity. Obviously, the best bits are when that CGI lion is attacking and crashing into cars or the bush. The front/center, side, and rear channels get plenty of working time. Throughout the show, dialog is clean and clear without issue. Ambient atmospheric elements do a great job of providing a sense of space and dimension so as our little band of survivors moves from one location to the next it sounds unique. 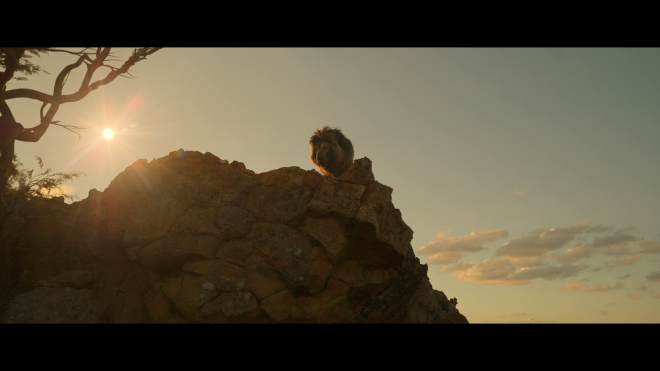 For this release of Beast, the disc comes with some interesting bonus features. It’s clear from each little featurette that a lot of time and effort went into crafting this picture from getting the CGI effects right to creating a village from nothing, it certainly wasn’t a cheap show. A lot of these featurettes have quite a bit of talking head EPK stuff, but there are some worthwhile nuggets in there. 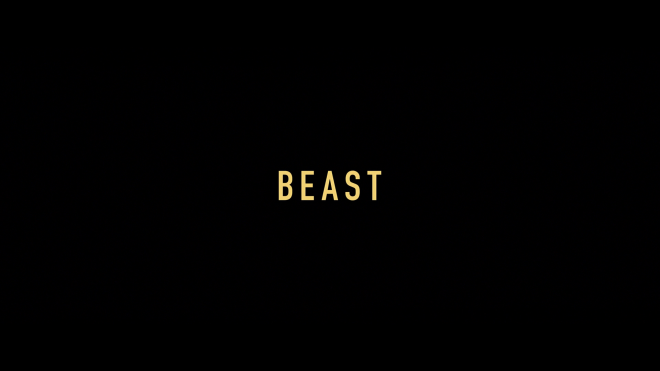 I went into Beast without seeing a trailer or reading any reviews, only knowing the concept that Idris Elba would pull a Scott of the Antarctic from Monty Python and fight the lion. At the end of the day, this movie just didn’t do it for me. I wanted to like it and be entertained by it, but it just proved to be a pretty long 90-minutes with only small fits and spurts of excitement.

Universal unleashes Beast onto Blu-ray with a transfer that at times can look terrific but isn’t a peak example for the format. Thankfully the audio track picks up its share of the load for a dynamic sonic experience. Bonus features may not be very long but there’s some information in there worth checking out. All in all, I’d hoped for better. I know some folks probably won’t be as nitpicky as I am so on that scale this flick is at least Worth A Look