Look up "intensity" on your dictionary app, and if there isn’t a picture of Kirk Douglas next to the definition, there should be. The chiseled actor with sandy hair, blazing eyes, and a cavernous chin cleft carved a career out of portraying angry, anguished, and rebellious characters who often feel like a square peg in society's round hole. Always a magnetic screen presence, Douglas fearlessly brandishes emotion while maintaining an intrinsic virility that attracts both women and men, and in director William Wyler’s Detective Story, he brings his "A" game. Douglas pumps Det. Jim McLeod so full of angst, bitterness, revulsion, and self-righteousness, he looks primed to bust a gasket at any moment.

Based on the acclaimed play by Sidney Kingsley, Detective Story chronicles a day in the life of New York's fictional 21st Precinct and details how the cases on McLeod's plate not only push him to the breaking point, but also force the cocky detective to confront both external and internal demons. His lieutenant (Horace McMahon) sarcastically calls him "a one-man army against crime," yet McLeod lives and breathes law enforcement, passionately pursuing offenders and chiding his colleagues for coddling them.

Known to rough up suspects on occasion, McLeod is ordered to treat Karl Schneider (George Macready), an unscrupulous "doctor" with ties to a black market baby ring, with kid gloves. (In the play, Schneider is an abortionist.) McLeod complies at first, but when the case collapses, he flies off the handle and physically attacks Schneider. The assault angers Schneider's lawyer (Warner Anderson), who responds by dropping hints about a long-ago connection between Schneider and McLeod's wife, Mary (Eleanor Parker). The innuendoes lead to shocking confessions and revelations that threaten McLeod's marriage and jeopardize his status in the department. 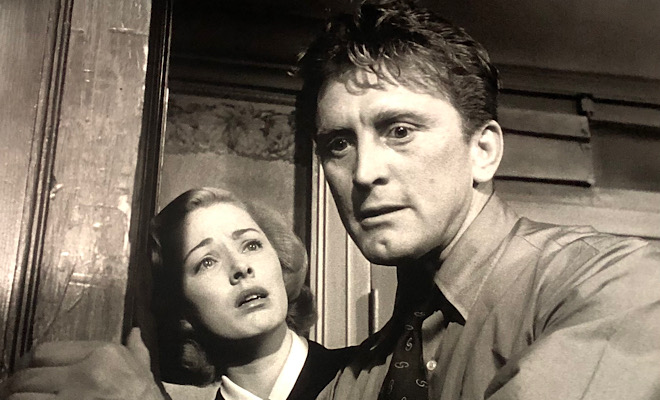 Abortion was a favorite subject of Kingsley (he also explored the issue in his 1933 Pulitzer Prize-winning play Men in White), and though the Hollywood Production Code prohibited the movie from addressing the topic by name, the inference comes through loud and clear. As a result, Detective Story espouses a powerful social message that goes far beyond the crime-doesn't-pay moralizing of most police dramas of the period. The film also treats premarital sex with surprising frankness and seamlessly weaves the tales of a shoplifter (Lee Grant), embezzler (Craig Hill), and serial burglar (Joseph Wiseman) into its tightly-knit fabric. (All of them may be thieves, but their personalities and motivations couldn't be more diverse.) Though police brutality wasn't much of an issue then, it sure is now, and that aspect of the plot both strikes a nerve and keeps the movie relevant in our current day and age.

A precursor to TV cop shows like Hill Street Blues and NYPD Blue, Detective Story brilliantly depicts the grimy atmosphere of an inner city precinct and how the jaded, overworked officers juggle desk-work drudgery, pointed interrogations, and the emotional outbursts of various criminals. By dovetailing petty and serious cases featuring an offbeat cast of felons, the Oscar-nominated script by Wyler’s brother Robert and Philip Yordan creates a rhythmic ebb and flow to this daily grind that crescendos to a powerful climax. 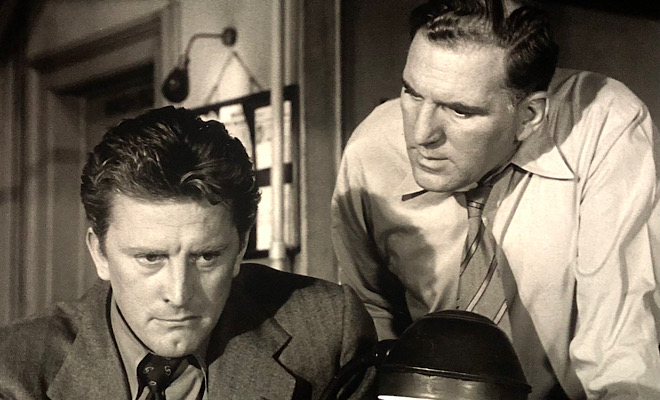 Substantive, character-driven stories always attracted Wyler, so it's tough to imagine another director better suited to the material. (Only Elia Kazan, who spent the same year crafting A Streetcar Named Desire for the screen, comes to mind.) Wyler, who also helmed the film version of Kingsley’s Dead End in 1937, wisely clings to the drama's stage roots; with few exceptions, he confines the action to a single set, heightening the emotional timbre and maintaining a claustrophobic feel throughout. In addition, he conveys a gritty realism (punctuated by the lack of a music score) and eschews any noticeable technique in favor of doing what he does best - milking raw, riveting performances from his actors.

Much to his dismay (and ours), Douglas didn't garner an Oscar nomination for his blistering portrayal of a man held hostage by his implacable principles. Douglas filed plenty of great performances over the course of his long career, but even his turns as Vincent Van Gogh and Spartacus struggle to eclipse his gutsy work here. Like a bungee jumper, he dives into the role, unafraid to paint McLeod as an arrogant, holier-than-thou prick. With a grin that always seems to mask a snarl, a deeply penetrating gaze, and turmoil churning inside him like a nasty case of reflux, Douglas, as always, comes dangerously close to going over the top, but reins himself in just before he falls off the precipice. 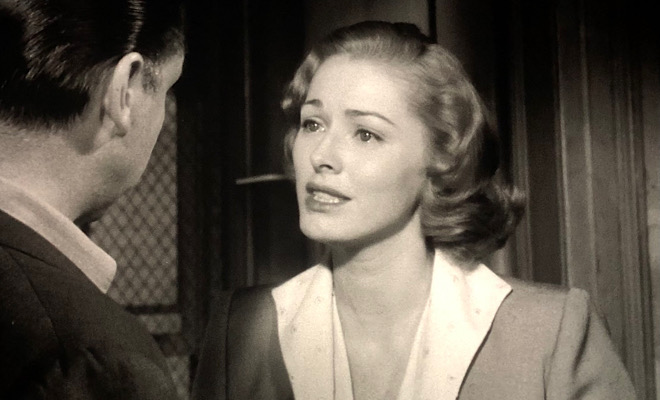 The Academy did deservedly honor Parker with the second of her three career Best Actress nominations, though she would lose that year's award to Vivien Leigh's Blanche DuBois. Best known as the bitchy baroness in The Sound of Music, Parker crafted many more complex and demanding portrayals, yet today's audiences often forget those accomplishments. In Detective Story, she takes a relatively small role and makes an indelible impression, beautifully conveying Mary's shame, regret, and disillusionment as her secret is revealed. It's a shattering performance, and her crackling chemistry with Douglas makes it all the more moving.

Twenty-four-year-old Grant, who would survive Hollywood’s blacklist and win an Oscar for Shampoo a quarter of a century later, also nabbed a nomination - in her very first film - for reprising the role she created on Broadway. (At times, her facial expressions, mannerisms, and speech patterns eerily resemble those of her daughter, actress Dinah Manoff, when she was the same age.) The portly William Bendix (as McLeod's sympathetic, level-headed colleague), Wyler favorite Cathy O'Donnell, the always colorful Gladys George, and the deliciously slimy George Macready round out the stellar cast. 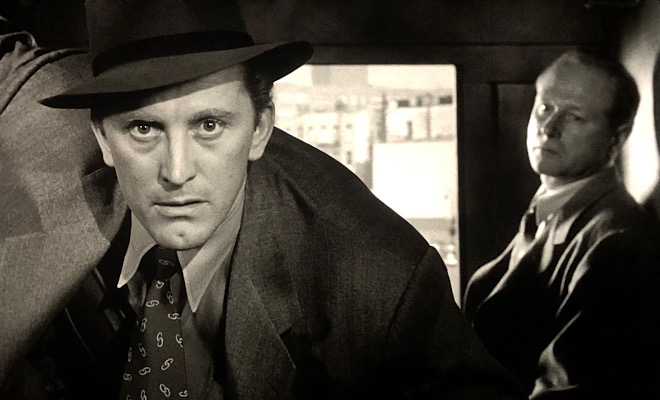 A searing character study distinguished by fine acting and adult themes, Detective Story is a welcome departure from the cops-and-robbers shoot-'em-ups Hollywood so fervently recycled during its Golden Age. Few actors command the screen with as much authority as Douglas, and his memorable portrayal gives this juicy film its bite.

Vital Disc Stats: The Blu-ray
Detective Story arrives on Blu-ray packaged in a standard case. Video codec is 1080p/AVC MPEG-4 and audio is DTS-HD Master Audio 2.0 mono. Once the disc is inserted into the player, the static menu with music immediately pops up; no previews or promos precede it.

The Detective Story DVD looked darn good back in 2005, but Paramount has upped the ante for this Blu-ray release, fashioning a brand-new HD master from a 4K scan of the original camera negative. The resulting 1080p/AVC MPEG-4 transfer adopts a grittier appearance that faithfully honors the naturalistic cinematography of Oscar-winner Lee Garmes. Superior clarity and contrast and more pronounced grain produce a very film-like picture that highlights all the fine details of the dirty, cluttered, rundown precinct. While deep blacks, bright, stable whites, beautifully varied grays, and solid shadow delineation immerse us in the stark urban atmosphere, sharp close-ups supply essential intimacy that enhances the narrative's power. Glistening sweat, stubble, tears, the blemishes and chin cleft on Douglas' face, and Parker's alabaster complexion are all well defined, and though a few scenes exhibit some softness, the transfer remains quite consistent throughout.

The Blu-ray looks darker and richer than the DVD, but surprisingly, there's more visible print damage on the Blu-ray. Faint white scratches, a few blotches, and some mild speckling - all of which are more prevalent in the film's early stages - snag some fleeting attention, but the positive elements of this remastered transfer ultimately outweigh such negatives. If you're a fan of this blistering drama, an upgrade is certainly in order, especially when you factor in the lossless audio track.

The DTS-HD Master Audio 2.0 mono track supplies clear, well-modulated sound that's free of any age-related hiss, pops, and crackle. The lack of a music score (except for the opening and closing credits) puts more focus on subtle effects and sonic accents, and both make solid impressions. The tapping of typewriter keys, slamming doors, creaky floorboards, motorcycle engines, street noise, and gunfire are all crisply rendered, pregnant pauses are clean, and the all-important dialogue is well prioritized and easy to comprehend. Nuanced soundtracks often wear their imperfections on their sleeves - especially when they're more than 70 years old - but this fine effort immerses us in the harsh environment and never breaks the hypnotic dramatic spell.

A solid audio commentary and bunch of trailers round out the disc.

A cop chronicle for the connoisseur, Detective Story features taut direction from William Wyler, great ensemble acting by a first-rate cast, and another intense Kirk Douglas performance. A brand-new HD master struck from a 4K scan of the original camera negative, solid audio, and a top-notch commentary track distinguish Kino's Blu-ray presentation of this richly textured, often riveting adult drama. Though not a huge step up from the 2005 DVD, this Blu-ray boasts enough enhancements to merit an upgrade. Highly Recommended.