When you need to market a movie, there’s no better way to shill your flick than tag Edgar Allan Poe in the title! With 1989’s Buried Alive we see a number of Poe themes squished together for a ghastly gothic slasher flick complete with some impressive gore effects, John Carradine’s final performance, and Robert Vaughn. The film may not be great, but warts and all it’s a fun bit of viscera. Vinegar Syndrome gives this rental shop and late-night cable classic a fitting Blu-ray release with a new 2K restored transfer, decent audio, and some nice bonus features packed in. For Fans Only

Something terrible is happening at the all-girls reform school of Ravens Croft. New teacher Janet (Karen Lorre) has just taken a post at the school alongside the enigmatic headmaster Gary Julian (Robert Vaughn) and Dr. Schaeffer (Donal Pleasence). When some of the more “troubled” girls go missing and Janet is haunted by terrible visions in her dreams, Gary quickly dismisses her concerns. As Janet starts to look into the history of the school, she soon learns of the deep, dark, and terrifying secrets buried within its walls. 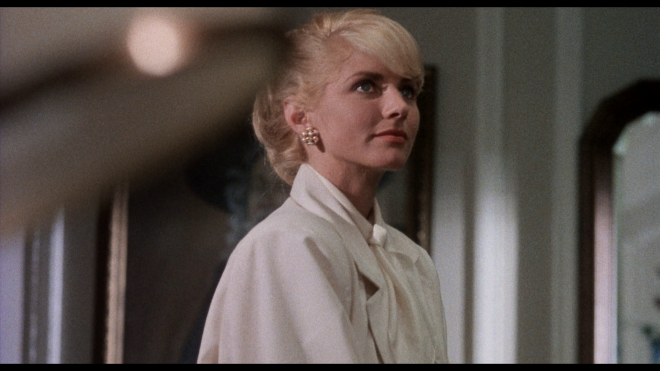 “Loose” is an albeit loose word to describe any basis for Poe’s work with Buried Alive. While there are themes and overtures to several of Poe’s gothic works nestled within the film, outside of some plot beats found in Poe’s The Black Cat, there’s nothing of a particular single story this film can lay claim to as an adaptation. Even that tie to The Black Cat is pretty thin. But that’s movie marketing. Slap Poe’s name on a title and you give your film some sense of literary legitimacy, enough so to confuse at least one sixth-grade English teacher in rural Michigan!

My introduction to this movie wasn’t a movie rental shop or a late-night cable channel, it was because my well-meaning sixth-grade English teacher was trying to entertain raging teenage kids during a cold October as we worked through a segment on Poe. She thought if we read the stories and then watched the movies it could catch our attention and open up some discussion. Sadly she kept renting the wrong movies. I guess she didn’t pay attention to the ratings on the boxes because between Buried Alive and 1989’s The House of Usher, she picked a couple of real doozies to try to show to a bunch of 12 and 13-year-olds! Eventually, she finally found some of the classic and a little more age-appropriate1960s Corman flicks and it all turned out well. 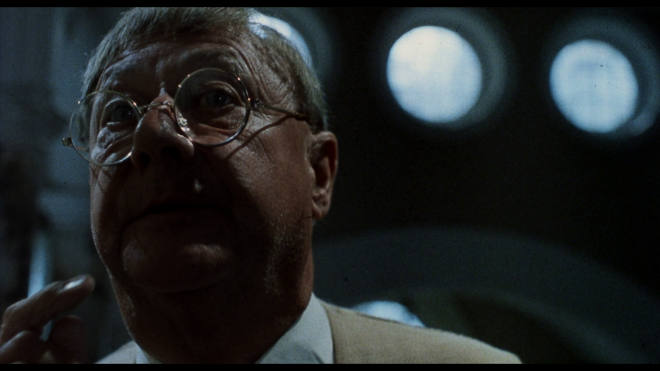 I bring up this story only because Buried Alive just isn’t very good. I remember almost being shown this film in school more than I remember any particular single viewing. Gerard Kikoine directing from a script by Jake Clesi and Stuart Lee aims to give the film some energy but with clunky exposition sequences and just a flat confusing editing job, the film makes little sense as it lumbers from one ghastly and gory kill to the next. And those kills are impressive – I’ll never look at a hair dryer and an electric mixer the same way ever again! But slasher gore and some iconic character actors and an early role for Arnold Vosloo is about all this film has going for it.

While the film features veterans like Donald Pleasence and Robert Vaughn, their talents are largely wasted here. They’re professionals and give it what they’ve got by dialing up their performances to match the gonzo energy of the piece, but they’re not enough to salvage a rather bland entry in the slasher sub-genre. If there’s a standout to be seen it’s the final turn from the legendary John Carradine who almost literally worked until the day he died. This is his final performance (even though Jack-O was released in 1995, his scenes were shot 1985), and he’s as wild and spirited as ever! Come for the gore, stay for Vaughn, Pleasence, and Carradine. And young Arnold Vosloo too.

Vital Disc Stats: The Blu-ray
Buried Alive digs itself up a new Blu-ray release thanks to Vinegar Syndrome. Pressed on a BD-50 disc, the disc is housed in a standard clear case with reversible artwork and if you order from Vinegar Syndrome you score a slick new custom art slipcover. The disc loads to an animated main menu with standard navigation options along the bottom. 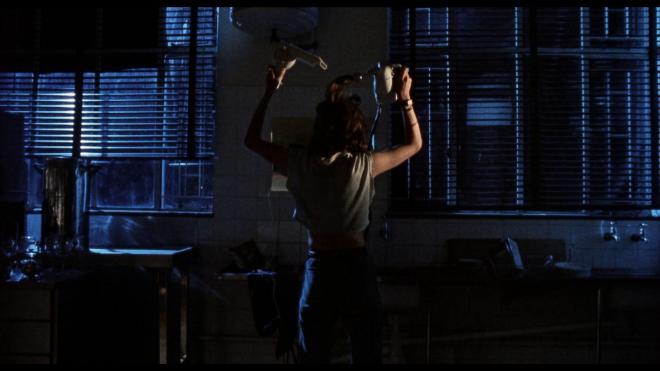 Scoring a new 2K restoration from the 35mm interpositive, Buried Alive shows off an often impressive 1080p 1.85:1 transfer. Details are clean and clear allowing you to appreciate the impressive production design work of the school, those late 80s early 90s fashions, facial features, and the ample gore effects! Film grain is healthy and well, it can be a bit noisy in some places and lighter in others, but nothing overly distracting or detrimental. Colors are bright and vivid with some strong primaries, considering all the gore red gets plenty of attention. Black levels are a bit thick in places but don’t quite drift into crush but are precariously close. Elements are in overall good shape but there is still some age-related wear with speckling and some slight scratches. 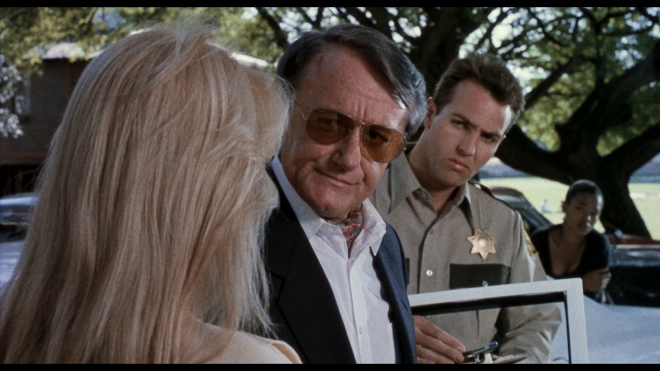 This release rolls with a respectable DTS-HD MA 2.0 mono track that covers the bases nicely. Dialog is clear throughout, but it also has a bit of a disembodied quality as if most of it was recorded in post-production. Sound effects are active enough to give a sense of imaging and space to the locations. Scoring by Frederic Talgorn is solid stuff but it can feel mixed a little high in spots. Overall this mix works and gets the job done.

This release of Buried Alive is supported by a pair of cast interviews with Ginger Allen and William Butler. Both are nice watches as they seem to remember the film fondly enough and offer up some interesting tidbits, but at the same time, there’s not a lot here. 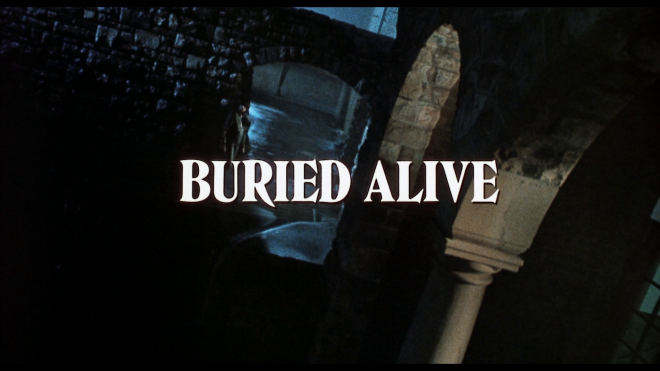 Buried Alive may have the slimmest of slim connections to Edgar Allan Poe’s classic literary works, but it turns out to be a pretty fun slasher - even if it doesn’t really make a whole lot of sense. What we have here is a great cast burning time, cashing a paycheck, with ample gore to splash around. Vinegar Syndrome digs up Buried Alive for a solid Blu-ray debut scoring a respectable A/V presentation, and a pair of interviews to round out the slim set of bonus features. This one really will only appeal to a select few interested in this grand gothic piece of schlock horror. For Fans Only