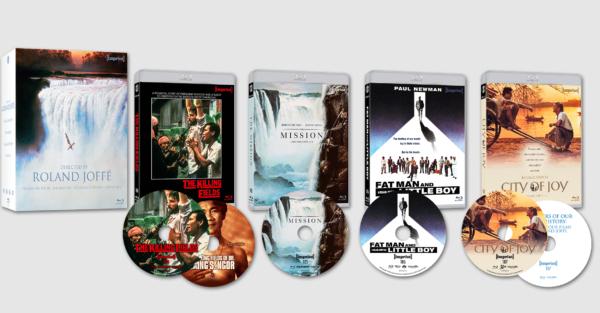 Award-winning director Roland Joffé produced some of the most cinematic work of the 1980s and beyond. This special edition collection celebrates four of his visionary works. Each film is complemented with audio commentaries, interviews & documentary features and once again shines the spotlight for audiences new and old to re-discover these cinematic achievements.

The true story of journalist Sidney Schanberg (Sam Waterston) who is a New York Times journalist assigned to Cambodia, and assisted in his efforts by local representative Dith Pran (Dr. Haing S. Ngor). When Phnom Penh falls to the Khmer Rouge two years later, Dith Pran helps Schanberg escape but must himself remain behind. When the Khmer Rouge captured Phnom Penh in 1975, many thought the killing would end. Instead, it started a long nightmare in which three million Cambodians would die in the “killing fields.”  Back in New York, Schanberg begins to draw up plans for how he might rescue his friend.

A feature-length documentary by Arthur Dong, this moving film explores the life and experiences of Dr. Haing S. Ngor who was forced into the brutal labor camps by the Khmer Rouge. Years later, he will recreate his experiences in the film “The Killing Fields” which won him an Academy Award for his performance.

Sweeping and visually resplendent, The Mission is a powerful action epic about a man of the sword (Robert DeNiro) and a man of the cloth (Jeremy Irons) who unite to shield a South American Indian tribe from brutal subjugation by 18th-century colonial empires. It reunites key talents behind The Killing Fields: co-producer David Puttnam, director Roland Joffé and cinematographer Chris Menges.

In the best performance of his career, Patrick Swayze stars as Max Lowe, a disillusioned surgeon who travels to India after a young patient dies on the operating table. But Lowe’s determination to quit medicine is challenged when he meets a committed British nurse who runs a free clinic in Calcutta’s most dangerous neighbourhood. And when her clinic – and the livelihood of her neighbours – is threatened by the brutal local “godfather”, Max teaches the impoverished Indians the strength of their own unity.

Bonus Disc – “Prisoners of Our Own History: The First Four Films of Roland Joffé (2022)

An intimate all NEW feature-length documentary with director Roland Joffé from Ballyhoo Pictures. Exclusive to this limited edition box.