Top-notch production values, a stellar cast, and plenty of atmosphere distinguish Mark of the Vampire, an antique horror curio that features one of the genre's most bizarre plots. Lionel Barrymore, Elizabeth Allan, vampire extraordinaire Bela Lugosi, Lionel Atwill, and Jean Hersholt give the quirky material their all and Warner Archive honors their stalwart efforts with a dazzling transfer struck from a 4K scan of the original nitrate camera negative. Excellent audio and a solid supplemental package sweeten this superior Blu-ray presentation of a captivating, yet head-scratching genre classic. Recommended.

Universal ruled the horror roost during the genre's heyday in the 1930s, but MGM was no slouch, mounting several respectable thrillers during that period that still merit attention. One of them is Mark of the Vampire, an atmospheric, supernatural whodunit that takes a head-scratching turn in its final 15 minutes that both sabotages the film and makes it a fascinating curio worthy of repeat viewings. Only director Tod Browning could pull off such a tricky sleight of hand (some might call it a cheat), and though all the puzzle pieces don't interlock upon closer scrutiny, Mark of the Vampire remains a fun, quirky ride, thanks to Browning's mastery of the form, MGM's top-notch production values, and an array of excellent performances.

When the wealthy father of Irena Borotyn (Elizabeth Allan) is found dead in the family's mansion deep in the heart of Eastern European vampire country, Police Inspector Neumann (Lionel Atwill) is dispatched to find the killer. A pair of bite marks on the neck of the victim's blood-drained body sparks panic in the spooked townspeople who live in perpetual fear of the undead. Neumann dismisses such hysteria, but when months of investigation don't yield any leads and both Irena and her fiancé (Henry Wadsworth) narrowly escape separate vampire attacks, he calls in vampire expert Professor Zelen (Lionel Barrymore) for assistance.

Zelen believes the key to the case lies in the legend of Borotyn Castle, which decades ago was inhabited by Count Mora (Bela Lugosi) and his daughter Luna (Carroll Borland), both of whom - according to lore - became vampires after their deaths. The two have been spotted skulking around the now abandoned castle as well as the estate of Irena's guardian, Baron Otto von Zinden (Jean Hersholt), where Irena has been living since her father's demise. Things get creepier when Irena begins hearing her dead father's voice outside her window at night and an expedition to her father's gravesite reveals an empty crypt. As Count Mora and Luna relentlessly stalk Irena, it's up to Zelen, Neumann, and von Zinden to hunt them down. 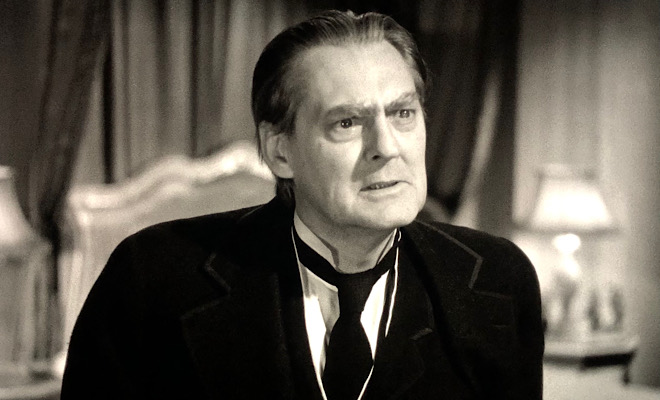 That all sounds like typical horror fare and Browning, who directed the original Dracula and MGM's controversial Freaks, does a fine job ratcheting up the tension, crafting a sinister atmosphere, and delivering a couple of jolts. He also sprinkles in some effective comic relief in the form of actress Leila Bennett as a jittery, fluttery maid who shrieks at the slightest provocation. Up until almost the end, Mark of the Vampire is a well-made, finely structured thriller. Then, out of nowhere, an audacious twist knocks the movie for a loop. Revealing it would deprive you of all the confusion, dismay, and disbelief I felt upon my first viewing, but love it or hate it, the narrative curveball certainly makes you sit up and take notice and entirely changes the movie's complexion.

Mark of the Vampire doesn't need a crazy gimmick to set it apart from other vampire flicks, and once you know the secret, it's tough to regard the film as anything but a comedy. It does provide Lugosi, who only has two lines and doesn't speak at all until the movie's final seconds, with a memorable and very rare self-deprecating moment, but whether the joke at the end justifies all that comes before it remains open for debate. Interestingly, Mark of the Vampire is a thinly veiled remake of Browning's own 1927 silent feature London After Midnight starring Lon Chaney. Sadly, that film is now lost, so we can't judge whether it handled the twist any better. 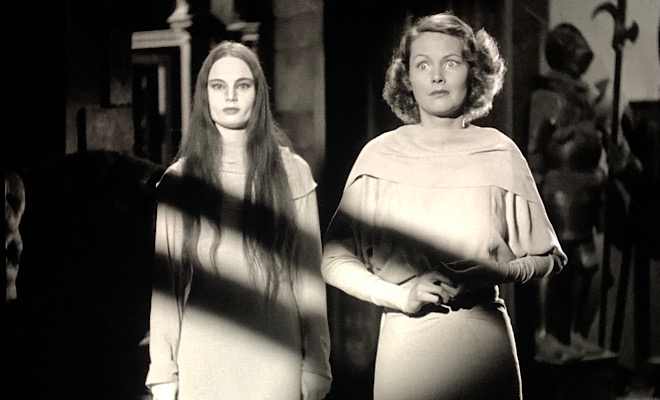 We also can't judge whether Mark of the Vampire would have been a better film if about 15 minutes hadn't been trimmed from its running time after initial previews. Clocking in at just 60 minutes, the movie has a choppy feel, as if chunks were lopped off and transitions were not repaired. Some of the story just doesn't make any sense at all. Character actress Jessie Ralph, perhaps best known as the beloved Peggotty in David Copperfield (released the same year), is billed eighth in the credits, but only appears fleetingly in the opening scene mumbling some frantic gibberish when her skirt snags on a rake. She must have had a more sizable part, and it's an open question as to whether the top-billed Barrymore did, too. His first scene comes a third of the way into the film and his entrance lacks the fanfare a star of his stature surely would have been given at the time, leading one to believe his character might have been introduced earlier in the original cut.

Despite its narrative holes - make that chasms - Mark of the Vampire still manages to entertain. Browning's artistic direction, MGM's impeccable craftsmanship (how many horror movies can boast art direction by Cedric Gibbons, costumes by Adrian, and cinematography by James Wong Howe?), and the colorful performances of Barrymore, Atwill, Hersholt, Allan, and Lugosi all combine to produce a slick, mostly satisfying film. If you're a fan of early horror fare, you'll enjoy it, warts and all. 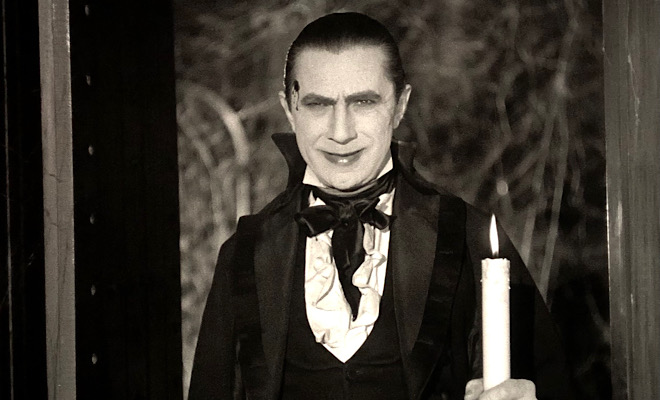 Vital Disc Stats: The Blu-ray
Mark of the Vampire arrives on Blu-ray packaged in a standard case. Video codec is 1080p/AVC MPEG-4 and audio is DTS-HD Master Audio 2.0 mono. Once the disc is inserted into the player, the static menu without music immediately pops up; no previews or promos precede it.

A brand new HD master struck from a 4K scan of the original nitrate camera negative yields a spectacular 1080p/AVC MPEG-4 transfer that beautifully showcases Browning's artistry, the opulent production design of Cedric Gibbons, and the gorgeous black-and-white cinematography of two-time Oscar winner James Wong Howe. Evident but not overwhelming grain heightens the eerie atmosphere and preserves the feel of celluloid, while excellent clarity and contrast create palpable depth and allow us to drink in all the details in the ornate mansion and decaying cellar where the vampires reside. Cobwebs, scraggly weeds, and bits of fine decor are distinct, and insect, rodent, and bat flesh (both real and artificial) are creepily crisp. A few scenes sport some softness, but that's to be expected in an 87-year-old film.

Rich blacks predominate, but bright white accents add striking highlights to the frame and combine with nicely varied grays to produce a silky, cohesive image that sustains the movie's mood. Shadow delineation is quite good, with only a few instances of crush cropping up, and sharp close-ups spotlight Lugosi's ghoulish makeup, Elizabeth Allan's loveliness, and the bushy mustaches of Jean Hersholt and Lionel Atwill. Topping it all off, nary a single nick or scratch mars the pristine source material, making this superior presentation of Mark of the Vampire a joy to behold from beginning to end.

The DTS-HD Master Audio 2.0 mono track delivers clear, well-modulated, and surprisingly vibrant sound for a mid-1930s movie. Sonic accents like screams and gunfire are crisp, while essential creepy atmospherics like chirping crickets, faint moans, and bat squeals subtly enhance the soundscape. A wide dynamic scale handles all the highs and lows of the dramatic background music without any distortion, all the dialogue is easy to comprehend, and only a faint amount of surface noise can be detected during isolated silences. Most movies from the early and mid-1930s are plagued with audio problems, but Warner Archive has meticulously cleaned up any deficiencies and presents a practically pristine track that sounds almost as good as the film looks.

Both the commentary track and trailer from the 2006 DVD release have been ported over to this Blu-ray edition, but Warner Archive adds a couple of additional vintage goodies to compensate for the movie's brief running time.

An atmospheric, creepy vampire movie until a misguided twist knocks it off the rails, Mark of the Vampire - despite its faults - stands as a testament to director Tod Browning's artistry and remains an elegant, oddly fascinating horror curio. Warner Archive's stunning transfer, which was struck from a 4K scan of the original nitrate camera negative, greatly enhances the film's appeal, while excellent audio and a nice spate of supplements make this Blu-ray presentation of an antique horror flick worthy of a purchase. Recommended.