Overview - Tom Hanks "gives one of the towering screen performances of all time" (New York Post) as Chuck Noland, a FedEx® systems engineer whose ruled-by-the-clock existence abruptly ends when a harrowing plane crash leaves him isolated on a remote island. As Chuck struggles to survive, he finds that his own personal journey has only just begun…
OVERALL
Recommended 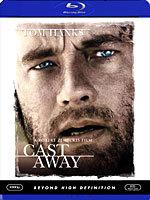 Isolation may just be the most unlikely of subjects to power a mainstream Hollywood blockbuster. Who wants to watch a man alone on a deserted island (even if he is Tom Hanks) for two-and-a-half hours? Yet as directed by Robert Zemeckis, 'Cast Away' is a movie that is at its most compelling when it accepts this challenge and runs with it. For most of its meditative 143-minute runtime (nearly 100 minutes of which occur virtually without dialogue), 'Cast Away' is absolutely riveting. It is a film that understands how time -- and our perception of it -- informs every single choice we make.

Hanks stars as Chuck Noland, a FedEx systems engineer who lives a ruled-by-the-clock existence. He runs his employees like racehorses, and seems to value time only if he can manage it -- even "quality time" with his lovely fiancee Kelly Frears (Helen Hunt) is something to be scheduled. But Chuck's managed life is about to come to an abrupt halt. After a spectacular plane crash sequence (which easily ranks as one of the scariest and most visceral in screen history), Chuck is left alone on a deserted island, with what would appear to be absolutely no hope for rescue.

'Cast Away' is a movie of contrasts -- between civilization and isolation, sound and silence, modern technology and antiquated technique. The film's second act is a huge risk for both Hanks and Zemeckis as we follow Noland as he adjusts to his new life of solitude, where time doesn't matter, where there is no communication, and where his only friend is imaginary -- a rotting volleyball, which he names "Mr. Wilson" (after the sporting good company).

This second act is actually split into two halves, shot nearly a year apart; Hanks underwent a rigorous physical routine to gain and then lose the necessary pounds to make Noland's transformation believable, earning his Oscar nomination by matching Zemeckis's passion for exploring not just the physical but the emotional, intellectual and spiritual consequences of alienation. It is hard to recall a performance as transformative.

Much was made at the time of 'Cast Away's theatrical release about the pioneering use of CGI effects to convince us that Hanks really is stranded on an island thousands of miles from civilization with nothing visible on the horizon. Yet the film moves us not because of its cold proficiency but because Zemeckis is so meticulous in melding the visual trickery with his story that the effects are quickly forgotten.

Although the much-derided trailer for 'Cast Away' revealed as much, those not familiar with the film's ending may want to skip to the next paragraph. After such a challenging middle section, it is perhaps unavoidable that Noland's eventual return home to reconcile with Kelly would deflate the film's tension. To be fair, had the film simply ended with Hanks finding rescue from the island, it would have almost certainly felt unfulfilling. Yet, at the same time, there is nothing Zemeckis can possibly do to create a final resolution between Chuck and his great love that would stir our emotions the way it should, or rise to level of the great operatic love stories (this is no 'Dr. Zhivago'). At least the climactic shift does not violate any of the themes Zemeckis set up in the first act, and with careful consideration, it actually deepens the film's ultimate impact and meaning. But it's more cerebral than emotional, and as such, curiously unmoving.

Still, with 'Cast Away,' as in 'Forrest Gump,' Zemeckis continues to prove himself as one of Hollywood's most decent of filmmakers, and Hanks the most decent of actors. Together, they have made 'Cast Away' a rarity in Hollywood -- a drama about adult concerns and experiences. It's certainly a flawed film -- the third act just doesn't fully coalesce -- but at least 'Cast Away' has something to say, and upon repeated viewings, I'd even argue that the film's message actually grows more resonant. 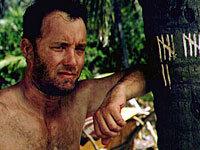 'Cast Away' first hit standard DVD back in 2001, and at the time was widely considered to be one of the best transfers around. I gave that disc a quick spin before watching this new Blu-ray, and was surprised by how well it has held up. That gave this new 1080p/AVC MPEG-4 encode a great deal to live up to, but I'm happy to report that it's more than up to the challenge. (Note that the back of the Blu-ray box incorrectly lists the film's aspect ratio as 2.35:1; it is in fact 1.85:1.)

Robert Zemeckis brings all of his considerable visual talents to 'Cast Away,' as well as the latest in CGI technology (at least circa 2000). As such, the film is visually sumptuous all the way through -- particularly the second act on the island. The level of depth and detail reaches fantastic, and the color saturation is exquisite. The shimmering waters are a gorgeous, crystal clear blue, and the expansive vistas are flush with deep jungle greens. Just as impressive are darker scenes, with shadow delineation holding up wonderfully even in scenes with minimal light sources (such as moonlight or a bonfire). Yes, there is grain in the picture, but all of the positive elements can elevate 'Cast Away' to the level of demo material.

It's not really a complaint, but the opening and closing acts of "Cast Away' a bit more plain, at least in terms of bright colors and picturesque visuals. However, this is obviously intentional, and even here the transfer doesn't falter. The visual palette is muted but fleshtones hold firm, and there is still a great deal of depth and dimensionality throughout. The presentation is also nice and sharp, with no irritating edge enhancement or other compression issues. Now seven years old, 'Cast Away' fully qualifies as a Blu-ray catalog title, but it's one of the best I've seen yet from Fox.

As much as I loved the video, I may love the audio even more. 'Cast Away' boasts masterful sound design, delivering a palpable sense of atmosphere without resorting to over-the-top, sledgehammer sonic tactics. Even better, this Blu-ray edition sees the film receive its first-ever high-res audio track -- a truly superlative DTS-HD Lossless Master Audio 5.1 Surround mix (48kHz/24-bit).

The middle island section is where the film truly comes alive, with the constantly-sustained ambiance a remarkable accomplishment. Even the lapping of waves can send chills up the spine, so exquisite are the delicate aural qualities of the rear soundstage. It has real heft and presence, but also such fine attention to detail that's utterly realistic. It truly feels as if the island is a living creature.

Although 'Cast Away' is not a film of action, it does contain one scene that will now easily rank among my top bits of demo material: the plane crash. Zemeckis is a master manipulator as he lulls us into a false sense of security with the serenity of the final minutes before the astonishing sequence, which makes the crash even more overwhelming. The sheer force and impact of the sonics in the scene and the highly immersive 360-degree effect are true stunners. This sequence, combined with the island scenes that follow, are a master course in all the facets that make for a reference-quality soundtrack, and make 'Cast Away' a must-listen. 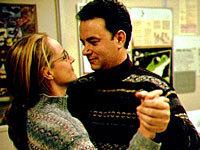 Although Fox has been better with its more recent Blu-ray titles in terms of retaining most if not all of the extras from the standard-def versions, unfortunately that's not the case with 'Cast Away.' All of the documentary materials from the two-disc DVD edition are absent, making this one skinny Blu-ray release (not unlike Tom Hanks in the movie itself).

'Cast Away' is not a perfect movie, primarily due to a vaguely unsettling third act that promises more uplift than it can deliver. Still, it's a film that's actually more impactful upon repeated viewings, which is an astonishing rarity among modern mainstream films. Fittingly, this Blu-ray also excels in only two of its three acts. The video and audio can be truly spectacular, but it's a real shame that Fox has abandoned so many of the materials found on the standard-def DVD two-disc set. Still, with such great fundamentals, overall this one remains an easy recommend.

Sale Price 9.88
List Price 11.49
Buy Now
3rd Party 14.99
In Stock.
See what people are saying about this story or others
See Comments in Forum
Previous Next
Pre-Orders
Tomorrow's latest releases