Ti West returns to rural Texas with his gorgeously horrific Technicolor X prequel - Pearl. As another terrifying journey into patriarchal horror, West uses the bright and bold colors of the Greatest Generation and their disheartened dreams of a better life to give his now iconic character a fitting and terrifying backstory with an incredible performance from Mia Goth. Lionsgate delivers a fitting Blu-ray release with an excellent A/V presentation and some slim but interesting bonus features, but like X it cries out for a proper and deserving 4K Ultra HD Blu-ray release. Hopefully, someday soon that comes about, but until then this disc will do just fine. Highly Recommended

Pearl (Mia Goth) lives out her days on the family farm with her strict and controlling mother Ruth (Tandi Wright) and her infirm father (Matthew Sunderland). The daughter of German immigrants, she’s stuck under the heel of her mother’s nature as the Great War rages amidst the influenza pandemic. As Pearl waits for news of her husband on the front lines in France, she braves her plague-riddled hometown to pass the time at the pictures steadily feeding her growing delusional fantasy of getting out and making it big in the flicks. And she’ll do anything to make sure her dream comes true. 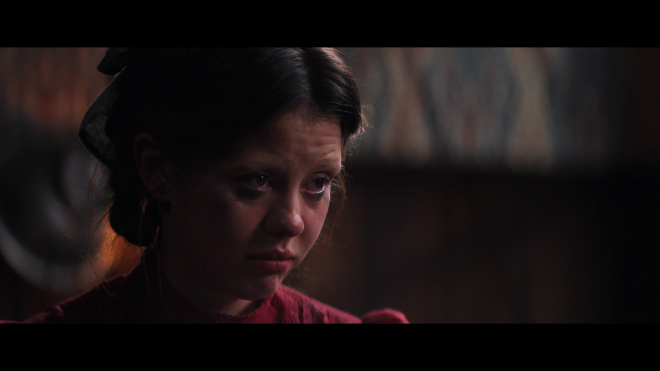 They say boredom begets inspiration, and if that’s the case, it worked out brilliantly with Pearl. Due to New Zealand’s two-week quarantine restrictions for incoming travelers, Ti West had a lot of time to kill ahead of filming his surprise horror smash X. Collaborating with star Mia Goth, the pair concocted a distressing and solemn worthwhile prequel story for Pearl. Filmed practically concurrently with X, Pearl proves to not only be a great film, but it’s also a haunting and horrifying experience without replaying any of the same cards found in X.

Pulling the story back to 1918, the film makes smart use of mask mandates as the influenza pandemic raged on against a beautiful Technicolored backdrop of American youth. Peal parades around much like Dorothy in The Wizard of Oz deep in the dreams of a better life elsewhere. Her lone outlet is the pictures where her fantasies grow and inner darkness takes root. West and Goth smartly use the lack of genuine human connection to fuel her growing issues. People are always at an arm's length or further and the few times she actually has any human-to-human contact is cold and inhuman or even tragic.

Visually, this film is absolutely stunning. Where X enjoyed the gritty neo-realism of the 1970s, Pearl bathes in classic Hollywood artifice. While the story may take place in 1918 pre-dating Hollywood’s golden decade of the 1930s, it pulls from that era’s view of simple Americana living. The themes and motifs are splashed on the screen with brilliant reds, blues, and yellows. This color scheme may be distractingly beautiful, but it also deftly ties back into key moments within X completing Pearl’s journey from a horrible start to a shocking finish. And Mia Goth is phenomenal. 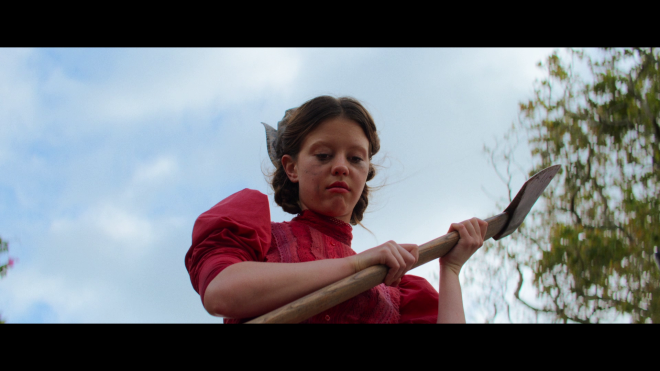 As much credit is given to Ti West for pulling together this soon-to-be-trilogy, actress and co-writer Mia Goth deserves ample credit. As she’s in virtually every frame of the film, she delivers an incredible performance delving into moments of pure joy coupled with tragic darkness. Much like the first film, Pearl tackles issues of patriarchal sexism. Like any naturally healthy human, Pearl has urges and needs but is deprived of them by the overpowering force of her upbringing and unfortunate geography. Goth brings incredible humanity to this terrifying but tragic character complete with a truly Oscar-worthy near-eight-minute monologue.

As to where this film falls in scale to X, well, I have a tough time ranking the two. They’re distinct cinematic experiences to be sure. Where X has far more humor and shock value, Pearl is more tragic and horrifying. But watching them nearly back to back now as I have, they’re amazingly cohesive. The damnable misery of fortifying my feelings about these movies is the story isn’t done yet. We’ve still got one more to go. My hope now is Ti West and Mia Goth can close this little loop nice and tight with their unexpected trilogy capper MaXXXine reportedly due out sometime in 2023.

Vital Disc Stats: The Blu-ray
Pearl makes her debut on Blu-ray thanks to Lionsgate in a two-disc Blu-ray + DVD + Digital set. The discs are housed in an eco-friendly case with slipcover artwork. We were sent the rather nice-looking Walmart Exclusive cover but there’s no difference in content. The disc loads to an animated main menu with traditional navigation options along the bottom of the screen. 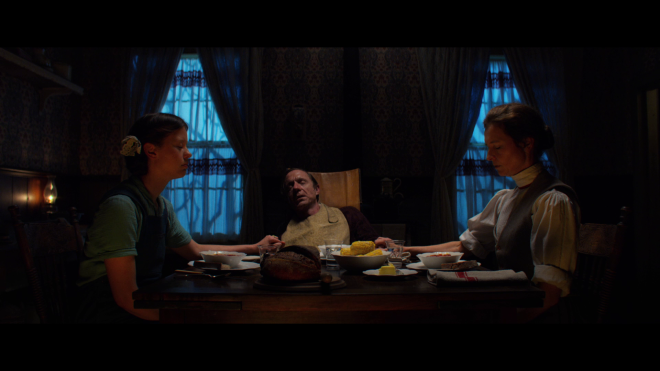 Pearl dances her way onto Blu-ray with a splendid 1080p 2.39:1 transfer… and I can’t understand why it’s not out on 4K. Like X, I haven’t been able to find any info if the film was finished in 4K, but with the image details present in this disc and the film’s gorgeous color scheme, it cries out for a 4K disc release. It’s available on digital retailers VUDU and iTunes with Dolby Vision and Atmos adding to that frustration. 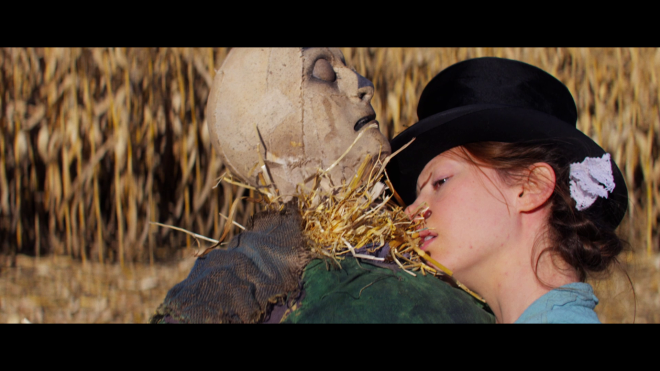 But, as a Blu-ray-only release, I will say this is a dynamite disc. Again details are sharp and clear allowing you full appreciation of Pearl’s little world. From facial feature details to the immaculate production design work to Pearl’s red dress, it’s quite stunning to look at. Then you have the colors which offer peak primary saturation with lovely bright blues, golden yellows, and crisp crimson reds. Black levels are also impressive offering deep inky blacks with excellent shadow definition. All around this is a practically flawless disc… but I’m quite certain an even better visual experience lurks around the corner for a future release. 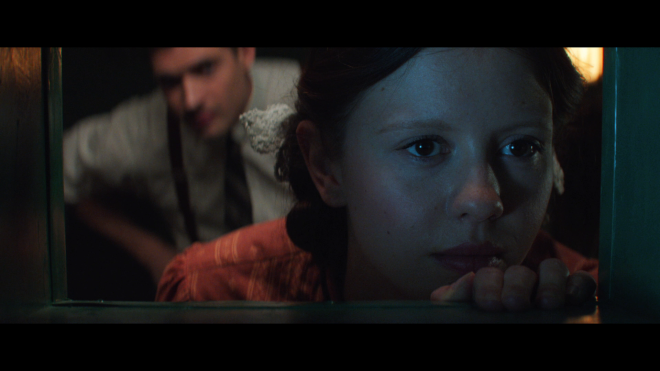 Much like the video, Pearl enjoys a pretty terrific DTS-HD MA 5.1 audio mix… but there’s an Atmos track out there for digital 4K releases so again, this disc feels more like a stopgap release ahead of something bigger and better. On its own merits, this track certainly delivers an excellent and immersive auditory experience. From Pearl’s fantasies at the theater to a dance in a cornfield to a calamitous thunderstorm, there are many highlight moments throughout this track that makes terrific use of the available channels. Dialog is clean and clear without issue and scoring by Tyler Bates and Tim Williams is a fantastic blend of horror and olde-tyme classic musicals. 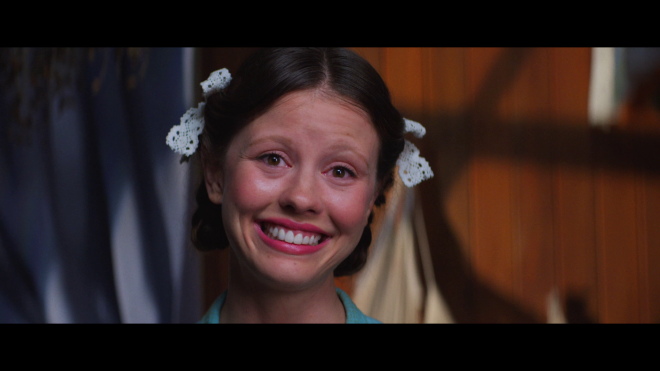 This certainly isn’t the biggest most robust assortment of bonus features ever but what we’re getting are some nice juicy little bits to gnaw on… again, hopefully, we’re getting something bigger and better down the line. 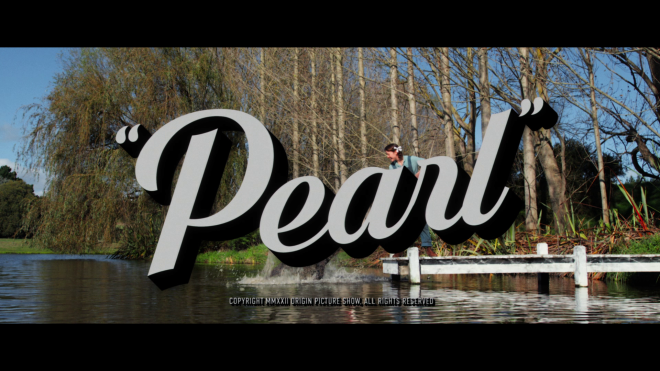 Tie West and Mia Goth have had a bumper year with a crop of excellent horror films. X was a shocking hilarious turn and now with Pearl, we have a hauntingly beautiful and disturbing prequel. While this film certainly seeds scenarios and events seen in X, it stands tall on its own thanks to a sharp script and direction from West with co-writer Mia Goth delivering an incredible performance. But the story isn’t complete until we get a look at MaXXXine! To hold us over Lionsgate is issuing a two-disc Blu-ray + DVD release of Pearl - a movie that by all means demands to be seen in 4K. This disc certainly doesn’t skimp in the A/V department with an excellent transfer and audio mix, but digital retailers have Dolby Vision 4K with Atmos available, so it makes giving a final recommendation difficult because I’m confident we’ll soon see 4K discs popping up like little Technicolor roses. Whether or not they bloom here in the states or if Capelight is working on a new Mediabook set to complement X, I don’t know. But when they show I’ll grab them up. Until then this film was phenomenal and needs to be seen Highly Recommended.