Salvator Cangemi is a produce purveyor in Milan, Italy whom moonlights as a pimp and runs a profitable twin businesses. But the appearance of a ruthless and greedy French gangster called Le Capitaine threatens Toto s livelihood when Le Capitaine wants to unite the organized crime in Milian for him getting a large share of the profits. But Toto wants no part of Le Capitaine s organization and wants to continue running his own ring in a low-key quiet way. But no one says no to Le Capitaine and he threatens an all-out war to keep his organized crime ring, and reputation, intact.

Before attaining horror notoriety with the cannibal exploitation features, 'Eaten Alive!' and 'Cannibal Ferox,' Umberto Lenzi was making a name for himself with a variety of genre flicks: the Eurospy knockoffs, giallo murder mysteries, and Macaroni combat pictures. He also directed a very small number of westerns, and arguably his most interesting movie in this category is 'Pistol for a Hundred Coffins,' which mixes horror elements within the stylized Italian-western framework. The point being that the director had quite the talent for making easily-digestible and entertaining movies from familiar genre conventions and worn-out tropes. For those wanting to learn more of Italian cinema, Lenzi is a good place to start.

'Gang War in Milan' is the director's debut in the Italian crime thriller genre called Poliziotteschi films, which was already a widely popular subgenre by the early 1970s. Working from a screenplay Lenzi co-wrote with Franco Enna, the movie adheres to the basic formula with gang leaders and "Mafioso" types as the protagonists. His skill behind the camera is evident when he manages to turn the blueprint into something refreshing and exciting, a crazy spectacle of the dealings of underground crime lords, double-crosses, corporate espionage, gunfights in the streets, murder, and a few scenes of torture. As an audience, we are so caught up in the back and forth of these men's business and their attempts to moralize their actions that we don't see the betrayal of those closest coming from a mile away.

Antonio Sabàto, a familiar face to Italian moviegoers and growing into a veteran of the genre by the time he landed this role, stars as crime boss Salvatore "Toto" Cangemi, a likeable personality who worked his way from the streets of Milan to become the leader of a powerful organization. Despite being the typical morally-ambiguous archetype, in Sabàto's capable hands, the dangerous Toto is a complicated individual with aspirations of being a legitimate business man and having a family, a seemingly tough-guy loner who in reality wants it all to mean something. Ignoring this illegal activities, which is mostly in the prostitution racket with political connections, he's an otherwise honorable man who visits his mother at a rest home and surrounds himself with a close-knit group of friends. 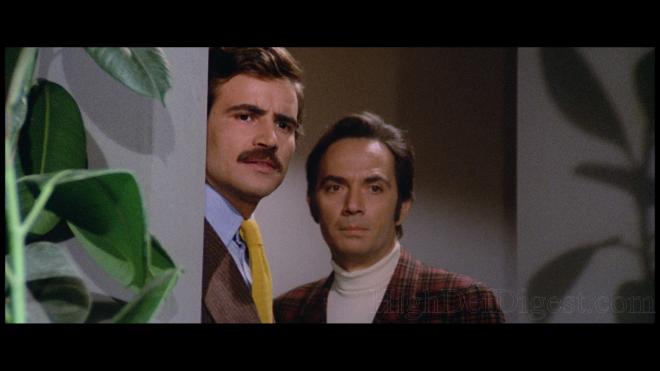 As such, he's basically the film's antihero because his fight against the French crime boss known as "The Captain" (Philippe Leroy), who's forcing his way into the business peddling drugs to the customers of Toto's working girls, is a futile battle against the direction the world is naturally progressing. And rather than simply having the plot be a straightforward crime actioner, Lenzi has Toto slowly lapse in his morals and succumb to a dark downward spiral of murder, deception and pride, the sudden ballooning of his ego as he convinces himself of having won the war. Sadly, there's a bigger game growing in the background while the streets run rampant violence and women are treated as little more than pawns to men's struggle to obtain and maintain power.

With cinematography by Lamberto Caimi ('Il Posto,' 'Death Occurred Last Night'), Lenzi does marvelously in staging and arranging every scene so that the frame is constantly occupied with some sort of action. When Toto and the Captain meet for the first time, the image is filled with loud, vibrant blues as the Frenchman's two goons stand in the distance with guns, creating a tense conversation which makes Toto's power questionable. On the flipside, when Toto visits the Captain's dimly-lit, amber red nightclub, our hero is reigns supreme and in control. By film's end, the ornately baroque casino scene is the filmmakers' final lasting visual commentary on the two men's power struggle, making 'Gang War in Milan' a wonderful, stylishly-rich genre flick that entertains with engaging story.

Raro Video brings 'Gang War in Milan' to Blu-ray on a Region Free, BD25 disc inside a blue, eco-lite keepcase. Along with a cardboard slipcover, the package includes an 12-page booklet with a biography on Umberto Lenzi and an insightful essay by filmmaker Mike Malloy. At startup, the disc goes straight to a main menu with full-motion clips and music.

War breaks out on Blu-ray with a good and likeable 1080p/VC-1 encode, showing a mostly well-balanced contrast and crisp whites. However, there are a few sequences which run a tad hot with slightly blown highlights, softening the overall quality and making the darker portions of the 2.35:1 frame noticeably murky. However, black levels in general are accurate and deep. Colors, especially reds and blues, are bold and cleanly rendered with full-bodied secondary hues, making the whole movie look rejuvenated. Definition and clarity are excellent for the most part, particularly for the film's age, with distinct, fine details in facial complexions, but several instances appear as if the result of some mild noise reduction. Nonetheless, the high-def transfer is agreeable.

Arriving with two listening options, the Euro-crime classic comes with a pair of equally strong uncompressed PCM stereo soundtracks. However, given the choice between the two, the original Italian is superior to the English dub, mainly because the former displays a better, more natural soundstage. Dialogue is well-prioritized in the center while music subtly spreads into the other channels, creating a pleasing and engaging soundfield. The mid-range is clean and detailed with appropriate bass. On the other hand, the English version is pretty listless with everything coming in at the same volume and not much distinction in the orchestration. Besides, the latter track also has various instances of popping and hissing in the background, but with the former sounding so good, the lossless mix overall is quite enjoyable and definitely the way to go with this movie.

From Umberto Lenzi, 'Gang War in Milan' is a stylized and engaging genre crime thriller that entertains with its visual design as well as with its story about one gang leader's struggle to maintain his power. The Blu-ray from Raro Video arrives with a strong audio and video presentation that will please fans, but the lack of supplements, save for one, is a bit of a downer. Nonetheless, enthusiasts of cult Italian cinema will be more than happy to have this in their collections.

Sale Price 22.99
List Price 29.95
Buy Now
3rd Party 16.93
In Stock.
See what people are saying about this story or others
See Comments in Forum
Previous Next
Pre-Orders
Tomorrow's latest releases