Let me get this out of the way right up front -- zombies shouldn't run. The undead should be lumbering creatures of instinct that overwhelm their victims, instead of running them down. Slow zombies not only ratchet up the tension, but they allow for more carefully plotted character development.

Luckily for me, '28 Days Later' doesn't feature fast zombies. In fact, the speedy ghouls in the film aren't zombies at all. Instead, according to the mythology of the film, the creatures are humans, infected with a "rage virus" that has swept across London in record time. The pseudo-zombies are violent and cannibalistic, but they're not undead, and they don't even require a bullet to the brain to put them down.

28 days after the initial outbreak, a man named Jim (Cillian Murphy) awakens from a coma in an empty hospital, oblivious to the outbreak that has consumed his homeland. As he wanders through the abandoned streets of London, he's attacked by a group of infected locals and nearly killed. Eventually joining forces with a chemist named Selena (Naomie Harris), a cabbie named Frank (Brendan Gleeson), and the driver's teenage daughter (Megan Burns), Jim and his newfound friends will attempt to reach a military outpost that's their only hope of survival.

As a long-time zombie flick aficionado, I really enjoy '28 Days Later.' Even though it breaks every rule in the undead handbook, it manages to mix up the conventional formula and establish a new code of tension and terror. In fact, the action beats are so explosive and surprising that I find myself gripping my seat each time I watch the film.

Director Danny Boyle ('Trainspotting,' 'Sunshine') doesn't coat the streets in blood or awaken our hero in the midst of anarchy. Instead, he sets a morbid tone of loneliness and abandonment that makes it feel as if the movie truly resides in the real world rather than a fantasy-horror realm. As Murphy's character strolls around the eerily empty London streets, there's a palpable sense of dread that easily matches the overt intensity of the film’s higher-adrenaline attack scenes.

The performances are grounded in reality as well. In the capable hands of Cillian Murphy, Jim doesn't miraculously transform into Joe Hero. His character is quiet and confused, resorting to violence as a means of survival rather than for our entertainment. The supporting actors are excellent, as well (particularly Brendan Gleeson, who many will recognize as Hamish from 'Braveheart'). Each member of the cast seems to understand their role in Jim's tale, while still infusing a level of complexity into their own character. I challenge anyone to find a single actor in this film who doesn't bring their A-Game.

The one thing that does come close to deflating the experience for me is the relatively conventional third act. While the military subplot is well crafted, it feels as if it exists in an entirely different film (one more akin to 'Dog Soldiers'). I can see the parallels Boyle is establishing between isolation and insanity, but I think the last act could've been more focused and unique. Finally, the film’s ultimate resolution in the last five minutes feels tacked on and neutered.

Overall, '28 Days Later' is an exceptional film that takes only a few missteps during its last breaths. The performances are strong, the tone is refreshingly realistic, and the director brings a unique touch to the horror genre that sets the film apart from the crowd. Some zombie fans may take issue with the film’s sharp division from genre conventions, but '28 Days Later' is a smart film with a great script, and it deserves all of the kudos that it has received. 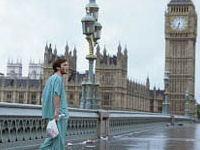 "Utterly disappointing" is the only phrase that comes to mind at the moment. This Blu-ray edition of '28 Days Later' arrives with a hazy 1080p/AVC MPEG-4 transfer that's only a meager step up from the already-problematic DVD. In fact, I found the finalized image incredibly similar to the upscaled DVD presentation.

Where to start? The entire transfer is soft and host to the murkiest backgrounds I've yet to experience on either high-definition format. Actors are blurry, textures are indistinct, and fine details are frequently obscured by video noise. Shaky colors and wavering contrast combine to create a painful, two-dimensional picture -- one that is further flattened by the consistent presence of intrusive artifacts. Even worse, most shots suffer from edge halos, quick pans tend to pixelate the image, and cityscapes are smeared and shifty. Detail is the tiniest bit sharper than the DVD, but it's a minor improvement that's an inherent product of the increased resolution.

To be fair, I wasn't expecting to be blown away by the video on this release. The majority of the film was shot using a European model Canon XL-1s standard-definition camcorder at 720x576 resolution (thanks to Grubert for the info), a decision on the part of the filmmakers to give the film a rough-around-the-edges visual style. As such, it’s unrealistic to expect that '28 Days Later' would look as sharp as other high-def releases. I did, however, hope to see at least some benefit from this Blu-ray transfer.

While an argument can (and I’m sure, will) be made for Boyle's directorial intentions, in my book it can't justify a higher video score for this one. It would simply be irresponsible to rate this transfer at the same level as other, better looking, high-def releases. 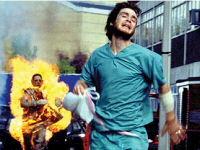 Although I found the video transfer problematic, to my delight, the audio package steps up its game considerably, especially given the underwhelming mix that accompanied the standard-def DVD. This Blu-ray edition of '28 Days Later' features a commanding DTS-HD 5.1 Master Audio mix (downgraded to a 1.5 Mbps core on most BD players) that, while still not perfect, will turn heads and impress your friends.

The track's dynamics are pushed to extremes, and bass tones are particularly memorable. The LFE channel is powerful to say the least and makes every gunshot deafening. There's also a refined level of ambient atmosphere in the surround channels that adds depth to the soundscape. Best of all, dialogue remains crisp and well-prioritized, even when the third act ratchets up the chaos.

Having said all that, there are still some fundamental technical issues with the mix. First off, directionality is slightly off in several scenes, and the design occasionally places rear sounds into all the channels for an artificially increased effect. There are also some treble issues that lead to random frequency whistles beneath the audible components of the soundfield. To top it off, the soundscape generally doesn't feel very organic, with key elements (including voices) often sounding disjointed from other sound effects.

Still, the audio offers a pleasing upgrade from the muddy sound package on the DVD, and fans will be happy to hear the improvements. 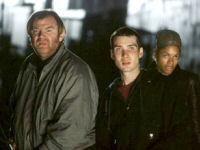 Seeing as '28 Days Later' was a surprise hit when it arrived in theaters stateside (earning over $45 million in relatively limited release), I suppose it shouldn’t surprise that Fox produced a fairly lavish set of extras for the 2003 DVD debut of this low budget feature. Happily, the studio has ported over that entire supplements package for this new Blu-ray edition.

First up is a fairly standard feature commentary with director Danny Boyle and writer Alex Garland. The two have a causal banter that rarely devolves into drawn out technical chit-chat. They discuss the film's tone, locations, special effects, story, characters, and its original inception. Most interestingly (to me, anyway), they discuss their decision to use silent, deserted streets to invoke terror rather than blood-stained locales.

Next comes a generous collection of "Deleted Scenes and Alternate Endings" that also include optional director commentary. Although the six deleted scenes (9 minutes) don't add much to the proceedings, the real value here lies in the bleak alternate endings (13 minutes). The three endings that were available on the standard DVD (the fourth is exclusive to this Blu-ray edition -- see below) provide an interesting glimpse into the minds of the filmmakers but don't have an affect on my opinion of the overall film. The only slight disappointment in the bunch is "Unfilmed." The concept for this logical ending is fascinating, but you’ll need to bring your imagination, as it’s presented here using storyboards and voiceovers only.

"Pure Rage" (24 minutes) is a unique behind-the-scenes featurette that begins with an investigation into viral epidemics and outbreaks. As scientists and theorists line up in front of the camera, I eventually found myself wondering if the featurette was ever going to explore the filming of '28 Days Later' at all. After a long ten minutes, the cast and crew finally show up to discuss the flick itself.

There are also two great collections of photos delivered via animated slideshows -- a traditional "Production Gallery" (18 minutes) and a casual "Polaroid Gallery" (4 minutes). What elevates this feature beyond the norm is that both galleries include commentary from director Danny Boyle. It really adds a personal touch to the photos, and I had a good time listening.

Rounding things out is a montage of "Animated Storyboards" (2 minutes), a Jacknife Lee music video (6 minutes), a teaser trailer, and a theatrical trailer presented in high definition. Also included are high-def trailers for several other Blu-ray releases, including '28 Weeks Later,' 'From Hell,' 'Aliens vs. Predator and another Danny Boyle flick, ‘Sunshine,’ which (as of this writing) has yet to be announced for Blu-ray.

(Note that all of the video-based supplements, aside from the specified trailers, are presented in 480i/p video only.) 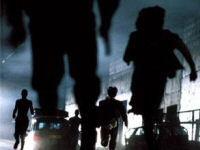 A breath of fresh air in a stagnant room of zombie flicks, '28 Days Later' transcends the genre and is likely to be enjoyed by all audiences. As a Blu-ray release, I had mixed feelings. Although this disc boasts a nice set of supplements and an impressive DTS-HD MA audio mix, I had a really tough time with the video transfer, which (to my eyes) is only a marginal improvement over the standard-def DVD. All things considered, if you already own this one on DVD, you might want to rent this Blu-ray before making a purchase decision. Otherwise, this one’s definitely worth a look.

Sale Price 10.99
List Price 16.99
Buy Now
3rd Party 8.25
In Stock.
See what people are saying about this story or others
See Comments in Forum
Previous Next
Pre-Orders
Tomorrow's latest releases