The Films of Doris Wishman: The Moonlight Years

Before maverick cult filmmaker Doris Wishman started making color sexploitation films in the 1970s, she made a series of hard-nosed, sex-focused noirs that stand tall as some of her greatest, most perverted work. In The Films of Doris Wishman: The Moonlight Years, a new nine-film, three-disc Blu-ray set from AGFA, Something Weird, and OCN Distribution, this era is assessed both on the screen and in the great collection of supplements attached. Six of the films have been restored in 2K from their original negatives and look sterling, especially given the low budgets of Wishman’s films. The other three have been sourced from S-VHS masters, and those also look great given the sources. This second volume in AGFA’s continuing retrospective of Wishman’s career comes Recommended!

What is there to say about filmmaker Doris Wishman other than the fact that she’s among one of our foremost American cult film figureheads? Oh, well, since she frequently detested labels, maybe she wouldn’t like anyone saying that. Either way, when you’re watching a Wishman film, you’re enveloped in her universe, which is usually in drab apartments or local NYC parks. Locations are reused all the time, live sound is rarely recorded, and the cutaway is a storytelling tool as strong as the montage. And yes, of course, there’s the trademark nudity that occupies so much of her work, although that titillation is textual to her dire, sultry tales of sex and greed. 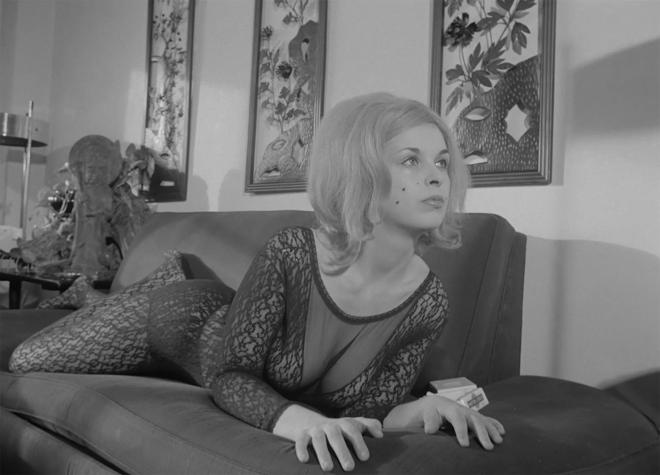 Up first in the set is Wishman’s Bad Girls Go to Hell, which is not only the best and most well-known film and the set, but it’s also the one that sets the tone for the rest of the set. As mentioned previously, you’ll frequently see Wishman revisit locations, actions, plot twists, etc. in a journey to perfect her own whacked-out formula. That’s not to say that the included films are just slight variations of one another, but rather that you’ll find yourself dissecting just how well these common notes work in each story. Plus, Wishman’s assaultive style goads the viewer into giving into its depiction of grime, one that weirdly bears repeating in these slimmed-down roughies.

Anyway, back to Bad Girls Go to Hell. Lonely housewife Meg (Gigi Darlene) is left to her own devices after her husband Ted (Alan Feinstein) leaves her to go work from their Boston-area apartment. You see, Meg likes wearing a negligee around the house and even when taking out the trash, much to the dismay of her skeevy building superintendent (George La Rocque), who repeatedly badgers and then rapes Meg, who kills the man in self-defense and flees to New York City. But when she arrives in the big apple, she’s immediately enveloped by a seedy world of sex and crime, a world that’s ready to take advantage of an innocent housewife such as her. This is really Wishman’s formula perfected, as in her universe of battered beauty in drab apartments, is given the best narrative through-line to shine through here.

Next up is Indecent Desires, which weirdly feels like part reaction to Bad Girls Go to Hell, although it was released three years following in 1968. The zaniness of Wishman’s plots is really pushed to the extreme here, with a story about a sinewy Manhattanite named Zeb (Michael Alaimo) who finds a doll and a ring that gives him power to control the sensations experienced by Ann (Sharon Kent), a beautiful ingenue that Zeb is obsessed with. Ann thinks she’s slowly losing her mind with her constantly vacillating emotional state, a trope that Wishman would commonly turn to, but the director’s version of voyeurism is batty, jagged, unique and beautiful.

Watching this era of Wishman’s career through this set will have you succumbing to the casual yet unpredictable nature of her filmmaking, with that trademark jazz soundtrack being frequently punctuated by jagged editing, camera movements and foley work. There’s a lot of uneasiness in these films, with awful things happening to people with little notice, but that’s also Wishman working through something deeply personal here. 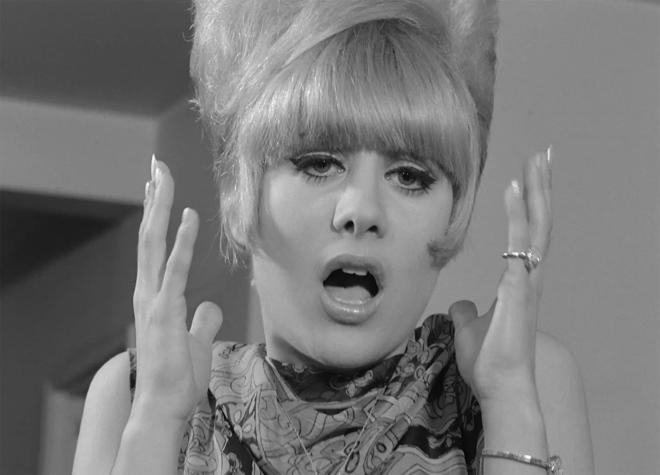 Other highlights of the set include Another Day, Another Man (1966) and My Brother’s Wife (1966), a duo of sexploitation flicks that are actually a lot funnier than what you’d expect given the action and tone of these films. In Another Day, Another Man, a prude is quickly sullied by a world of sex and danger when she decides to become a hooker. The downward journey this woman takes feels both fatalistic and hilarious, with a very clear tongue-in-cheek humor to the degeneracy on the screen.

The oddest film in the set is on disc three, with Wishman’s clear gun-for-hire jobs in The Hot Month of August. It’s a Greek-imported film that Wishman uses material from, spices it up with even more titillation and perversion, and somehow adds a murder plot on top of it all. The story is relatively simple, telling the tale of a man on a downward sexual spiral, standing in contrast to Wishman’s usual ingenues. The grafting of the cult filmmaker’s craft onto previously filmed sequences by Sokrates Kapsaskis provides a ton of fun and a dissonance sleaze fans will enjoy.

In summation, there’s an entire world of cult filmmaking to explore in this set, pulling from both the hits and the rarities in Wishman’s career. If you’re a fan of the punchy, moralistic style of Samuel Fuller’s noirs, just supplant it with a ton of nudity and a darkly humorous vibe to get Bad Girls Go to Hell and so many of the other films in this set. What a gift!

Vital Disc Stats: The Blu-ray
Wishman’s unique world of grit, grime, and sex gets the boutique treatment with AGFA and Something Weird’s three-disc (BD-50 for each) Blu-ray release that comes in a clear amaray case with a booklet including an essay by Lisa Petrucci and an old interview with Wishman by Mike Watt. The case is housed in a limited-edition slipcover, which is then housed in a limited-edition slipcase, exactly like AGFA’s first volume of their Wishman retrospective series. Each disc boots up to a standard menu screen with options to watch each film with or without the accompanying commentary.

Although most of the films included here were shot on shoestring budgets and not always with the best equipment given that previous statement, AGFA and Something Weird have delivered some frequently breathtaking restoration work here. As mentioned earlier, six of the films in the set are sourced from their original 35mm camera negatives, and I can firmly state that they all exhibit sturdy contrast and a great depth of detail. Going back to the Fuller comparison, I found the definition around objects, bodies and faces in Wishman’s films similar to how Fuller composes. It was really nice to see that estimation reflected resoundingly through sterling transfers all overlaid with natural, but never intrusive, film grain.

A Taste of Flesh, Passion Fever and Too Much Too Often! are all sourced from Something Weird S-VHS masters. Even given the source, these presentations look decent, although a bit flat given how tape presents information. Not much cross-weaving or damage to be noted in these transfers either. In a bit of contrast to the first Wishman set from AGFA, this second entry compiles some much more rare films from Wishman's career. In particular, The Sex Perils of Paulette arrives at ten minutes longer than any previously released version on home video. The fact that we got a scan of that from the original negative is a triumph for cult film preservation.

Each film gets a DTS-HD MA 2.0 mono track and on the whole, the films sound terrific! As mentioned in one of the audio commentaries by queer film historian Elizabeth Purchell, Wishman used a professional sound studio for the dialogue and music in her films. That fact is backed by just how clean these tracks sound, carrying that signature texture of the stock jazz music without exhibiting tininess. Dialogue is also clear and resolved nicely, and make sure to focus on the vocal performances of the audio. Wishman put a lot of effort and time to orchestrating the sound in her films.

As for supplements, there’s a well-appointed booklet in the set with an essay by Something Weird’s Lisa Petrucci and a very catty, whimsical interview with Wishman by writer Mike Watt. You get a really good taste of who Wishman was through that interview, an irascible woman who hated being pigeonholed into a genre or given a label. Of all the commentaries in the set, I especially want to call out queer film historian Elizabeth Purchell’s commentary on Indecent Desires. It’s a track that’s not only filled with anecdotes about Wishman and sex films at large, but it’s carried by Purchell’s exuberance and passion for sex films. I highly recommend you give it a listen if and when you buy this set.

Watch women in despair! Gasp at the perversion! Stand aghast in the muck! Wishman’s gutter-noir era punches onto Blu-ray with a thorough three-disc Blu-ray set from OCN Distribution, Something Weird Video and American Genre Film Archive. Boasting beautiful transfers of these roughies and offering some great supplements, The Films of Doris Wishman: The Moonlight Years comes Recommended!