It’s a dodgy prospect to ever attempt a sequel or a remake of an Alfred Hitchcock classic, but that hasn’t stopped Hollywood from trying! In the 90s there was a spat of needless direct-to-cable sequels and remakes of horror favorites and The Birds II: Lands End is among the worst (albeit incredibly entertaining) offenders. Long lost to the winds of home video, Vinegar Syndrome hatches the first Blu-ray release boasting an impressive A/V presentation along with a great bonus feature package to match. Fans of schlocky horror and late-night cable movie fodder will get a kick out of this show. Worth A Look

“You know, mother nature can take only so much before she hits back with all she’s got.”

After the tragic loss of their son in a car accident, Ted and Mary Hocken (Brad Johnson and Chelsea Field) and their two daughters move to the small secluded community of Gull Island for the summer hoping to heal and recuperate. As Ted and Mary try to go back to work and establish a new future for their family, a mass of birds descends upon the small island. At first, everything seems peaceful, but then the attacks come. As the body count rises, the Hocken family's peaceful idyllic summer turns into a nightmare for survival.

Woe and the Second Lord of Cinema Carl Lumiere appeared before Cecil B. DeMille...

“Thou shalt not requel upon a sequel…”

“Thou shalt not make a remake upon a remake…”

“Thou shalt not make less than thirteen Friday the 13th Films…”

“Unless thy name be “Perkins,” thou shalt not make a sequel or remake a film by Alfred Hitchcock.”

If there was one thing cable movie channels used to be good for were some genuinely terrible, but highly entertaining movies! Whether it was late-night Cinemax skinflix or HBO plumbing the depths of their archive, there was always something on. Whether or not it was any good is a different question to answer. Thus it came to be that The Birds II: Land’s End was born. And much like the clothing line featured in the subtitle, this in-name-only sequel is a comfortable and relatively innocuous film. While this movie does feature an appearance by Tippi Hedren, she does not play the same character and is reduced to a mere cameo. 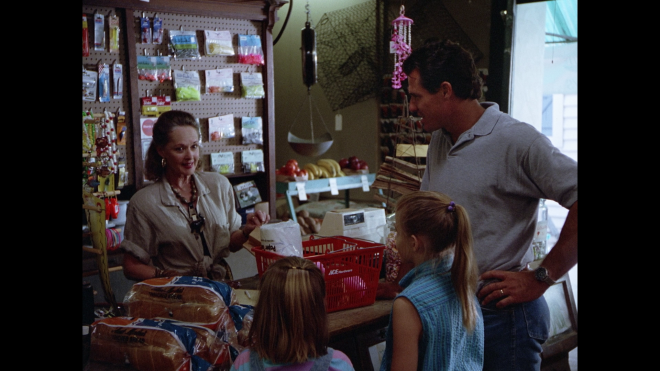 Directed by Rick Rosenthal Alan Smithee, the film is competently made with fine performances from the main cast, and a decent setup for some bird-on-human mayhem. Jan Rubes from Witness comes in as our sage elder lighthouse keeper to help our family in their hours of need and give a few seconds of exposition to frame that this film is in fact a sequel and not a remake. All credit to Rick Rosenthal Alan Smithee for actually trying to craft a sensible sequel that focused on characters and not just out-of-the-box horror. It was when the film was basically finished the producers stepped in and shot a new gory opening (that was basically a Jaws ripoff) with extra bloody bird attack footage for the climax that this movie just became a cheap-looking man-versus-nature movie-of-the-week monster flick. When those edits were made, Rick Rosenthal opted for Alan Smithee, but by that time all press and promotional materials featuring his name had already gone out so he couldn’t completely hide away from the film.

This isn’t to say that I think the film would have been much better without the extra gore and attack footage. Much like Rosenthal’s Halloween II, it’s rather bland without the carnage. And much like that sequel, The Birds II: Land’s End is in the impossible position of having to live up to expectations from an impeccable first film while justifying its reason for existing. Halloween II was a brilliant expansion on the first film by having the action pick up mere minutes after the chilling closing credits. The Birds II isn’t that lucky and it wastes one of its best assets – Tippi Hedren. She could have been a lynchpin character by returning as Melanie Daniels. She could have been the doomsayer, the person that knows what’s coming, or becomes a complete quack screaming at our new characters “You brought the birds!" Instead, she’s a completely different character who works in a convenience grocery. Without any actual ties to the first film beyond a throwaway line, The Birds II: Land’s End is the New Coke of sequels. 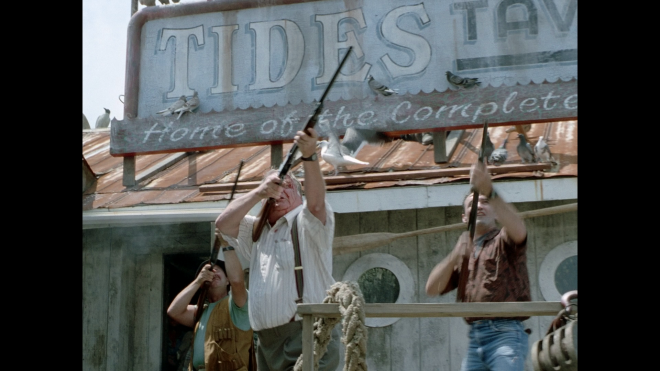 With that out of the way, I do have to say I’ve always been entertained by this movie. I caught this film as a kid when it was first shown on Showtime. My family was on a vacation in Florida for Spring Break and it rained almost the entire trip. When it wasn’t raining it was cloudy and humid. Struggling for entertainment, this was the best option and we had a blast. I hadn’t seen this movie in decades and it’s still an entertaining romp. Maybe not intentionally hilarious, but it’s difficult to deny the entertainment value, especially in the final act. For fans of schlocky nature mayhem movies, The Birds II: Land’s End proved to be a worthwhile endeavor. Hitchcock purists may well put this a rung up above the Psycho remake. For me, it’s about as strong as the Rear Window remake, but doesn’t have the draw of a paralyzed Christopher Reeve to hold it together. When the bird mayhem begins it's a blast!

Vital Disc Stats: The Blu-ray
The Birds II: Land’s End migrates to Blu-ray for the first time thanks to Vinegar Syndrome in a single-disc release. Pressed on a Region A BD-50 disc, the disc is housed in a clear case with reversible insert artwork depicting the original VHS box art. If you order from Vinegary Syndrome direct (while supplies last) you pick up a pretty classy slipcover with raised letters. The disc loads to an animated main menu with traditional navigation options. 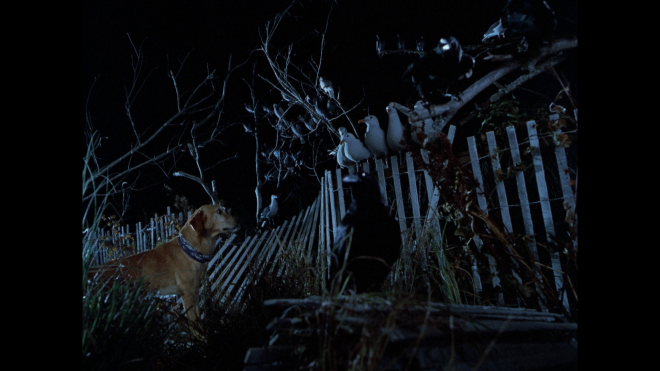 Presented in its original broadcast and home video 1.33:1 aspect ratio, this new 1080p presentation is actually pretty good. When this title was announced, I wasn’t expecting a whole hell of a lot; it’s not like its one on many people’s “must own” titles. To that end, this new transfer sourced from a 2K scan of the 35mm interpositive, is better than I could hope for. Details are strong giving you a full appreciation of the clothing textures, facial features, and of course the variety of real and fake birds. The production design for the house featured in the film is especially impressive. Colors are suitable giving a full range of primaries. Black levels are quite good, some issues pop up for night shots that feature optically-added birds flying around, but any apparent defects don’t really distract, just make the effect more obvious. Elements are in overall great shape with only slight occasional speckling. 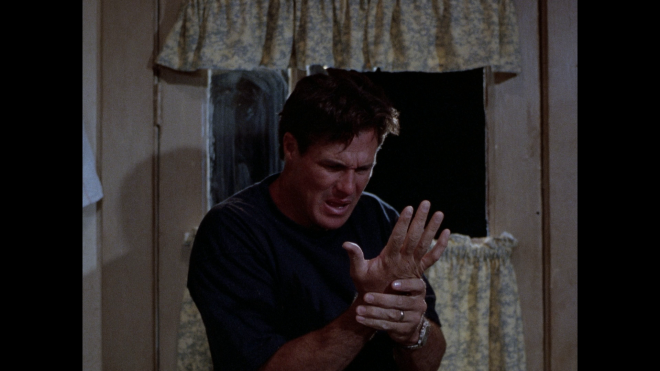 The Birds II: Land’s End makes landfall with an overall strong DTS-HD MA 2.0 track. There’s not a lot to this mix to call attention to itself but the sounds of birds fluttering, flying, or cawing about the screen create a nice soundscape. Dialog is clean and clear throughout without any issues for fidelity or any need for volume adjustments. Scoring helps add some mood and feel to the film without aping what Hitchcock did for the first film by only using bird sounds. When the big action kicks in for the final act the mix is appropriately active and chaotic for all of the explosions, gunshots, and screams of terror and death! 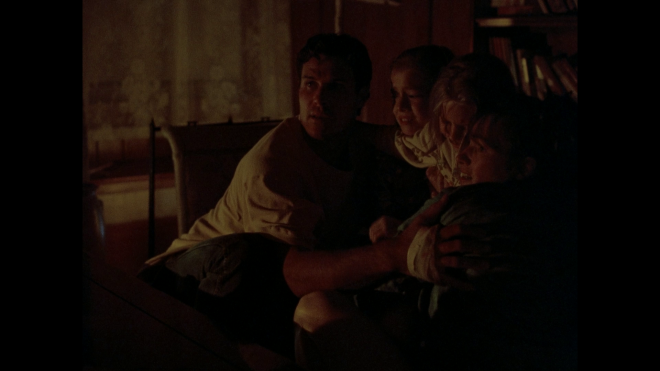 Thanks to Vinegar Syndrome’s excellent collection of bonus features, learning about how the movie was made and what the cast and crew went through to get it made may well prove to be more entertaining than the film itself! Heading the list off is a great audio commentary with Amanda Reyes and Sam Pancake that’s well worth the listen if you’re so inclined. Probably the best bonus on this disc is the near-hour-long making-of documentary with cast and crew as they discuss making the film, the eeriness of starting work right when The Crow was doing the final reshoots with Bruce Lee’s doubles on the same stages, shooting the film, creating the visual effects, and the fallout with the final cut. 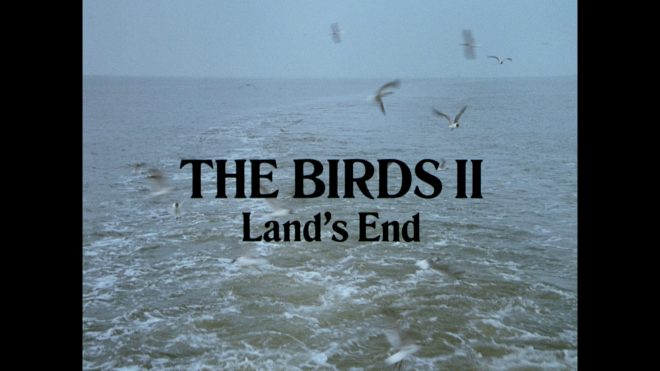 It’s pretty easy to argue that The Birds II: Land’s End probably shouldn’t have been made. In the 90s Universal was cranking out made-for-tv horror movies and needless sequels to fill up the premium cable schedules and video store shelves, and this was part of the fodder. While made with the best intentions, this film can’t hold a feather to the classic original. While not the version the director set out to make, this schlocky silly sequel maximizes its entertainment value with some wild bird-vs-human carnage and mayhem.

Thanks to Vinegar Syndrome The Birds II: Lands End lays a pretty impressive Blu-ray release. The A/V presentation is uniformly excellent while the bonus features are informative and very entertaining giving fans of silly needless sequels even more to caw about. Worth A Look if you love this sort of picture.