A young man acquires a mystical "monkey's paw" talisman that grants its possessor three wishes and finds his world turned upside down after his first two wishes result in a co-worker being resurrected from the dead who commits murder.

Lacking in tension, scares, and a story that engages viewers in the slightest, 'The Monkey's Paw' aims to be a cautionary tale about tempting fate and being careful about what you wish for. But not long after the first wish is made, the movie goes into snooze mode and sluggishly limps along, much like the reanimated corpse featured as the primary source of chills. Sadly, there's nothing frightening about a dead man come back to life who only desires to take his estranged son fishing. Quite literally, the entire premise of this Chiller Films production hangs by the thread of audiences believing the zombified father will do anything to force the owner of a mummified talisman to wish him reunited with his son.

Of course, screenwriter Macon Blair borrows the idea of a parent's love for a deceased child turning into an unhealthy obsession from the original source, W. W. Jacobs's 1902 horror short story. The major difference, however — aside from the fact that one is certainly nightmarishly creepier than the other — is that the son dies rather than the father, and Jacobs uses his death as the basis for some cynical cosmic irony. Their personal desires come at a painful cost. When realizing they are the cause for their son's gruesome accident, irrational emotions engender some dark wishes. The spine-chilling moment in the classic tale is the mysterious knocking at the front door, but Jacobs leaves his readers with one final, fearful twist.

For this latest adaptation of Jacobs's story, and there are numerous tellings of it in various media ("Last Respects" of 'Tales from the Crypt' series being a favorite), Blair and director Brett Simmons use portions of the original as backstory explaining how the shriveled monkey's paw came into the possession of the current owner. Except, there's no mention of how the supposed good-luck charm made its way from India to the bayous of Louisiana. No matter, the amulet and its supernatural powers to grant three wishes are handed over to blue-collar schmuck Jake (C. J. Thomason) by a recently unemployed and disgruntled coworker (Daniel Hugh Kelly), who does so for his own nefarious reasons. 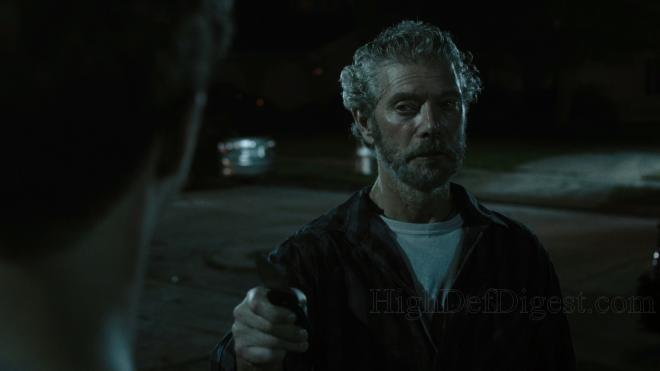 By this point, viewers will be quick to decide whether they like the movie or not because the characters are largely uninteresting and lifeless, despite each of them dealing with some sort of personal melodrama. The one potentially engaging aspect is the dad who wants to see and spend time with his son, played admirably and with a good deal of gravitas by Stephen Lang (Colonel Miles Quaritch of James Cameron's 'Avatar'). Unfortunately, it's all for naught after best pal Jake uses his second wish to resurrect his dead buddy, turning Lang into a soulless man with a one-track mind and fails to ever be a terrifying foe. And it seems the failure is more in the character himself than in Lang's performance.

The rest of the cast ranges from average (Tauvia Dawn's Abby is the mother to Lang's son) to cringe-worthily bad (Michelle Pierce as Jake's love interest Olivia), making an already dull story even duller. But the worst offense in 'The Monkey's Paw' is the key aspect which has made Jacobs's original a beloved classic of horror fiction: the cruel irony of being granted one's wishes and desires. The only surprise and twist offered in this TV production is seeing Charles S. Dutton as a detective trying to piece a string of unsolved murders to Jake. Although cinematographer Scott Winig does great to create a dark, atmospheric mood, director Simmons fails to take advantage of it and quickly fizzles into boredom.

Shout! Factory brings 'The Monkey's Paw' to Blu-ray under the distributor's Scream Factory line. The Region A locked, BD25 disc is housed inside a standard blue keepcase with a cardboard slipcover. At startup, viewers are taken straight to a menu screen with full-motion clips and music.

'The Monkey's Paw' debuts on Blu-ray with a 1080p/AVC MPEG-4 encode that alternates between average and excellent. Basically, it's good, but several weak spots bring the overall presentation down a few pegs. Nighttime sequences are where the video falls short, displaying slightly dull contrast and murky blacks, though brightly-lit interiors are actually pretty pleasing.

Daytime scenes with plenty of sunshine are the strongest with bright, crisp whites and accurate brightness levels. Fine object and textural details are very well-defined with revealing facial complexions, especially close-ups. The cinematography leans heavily towards the unattractive teal-orange palette, but primaries remain bold and cleanly-rendered. The 1.78:1 image also suffers from a few minor instances of aliasing and moiré effects.

The made-for-TV chiller improves in the audio department with an excellent DTS-HD Master Audio soundtrack that nicely generates an atmospheric mood. The front soundstage is fairly wide and engaging with good channel separation, flawless movement and convincing off-screen effects. Vocals are pristine and distinct in the center, never drowned out even by the loudest sequences, of which there are a few. The mid-range is clean and detailed with room-penetrating clarity and distinction. Low bass is responsive and weighty, but not particularly powerful or room energizing. Rear activity is, for the most part, satisfying with pleasing directionality, especially when Stephen Lang's character is itching to do harm. Subtle ambient effects during quieter sequences maintain an enjoyable soundfield, making this an amusing lossless mix.

Loosely based on the classic horror short story of the same name, 'The Monkey's Paw' is a drab and dull adaptation with rather uninteresting characters. Aside from Stephen Lang's mildly amusing performance, this made-for-TV movie fails to generate any scare or even create an engaging mood that complements the atmospheric cinematography. The Blu-ray arrives with a strong, yet slightly troubled picture quality, but the audio presentation is surprisingly very good. With only one bonus feature to tempt the curious, the overall package is a rental at best.

Sale Price 17.27
List Price 19.97
Buy Now
3rd Party 15.12
In Stock.
See what people are saying about this story or others
See Comments in Forum
Previous Next
Pre-Orders
Tomorrow's latest releases