Seamlessly interweaving archival war footage and a fictional narrative, this immersive account by Stuart Cooper of one twenty-year-old's journey from basic training to the front lines of D-day brings to life all the terrors and isolation of war with jolting authenticity. 'Overlord,' impressionistically shot by Stanley Kubrick's longtime cinematographer John Alcott, is both a document of World War II and a dreamlike meditation on human smallness in a large, incomprehensible machine.

Generally speaking, war films typically focus on the idea of combat as a physical and emotional battle, one that tests the human spirit as much as it does the body. Many films conventionally center their story on the notion of war as it is in that particular moment, that is, the act of war, regardless of the era being depicted, is the occasion of the story that makes it something worth becoming invested in. Furthermore, films by and large attempt to depict war in a dynamic, stylized fashion, staging battles and skirmishes in the language of the cinema, not necessarily in the language of how it actually was. There is a deliberate and often times necessary distance between the reality of a wartime situation and the depiction of war as a narrative device. In that sense, the stunning genuineness of Stuart Cooper's fantastic 'Overlord,' coupled with the palpable pre-war anxiety of its deeply character-driven narrative, makes it the kind of unconventional war film that should be celebrated as much for its consummate uniqueness, as for its affecting sentiment regarding the loneliness and terror that comes with being a part of a conflict as all consuming as World War II.

That notion is the driving force behind 'Overlord,' as the film follows conscripted British soldier Tom Beddows (Brian Stirner) over the months of his training and days spent waiting until D-day. It is, in a way, a form of psychological torture, as time seems to drag on endlessly, allowing him a chance to ponder what he is missing with family and a potential love interest, all of which leads him to the conclusion that he will not be returning home from the war. To a certain extent, Tom's outlook can be viewed as cynical and even pessimistic, but considering the bloodshed and destruction seen as a result of the protracted conflict with the Germans, it comes across as the response of a realist; the reaction of a man who has internalized what he's witnessed and heard, and applied it to the improbability of his walking away from the battlefield with his life still intact.

Tom's pragmatism, his realistic outlook – or, more appropriately, the realism applied to the character's circumstances – becomes the bridge by which Cooper establishes his use of actual war footage from the film archive of the Imperial War Museum. Here, Cooper blends the real with the fictional, crafting a unique hybrid that elevates the notion of a war film, by including everything from on-the-scene accounts of men battling roaring blazes stemming from bombing campaigns, to a pilot's view of an aircraft firing upon moving trains and convoys, to the grand spectacle of watching bombs pepper the earth below, generating craters that look like tiny pockmarks from the camera's elevated position. 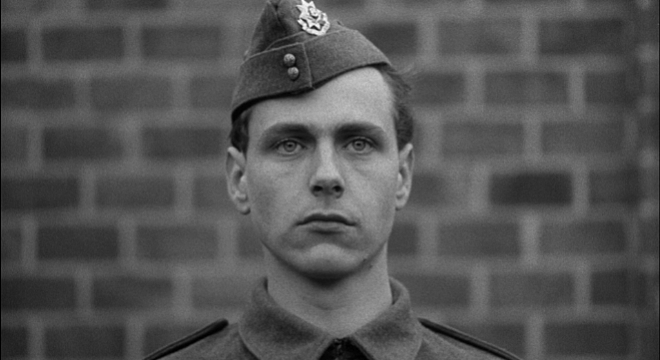 It sounds as though this would result in a disjointed mess, a film that is constantly bounding from the narrative shot by frequent Stanley Kubrick cinematographer John Alcott, to the exquisite, but often harried camerawork of trained soldiers and cameramen. And yet, Cooper and Alcott manage to achieve something rather grand, something very close to total cohesion between the many minutes of archival footage and the film built up around them; and the result is a film grounded in the utter realism and vivid significance of the chaos and human cost of waging war on such a grand, epic, and harrowing scale.

That cohesion of form, the balance of the narrative and the transformation of the archival into a singular storytelling tool keep 'Overlord' from favoring one over the other. Cooper did over two years of research on the film before deciding that the archival footage sufficiently supported a full narrative, and that effort is revealed most plainly in the quiet moments where Tom and his fellow soldiers are quietly stowed away somewhere waiting for D-day to come. Here, the film seamlessly interweaves footage of real soldiers passing the time, being handed out francs, and immediately gambling them away with one another, while Tom fills his lonely days writing letters to his family, and daydreaming about the woman he met and kissed, but never truly managed to know on account of his duty.

Moments like these demonstrate how Cooper and co-screenwriter Christopher Hudson managed to capture the authenticity of such a crucial moment in human history. Moreover, the pair was successful in turning it into a compelling, yet philosophical narrative that ponders the effect one man can truly have, and how small he might feel when being pushed through the machine that was the military during that time. "Cannon fodder, that's what we are," one soldier says. "Die of boredom, die in battle, what's the difference?" That reflection and realization of what it means to be a person (or body) on the field of battle is the kind of pained reductive thought that seems to ground the story of Tom and the story of 'Overlord' even further.

As the film progresses toward the inevitability of D-day, Tom's thoughts become more cryptic and are represented in a series of haunting illusory scenes wherein he is with the woman he shared a brief encounter with. The scenes capture them in various states of aloneness, with their final encounter being the most intimate, ritualistic, and powerfully resonant among them. 'Overlord' isn't so much about war, as it is about how the mind prepares itself for war, and how the awareness granted from that preparation can either afford one peace before the madness, or make them yearn for the chaos just to feel something other than lingering portent and the comprehension of their own pending mortality. 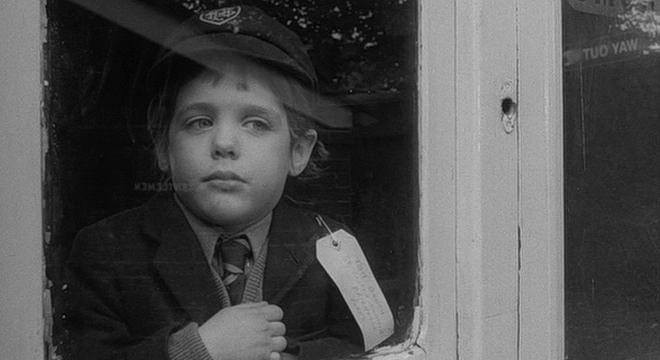 'Overlord' comes from Criterion as a single 50GB disc in the standard clear Criterion case with the 382 on the spine. In addition to the load of special features contained on the disc, there is also a 28-page booklet featuring an essay by critic Kent Jones, a history of the Imperial War Museum, and selected passages from the 'Overlord' novelization by Cooper and Hudson.

'Overlord' has been given a fantastic high-definition digital transfer that maintains the films original 1.66:1 aspect ratio, and presents it in remarkable clarity. Since it is dealing with more than one source, the film naturally looks better in some places than in others. Generally speaking the narrative segments handled by Alcott could be described as looking the best, but considering the age and the circumstances in which the archival footage was captured, those segments have more than earned a pass when it comes to scratches, and the occasional out-of-focus scene. Frankly, the wear and tear or informality of the footage actually creates an incredible sense of realism to the singular aesthetic of the film, and the fact that Cooper and Alcott worked so hard to ensure the footage they shot closely resembled the footage they used from the archives of the Imperial War Museum makes the image quality here even more impressive.

Still, despite the age of both sources, the level of detail and the cleanliness of them both have likely never been better. Much of the dirt, scratches, and other imperfections have been successfully removed from the image, without overdoing it or hurting the source. Meanwhile jitter has been significantly reduced, generating an even stronger cohesion between the archival material and Cooper's film.

Fine detail is strong in almost all of the narrative section, providing a great look at textures and facial features. Meanwhile, the black and white cinematography looks wonderful thanks to consistently high levels of contrast that produce full-bodied blacks and steady white balance. The gray scale is tremendous as well, with very nice shadow delineation and an overall image that is free from banding or crush of any kind.

The Linear PCM 1.0 track is also quite impressive given the nature and age of the film. While it doesn't pack nearly the cinematic wallop of more modern war films, the audio here still provides plenty to listen to and enjoy. Mostly, though, it concentrates on its number one priority, which is to ensure that the dialogue is clean and crisp, and it does so quite well. And yet the sound manages to be deep and dynamic in many cases as well, highlighting music as much as it does the sound effects of chaotic scenes involving soldiers and enemy combatants. The audio generally is only asked to handle one element at a time, but, on occasion, it demonstrates a surprising amount of balance that highlights the most important element in any given scene, while almost imperceptibly pushing the others into the background.

Like the image, the audio has been given an impressive cleaning, where in scratches, hissing, and obtrusive clicks have been removed, leaving 'Overlord' with an impressive sounding monaural track that works quite well with the film.

Commentary by Director Stuart Cooper and Brian Stirner - Recorded in 2006, this commentary features Cooper and Stirner running separate commentaries that, like the film itself, manage to be two separate sources that combine into a cohesive whole. Cooper and Stirner are both quite engaging, with the director offering more filmmaking information and the actor working with more anecdotal elements.

Soldiers Journals - Excerpts from two soldiers' journals are read aloud by Brian Stirner (Tom). These features are audio over a still from the film.

Introduction by Stuart Cooper (HD, 2 min.) - Cooper talks about how important the use of diaries and letters were in making the screenplay.

Capa Influences Cooper (HD, 8 min.) - Photographer Robert Capa took 106 images on Omaha Beach on D-day. Here, Stuart Cooper discusses how she was influenced by Capa's work and how the blurriness of the photos afforded them a surreal quality that the director thought accurately conveyed the chaos and confusion of the day.

Germany Calling (HD, 2 min.) – This is footage from Nazi propaganda films that was re-edited to ridicule Hitler and the German forces.

Cameramen at War (SD, 15 min.) - This tribute to newsreel and service film unit cameramen was produced by the British Ministry of Information.

A Test of Violence (HD, 14 min.) - 1969 short film that Stuart Cooper made about the work of Spanish artist Juan Genovés.

Ostensibly about its protagonist's mental preparation for combat and the likelihood he will be facing his final days, 'Overlord' manages to be a war film unlike any other. Its narrative is like Tom Beddows: it exists outside the situation, while being constantly aware of what is occurring around it. Meanwhile, with the addition of some stunning archival footage, which was placed into the film with great care and purpose, Stuart Cooper shows both sides to a tremendous conflict; one internal and one wholly external. That juxtaposition of discord is phenomenally felt throughout the film's brisk, but comprehensive storyline. With a great transfer, very nice audio, and a host of fascinating extras, this one comes highly recommended.

Sale Price 20.19
List Price 39.95
Buy Now
3rd Party 20.99
In Stock.
See what people are saying about this story or others
See Comments in Forum
Previous Next
Pre-Orders
Tomorrow's latest releases