Rob Zombie returns to the director's chair with his version of The Munsters. Set as an origin story for the lovable duo Harman and Lily, Zombie explores their life before Mockingbird Lane while utilizing that old style of comedy. Unfortunately, it just doesn't work on almost any level, and with an almost two-hour run time, it feels twice as long. The video and audio elements have many issues and the bonus features are decent enough but lack any cast or crew interviews. For those that are curious, Give It A Rent.

In the mid-1960s, America fell in love with the oddball monster family on 1313 Mockingbird Lane named The Munsters. Their strange and abnormal behaviors and wacky embellishments had audiences across the country laughing out loud for the two years it aired. That unique style and feel created its worldwide fandom where everyone loved their witty monster traditions while only wanting that iconic American Dream. After a return series in the 80s, many people have tried to reboot this formula for film or television with all productions not making the cut... until now. With famous rock n' roll artists and horror director Rob Zombie at the helm, it's not the craziest choice, but this new version of The Munsters is a large misfire, despite its best efforts to satisfy fans young, old, and new. 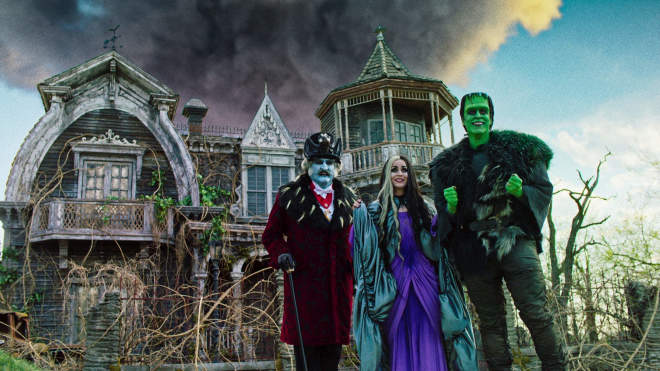 Rob Zombie is one of the maestros of horror films. With his first feature outing of House of 1000 Corpses, he captured horror fans off-guard with a twisted, yet super fun and dark horror movie that introduced some of the best and most memorable horror movie characters. Zombie capitalized on its popularity with its sequel The Devil's Rejects which played out more like a sibling to Natural Born Killers than an actual horror film. Zombie entered the realm with Lords Of Salem which is in essence and similar in tone to The Shining. Since then, Zombie has made some quick, violent, fun horror movies that gravitate more towards gore, along with two remakes of that famous Halloween franchise that has divided fans for a while. 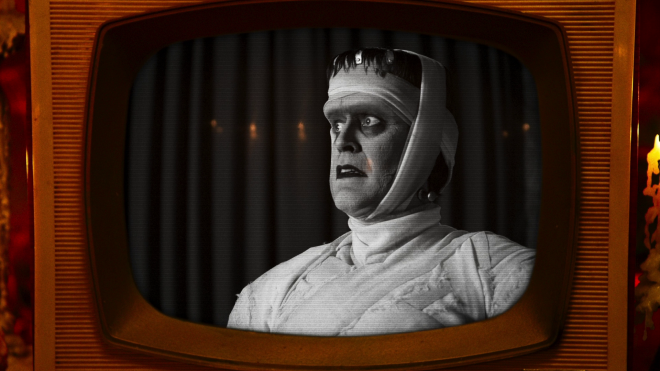 With Zombie's resume, he's no stranger to a remake and reboot and thus arrived on the set of his vision on The Munsters which serves as an origin story of how those two lovebirds came to be and moved to Mockingbird Lane. It's official now, Rob Zombie has made a PG film that mixes those vintage horror tv tropes and comedy. Zombie is an expert at a certain kind of comedy. In The Devil's Rejects, that dark sense of humor is rampant and conjures up those uncomfortable laughs as those villains who everyone roots for, deliver some memorable funny lines about ice cream or last night's dreams. But with The Munsters here, it's a comedy that is straightforward and made for television that would only be funny several decades ago. Maybe.

Comedy has evolved over the years from the silliness of Mel Brooks to the gross-out comedy of The Farrelly Brothers, which morphed into the stoner comedies of Judd Apatow, and now to something completely different that crosses into multi-verses and meta humor. The humor that Zombie enlists in this reboot is spot on for something that came out some sixty years ago and just doesn't work in these current times no matter how fresh or clean the image looks. It might have worked for a 22-minute comeback special, but definitely not for an almost two-hour feature film that doesn't even make it to Mockingbird Lane until the final moments of the movie. 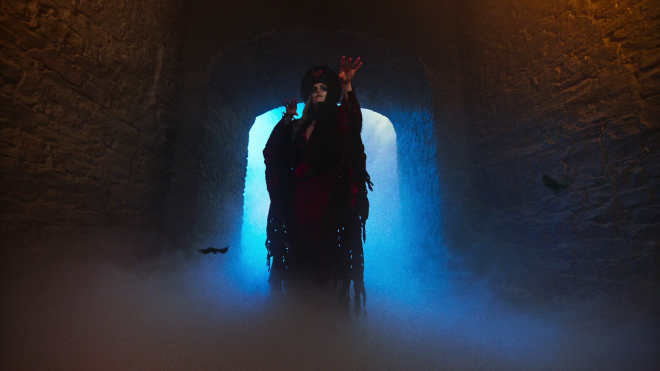 This remake acts as an origin story of this family where Lily (Sheri Moon Zombie) is searching for love in Transylvania. After no luck with some iconic monsters that her dad The Count (Daniel Roebuck) set her up with, the pair spot the newly reconfigured reanimated Herman (Jeff Daniel Phillips) on television. Herman becomes popular as he sings, dances, and becomes an entertainer, but soon enough the pair fall in love and keep the family money running. But of course, there are those monsters that want to destroy this new union so obstacles appear.

Like Zombie's Halloween films, he was obsessed with telling Micheal's origin story, which is what he does here. But like those Halloween films, Zombie again spends far too much time with those elements before he gets to what everyone is here to see. That's the case with The Munsters as the family doesn't even arrive in the United States until the final minutes of the film. None of the jokes land well and just feels like a cringe-induced movie that only wants to showcase all the famous characters and cameos from the original show with obsessive fan service. Zombie's use of these dynamic colors is a lot of fun, but it comes across as a stage play and not a feature film that borders horror and modern comedy. 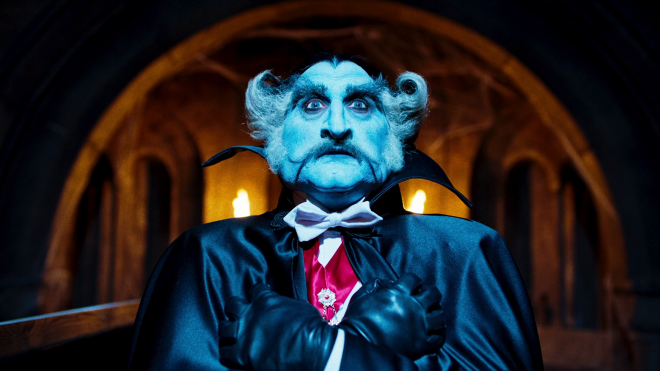 Performances are over-the-top and Zombie's camera loves to twist, twirl, turn upside down, and swoop at unconventional places that make no sense with this type of film. It's easy to see how much love Zombie has for the original show here, but in the end, he wasn't the right choice to helm this project. Even though everyone can see the love that went into this project, its humor, horror, and fun just miss the landing spot completely. It's a huge misfire with some impressive and unique-looking sets and costumes.

The Blu-ray: Vital Disc Stats
The Munsters scares its way to Blu-ray via Universal. The one disc is packed inside a hard, blue plastic case with a cardboard sleeve. The artwork consists of the three family members looking out in front of their creepy house. This says it's a collector's edition, but there's nothing collector about it. There are no inserts or digital codes. 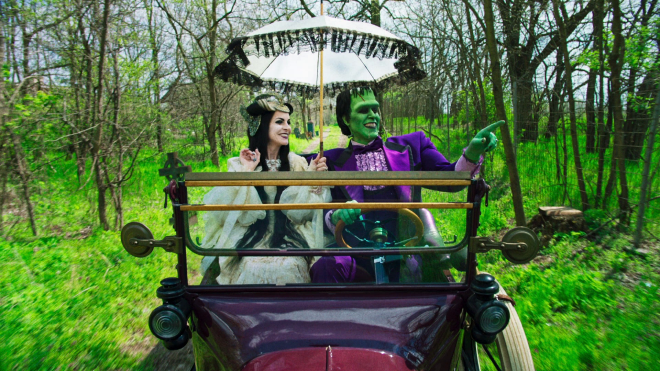 The Munsters comes with a 1080p HD transfer and looks mighty colorful. The color palette is bright, bold, rich, and fantastic. Going from the original black and white palette to this intense old-school comic book color palette is highly entertaining. Purples, greens, blues, yellows, and reds all look amazing. Each scene is heavily filtered and nuanced in those creepy colors that contrast perfectly with Halloween decorations. Even though the colors are distracting because there is such an abundance of them for no real reason, it's pretty to look at.

The detail can be sharp at times, but most of the time comes across as fuzzy and murky. There is so much noise, banding, and fuzz around faces and backgrounds of smoke that it becomes quite affecting in a negative way. It gets so bad that individual hairs and textures in clothing become hindered by their detail. Black levels are somewhat inky, but since there are so many lighting filters and neon lighting in the background, there's barely any room for a total blackout. Again, there are issues with heavy noise and banding, along with the film looking like it went through a digital carwash and came out as a soap opera. 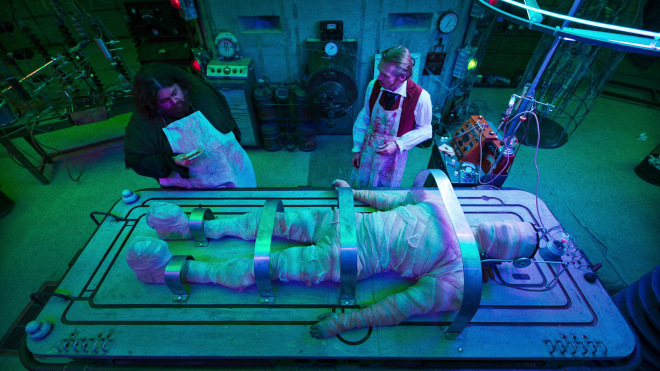 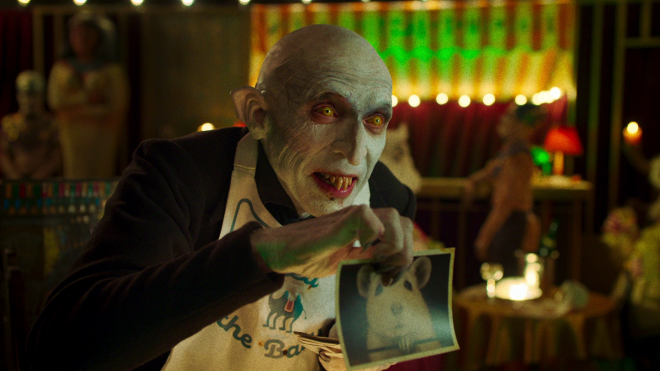 This release comes with a lossless DTS-HD MA 5.1 audio mix and doesn't fully utilize the entire speaker system. This is a PG comedy, so most of the film is centered on the front channels with only a few ambient sound effects coming through the rear speakers. Comedic haunting sounds, splats, and cartoonish noises all sound off throughout and are never as robust as one would like. The low-end rumbles with its bass decently enough when music plays on the screen or inside a dance party. Other than that, there's not much heft to the sound design. Dialogue is clean and clear with no audio issues. There just isn't a ton of big sounds or anything that feels immersive here, despite it looking like there might be. 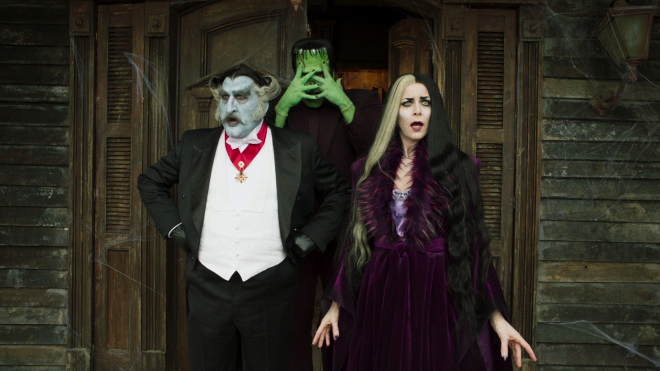 A commentary track and an hour-long behind-the-scenes video diary are included. 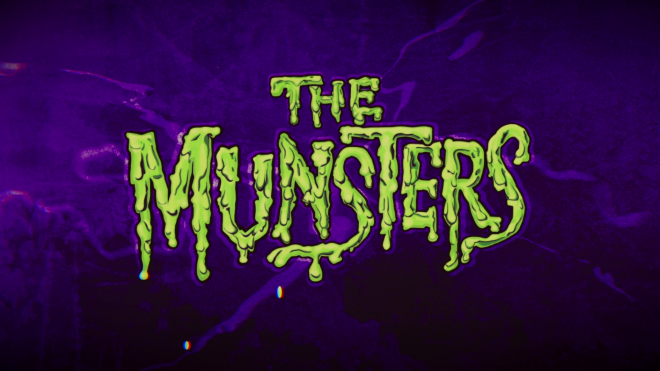 This new version of The Munsters is not the remake anybody deserved. It's a solid and unique effort by a very capable and good director, but it just doesn't work for 2022 with Zombie's vision. It might be pretty to look at for a little while, but after almost two hours of unfunny jokes and wild camera movements, this film just doesn't cut the cake. It's best to think of it as Rob Zombie's The Munsters and not the fan-favorite television series. The video and audio presentations are both less than impressive and the bonus features could have been better. For those who are extremely curious - Rent It First!