One of the most wildly successful horror franchises in recent cinematic history, the found footage spookfest Paranormal Activity The Ultimate Chills Collection comes home to haunt your Halloween viewing. While not everyone’s brand of scares, this franchise deserves your attention if you’re creeped out by the things that go bump in the night and those stray inexplicable shadows that crawl over your bedroom walls. This 7-film 9-disc collection combines all of the previously available creepy features and the most recent straight-to-streaming entry in a new deluxe boxset offering the same A/V presentations, bonus features, and an additional feature-length documentary, and decal sticker for a little extra swag. They may not all be winners but the series is fun for a couple of good spooks and jumps, but this set really is best For Fans Only

There are few films that spawn multi-entry franchises that run through theaters to satiate fans’ rabid thrust for terror. Halloween, Friday the 13th, A Nightmare on Elm Street, and Saw are just some of the heavy hitters to grace the big screen with numerous (and counting) entries. But 2007’s low-budget sensation Paranormal Activity captured the attention of horror fans - and Hollywood. Suddenly, the shoe-string “found footage” film became all the rage and launched Jason Blum as a horror producer heavy hitter all his own. With seven films of varying quality, Paranormal Activity was the high-tech low-fi horror franchise of a generation bringing in mega-millions at the box office. 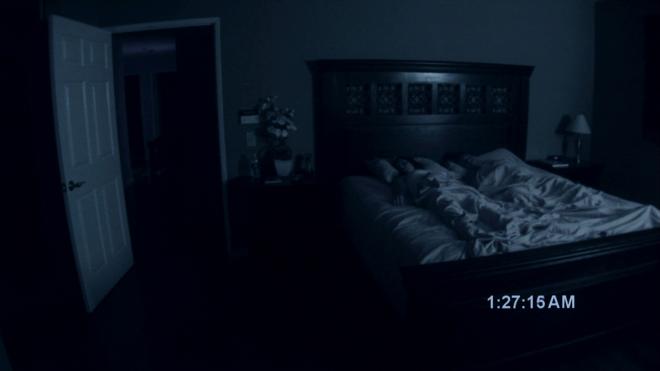 Some love this franchise, while others are indifferent or dismissive entirely. As for myself, I’m amused by them. I don’t think they’re “scary” necessarily but there are some good jump frights and genuinely disturbing imagery for the casual horror fan to feast on. If nothing else I admire the first film for its gumption. Made with next to no cash and an enormous amount of creativity, the film is a prime example of how a lot can be achieved with very little. But then much like its found footage sibling The Blair Witch Project, the film was a massive hit at the box office and a sequel was fast-tracked. Unlike Blair Witch 2: Book of Shadows (still the best episode of Scooby-Doo ever made), Paranormal Activity 2 actually made a boatload of cash propelling what should have been a one-and-done horror feature into a sprawling and spiraling franchise.

Much like The Conjuring, the aim seemed to be to punch out another entry in the franchise as fast as possible - or at least a semi-related side story - no matter how unnecessary. And then it kept going and going before hitting a wall with Paranormal Activity: The Ghost Dimension. A few years rest and we picked up 2021’s straight-to-streaming sequel Paranormal Activity: Next of Kin. While this movie is certainly an improvement over the past few sequels, that’s not exactly a heavy bat to swing. But at the same time, it wasn’t all that refreshing and really was just tapping into a well that had long ago dried to a mere trickle of its former self. I’ll admit there are a few good jump scares here and there and changing locations and exploring a new avenue of haunted culture certainly helped keep things interesting and hold your attention. 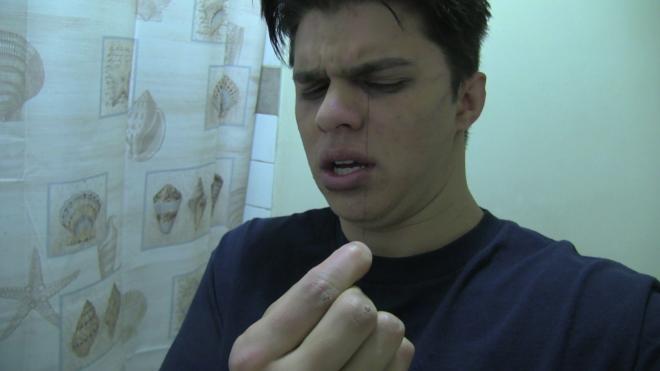 As I said at the outset, I do find these movies amusing, but hardly special or amazing. I know some folks who are legit scared by these films, but they’re also far more spiritually afflicted than I am. With rare cases of films like The Exorcist, the first Conjuring film, The Fog, Poltergeist, The Changeling, or 1963’s The Haunting - ghosts, spirits, or demons just don’t scare me. Or rather most of the films that play within those realms of horror don’t really scare me. Most films require an amount of suspension of disbelief to be effective, especially horror films, but ghostly horror flicks require actual belief and I just don’t rank amongst that crowd. My brain is too quick to apply logic or explain away phenomena. If the haunting or curse is too complicated my brain just automatically clicks out and it’s hard to jump back in again with much enthusiasm. The Paranormal Activity films may not amount to a whole lot but each has its charms. The first film, in my opinion, is still the best but each entry has its moments with their own shocks to share.

Here's how I personally rank the films of the franchise - I've also linked to our past reviews we've published from the franchise:

Paranormal Activity The Marked Ones - 3.5/5

Paranormal Activity Next of Kin - 3/5 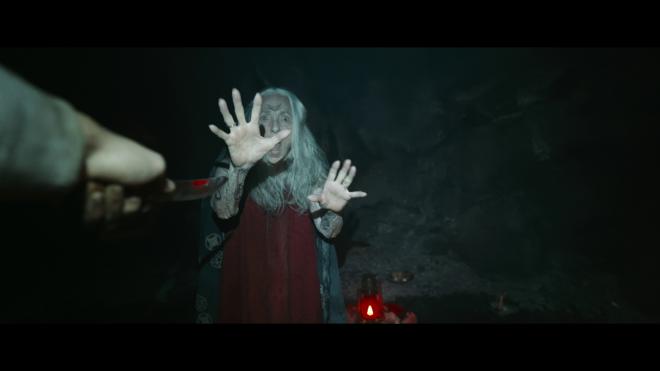 Vital Disc Stats: The Blu-ray
Paranormal Activity: The Ultimate Chills Collection brings all seven films of the series together in one big box set for the first time. Essentially all of the previously released discs have been bundled for this set with each getting its own clear case with reversible insert artwork that reflects something closer to the original theatrical posters. All of the cases are held together with a thin paper-stock box. For the sixth film, the Blu-ray 3-D disc is also included making it the lone two-disc set for any of the films. Another case and disc dedicated to the feature-length documentary Unknown Dimension: The Story of Paranormal Activity. Also included are a window decal and digital copies for each film. The copies are from Paramount so they are not Movies Anywhere compatible. Each disc loads to its own respective main menu with traditional navigation options. 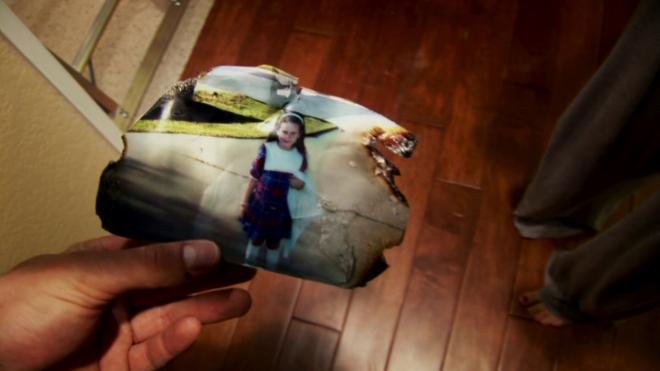 If anyone has been keeping up with the franchise up till now, the series has always had a lackluster appearance on Blu-ray. That’s mostly because of how the films were shot in POV but also the cameras used. Gradually with each entry, the quality of the equipment improved but a lot of effort was made to keep it looking like an inexpensive spookfest so by the time you’re getting into The Marked Ones or The Ghost Dimension things certainly look better but again each film works extra hard to add any number of anomalies and noise to the image. Details, colors, and depth, all fluctuate depending on the film and then what cameras were used or how the scene is supposed to look to conjure up those creepy shadows and jumps.

The most recent entry Next of Kin is a clear improvement over past outings without the overly obvious additional noise and artifacts. It still has that rough-around-the-edges POV style but there’s a little more spit and polish with healthier colors and image depth. There are still some additional artifacts by design but nothing serious or overplayed. 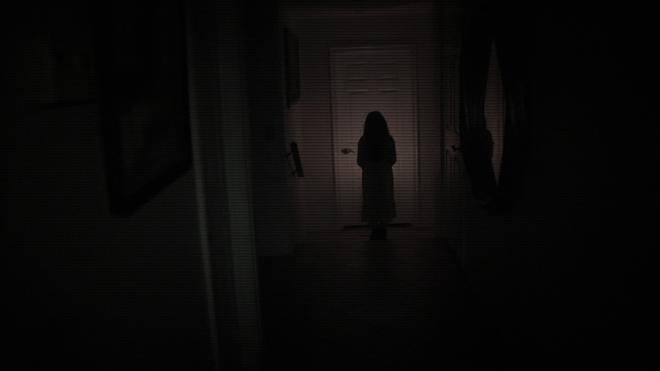 To jump back one entry, The Ghost Dimension also comes with a 3D Blu-ray disc which really isn’t all that much to look at. I saw this one in theaters and much like that experience, the Blu-ray 3-D doesn’t offer much depth. It’s also weird that this is a found footage movie and yet we’re supposed to understand they’re somehow shooting it in 3-D? There are some decent moments here and there, but there are long stretches without any kind of 3-D effect at all. Take your glasses on and off and you won’t see much if any difference.

Paranormal Activity The Marked Ones - 4/5 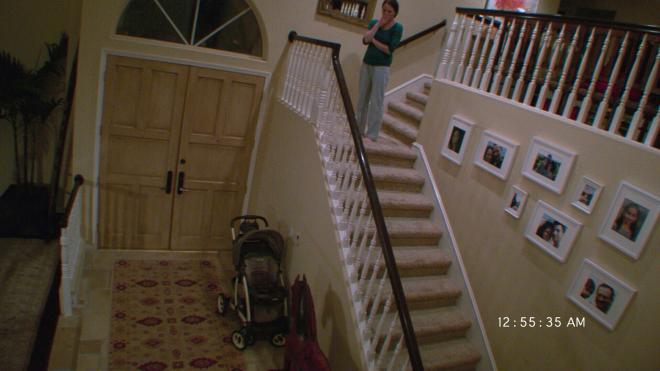 Much like the video transfers, the earliest Paranormal Activity films all featured DTS-HD MA 5.1 audio mixes that made very little use of the format. Outside of some extra “BOO!” moments, there’s not a whole lot to keep the channels active and moving. There isn’t a score to speak of so the mixes all sound relatively flat and hollow. By the time we get to The Marked Ones, The Ghost Dimension, and Next of Kin, the sound design is a notable improvement sounding fuller, more expansive, and actually using those extra channels to work up some decent scares and jumps. Even without a score to help keep the mood up, it’s all about how the sound effects and dialog are utilized to fill the space and dead air. 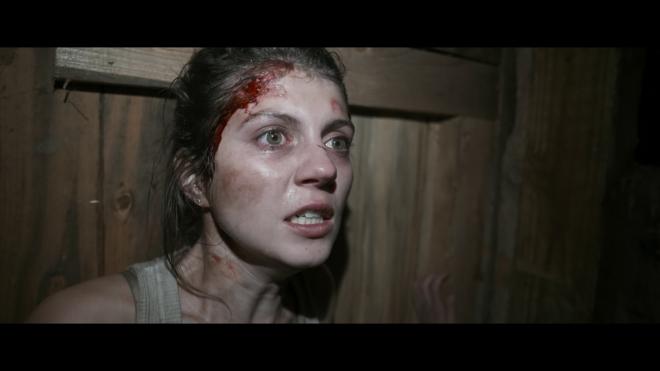 Paranormal Activity The Marked Ones - 4/5 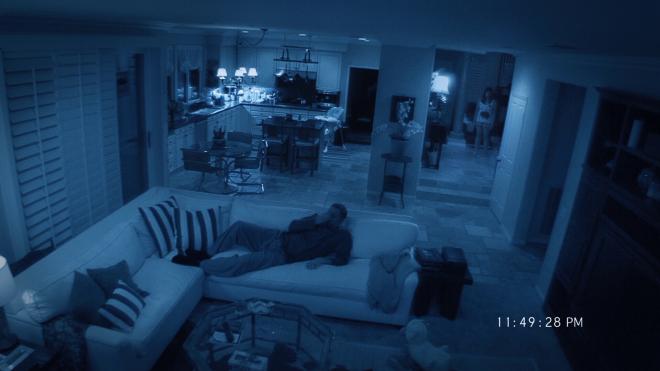 Pretty well par for the course with this franchise, bonus features aren’t exactly plentiful from one entry to the next, in some cases you’re lucky to get 15-20 minutes of pretty boring deleted scenes. Part of that is because it feels like the franchise is trying to ape The Blair Witch Project and its brilliant marketing without giving anything away about the production. The main menus are sparse, to say the least. With each entry we do start to get a few more little bits and pieces, but not a lot. Certainly not anything close to the more desirable “Film School on a Disc” load of extras. However, this box set does come with the very interesting Unknown Dimensions: The Story of Paranormal Activity which offers quite a bit of insight into the making of the films, the genesis of the found footage sub-genre, with cast and crew interviews as well as behind-the-scenes materials. So if you’re a fan, beyond also picking up Next of Kin on disc, you’re also getting a welcome extra documentary with this box set.

Paranormal Activity The Marked Ones

Paranormal Activity Next of Kin 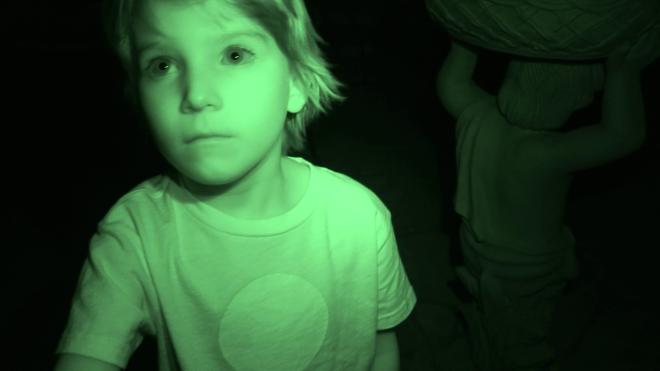 The Paranormal Activity franchise may not be the greatest set of films to grace the big screen, but they are entertaining. My only real gripe was the number of imitators that spiraled out aiming to capitalize on a vague similarity to these films. Like any horror franchise, there are a couple of duds in the lot but there are a couple of solid flicks here. It all depends on if you find this sort of thing scary. Generally, I don’t get spooked by moving shadows or “what was that bump?” sort of scares, but the first film is still very good stuff and even if the sequels get to be a little silly and repetitive there are some creepy moments and some good jumps to be enjoyed.

Paramount Home Video brings together all seven films of the franchise in one big box set - including the straight-to-streaming Paranormal Activity Next of Kin making its disc debut. With the first six films being the exact same discs, the transfers and audio are what they are and if you were hoping for an upgrade, that's not in this set. When you get to the final three films video quality and audio experiences liven up considerably. A mixed bag, but true to the films I guess. Bonus features are the same for each individual movie but thankfully Paramount included a new feature-length documentary about the franchise that’s well worth taking a look at. At the end of the day this Ultimate Chills Collection box set is for the true dedicated and die-hard Paranormal Activity aficionados who need to have every film in the collection. For Fans Only.