Scott Derrickson returns to his horror roots with the supernatural child abduction chiller The Black Phone. Based on the Joe Hill short story, the film stays true to its literary origins while expanding in necessary ways to fill out the story with a genuinely terrifying performance from Ethan Hawke. Universal Studios rings The Black Phone to Blu-ray with an excellent transfer and an unsettlingly creepy DTS-HD MA 7.1 audio mix with a nice range of bonus features to match. Recommended.

In a small northern suburb of Denver, Colorado, children are going missing. The cops and the press call the kidnapper “the Grabber.” No one sees anything. No one hears anything. The kids just vanish with a black balloon left at the scene. With the news on T.V. and the papers, it’s impossible for Finney and his younger sister Gwen not to notice the stories. When Finney is grabbed by a man in a black van with black balloons, he’s imprisoned in a soundproof basement… with a disconnected black phone mounted on the wall. Only when the phone rings it isn’t help on the line, it’s the souls of The Grabber’s victims.

While the average moviegoer may know Scott Derrickson for his efforts with Doctor Strange, horror is where he got his start with the underappreciated director-to-video Hellraiser: Inferno, and bigger entries like Sinister and The Exorcism of Emily Rose. He also helmed the remake of The Day the Earth Stood Still - but I won’t hold that against him. Large or small budget, Derrickson has a knack for building terror and suspense while pulling great performances from his cast. The Black Phone is no exception in that department.

Where The Black Phone succeeds best is with its cast. At the top of the pack is Ethan Hawke as the masked Grabber. He may not have the most screentime, but he instantly makes an impression - even through a mask designed by the legendary Tom Savini. Mason Thames does a tremendous job as Finney carrying a lot of the emotional and physical load of the film. Madeleine McGraw holds her own as the bratty foul-mouthed sister. James Ransone turns in another energetic performance as the hapless Max. Last but not least, we have a small but great turn from Jeremy Davies who somehow always knows how to steal a scene.

Given the familial relationship, it shouldn’t be much of a surprise that Joe Hill’s story feels very much like a stripped-down version of It. Keeping the supernatural elements to a minimum, the story is lean and tight and to the point. Placing the story in the 1970s removes a lot of technological “what-ifery” from the equation. No cell phones. No internet. The rumors and stories of the Grabber circulate by word-of-mouth until he becomes a creepy legend. It also removes the ever-so-lame “track the device” cliche from the pair of detectives featured in the film. It explains just enough to set the stage and let you become invested with the story before getting out of the way to let the creepiness do its work. 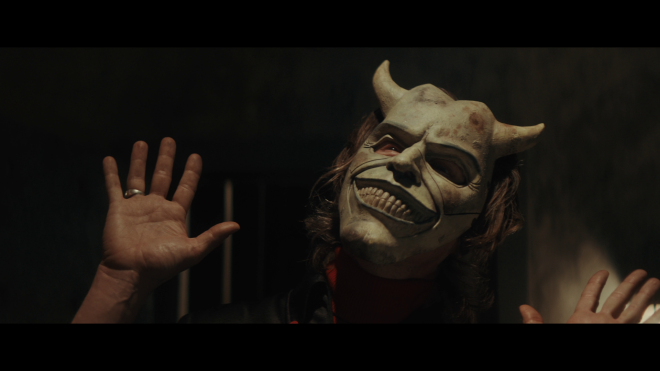 Where I have a slight issue with The Black Phone it’s with the ending. Not that the solution is a problem, the film sets it up perfectly peppering the clues bit by bit. The issue I had was how abrupt it was. All of a sudden we’re into the film’s end game and it all moves so quickly it’s over before you had a chance to really blink. It’s a small gripe in the scheme of things but it’s the one I’ve got. I can see some folks getting nitpicky with the premise and a few areas here and there, but overall I really enjoyed this chiller little thriller.

All around, The Black Phone was a better horror film than expected, and certainly better than what the trailers were pitching to the target audience. I can see how this wasn’t exactly an easy film to market and distill down to a 2-minute trailer without giving away the whole show. Even with some familiarity with the original short story, this adaptation still managed to put a suspenseful lump in my throat. Again, that’s largely because Ethan Hawke is just so damn scary. He’s on quite the run these days picking very interesting and dynamic roles. Not to suggest he never did, but his output lately has been fire. Even through a mask he delivers a creepy and disturbing performance and quite honestly makes The Black Phone that much stronger.

Vital Disc Stats: The Blu-ray
The Black Phone calls up a two-disc Blu-ray + DVD + Digital release from Universal Studios. Pressed on a BD-50 disc, the discs are housed in a two-disc case with individual trays with identical slipcover artwork. The disc loads to trailers for other Universal releases before arriving at a static image main menu with the bonus features panel along the right side of the screen. 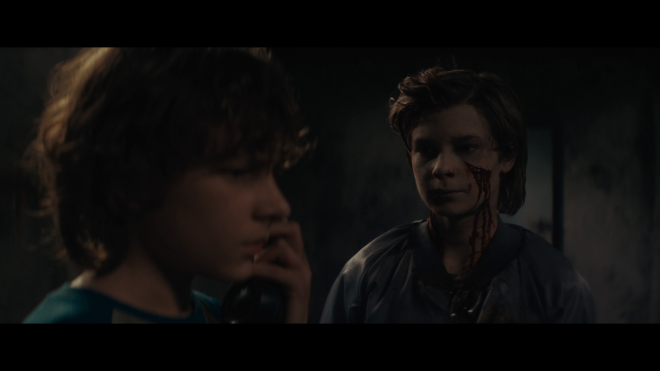 The Black Phone clicks in with an impressive 1080p 2.39:1 transfer. The film takes place in the late 70s and the production design, some of the camera techniques, and color scheme aim to replicate that aesthetic. The image predominantly has a dull yellow/brown coloring so primaries red, blue, and yellow are skewed in that direction. Throughout details are terrific giving a full range of textures to appreciate. Black levels are on point with nice creepy dark shadows where you constantly question what could be hiding in that corner, and more often than not it’s a pretty good jump scare! 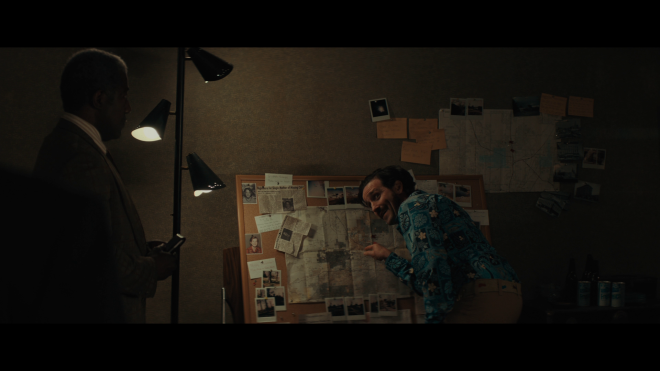 There are sections of the film that were shot on Super 8 so it has a very deliberate appearance for those scenes. There are a couple of digital shots, one particular murder especially, that kind of hover and don’t quite come home but overall there aren’t any compression anomalies or issues to report. All in all a strong transfer. This was reportedly finished with a 4K DI, so it’s a shame we’re not getting another new horror movie on the format, but this Blu-ray holds its own. Maybe the import markets will treat us. 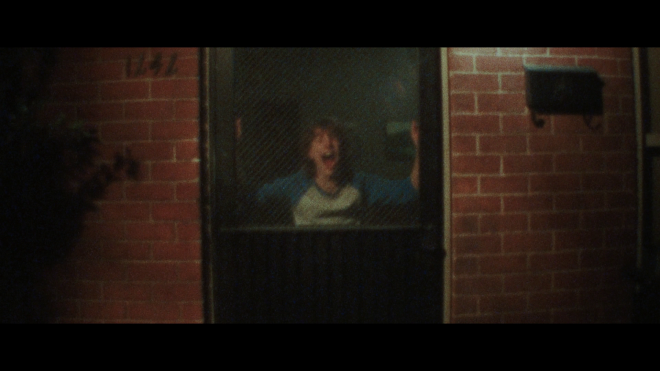 I’ve long held that a horror movie is only as good as its audio track. If the audio isn’t complementing the visuals it falls apart. To that end, this is a great DTS-HD MA 7.1 track. This is a creepy eerie story so while there are loud and dynamic sections, it relishes the quiet moments where a small scrape in the left channel or a creepy voice echoing around in the surrounds comes to life. Throughout, the dialog is clean and clear and never at issue, even Hawke who talks almost entirely behind a mask. Mark Korven’s score perfectly accents the film amping up the tension and dread throughout. Imaging is on point, again even in those quiet scenes there’s something moving around in the surrounds. Levels are e ven without any need to keep an eye on the volume. 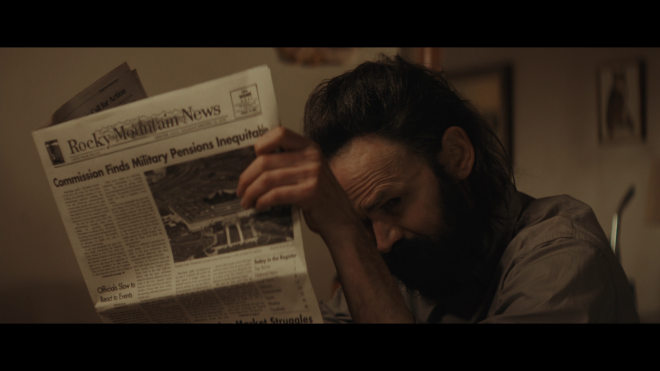 Bonus features for The Black Phone are fairly decent. At the top of the pack, we have an excellent audio commentary with Scott Derrickson who goes into great detail about the film’s production, the personal themes he added to the film including the setting and location, as well as the want for it to take place in the 1970s without glorifying the era. It’s a great scene-specific track so give it a listen. After that, we get some deleted scenes that you can feel why they didn’t make the cut, some interviews, and making-of materials that are pretty basic EPK materials but still informative. Also included is Scott Derrickson’s short story Shadowprowler which is a pretty slick little show to take a gander at. 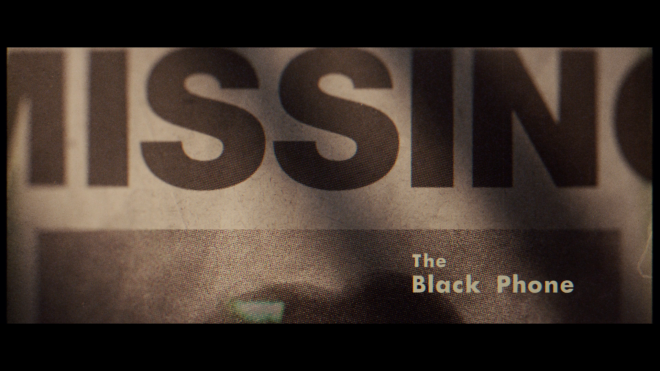 The Black Phone is a solid little chiller thriller of a horror picture. A simple and to-the-point concept is brought to life with an excellent script and direction from Scott Derrickson and a great cast. Ethan Hawke certainly commands the screen as our resident psychopath but the younger cast deserves serious kudos for their efforts. Without a 4K Ultra HD Blu-ray release, this Blu-ray will have to hold us over. The A/V presentation is uniformly great with a crisp clean image and a creepy effective DTS-HD MA 7.1 track. Tack on some respectable bonus features and you have a new fright flick worth checking out. Recommended.