Paul Newman commands the screen as only he can in Nobody's Fool, writer-director Robert Benton's underrated, understated adaptation of Richard Russo's novel about an aged screw-up who becomes a late-blooming hero to his family and friends in a sleepy rural town. Newman earned a well-deserved Oscar nomination for his masterful portrayal, as did Benton for his lyrical screenplay. Imprint's limited edition Blu-ray honors this gem of a film with a terrific transfer, nuanced multi-channel audio, and a hefty supplemental package. Nobody's Fool will strike a chord with everybody, and it comes very Highly Recommended.

That's one of the clever taglines for Nobody's Fool, a warm, wonderful low-key film from Robert Benton. The Oscar-winning writer-director of such classics as Kramer vs. Kramer and Places in the Heart brings his inimitable flair for chronicling the human condition to this sensitive adaptation of Richard Russo's novel about a curmudgeonly, sixty-something screw-up who gets a chance to make amends for a lifetime of selfish, irresponsible decisions when his estranged son and family arrive in the sleepy, snowy town of North Bay in upstate New York for Thanksgiving.

Donald "Sully" Sullivan (Paul Newman) isn't used to giving thanks. He deserted his wife and baby son decades ago without a backward glance and constantly brings petty lawsuits against Carl Roebuck (Bruce Willis), the cocky, smug owner of the construction company for which he reluctantly works.  A lovable yet exasperating loser who bumbles and stumbles his way through life, Sully can't catch a break, but doesn't seem to want one either. He's content to play poker with his cronies, hang out at the local bar, bet daily on a trifecta that never pays off, and make some small-town mischief when he gets bored.

When his grown son Peter (Dylan Walsh) arrives with his wife and two small boys, circumstances force Sully to take a long, hard look at his life and reflect on how his actions have affected the people around him. He begins to step up, trying to mend broken relationships and forge new ones, come to terms with his checkered past, and look to the future. In the process, Sully learns not only how much he cares about everyone in town, but also how much the town cares about - and has come to depend on - him. 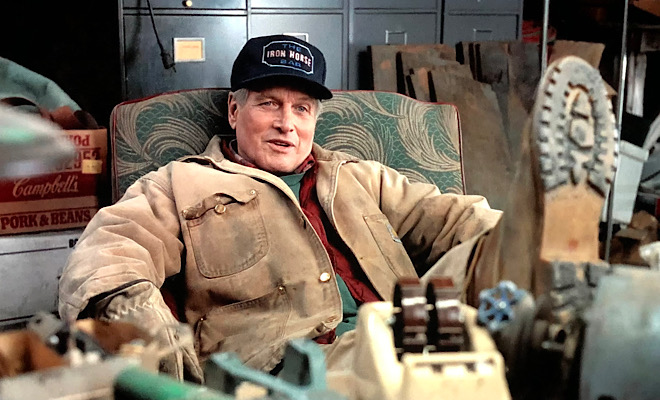 That all may sound trite and a little sappy, and there are definitely moments when Nobody's Fool crosses those unfortunate lines, but for the most part, the film depicts honest emotions and interpersonal dynamics in a forthright yet tender manner that rings true. Benton's Oscar-nominated script is packed with small beats that resonate and memorable characters with whom we can easily relate, and though the story's themes are hardly groundbreaking, they hit home.

In his capacity as director, Benton crafts a slow, easy rhythm that gently strings us along and allows each scene to flow fluidly into the next. Some might find the languorous style a bit labored, but by taking his time, Benton makes us feel a part of Sully's world and helps us get to know all the characters, no matter how minor. Each one gets a chance to shine, even if just for a fleeting moment, and it's that keen attention to detail that helps Nobody's Fool rise above other movies in its class. 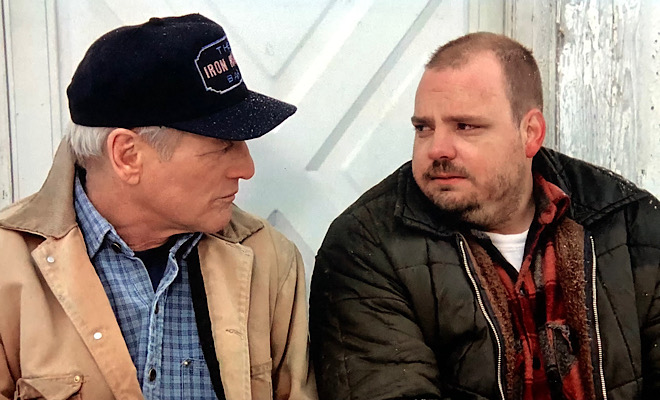 Few directors so consistently attract such esteemed performers to their projects and use them so effectively. (In addition to Newman, Willis, and Walsh, the Nobody's Fool ensemble includes Jessica Tandy, Melanie Griffith, the fantastic Pruitt Taylor Vince, a young Philip Seymour Hoffman, Gene Saks, Josef Sommer, Philip Bosco, and Margo Martindale.) Benton not only casts his films well, he gives his actors the freedom to contribute their best work. From legends like Newman to a relative unknown like the 27-year-old Hoffman, who plays an obnoxious town cop out to nail Sully, Benton nurtures and spotlights the people who bring his films to life.

Newman is simply brilliant as the rumpled, recalcitrant Sully, earning the last of his eight Oscar nominations for Best Actor for his relaxed yet meticulously crafted and nuanced portrayal. (He would nab his only Best Supporting Actor nod eight years later for Road to Perdition.) Newman completely embodies Sully, wearing him as comfortably as he wears his scuffed and tattered old clothes, and never for a minute looks like he's acting. Acerbic and cantankerous one minute and rueful, tender, and wise the next, Newman speaks sparingly, yet his actions speak volumes about who Sully was, who he is now, and who he hopes to become. I've always admired Newman's work, but never more so than here. His performance is a master class in understatement.

Newman, though, isn't the only show business icon in Nobody's Fool. In her final role, the radiant Tandy maximizes every moment as Miss Beryl, the rich widow who rents Sully a room in her home and verbally spars with him. The Oscar-winning actress, who worked with Benton a dozen years earlier in his Hitchcockian thriller Still of the Night, is feisty and spry in her several scenes, but was suffering from cancer during shooting and would pass away at age 85 just a few months prior to the movie's release. (Benton dedicates Nobody's Fool to her with a special credit at the end of the film.) MIss Beryl is not a meaty part, but Tandy, who created the role of Blanche DuBois in the original Broadway production of A Streetcar Named Desire almost a half century earlier, makes it memorable. 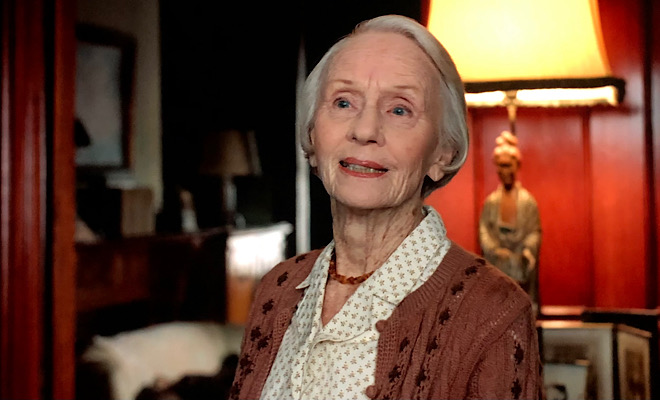 Willis took a break from action blockbusters and traded his $15 million salary for union scale to appear in the film (he also refused any billing), and fully embraces the wise-ass, philandering Carl. Griffith also makes a notable impression as Toby, his neglected, resentful, and hurt wife who charmingly flirts with Sully throughout the tale. It's the type of sexy yet sensitive role I could totally see Marilyn Monroe playing and bringing to it her unique brand of kittenish allure and heartbreaking vulnerability. (How Monroe would have loved the moment when Toby lifts her sweater and flashes Sully.) Griffith files one of her best performances, but I couldn't get Monroe out of my head as I watched Griffith, whose breathy voice also resembles Marilyn's.

Like a warm blanket, it's easy to wrap yourself up in Nobody's Fool and cozy up to the colorful characters who populate and wander into North Bay. In turbulent times like these, Nobody's Fool hits the spot, reminding us what really matters in life, how essential it is to get along with and support others, and that it's never too late to make amends and make peace. It's a timeless message, but one well worth repeating, and it just might play better today than it did when this quiet, intimate motion picture was originally released almost three decades ago. Movies like Nobody's Fool just don't get made anymore and directors like Benton largely no longer exist. I wish they did. 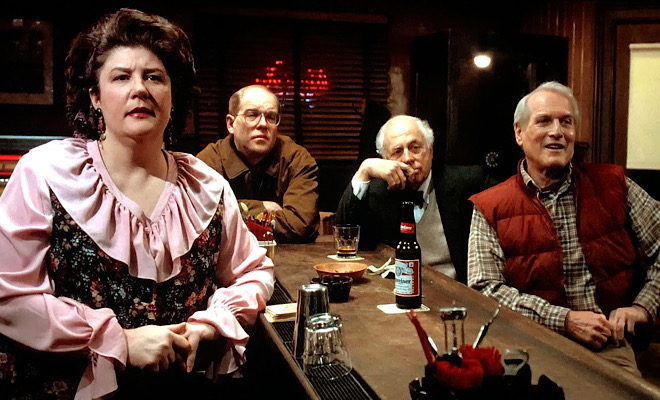 Vital Disc Stats: The Blu-ray
Nobody's Fool arrives on Blu-ray in a limited edition from [Imprint]. The disc is packaged in a standard clear case inside a sturdy slipcase. Video codec is 1080p/AVC MPEG-4 and default audio is DTS-HD Master Audio 5.1. (An LPCM 2.0 stereo track is also included.) Once the disc is inserted into the player, the static menu with music immediately pops up; no previews or promos precede it.

Paramount Pictures has been taking great care of its catalogue titles of late, and the top-notch 1080p/AVC MPEG-4 transfer of Nobody's Fool is a perfect example of the studio's superior stewardship. Vibrant, sharp, and packed with colorful accents that perk up the dreary winter canvas, this beautiful presentation instantly draws us into the intimate tale and holds our gaze from beginning to end. Faint grain preserves the film-like feel of this transfer that remains remarkably consistent throughout and faithfully honors John Bailey's naturalistic cinematography. 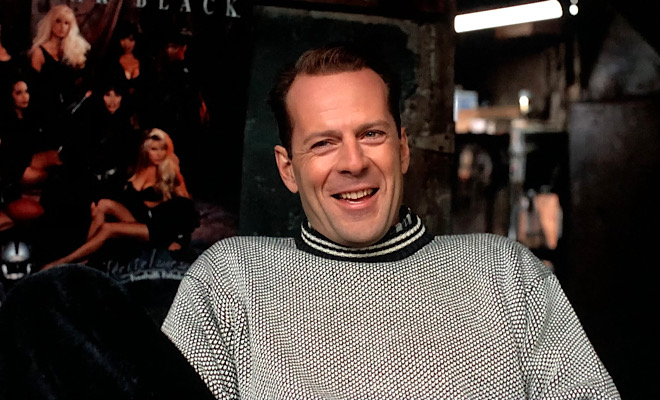 The white snow is bright and well defined, blacks are rich, and excellent shadow delineation keeps crush at bay. The bleak winter setting doesn't lend itself to much color, but the bold reds of Carl's snowblower, Toby's dress, and a big Christmas bow on a wreath grab attention, as do the pale teals and pinks of various outfits. Fine details, from the floral wallpaper patterns, wispy snow flurries, and steam from the actors' breath to costume fabrics and liquor labels, are wonderfully distinct, while crystalline close-ups highlight wrinkles, facial hair and stubble, Newman's age spots, Tandy's alabaster skin, and Griffith's creamy complexion. Only a few errant marks dot the otherwise pristine source material, and though a bit of artificial smoothing may have been applied, its judicious use largely escapes notice. I can't imagine Nobody's Fool looking any better than it does here, so if you're a fan of this touching drama an upgrade is definitely in order.

Quiet films like Nobody's Fool usually don't require a DTS-HD Master Audio 5.1 track, but this mix subtly enhances the drama. Though most of the sound is front based, the lyrical score by Howard Shore enjoys a lovely surround presence. A wide dynamic scale handles all of its highs and lows without a hint of distortion, while sonic accents like a falling tree branch, shattering glass, cinder blocks crashing onto the flatbed of a pickup truck, the rumble of a snowblower, sirens, and a single gunshot are crisply rendered. Subtleties like footsteps crunching in the snow, faint honking horns, and the din of a diner are also distinct, and all the marvelous dialogue is clear and easy to comprehend. An LPCM 2.0 stereo track is also included for those who want to replicate the original theatrical experience, but hearing the score in multi-channel surround sound is a simple yet palpable pleasure that should not be missed.

A nice array of supplements adds luster to this import disc from Imprint.

Nobody's Fool not only features one of Paul Newman's last great performances, it also stands as an intimate interpersonal drama and nuanced portrait of small-town life. Writer-director Robert Benton strikes just the right tone in this cozy, captivating film that's packed with subtle emotion, gentle humor, and terrific performances from an esteemed cast. Imprint Films honors this underrated movie with a first-rate transfer, pleasing multi-channel audio, and a substantive supplemental package, all of which make this limited edition Blu-ray worthy of a purchase. If you've never discovered Nobody's Fool, it's high time you did. Highly Recommended.