Scott (Jon Foster of Stay Alive) and Penny (Sarah Jones of Sons Of Anarchy) just moved to a remote cabin to escape the pressures of the world and breathe new life into their art. But they'll soon discover they are not alone: an infamously reclusive artist - known only as 'Mr. Jones' - lives nearby. He doesn't like to be disturbed, and only comes out at night when he drags his strange, sinister sculptures deep into the woods. When Scott and Penny's curiosity leads them too close for Mr. Jones' comfort, he plunges the young couple into a nightmare world of mayhem, madness and mind-bending terror.

At times, effective at generating several visually exciting and hair-raising moments, 'Mr. Jones' is a satisfying enough chiller that surprises with a tender and loving core at the center of its mysterious, supernatural plot. However, for a good chunk of its brisk 84-minute runtime, much of the narrative lacks the sort of heart required for audiences to feel engaged or sympathetic for the film's two leads. Because of this, the story can also feel somewhat leaden and meandering, delaying the inevitable. Scott (Jon Foster), an aspiring documentary filmmaker conveniently excusing the presence of cameras everywhere and always at the ready, asks of his viewers at the start if they ever wish their life came with a stop and rewind button. Literally counting the days until the story's objective hinted by the title comes to fruition and after our would-be hero claims to make the greatest film ever, that wish to rewind quickly becomes a tempted reality.

Making his feature-length debut after scripting another apocalyptic flick full of intriguing ideas and irony in 'The Divide,' writer and director Karl Mueller relies on the common, dilettante conventions for establishing and setting his twisted, often surreal tale. After a while, the protagonist's voiceover grows to a nuance but is apparently the only method Mueller and his team can muster for exposition. Sadly, it serves to only distract from what Scott claims to be a tense, slowly dissolving relationship with Penny (Sarah Jones), also an aspiring photographer making it conveniently comfortable surrounded by cameras. Aside from one angry argument in the middle of the night — something to do with him not taking his meds — the two appear quite loving and supportive of each other. We're told she sacrificed more in order for him to film his nature doc, but this character tension never manifests or proves to ever be an issue worth caring about.

Apparently, Mueller doesn't seem to care all that much either, losing sight of its importance altogether in favor of arriving at the movie's main attraction. Then again, the swift shift in the storyline and the narration fading to memory is welcomed since whatever first-world problems claimed at the beginning ultimately seemed superficial and stilted. When Scott's backpack containing car keys and personal information is stolen by a mysterious man in black, the couple discovers the secret location and lair to one of the world's most clandestine and reclusive artists, Mr. Jones. And this is Mueller's debut makes the strongest impression, working with a talented and creative production design team, as this Mr. Jones is a man who creates bizarre, incredibly spooky scarecrows meant to ward off evil spirits. As Scott and Penny investigate further, meaning they become bothersome busybodies, their snooping and meddling unwittingly leads to odds bumps in the night and a plethora of phantasmagoric weirdness. 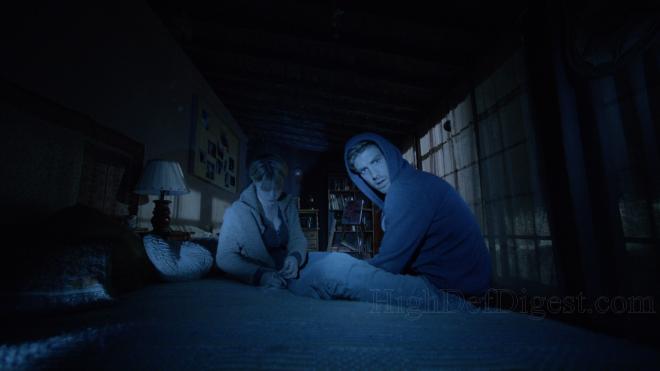 With eerie, subtly haunting music by Herwig Maurer, the requisite assortment of unnerving noises and intentional photography by Mathew Rudenberg, 'Mr. Jones' delivers, for the most part, a frightful experience, particularly as the story spirals and progresses into the origins of the artist. The conclusion — or at least what Mueller attempts as a shocking twist — is mildly surprising, albeit completely nonsensical, bonkers and ultimately confusing. It remains an unexpected turn which relates back to the couple's so-called issues, but is nonetheless pretty silly, largely because it also feels unearned and a bit hollow, almost like a quick copout from everything that preceded it. The camerawork and style is in the rapidly-growing-into-a-standard found-footage subgenre, yet it's far too polished and intentionally directed to ever be taken serious. The low-budgeted production is a strong debut, but also typical and average.

Anchor Bay Entertainment brings 'Mr. Jones' to Blu-ray on a Region A locked, BD25 disc housed inside a blue, eco-cutout case and glossy slipcover. After a couple skippable trailers, viewers are taken to the standard menu window with full-motion clips and music playing in the background.

Intended to be amateur and bungling, the horror thriller debuts on Blu-ray with a slick and competent 1080p/AVC MPEG-4 encode. Shot entirely on HD cameras, the digital-to-digital transfer is highly detailed and razor-sharp, revealing every crevice and tiny object inside Mr. Jones's underground lair. Pores and negligible blemishes are exposed while individual wrinkles and fuzz in the fabric of clothing is distinct. Contrast is general spot-on and crisp, and the cinematography of Mathew Rudenberg shows plenty of three-dimensional depth. The palette is accurate with richly-saturated primaries and natural flesh tones in the faces.

Sadly, the 1.78:1 image also displays a few minor drawbacks, most notably the sanitized digital look of the photography, giving the presentation a somewhat dull and sterile feel. Black levels tend to fluctuate often, sometimes richly rendered and true but also grayish and murky. Shadow details are deliberately limited, but the several bits of crush and some very mild banding are more problematic. Nevertheless, the high-def video arrives in excellent quality.

'Mr. Jones' makes quite the ruckus and brouhaha with this outstanding and frequently immersive Dolby TrueHD soundtrack. The design takes full advantage of the rears, delivering well-placed and discrete bumps, whispers, creaks and all other manner of creepy noises throughout the room. Although there are a couple times when the lossless mix suddenly shifts slightly to the fronts, the overall soundfield is enveloping and effective at generating a spine-chilling atmosphere. Panning is convincingly fluid with objects flawlessly moving around the listener, and the mid-range exhibits varied, crystal-clear highs without the slightest hint of distortion. The soundstage is wide and spacious, creating a satisfying wall of sound with lots of engaging activity, while an authoritative low-end supplies palpable weight and force to the many scary action scenes, occasionally plummeting to the ultra-low depths. (Here is the bass graph.) All the while, dialogue is very well-prioritized and pristine in the center, making this high-rez presentation a fun and chilling listen.

At times, effective at generating several visually exciting and hair-raising moments, 'Mr. Jones' is a satisfying enough chiller that surprises with a tender and loving core at the center of its mysterious, supernatural plot. However, for a good chunk of its brisk 84-minute runtime, much of the narrative lacks the sort of heart required for audiences to feel engaged or sympathetic for the film's two leads. The Blu-ray arrives with an excellent audio and video presentation, but offers nothing in the supplements department. The bare-bones package is a rental at best for the curious.

Sale Price 8.45
List Price 14.99
Buy Now
3rd Party 7.87
In Stock.
See what people are saying about this story or others
See Comments in Forum
Previous Next
Pre-Orders
Tomorrow's latest releases