The noir classic gets a Blu-ray makeover, and though the results aren't perfect, the newly remastered transfer struck from a 4K scan of the 35mm fine grain looks mighty nice. The addition of lossless audio and a killer commentary track sweeten this solid Blu-ray presentation of a dark, disturbing movie that's just as fascinating today as it surely was upon its initial release more than 75 years ago. Barbara Stanwyck, Van Heflin, Lizabeth Scott, and Kirk Douglas in his film debut sizzle in this scorching film noir that examines greed, desire, manipulation, and guilt in a small industrial city. Highly Recommended.

In the annals of film noir, movies like Double Indemnity, Out of the Past, The Maltese Falcon, and The Postman Always Rings Twice grab all the attention, but dozens of other high-quality noirs deluged theaters during the genre's heyday in the mid-1940s, and the deliciously nasty The Strange Love of Martha Ivers was one of them. Chock full of all the elements that make noir one of the most seductive and intriguing styles in all of cinema, this sordid tale of murder, greed, guilt, unrequited love, redemption, and despair may not possess the notoriety of the aforementioned titles, but remains a solid entry in a cluttered field, thanks to fine direction and excellent performances from a stellar cast.

Directed by Lewis Milestone, a two-time Oscar winner whose most distinguished picture is the devastating World War I drama All Quiet on the Western Front, The Strange Love of Martha Ivers begins with a riveting prologue that sets the stage for the tangled melodrama to come. One dark and stormy night in 1928, the willful, sociopathic teenage title character tries to escape the stifling confines of Iverstown and domineering clutches of her wealthy, ruthless aunt (Judith Anderson) by climbing aboard a railroad box car with wrong-side-of-the-tracks bad boy Sam Masterson. The police quash their plans and return Martha to her palatial "prison," where the young Walter O'Neil, son of Martha's tutor, tries to parlay his shameless sycophancy into a paid-for Harvard education. When Martha sees her aunt beating her beloved cat with a cane during a power outage, the horrified teen knocks the cruel woman down the stairs to her death, then concocts a plausible alibi that Walter corroborates. The only loose end is Sam, who came back to the Ivers mansion to rescue Martha and may or may not have witnessed the crime. 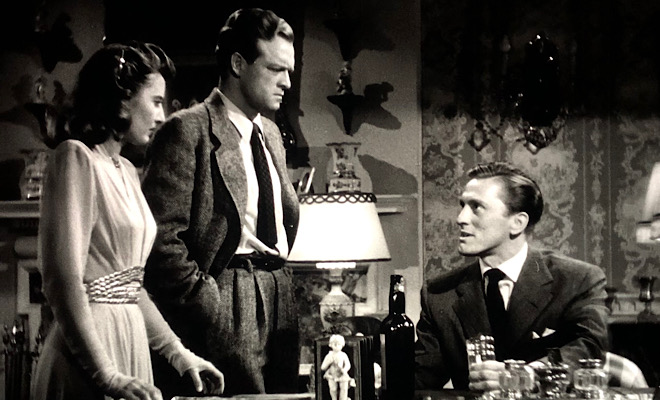 Fast forward 18 years to 1946. While driving through Iverstown by chance, the grown-up Sam (Van Heflin) crashes his car. As he awaits repairs, he meets the sultry, down-on-her-luck Toni (Lizabeth Scott), a "drifter" in trouble with the law. Sam tries to get Toni a break by looking up his old pal Walter (Kirk Douglas), who's now both the district attorney and browbeaten husband of Martha (Barbara Stanwyck), the richest and most powerful woman in Iverstown. Sam can't resist Martha's charms, and as he becomes ensnared in her web, old obsessions, jealousies, and attractions are rekindled, old wounds are reopened, and old secrets are revealed, as lust, paranoia, self-preservation, and manipulations hurl the quartet headlong toward destruction.

I first saw The Strange Love of Martha Ivers in the late 1970s as a wide-eyed teen at a New York City revival theater (anyone remember the hallowed Theatre 80 St. Marks?) on a double bill with another Stanwyck classic, Sorry, Wrong Number. A case of the flu hit me hard during the movie, but I couldn't tell whether my rising temperature was a result of the illness or the potent action on screen. Textured and nuanced, yet brash and bold, Milestone's film mixes its squalid ingredients into a strangely intoxicating brew. A sullen, cynical mood pervades the piece, and though the glamorous leads are largely dysfunctional, they're fascinating to watch and make us anxious to see how far their twisted desires and depraved desperations take them. 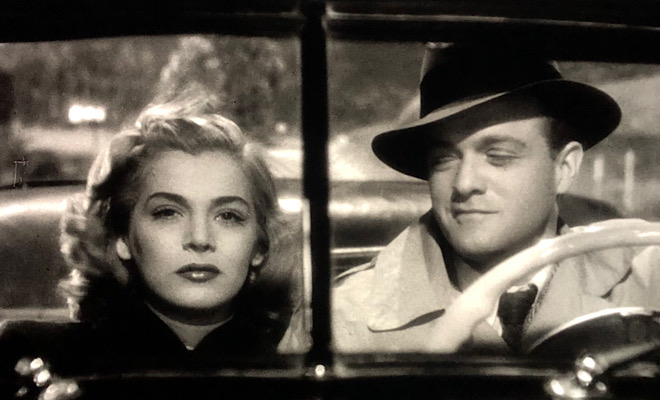 Screenwriter Robert Rossen, who went on to write and direct such acclaimed films as All the King's Men and The Hustler, paints a lively portrait of deceit and decay, as every character strives to escape their private demons, exorcise the past, and forge a brighter, romantic future. The script, however, meanders a bit, spending too much time developing the hokey relationship between Sam and Toni instead of delving deeper into the cancerous bondage that inexorably binds Martha and Walter. Stanwyck doesn't even appear until 30 minutes into the movie and that's a shame because she's a mesmerizing presence and one of filmdom's great Femme Fatales.

With her self-assured air, Stanwyck commands the screen, unafraid to explore the dark recesses of Martha's psyche. Her velvet-toned voice alternately barks at Douglas and purrs at Heflin, and her excellent work recalls her pitch-perfect portrayal of the devious Phyllis Dietrichson in Double Indemnity. Scott, at times, looks eerily like Phyllis, but with her husky contralto, pouty expressions, and deadpan deliveries more acutely resembles Lauren Bacall. Scott and especially Stanwyck create fine chemistry with Heflin, whose easygoing charm and natural pugnacity make him an attractive noir tough guy who's not afraid to brandish his sensitive side. 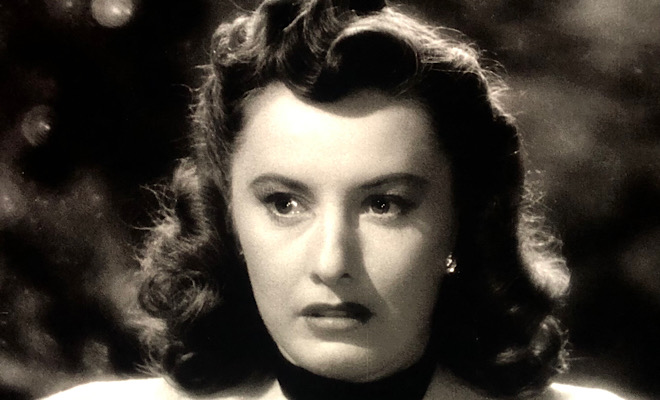 The real stunner, though, is Douglas in his film debut as Walter, a milquetoast dipsomaniac who uses liquor as a salve to ease the pain of his troubled marriage, torturous guilt, and spineless nature. For an actor who soon would personify machismo, Walter is quite a departure, but Douglas does him proud, embracing Walter's insecurities with wry humor and subtly expressing his aching, unfulfilled need for Martha's affection. It's a dazzling performance that set Douglas on the fast track to stardom.

More than 75 years after its initial release, The Strange Love of Martha Ivers remains in many ways a strange concoction, featuring one of noir's most deviant stories and shocking denouements, yet the sure hand of Milestone (surprisingly, this would be his only noir film) and finely etched portrayals of Stanwyck, Heflin, Douglas, and Scott make it accessible and, for the most part, timeless. Attractions don't get much more fatal than this one, and few noirs plumb deeper depths of darkness and devastation. Once you see The Strange Love of Martha Ivers, you won't forget it. 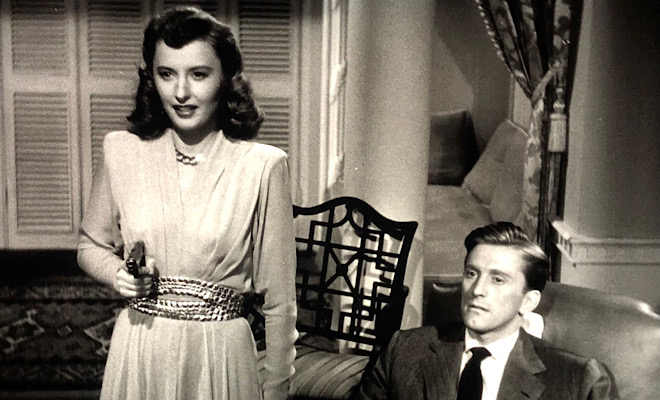 The Blu-ray: Vital Disc Stats
Kino Lorber Studio Classics' remastered edition of The Strange Love of Martha Ivers arrives on Blu-ray packaged in a standard case. Video codec is 1080p/AVC MPEG-4 and audio is DTS-HD Master Audio 2.0 mono. Once the disc is inserted into the player, the static menu with music immediately pops up; no promos or previews precede it.

The Strange Love of Martha Ivers languished in public domain hell for decades, resulting in ragged prints that  diminished the artistry and dulled the mood of this classic film noir. (Check out some of the clips on YouTube to see just how bad it once looked.) The 2012 Blu-ray from Film Chest provided a remastered transfer supposedly sourced from original 35mm elements, but the liberal application of DNR gave the principals a waxy look, while several missing frames disrupted the film's flow. Beggars can't be choosers, though, and I was so happy to at last see Martha Ivers released in the high-def format, I largely forgave the transfer's faults.

When KLSC announced this edition of Martha Ivers, touting a new transfer "remastered in HD by Paramount Pictures from a 4K scan of the 35mm fine grain," I was beyond excited and hoped I would at last be treated to a pristine presentation of this arresting film. Though the company couldn't quite deliver my dream transfer, I'm happy to report this 1080p/AVC MPEG-4 rendering outclasses the previous release, making it well worth an upgrade if you're a fan of the movie. 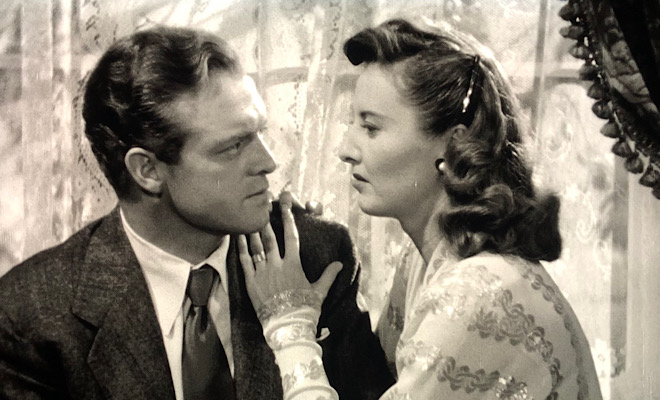 Is it perfect? No. Despite the remastering, a fair amount of print damage, mostly in the form of faint white and black vertical lines, still remains, but that's a (relatively) small price to pay for a film-like image that flaunts excellent clarity, contrast, and shadow delineation. The picture is definitely darker than the 2012 Blu-ray, but it looks more natural, thanks to an organic grain structure, rich blacks, more balanced and stable whites, and nicely varied grays that help bring fine details into focus. Falling rain, costume fabrics, and close-ups are all nicely defined, and though a bit of crush creeps in from time to time, it never overwhelms the frame. Some scenes exhibit more softness and texture than others, but the image remains surprisingly consistent throughout, especially when one considers how much this movie has been through over the course of its 76-year history.

Maybe someday we'll get the dynamite transfer The Strange Love of Martha Ivers has long deserved, but until then, this effort from Kino will stand as the best representation of this timeless film noir that brims with atmosphere and teems with conflict.

Kino has upgraded the audio track, replacing the lossy Dolby Digital 2.0 track that graced the 2012 Blu-ray release with a robust DTS-HD Master Audio 2.0 track that maximizes the dramatic and melodic power of Mikós Rósza's memorable score. A wide dynamic scale embraces all of its sweeping highs and weighty lows without a hint of distortion, while excellent fidelity helps the music fill the room. Atmospherics like falling rain and creaky stairs are wonderfully crisp and sonic accents like thunder, gunfire, and fisticuffs are distinct. All the dialogue is well prioritized and easy to comprehend, and no age-related hiss, pops, or crackle disrupt the sinister mood. This is a solid track that fully immerses us in the film's drama and remains clear and well modulated throughout.

Kino's new remaster of The Strange Love of Martha Ivers, which was struck from a 4K scan of the 35mm fine grain, isn't perfect, but it provides a lovely film-like image that eclipses every other home video edition of this deliciously nasty film noir. Barbara Stanwyck, Van Heflin, Lizabeth Scott, and Kirk Douglas in his film debut all file memorable portrayals in a movie that brims with fascinating characters and provocative, twisted themes. Robust lossless audio and a top-flight commentary track add luster to this disc that faithfully honors a noir classic. Highly Recommended.