When a serial killer starts killing beautiful young women, there are no clues. There is no motive. And there’s no end to the madness in Raw Nerve! Written and directed by genre master David Prior and starring his brother Ted Prior with Randal “Tex” Cobb, Sandahl Bergman, Traci Lords, Jan-Michael Vincent, and Glenn Ford in his final film, this late-to-the-game slasher flick may stick to conventions and early 90s psycho-sexual thrillers, but some solid performances, gnarly kill sequences, and a few good twists keep this rental favorite afloat. Restored from the only known surviving 35mm print, Raw Nerve scores a solid Blu-ray release from Culture Shock with clean audio and a fistful of interesting bonus features. Recommended

With so many crazed psycho serial killers on the loose, cops can’t seem to get a night off. For Lieutenant Bruce Ellis (Jan-Michael Vincent) and his boss Captain Gavin (Glenn Ford) the bodies are stacking up and there aren’t enough clues to go around. Night after night, beautiful women are found murdered in increasingly bloody and horrific ways. The only lead they have to crack the case is star racecar driver Jimmy Clayton (Ted Prior) - only he didn't actually witness the crimes. He's been having psychic visions of the killer and victims but no one believes him except investigative reporter Gloria Freedman (Sandahl Bergman). But when Jimmy has visions of his beautiful sister Gina (Traci Lords) brutally murdered, it may already be too late to stop the madman before he kills again!

Written and directed by genre film master David Prior, Raw Nerve is classic 90s late-night cable and video store fodder. Made when Slasher Horror was a bit passé and Sexual Serial Killer Thrillers like Sea of Love and Basic Instinct were on the rise (so to speak), this film is a clever combination of genres. On one side, you get your typical slasher, a man (or woman) hell-bent on murdering every beautiful woman who fits a certain type. Then you have the detective film angle complete with a headstrong reporter muddling up the investigation by getting too close to the potential lead suspect. Slip in some red herrings, a couple of clever misdirections, and an impressive turn from Randal “Tex” Cobb and you’ve got yourself a movie!

For a film that doesn’t really play too loose with conventions, Raw Nerve actually turns out to be an impressive production. It’s budget filmmaking at its finest letting the film keep close to the characters – no matter how thinly drawn – and then spending the bucks in the right places to keep the kills interesting and the action beats thrilling. The film also makes great use of its central cast. Sandahl Bergman and Jan-Michael Vincent may not be the names to open movies but they hold their own. David Prior’s brother Ted may have peaked with Deadly Prey but he’s on solid footing here delivering an energetic frantic performance. With that in mind, I’d never noticed before how much Christan Bale looks like him (especially American Psycho era), but it struck me this time around. Traci Lords even manages to play a convincing innocent young woman as Gina. Adding heft to the film is Glenn Ford in his final role lending some extra weight and stature to the production. 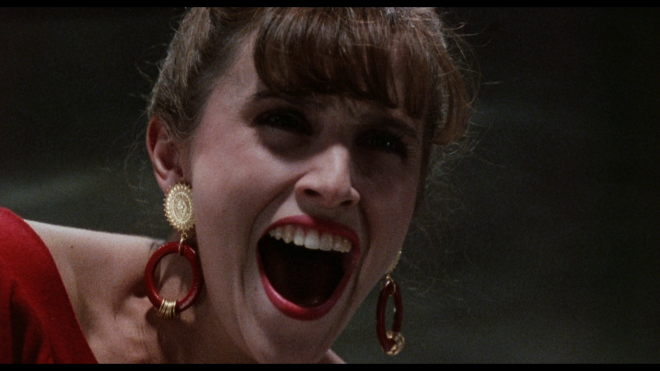 But the stand out of the film is actually former heavyweight hitter Randal “Tex” Cobb. While most folks will know him best from movies like Raising Arizona or Ace Ventura - it’s easy to forget he’s a good actor. This was one of the few movies that let him actually act and believe it or not he had some range. When you look at how often he was stereotyped as the gruff hairy goon in comedies, with this film you quickly see how underused he was during his acting career.

Sure, this film wasn’t necessarily a great one, but it was entertaining! I’d forgotten I’d seen this ages ago late at night when I was in the throws of a migraine and couldn’t sleep. Kicking back with it the other night, it seemed really familiar and then a late second act twist brought it all back. Especially the finale which may be a bit of a cliche for some, but I remember through the throbbing head pain being pretty surprised by the final twist! At the end of the day, Raw Nerve is a pretty solid little genre flick worth checking out. 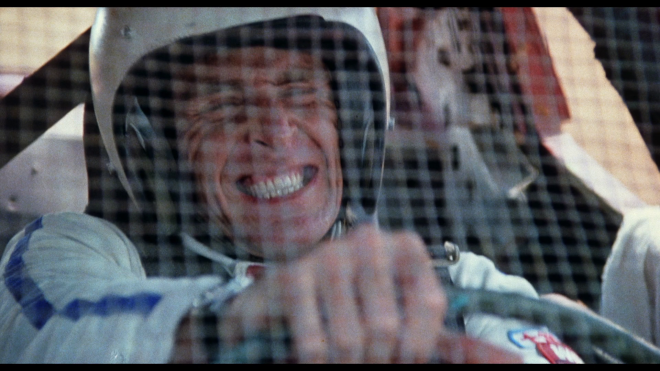 Vital Disc Stats: The Blu-ray
Raw Nerve slices and dices its way onto Blu-ray in a single-disc release from Culture Shock. Pressed on a BD-50 disc, the disc is housed in a standard clear case. If you order through Vinegar Syndrome you pick up a slick slipcover. The disc loads to an animated main menu with standard navigation options. 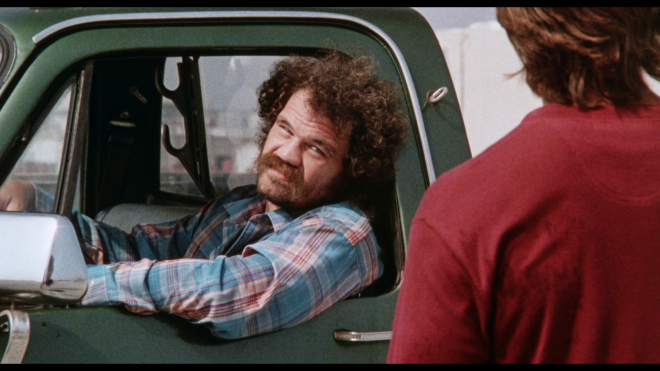 Reportedly sourced from the only known surviving 35mm print, Raw Nerve actually looks pretty good on Blu-ray. Obviously the further generation you run down the line from the original negative the less impressive things are going to turn out. There’s a bit of age-related wear and tear, colors aren’t quite as vibrant, and black levels can be a tad dodgy here and there. But you can also tell a lot of care and attention was taken to restore this film for the best possible HD presentation. There are some genuinely excellent scenes throughout. Details are relatively sharp showcasing fine textures, facial features, and makeup effects. As I said colors can lack a little of their natural luster in some places but they’re relatively solid with healthy flesh tones and a few stretches that are outright dynamite. The print damage amounts to some speckling and a little staining here and there, and film grain can be a bit thick but thankfully hasn’t been scrubbed away with the DNR ugly stick. It’d be crazy to see what this would look like scanned from a negative but this holds its own nicely. 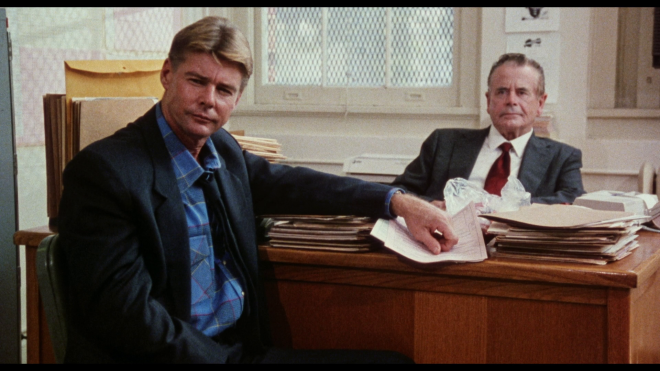 This film also comes packed with a DTS-HD MA 2.0 audio track that serves the film well enough. This isn’t likely to blow anyone’s hair back, but it gets the job done nicely. Dialog may sound a little tinny or a little raspy at times, but you’re never at odds trying to understand what anyone is saying. Music cues are strong and sound effects build an effective soundscape to work with. The track is clean without any serious hiss or pops. 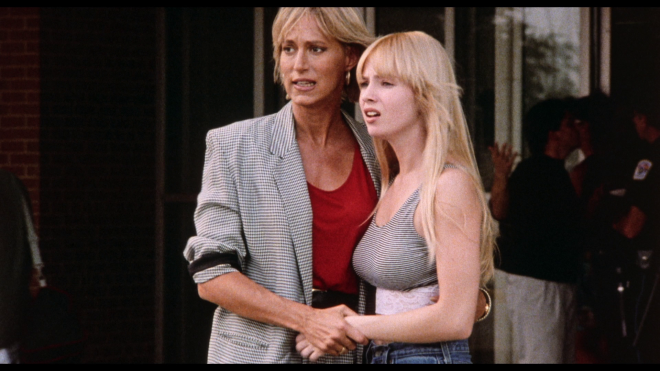 Once again Culture Shock delivers some quality bonus features for another long-forgotten old favorite. At the top of the pile is a great audio commentary with Ted Prior, Andrew Parke, and editor Tony Malanowski - without whom we wouldn’t have this film in the sape that its in. After that we have new interviews with producer Ruta Aras and Ted Prior with a funny little blooper reel to close things out. 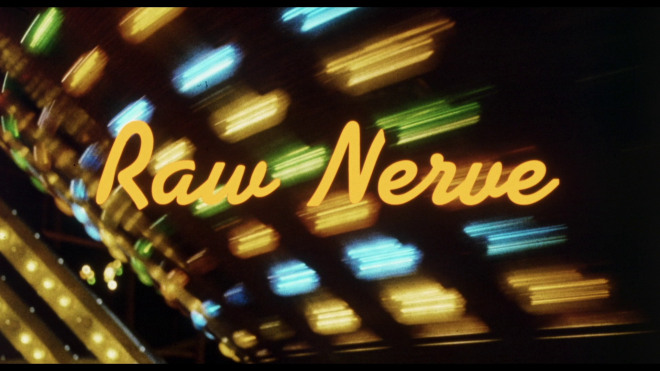 Raw Nerve was a fun one to reconnect with. Like so many films of this type, I’d forgotten about it and it wasn’t until about halfway through this very entertaining flick that I started to remember it. It may not be the best of the pack but it holds its own thanks to a great cast and some clever twists. The late great David Prior certainly had an expansive career contributing a swath of cult classics in his time and it’s nice to see one of his better efforts survive for a solid Blu-ray release. Given the source elements, this is actually a pretty good-looking disc with clean audio and some excellent bonus features to pick through. If you’re a fan of brothers David and Ted Prior’s collaborations, check this one out - it’s also the only place you’ll see Glenn Ford’s final film role! Recommended