Legendary cinematographer Michael Ballhaus brings his trademark glowing, breathless camera work to Bobby Roth’s melancholic buddy movie Heartbreakers. Out of print on home video since the VHS era, the film arrives on Blu-ray with a terrific 2K restoration sourced from the 35mm interpositive. A handful of deleted scenes and newly produced features round out this release from Fun City Editions. Recommended!

Filmmaker Bobby Roth has been working consistently in the film and TV industry since the mid-1970s, with his most-recent output being relegated to popular TV programs like MacGyver and The Last Ship. But in 1984, he upended the then-popular buddy drama/comedy subgenre with Heartbreakers, a warm mid-budget drama that boasts great work from three disparate parties – actor Peter Coyote, musicians Tangerine Dream, and cinematographer Michael Ballhaus. Although the film was entered in the 35th Berlin International Film Festival and was warmly received by audiences and critics alike in the US upon release through a distribution partnership with Orion Pictures, it has weirdly disappeared from the conversation when discussing vibrant LA-set ‘80s films.

Heartbreakers gave Roth the perfect chance to show off just how assured his direction and writing could be with the right collaborators. In the years prior, Roth had struggled to find a project that didn’t present a set of obstacles that forced him to make too many compromises. But with this 1984 buddy drama, the bawdy sex antics that usually ran rampant through similar films of this era take a backseat to something more elemental. That’s not to say Heartbreakers is without titillation, but it’s rather careful in studying the before - and after - effects of such titillation as it charts a story of two 30-somethings whose relationship is at odds with their own respective personal dissatisfactions. 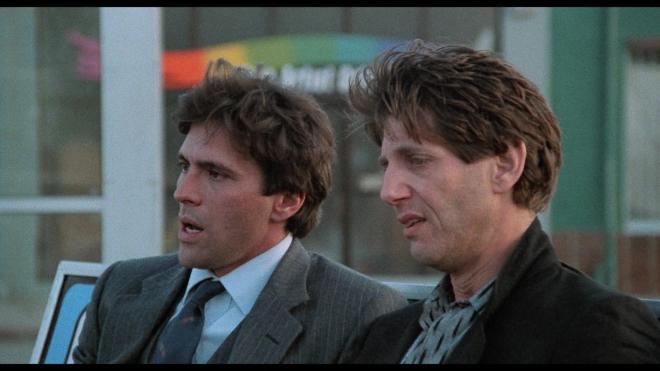 In a lesser film, both the disaffected artist Blue (Peter Coyote) and loveless businessman Eli (Nick Mancuso) would be getting up to the same antics that ran through most of the ‘80s sex comedies released. But in Roth’s world, the duo’s journey is about spiritual liberation in the purest sense. While the situations are certainly similar, like a climactic ménage à trois and the not-infrequent leering from the main characters, all of these moments feel informed by a dedication to a thorough emotional arc. It just so happens that the arc is being played out by a bunch of collaborators all at the top of their games.

I’d be remiss not to mention Michael Ballhaus’ cinematography, which gifts the film with the kind of assuredness needed to pull off such a tricky story. The film is filled with listening and responding, and so Roth’s direction follows suit; showcasing the inner turmoil between Blu and Eli with great sensitivity. Tangerine Dream’s score is another highlight, with those signature bassy synths and upbeat melodies adding another layer to the proceedings.

If you’re a fan of ‘80s coming-of-age dramas or comedies, then Heartbreakers is more than worth your attention. It separates itself from the pack with terrific performances, lived-in dialogue and a confessional quality that opens a dialogue between the viewer and the bawdy sex comedies the film improves upon.

Vital Disc Stats: The Blu-ray
Ripe for rediscovery, Heartbreakers arrives in a single-disc Blu-ray release from Fun City Editions. The BD-50 disc included is housed within a clear case with an essay booklet and reversible sleeve art. The case comes with a limited-edition slipcover (available only at VinegarSyndrome.com) with spot gloss, embossing, and art by Pip Carter. The disc loads to an animated menu where you can choose between the main feature, special features, subtitles, and chapters options.

Heartbreakers arrives on home video for the first time since VHS with a brand-new 2K restoration sourced from the 35mm interpositive. Overall, the 1080p presentation looks terrific, with those vibrant colors inherent to the 80s popping nicely but not too strongly. Much of the film takes place in interiors, including art galleries and various restaurants, but clarity is top-notch throughout with only some minor softness infrequently popping up. Grain is a bit heavy, but it’s resolved quite nicely from scene to scene. Whites are stable throughout as well and the source seems to be in great condition with not much damage creeping its way into the presentation.

The 2.0 DTS-HD MA track preserves all the dialogue wonderfully, with effects never overtaking the dialogue exchanges. Tangerine Dream’s score is treated similarly, coming through clear and never taking away from the focus of the story. Since the film comes from the 1980s, there’s a great abundance of different electronic melodies and beats, but the track handles them all with balance. There’s only a bit of damage that presents itself, particularly in a love scene about an hour in. The slight tininess to the dialogue is apparently inherent in the source. Overall, the film sounds great.

Fun City Editions has really packed this new Blu-ray release of Heartbreakers with special features. Aside from the various easter eggs on the menu, there’s a terrific career-spanning interview with Bobby Roth that goes into great detail about why and how the film became so personal to him, including stories about how he recreated LA locations from his memory that he frequented. In addition, the interviews with actors Peter Coyote and Nick Mancuso provide a bit of detail as to how they incorporated their own personal selves into the roles of Blue and Eli. This is a great slate of extras by FCE, and I appreciate the inclusion of deleted scenes.

There are a few fun easter eggs contained in the animated menu as well and they are as follows:

Heartbreakers is proof that there’s still great work to be found in ‘80s LA-set cinema, plus it offers terrific work by craftsmen who would go on to make some of the most popular films of the era. Coyote’s wry Blue and Nick Mancuso’s emotionally-stunted Eli make for a great duo, but Bobby Roth’s script really imbues their characterizations with dramatic heft. And with a terrific presentation from FCE as well as some great special features, this is a release worth picking up. Recommended!