Starring legendary martial arts stars Yuen Biao and Cynthia Rothrock, Corey Yuen's Righting Wrongs is an action-packed and terrifically engaging Hong Kong action flick deserving to be remembered as one of the best 80s martial arts films and is perhaps better known as the heavily-edited English dub that was retitled Above the Law. Courtesy of Vinegar Syndrome, the cult action classic rights the wrongs on Blu-ray as a three-disc edition of all three versions of the film, each of which features an outstanding HD video and strong DTS-HD MA mono tracks with newly translated English subtitles. With a treasure trove of new bonuses and a booklet, the special limited edition BD package is a Highly Recommended addition to the cult library.

Arguably, one of the more memorable things about Corey Yuen's Righting Wrongs is the three tonally different versions of the same story. Most infamous is the version for the Chinese market that adds four more minutes to the runtime and features an alternate ending, which will not be spoiled here. And this one plays more like serious police procedural that ironically provides better exposition and context to some of the character interactions, most notably one lawyer's very chummy friendship with a judge, a cop disrupting a mahjong gambling den and another cop's close relationship with his father. Another English-dubbed version for the international market, which was retitled Above the Law and perhaps the best-known cut, was also heavily edited down to 92 minutes with that same alternate ending but toned down the story's comedic aspects with Yuen's goofy, always-eating inspector and Wu Ma's coddling father.

Not surprisingly, the best version remains Yeun's original 96-minute cut, which better balances the comedy and action with its police procedural plot and an ending that is frankly more fitting to the overall tone. And that is probably the movie's other memorable aspect, a story that feels as though loosely inspired by Marvel's Daredevil comics. Not literally, of course, but it kinda feels that way since this story, too, features a very dedicated lawyer (Yuen Biao) with unwavering faith in the law and justice. But when the judicial system fails to exact that justice, Biao's Ha rights the wrongs by hunting the criminals at night dressed in an all-black outfit. Granted, the similarities end there, but it nonetheless makes for an interesting aside. More to the point is Ha's desire to locate the mysterious ringleader of a major drug trafficking ring, known only by the codename "Crown." To his surprise, his investigation uncovers massive corruption in the police department. 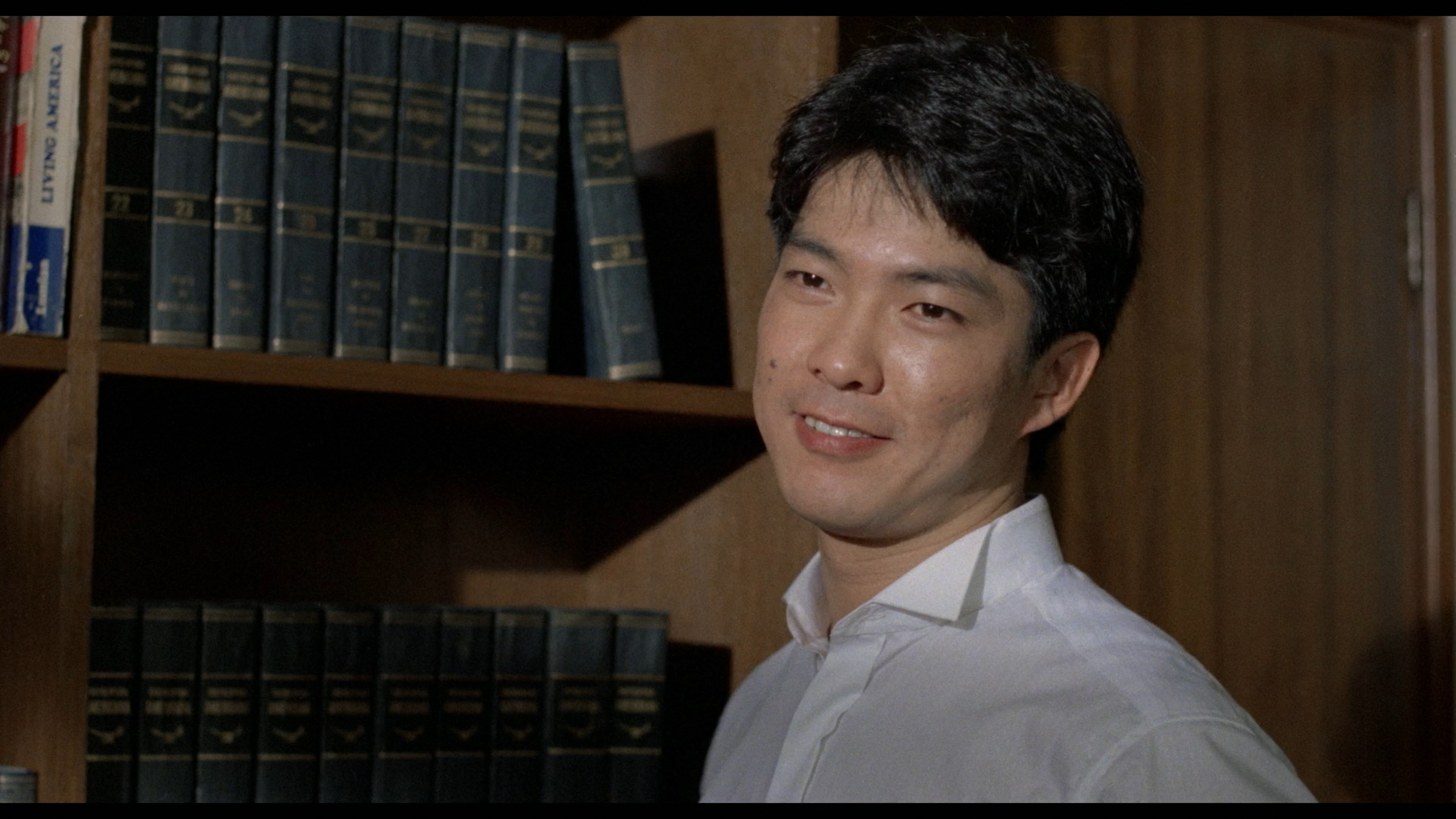 At the same time, Cynthia Rothrock's tough, hard-nosed detective Cindy is on the case to find this would-be vigilante and discovers Biao's prosecutor at a murder scene, leading to him becoming her prime suspect. And this is the best part of the movie. This "case of mistaken identity" plot is intermingled with other ideas about vigilante justice and police corruption, which sounds unnecessarily complicated in what is supposed to be a straightforward martial arts action flick. But director Corey Yuen somehow manages to make it all work and be entertainingly engaging, having it all eventually come together in a spectacularly over-the-top climax. And he even throws in some buddy-cop comedy into the mix when Superintendent Wong (Melvin Wong) forces Cindy to partner with a messy, buffoonish cop who is always shoving food into his face, played by Yuen himself. And this, too, serves as an important role that moves the plot rather than hindering it.

Righting Wrongs is one of the great Hong Kong action flicks from the 1980s, but Yuen's film has largely been forgotten over the decades, eventually becoming an obscure cult martial arts classic. It's a shame really, especially seeing as how Yuen, Biao and Rothrock are legendary actors of the genre but never earned the same level of recognition and admiration as Jackie Chan, Bruce Lee or Jet Li. It's particularly awesome to watch Rothrock showcasing her amazing fighting style, going toe-to-toe with Biao in one fantastic scene involving handcuffs or going up against Karen Sheperd in another magnificent fight sequence, which is my personal favorite. In fact, the whole movie is littered with sensational action choreography involving cars, airplanes, stairs, various garage tools and equipment, and one with a projection TV featuring Peter Cunningham against Biao. Simply put, the movie is loads of fun and deserves a great deal of love from action and martial arts fans.

Vital Disc Stats: The Blu-ray
Courtesy of Vinegar Syndrome, Righting Wrongs finds justice on Blu-ray as a special limited edition three-disc package with a hard, sturdy side-sliding box. A pair of Region Free, dual-layered BD50 discs sit comfortably on opposite sides of a center spindle while the final panel holds a third single-layer BD25 disc containing an excellent documentary about martial arts films. The first disc houses the original 96-minute cut of the film while the second disc contains both the 100-minute Chinese Cut and the 92-minute international English dub that was retitled Above the Law. All three discs come inside a clear, eco-elite keepcase with reversible cover art, a cardboard slipcover and a 40-page book with color photos and three thoughtful essays. At startup, the disc goes straight to a menu screen with the usual options along the bottom, full-motion clips and music playing in the background. 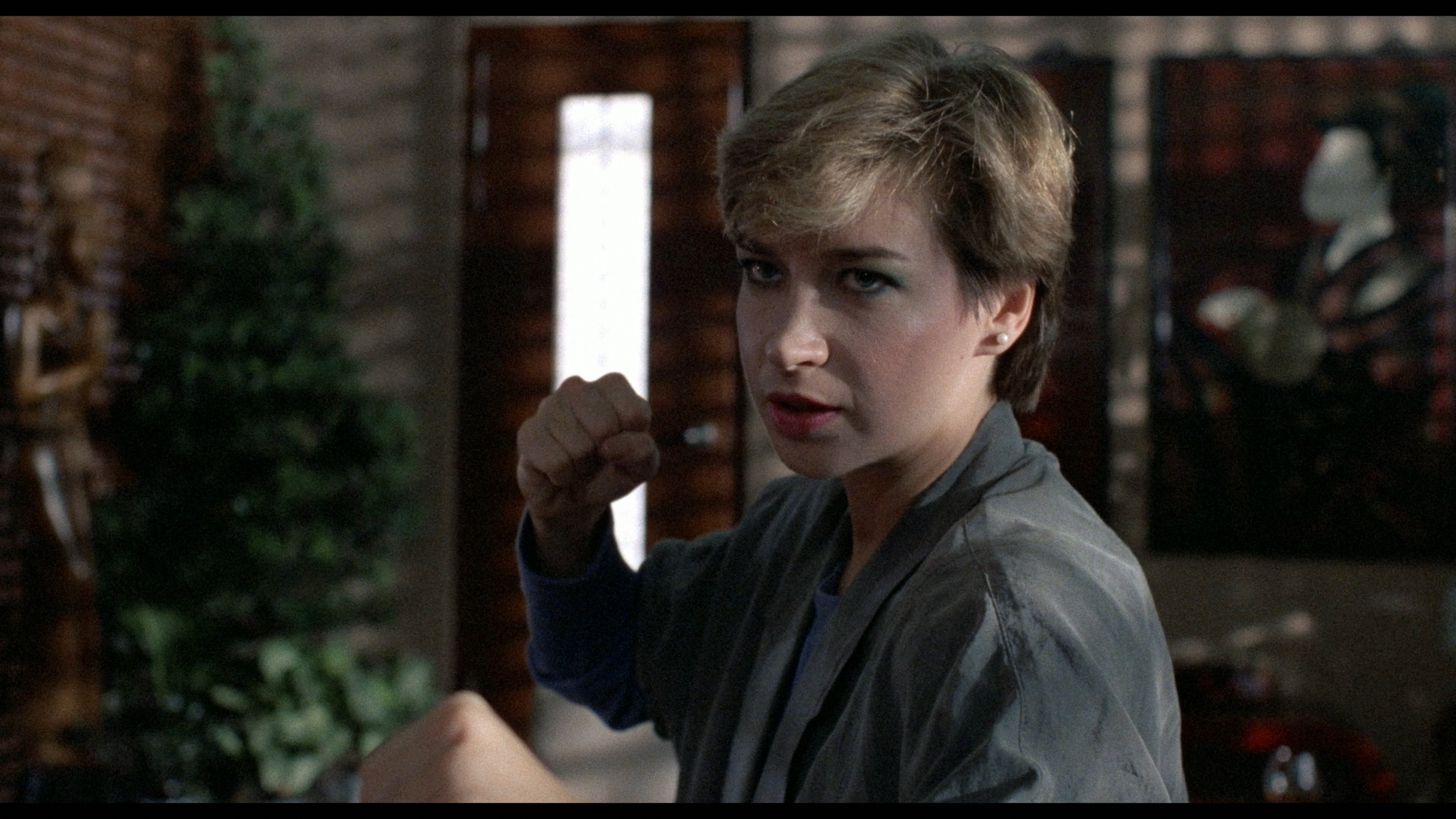 The cult martial arts actioner rights the wrongs and exacts justice on Blu-ray for all three cuts of the film, equipping each with an outstanding 1080p/AVC MPEG-4 encode that was struck from a fresh restoration and color grading of the original elements. The HD transfers of all three versions explode with surprisingly sharp details for most of the runtime, from the surrounding foliage and the stitching in the clothing to the small architectural features of the buildings and the various objects decorating each room. As should be expected, a few softer and poorly resolved moments are sprinkled here and there with a slightly more prominent, heavier grain structure. But considering the film's production history, the source appears to be in excellent condition with a mostly thin, finer layer of grain throughout, providing the 1.85:1 image with an attractive film-like appeal. Contrast and brightness balance are spot-on with crisp, brilliant highlights and rich, true blacks, and shadow details are strong. Most impressive is the full-bodied, richly-vibrant color palette, bringing that classic 80s neon-inspired aesthetic to life while showering the action in opulent, flamboyant primaries. (Video Rating: 88/100) 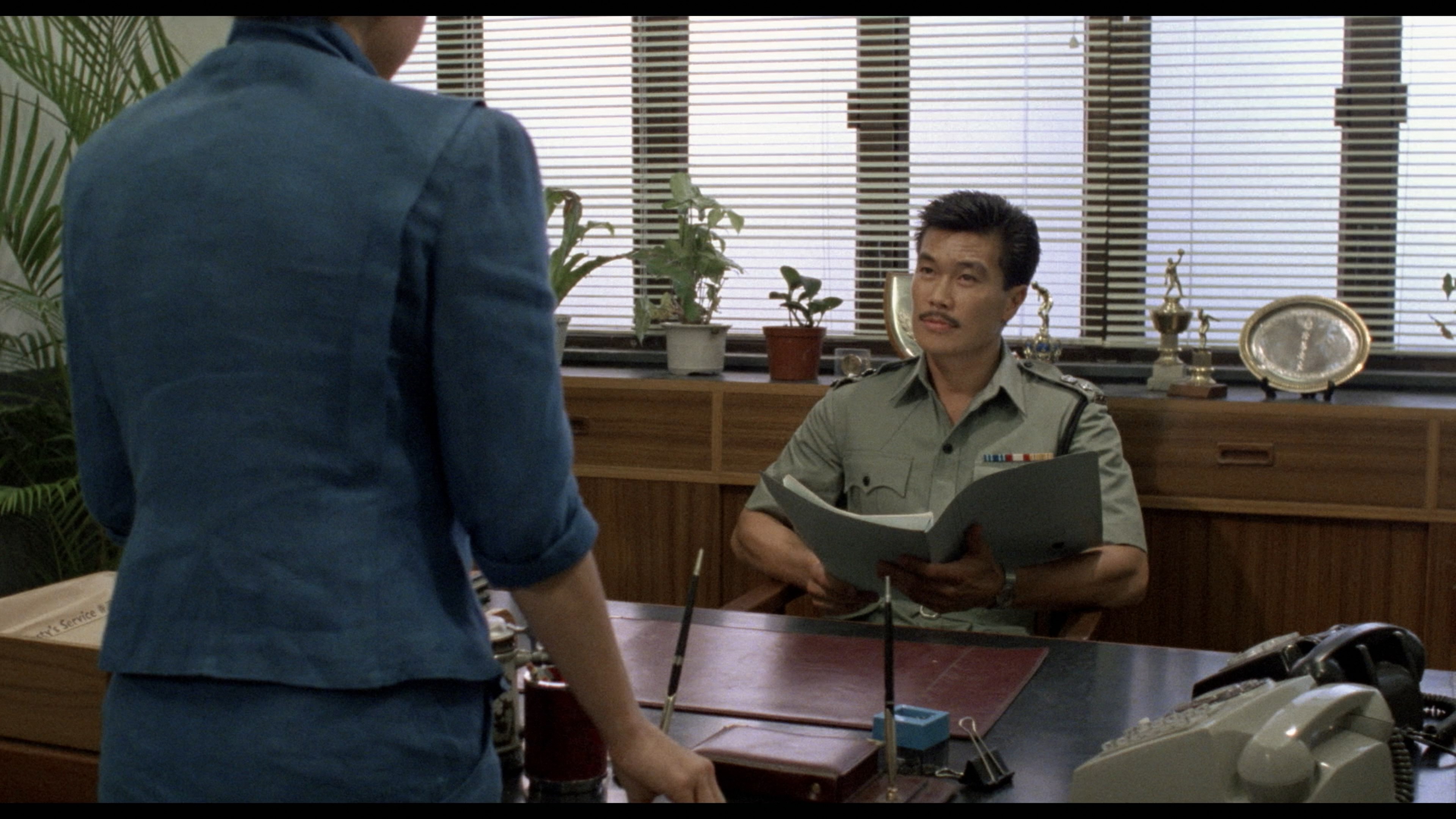 Complementing the excellent video presentation are three DTS-HD Master Audio mono soundtracks, offering fans three ways to enjoy each different cut of the film. The first disc is the Hong Kong cut featuring the original Cantonese, English & Mandarin languages with newly translated English subtitles and is also joined by an English dub and a Mandarin dub. Then, the second disc houses the vastly different Chinese Cut in Mandarin with newly translated English subtitles and the international English-dub cut known as Above the Law.

Unfortunately, in all three cases, the audio tracks are nothing standout or particularly noteworthy although they are strong and competent with a generally good mid-range. It never pushes far into the higher frequencies with the loudest segments feeling as though they taper off at a certain point and suddenly flatten, creating a rather narrow and uniform soundstage lacking some depth and presence. Nevertheless, there isn't a hint of noise or distortion either, maintaining decent clarity and definition throughout, but still, they are neither terrible nor memorable. Aside from the very obvious ADR work, dialogue comes through cleanly and well-prioritized, and the low end is surprisingly hearty with appreciable weight in the action sequences. All things considered, all three lossless mixes get the job done and are otherwise enjoyable listen. (Audio Rating: 70/100) 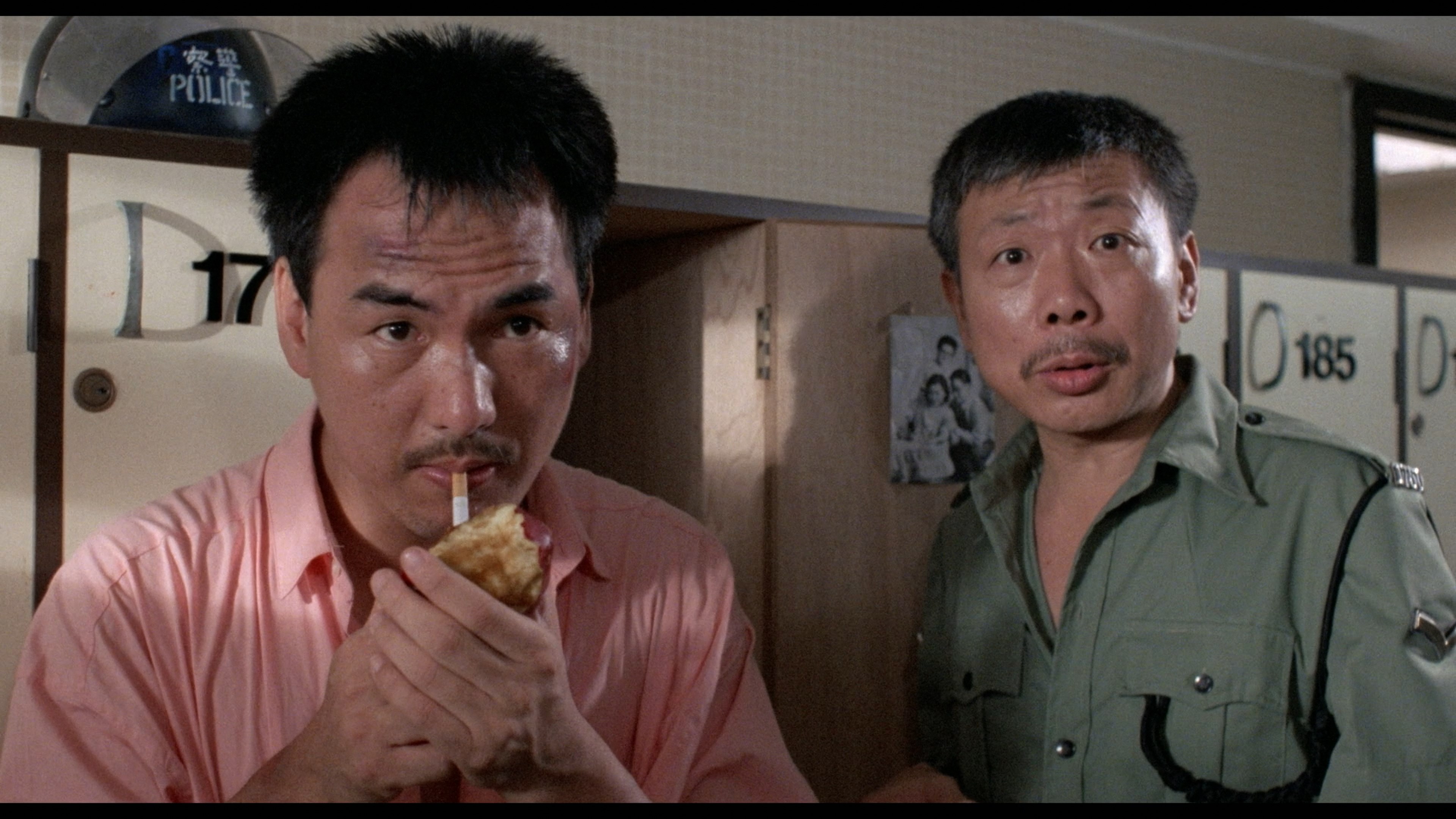 For this limited edition Blu-ray package of Righting Wrongs, Vinegar Syndrome packs an impressive selection of exclusive bonus features and a third BD containing a documentary. 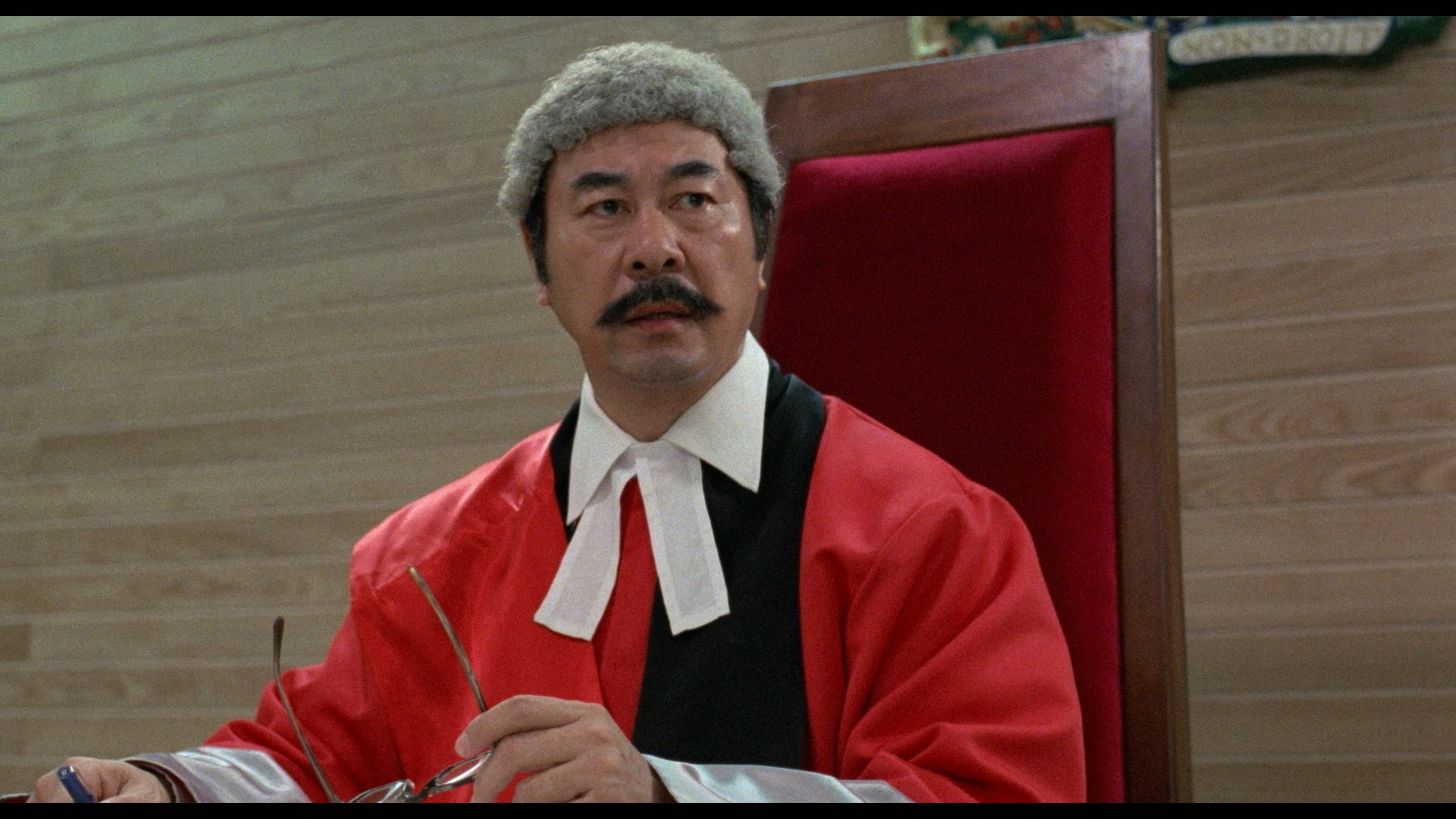 Starring legendary martial arts stars Yuen Biao and Cynthia Rothrock, Corey Yuen's Righting Wrongs is an action-packed and terrifically engaging Hong Kong action flick that sadly, is mostly forgotten today. However, the cult action classic deserves better recognition and really should be remembered as one of the best 80s martial arts films. The film is infamously known for having three tonally different versions with an alternate ending, one of which is the heavily-edited English dub that was retitled Above the Law. Courtesy of Vinegar Syndrome, the cult action classic rights the wrongs on Blu-ray as a three-disc edition of all three versions of the film, each of which features an outstanding HD video presentation and a great selection of DTS-HD Master Audio mono soundtracks with newly translated English subtitles. With a treasure trove of new bonuses and a booklet housed inside a sturdy side-sliding box, the special limited edition BD package is a highly recommended addition to the cult library.