Two former baseball players, Ben (Jeremy Gardner) and Mickey (Adam Cronheim), cut an aimless path across a desolate New England. They stick to the back roads and forests to steer clear of the shambling corpses that patrol the once bustling cities and towns. In order to survive, they must overcome the stark differences in each other's personalities. Ben embraces an increasingly feral, lawless, and nomadic lifestyle while Mickey is unable to accept the harsh realities of the new world and longs for the creature comforts he once took for granted. A bed, a girl, and a safe place to live. When the men intercept a radio transmission from a seemingly thriving, protected community, Mickey will stop at nothing to find it, even though it is made perfectly clear that he is not welcome.

Amid a heavily-congested ocean of zombies — their sudden rise to popularity as both a plot formula and cultural phenomenon is in itself worthy of serious critical attention — it's nice to know that small independent features like The Ford Brothers' 'The Dead' and Jeremy Gardner's 'The Battery' are out there for loyal, devoted fans of the subgenre. They serve to remind moviegoers, those taking the moment to give these films a chance, that there remains plenty of potential and possibilities with these poor misunderstood rotting corpses. As film tropes, they've always possessed an intriguing opportunity for examining social order, the arbitrariness of cultural institutions and norms, and the deterioration of hierarchies. They also reveal our instinctual fears of deadly viruses and their rapid spread, but even in those scenarios, the breakdown of subjective social order remains a core central theme.

What makes Gardner's directorial debut, which he also wrote and produced, impressive and one of the best walking dead flicks in a long while is that he turned those societal concerns into personal dilemmas that problematize the survival of two friends. Not only is this true as an expected literal narrative device but also metaphorically for two guys that have a very particular relationship. Lingering emotional attachments to the past, the nostalgic desire to restore what once was, especially when confronted by former lovers and family members, complicate one character's ability to cope with the reality of his situation. His partner during the zombie apocalypse, on the other hand, seems to have accepted his fate, which unfortunately has only made him colder and more distant with a nihilistic outlook. The battle is not only for survival but also an internal one for preserving a sense of humanity and civilization. 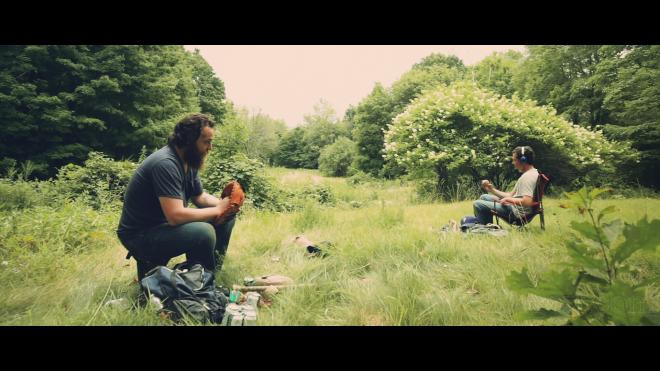 Granted, similar issues have been touched on in other features, most notably 'The Walking Dead,' where this theme seems to be a common thread in each episode. How does one restore order and a sense of normalcy when the rest of the world has resigned to apathy and an existence in anarchy? To some extent, Gardner's Ben has accepted this fatalistic view, a scavenger that wants to keep moving because standing still invites death. As one would expect, his reasoning is valid: why play by the rules when there aren't any. His friend, Mickey (a frankly stiff and pedestrian Adam Cronheim), however, covets for the past to such a degree that his decisions and yearnings make it nearly impossible for him to kill what is already dead. One surprisingly touching moment sees Mickey in his former girlfriend's bedroom where he steals a bottle of perfume and the likely-dead girl's underwear. Gross and pathetic as it is, there's also something tragically sweet and tender about the scene which reveals the character's personality trait as a serious hindrance later on.

At first, especially given posters, home media cover art and previews, 'The Battery' will have audiences thinking the story has something to do with being trapped inside a defective vehicle. Of course, stuck inside a car while a mob of the walking dead surround the two friends does play an important role in the third act; their friendship, along with their sanity, is severely tested. However, Gardner intends the title to be more than a reference to the closing half hour. It's an allusion to the unique relationship in baseball between the pitcher, Mickey, and the catcher, Ben. This adds a deeper layer to the guys, their closeness and their unspoken need for each other in order survive. It also helps in understanding Ben pushing Mickey hard as he does, his wanting his teammate to toughen up and play like a champ, or in this case, endure like Ben knows Mickey is capable of. It makes for one of the more original and exciting zombie flicks in years.

Shout! Factory brings 'The Battery (2012)' to Blu-ray under the distributor's Scream Factory line. The Region A locked, BD50 disc is housed inside the normal blue case with reversible cover art. At startup, the disc goes to a generic menu with full-motion clips and music playing in the background.

The horror drama debuts on Blu-ray with an outstanding, highly-stylized 1080p/AVC MPEG-4 encode that appears faithful to the artistic intentions of the filmmakers. Shot on inexpensive HD cameras in the bokeh style of photography, the cinematography displays a deliberately steely, antiquated and slightly flat color palette that generates a cold, bleak atmosphere. Nevertheless, primaries remain true and boldly saturated with healthy, well-defined facial complexions. The digital-to-digital transfer also shows a purposefully limited contrast, but whites are crisp and brilliant throughout. Black levels are rich and true with strong shadow delineation, providing the 2.35:1 image with good dimensionality.

Like the video, the DTS-HD Master Audio soundtrack is impressive, especially for a small limited budget production. Being a front-heavy mix, imaging is very broad and expansive with excellent balance and separation between channels, delivering convincing off-screen effects with great fidelity and directionality. Mid-range is surprisingly rich and extensive, exhibiting detailed clarity in the action, music and various song selections. Low bass is often quite potent and responsive, providing depth and weight to several sequences, while vocals are pristine and well-prioritized. Rear activity generates a very satisfying and often immersive soundfield, as the listener is surrounded by the sounds of nature blending with the hungry moans of zombies.

One of the more thoughtful and intelligent zombie flicks of recent memory, 'The Battery' is an impressive and well-paced debut from Jeremy Gardner. Through its simplicity, the film explores the challenges of surviving a zombie apocalypse, not just in the literal sense but also psychologically, as represented by the unique friendship of two male protagonists. The Blu-ray features an excellent audio and video presentation with a healthy collection of supplements, a package horror-hounds can sink their teeth in.

Sale Price 8.94
List Price 19.97
Buy Now
3rd Party 8.94
In Stock.
See what people are saying about this story or others
See Comments in Forum
Previous Next
Pre-Orders
Tomorrow's latest releases