So Proudly We Hail

One of the best movies to chronicle the contributions of women in World War II, So Proudly We Hail seamlessly mixes action, propaganda, and romance as it depicts the senseless carnage and sacrifice of war. Director Mark Sandrich's film earned four Oscar nominations and features stellar performances from Claudette Colbert, Paulette Goddard, Veronica Lake, and a veritable army of fine supporting players. A brand new 2K master, robust lossless audio, and a solid commentary track distinguish Kino's Blu-ray presentation of this long-neglected film that deserves to be rediscovered and appreciated. Recommended.

Paramount Pictures hyped So Proudly We Hail as the "first great love story of our girls at the fighting front!" Not only does that trite description severely misrepresent director Mark Sandrich's film, but it also minimizes and trivializes the enormous contributions legions of women made in the battle zones of World War II. Yes, there's some romance in So Proudly We Hail, but the bulk of this tough, largely realistic movie focuses on the duties of Army nurses, the challenges they confront, the hardships they endure, and the courage they must brandish in the face of a brutal and dogged enemy.

Oh, and another thing. These aren't "girls." They're brave, patriotic women who sign up to do a job, not find a husband. Better still, they're heroines who revere freedom and humanity and volunteer to risk their lives for the greater good. While So Proudly We Hail can't resist glamorizing its stars, who look remarkably well-coiffed and made up even while weathering enemy fire, the film tries its best to accurately depict the violence, chaos, stress, and squalid conditions of war. 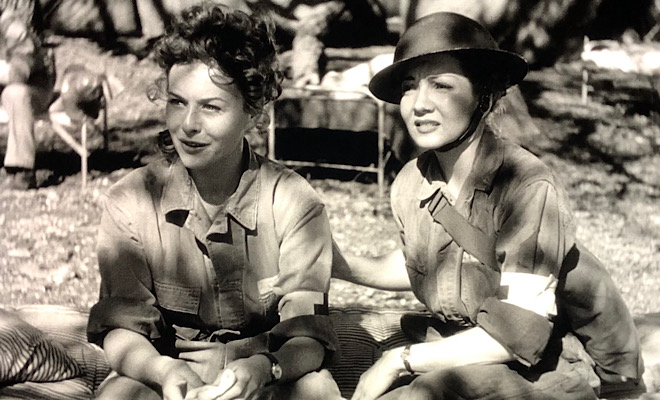 The movie opens with a haggard and traumatized corps of Army nurses landing in Australia after their harried evacuation from the Philippine islands of Bataan and Corregidor. One of the head nurses, Lt. Janet "Davey" Davidson (Claudette Colbert), arrives in a comatose state, and in an effort to revive her, a doctor asks her colleagues to recount their experiences leading up to Davey's collapse and possibly pinpoint the episode that triggered it. And so begins a two-hour flashback that chronicles the nurses' journey to the Pacific theater and harrowing ordeals under perpetual fire from a fierce Japanese foe.

So Proudly We Hail works best when it sticks to the events of the war and depicts how the nurses react and adapt to the struggles they face. Though the characters aren’t exactly naive at the beginning of the film, their sunny dispositions, and caring attitudes can’t prepare them for the violence, suffering, destruction, and death they will soon witness in the battle zone. When it’s not focusing on the romances between the nurses and strapping GIs or tossing in a gratuitous catfight between Paulette Goddard and Veronica Lake, the screenplay by Allan Scott shows how the women mature under fire, form strong bonds, and prove to be an asset against the enemy. Still, as often is the case with World War II films produced during Hollywood’s Golden Age, there’s a tad too much interpersonal drama getting in the way of the more serious issues at hand. 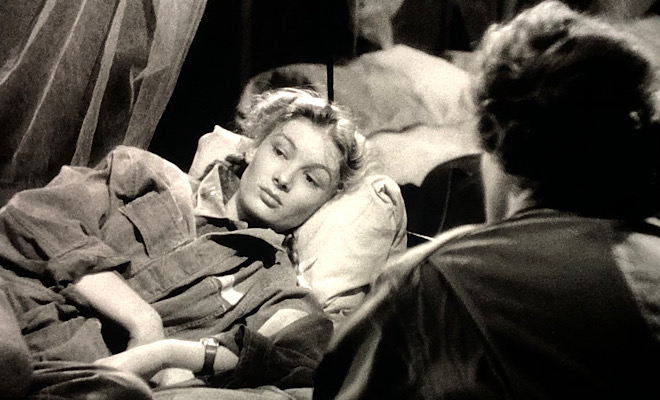 So Proudly We Hail seems like an odd project for Sandrich, who cut his directorial teeth in the musical realm. He helmed five Fred Astaire-Ginger Rogers movies as well as the Astaire-Bing Crosby Christmas classic Holiday Inn, which he completed just before So Proudly We Hail went into production. His light touch serves the rather lame comedy bits well and his sensitivity keeps the saccharine quotient at an acceptable level during the love scenes.

Surprisingly, Sandrich’s best work comes in the combat sequences, which are about as realistic as anything Hollywood produced during the 1940s. Massive in scale and aided by seamless, Oscar-nominated special effects that often make us forget the actors are performing on a studio backlot, the war scenes crackle with intensity and contain a few graphic moments of gore. Sandrich proved his versatility with So Proudly We Hail, but sadly would not live much longer to craft more films in the same vein. He died just two years later of a sudden heart attack at the tender age of 44.

Colbert tackles her role with her usual professionalism, combining sensitivity with strength. Though her romance with future TV Superman George Reeves struggles to generate heat (he's 10 years her junior and looks it), she makes it believable enough. More credible is the coupling of Goddard and Sonny Tufts in his film debut. Both infuse energy into the film's non-combat scenes, but Goddard's performance is especially impressive, spanning a wide range of emotions and earning her an Oscar nod for Best Supporting Actress, the only nomination she would receive during her career. 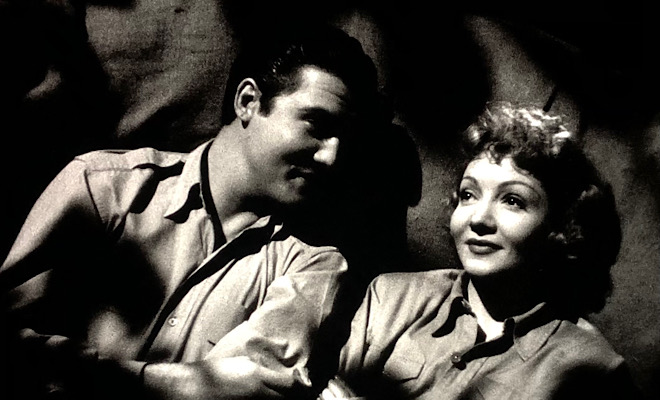 The entire ensemble shines (Golden Age junkies will certainly spot the always solid Dorothy Patterson and Ann Doran), but the standout portrayal comes from the 20-year-old Lake as an embittered war widow who joins the nursing ranks to fulfill a personal vendetta against the enemy that killed her fiancé during the attack on Pearl Harbor. Her character evolves the most and provides Lake, who heretofore was known more for her pouty, sultry glamor and trend-setting peek-a-boo hairstyle than her acting talent, with a meaty and memorable role that she plays with both intensity and grace.

As a recruiting tool, So Proudly We Hail probably worked quite well, inspiring support for the war effort and admiration for the women who served and sacrificed for their country without sugarcoating (too much) their harrowing experiences. It succeeds as entertainment as well, combining thrills with emotion and bringing a feminine perspective to what was up until then a very masculine war, at least on film. Despite its Hollywood conventions and smattering of clichés, So Proudly We Hail feels authentic and brings us close to a war that was fought very far away by forces of both genders, whose bravery and heroism still moves us today. 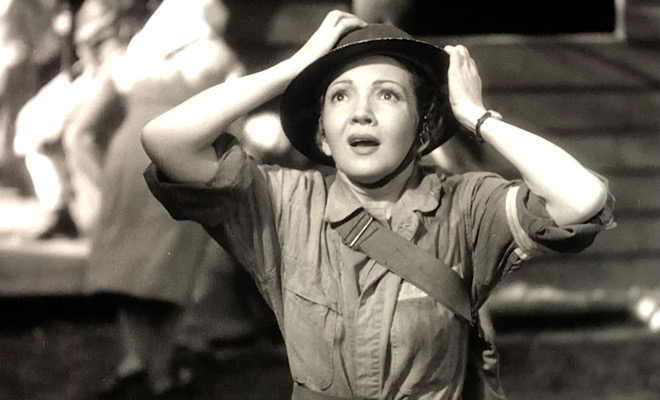 Vital Disc Stats: The Blu-ray
So Proudly We Hail arrives on Blu-ray packaged in a standard case. Video codec is 1080p/AVC MPEG-4 and audio is DTS-HD Master Audio 2.0 mono. Once the disc is inserted into the player, the static menu with music immediately pops up; no previews or promos precede it.

A brand-new 2K master yields a high-quality 1080p/AVC MPEG-4 transfer that faithfully honors Charles Lang's Oscar-nominated cinematography and breathes new life into this long-neglected, 80-year-old film. Though some periodic print damage reminds us of the movie's advanced age, the image remains largely clean throughout. A healthy grain structure maintains the feel of celluloid, excellent clarity and contrast produce a vibrant picture that exudes a fair amount of depth, and the Oscar-nominated special effects are seamlessly integrated into the film's fabric. Rich blacks anchor the frame, the bright whites resist blooming, and nicely varied grays help crystallize fine details, especially during the wide and long shots of the combat sequences. Though shadow delineation is strong, a bit of crush occasionally creeps in during nocturnal scenes. Sharp close-ups highlight both the beauty and dishevelment of the female cast, Sonny Tufts' scraggly beard, and the grit and grime that dots all the actors' faces during the battle scenes. This is an impressive presentation of a long-neglected film that fans of World War II movies, Colbert, Goddard, and Lake will certainly appreciate.

The DTS-HD Master Audio 2.0 mono track delivers strong results, especially during the battle sequences. Sonic accents like rumbling plane engines, a grenade blast, and exploding shells are crisply rendered, and excellent fidelity enhances Miklós Rózsa's rousing, dramatic score. Pleasing dynamic range gives the track plenty of room to breathe and strong bass frequencies heighten its impact. All the dialogue is well prioritized and easy to comprehend and any age-related hiss, pops, or crackle have been erased. War films demand robust audio, and though this track can't compare to modern, multi-channel mixes, it thrusts us into the action and serves the film well.

A couple of extras are included on the disc.

So Proudly We Hail is first and foremost a rousing piece of World War II propaganda, but it's also a well-made film honoring the contributions and sacrifices of a legion of Army nurses who valiantly served in the Pacific theater. Claudette Colbert, Paulette Goddard, and Veronica Lake file strong performances and the Oscar-nominated special effects put us in the thick of battle. A brand-new 2K master and vibrant audio bring even more immediacy to this action-packed tale, and an engaging commentary track supplies context and perspective. So Proudly We Hail addresses an important topic with frankness and sincerity and holds up well today. Recommended.