The Ozploitation classic and one of the most unique shockers of the 80s returns like never before: Michael Murphy (MANHATTAN), Dan Shor (BILL AND TED'S EXCELLENT ADVENTURE) and Fiona Lewis (THE FURY) star in this grisly saga of bizarre experiments, butchered teens, New Zealand doubling for suburban Illinois, and a killer in a Tor Johnson mask. Dey Young (ROCK 'N' ROLL HIGH SCHOOL), Marc McClure (SUPERMAN), Scott Brady (JOHNNY GUITAR) and Academy Award® winner Louise Fletcher (ONE FLEW OVER THE CUCKOO'S NEST) co-star in this cult favorite released in America as STRANGE BEHAVIOR featuring a hypnotic score by Tangerine Dream, co-written by the Oscar®-winning director of CHICAGO, directed by the producer of TWO LANE BLACKTOP, now loaded with Extras and transferred in HD from the original negative for the first time ever.

Why waste time and energy devising some witty title when we can simply call it for what is: a corny horror flick with 'Dead Kids.' And the movie itself wastes no time in delivering that promise, as it opens immediately on a random nameless teenager up to mischief the moment mom and dad leave the house. Then again, considering that this is a story about a sleepy town where teenagers are turned into mindless killers, perhaps the title is cleverer and more suggestive than initially anticipated. Also, to be fair, the original title, 'Strange Behavior,' as it is known around the world, is an arguably more accurate summation of the plot's central theme. And frankly, the concept of kids lacking freewill dutifully obeying the orders of some mysterious leader sounds like an intriguing idea.

However, it's a shame the end product doesn't live up to its potential. In all honesty, in spite of whatever positives could be said about the title, the aforementioned first kill turns out to be a sad indicator of what to expect from the rest of this small, independent production from award-winning writer Bill Condon, who a decade later would go on to direct 'Gods and Monsters' and 'Dreamgirls.' The acting is not only horrendously cringe-worthy, but the setup is poorly done and boringly paced while the boy is slain off-screen — only the shadowy silhouette of the unknown assailant is seen on the wall. Directed by Michael Laughlin ('Two-Lane Blacktop'), the entire sequence feels like a slow plodding exercise on the audience's patience, failing to create the slightest bit of tension. And sadly, the rest of the film never improves upon what was meant as a shocking opener.

It's unfortunate, really, to point out how much of a disappointment this Condon/Laughlin collaboration turned out to be. There's a genuine feel of something far more astute and inventive working just beneath the surface of the story, which consciously employs familiar "slasher" conventions with a B-movie sci-fi atmosphere. High school teen Pete, played by Dan Shor ('Tron,' 'Bill & Ted's Excellent Adventure'), and his best bud Oliver, played Marc McClure ('Superman,' 'Back to the Future') participate in a scientific test for money at their local college. The two are a pair of innocent kids struggling with the usual drama of girls, partying, grades and the pressure of deciding what to do with their after graduation. Meanwhile, there is a killer on the loose killing their classmates, and Pete's dad, Sheriff Brady (Michael Murphy), suspects university professors Parkinson (Fiona Lewis) and long-dead Dr. Le Sange (Arthur Dignam) are behind the murders. 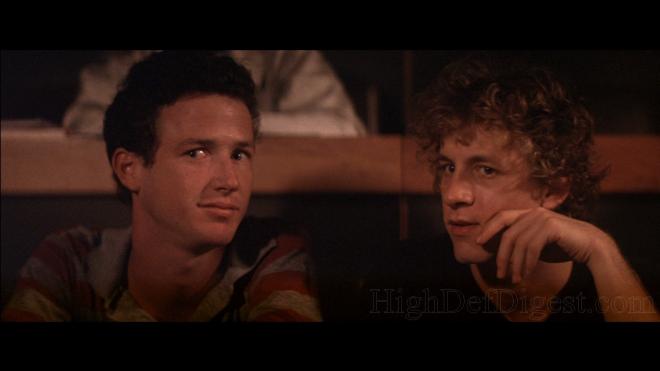 The whole thing sounds a bit kooky and goofy, and for the most part, the filmmakers indulge the silliness with a small level of seriousness. To keep viewers on their toes, they don't keep the killer a secret for very long and quickly reveal that there is more than one person involved. So it doesn't take long to piece the clues together, which in effect takes away some the final twist's punch. But then, making it to those final moments without first falling asleep — or at least, nodding off a few times — is probably more of a feat than the filmmakers somehow surprising viewers with one last shocker, which manages to raise more eyebrows in confusion and less as a memorable rude awakening. Added to that, there are small hints of a tongue-in-cheek humor brooding underneath, but it never comes to fruition or made plain enough to garner a few chuckles, let alone laughs.

Reportedly, 'Strange Behavior,' aka 'Dead Kids,' is intended as homage to classic drive-in sci-fi horror, but that only makes the movie all the more perplexing, perhaps even a bit infuriating. There's nothing remotely familiar or recognizable in the production to suggest an association with the genre or that particular period of filmmaking. Unless we take into account the setting — Auckland, New Zealand stands in for a 1950s infused suburban town in Illinois — and the Tor Johnson mask, there is no connection to low-budget pulp from AIP, API, Roger Corman or Ed Wood. Condon and Laughlin's follow-up, 'Strange Invaders,' is the stronger movie that feels and celebrates its late-show, B-movie campiness, and it also stars Oscar-winner Louise Fletcher. Comparing the two films and their intentions, I strangely prefer Condon and Laughlin's second collaboration.

Severin Films brings 'Dead Kids' to Blu-ray as a two-disc combo pack: one a Region Free, BD25 while the other a DVD-9. Both discs are housed inside a blue eco-elite case on opposing panels. At startup, the Blu-ray goes straight to a standard menu selection with a silent static screen.

The indie horror flick arrives on Blu-ray with a strong 1080p/AVC MPEG-4 encode though it still has it fair share of notable issues. Most evident is the 2.35:1 image looking old and a tad faded, showing that familiar yellowish tint the comes with age. This effects overall contrast levels, making much of the picture seem dull and average though it's consistent from beginning to end. Colors are nicely rendered and saturated for the most part, and blacks are accurate and true, except for a few sequences when resolution drops somewhat, creating a bit of crush in the darker portions of the frame. Fine lines and objects are well-defined with good detailing in the faces, clothing and around buildings, making this a pleasing HD video.

Unfortunately, things don't improve much in the audio department, despite it being faithful to its source. The DTS-HD MA mono soundtrack delivers clean, well-prioritized vocals in the center with appreciable fidelity. Background activity is clear and pretty distinct. Weirdly, the eerie electro-synth music of Tangerine Dream is comparably low and largely feels listless. In fact, the soundfield as a whole lacks presence and depth, coming in fairly flat with a uniform, even mid-range. There's no low bass to speak of, once again making the lossless mix fall a bit on the dull side. All in all, it's not a terrible high-rez track since for the most part, it's clean without a hint of distortion, but it is pretty average.

A kooky silly "slasher" type with aspirations of being an homage to 1950s sci-fi B-movies, 'Dead Kids,' aka 'Strange Behavior,' lacks the charm and wit to be passably entertaining. Coming from Bill Condon and starring Oscar-winner Louise Fletcher, the low-budget horror flick is an easily forgettable attempt, outdone by Condon far more fun follow-up. The Blu-ray arrives with a strong, if badly aged picture quality and a sadly less-satisfying audio presentation. However, with a pair of new supplements thrown into the mix, the overall package is very tempting indeed to cult enthusiasts and collectors of bad, forgotten horror movies.

Sale Price 20.99
List Price 29.95
Buy Now
3rd Party 22.34
In Stock.
See what people are saying about this story or others
See Comments in Forum
Previous Next
Pre-Orders
Tomorrow's latest releases