The Ozploitation classic and one of the most unique vampire movies of our time is back like you've never seen it before: David Hemmings (BLOW-UP, DEEP RED) and Henry Silva (THE MANCHURIAN CANDIDATE) star as executives of an international blood-drinking cartel known as The Brotherhood. But when they abduct a descendant (Chantal Contouri of THE DAY AFTER HALLOWEEN ) of Elizabeth Bathory to reboot her depraved legacy, she must escape before the corporation can expand their human blood cow dairies and create a vampire master race. Max Phipps (THE ROAD WARRIOR) co-stars in this gripping shocker directed by Rod Hardy (Prisoner: Cell Block H), produced by Antony Ginnane (PATRICK, TURKEY SHOOT), and now transferred in HD from the original negative for the first time ever anywhere!

On any other occasion, the sight of a man with a puffed up blonde perm would have me gleefully loving a movie, no matter how awful. And thankfully, Rod Hardy's achingly stunning 'Thirst' not only features such a character as one of several villains, but the film also offers a fascinating conspiracy tale about a disturbed cult obsessed with drinking human blood. But putting aside the plot for a moment, I have to comment on how the production is wonderfully trapped in its period, so immersed in late 70s culture that it actually becomes part of the film's charm. For me, the blonde perm baddie, who has deep, black circles around his eyes as if from a lack of sleep, and the big-mustachioed love-interest already make this Aussie horror drama a memorable piece always worth revisiting.

On a more serious note, Hardy's stylishly gothic film is an engrossing and bewitching blend of vampire folklore and surrealist sci-fi that loves wearing its love of horror cinema on its sleeve. The opening credits commence with our heroine Kate Davis (Chantal Contouri) slowly opening her eyes while the tumultuous music of Brian May, accompanied by an awesome funky bass riff, build the anticipation and suspense. Suddenly, she quickly sits up screaming as the camera pulls back, allowing the audience to discover she's awakened from a coffin inside a tomb with candles burning all around. The whole sequence could be something straight from a Hammer Films production — at any moment, Christopher Lee could walk in to greet his new bride. It's beautifully done, capturing our attention as the story flashes back to a few days earlier, revealing Kate's journey to the stone vault.

Compared to the opening, which wonderfully sets the stage for something phantasmagoric and dreamlike, the next few minutes are a bit on the slow side, introducing the dark clandestine organization and giving viewers glimpses of Kate's plush life. Once the story moves to the cult's secret compound where Kate is held captive, the narrative quickly spirals into a bizarre surreal nightmare as the leaders of The Brotherhood (Max Phipps, David Hemmings, Shirley Cameron and Henry Silva) reveal Kate is the direct descendant of Countess Elizabeth Báthory. In the sterile hospital-like facility known as the "dairy farm," the cult believes they have achieved a higher state of conscious through their consumption of human blood, which they harvest from brainwashed people. Because she's part of renowned ancestry of blood-drinkers, they want Kate to join the organization and unite her bloodline with another legendary lineage. 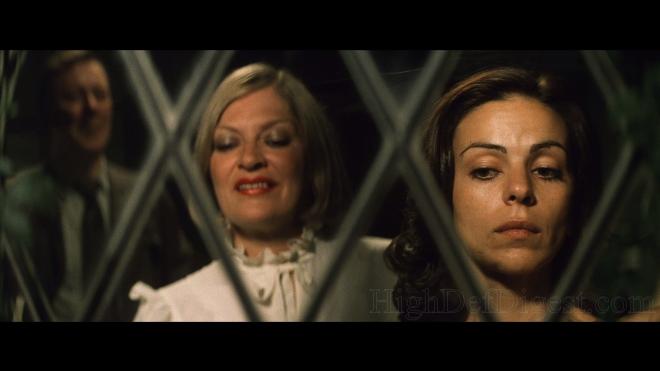 As offbeat and freakishly bizarre as that already sounds, for me, the moment that finally sold the movie and Hardy's talent is Kate's first attempt to escape, which occurs soon after everything is explained. As she tries diligently to refill a stolen truck with gasoline, cars heading to the compound are constantly driving by, and the suspense comes from not knowing which one will recognize her. Of course, someone finally does and returns Kate to the leaders, who induce Kate into a hallucinogenic coma-state where the film suddenly grows trippier than before. In her dreams, she revisits traumatic childhood memories, is disgusted by her fantasies with her boyfriend and endlessly haunted by the sight of blood. Throughout the entire sequence, we're never sure when she's dreaming, leaving a lasting effect for the remainder of the narrative.

With excellent production design by Jon Dowding and brilliant photography by Vincent Monton, 'Thirst' is an impressive vampire film that isn't exactly about vampires, as much as it's about a twisted, perverse cult. What I love best is that Hardy and his team are very patient with Kate's eventual downfall. Repulsed by the sight of blood, the organization and even the possibility she could be related to one of the world's most infamous serial killers, Kate doesn't easily accept her fate, continuously fighting what the leaders claim to be her innate instincts, a deep, devastating hunger for blood. And Contouri does marvelously in the role with a passionately aching disgust, making the thought of being a vampire unfathomable and undesirable. Hardy treats the subject matter with genuine seriousness but with a patience that allows the narrative to unfold at its own pace, making 'Thirst' a wonderfully entertaining vampire flick.

Severin Films brings 'Thirst' to Blu-ray as a two-disc combo pack: one a Region Free, BD25 while the other is a DVD-9. Both discs are housed inside a blue eco-elite case on opposing panels. At startup, the Blu-ray goes straight to a standard menu selection with a silent static screen.

The Australian horror flick hungers for Blu-ray with a great-looking 1080p/AVC MPEG-4 encode, except that it shows the usual yellowish hue that only comes from age, along with a few sporadic white specks. Affected by this, contrast is a tad on the weak, slightly dull side, making flesh tones appear pretty pale, but it's fairly consistent with crisp, clean whites. A couple scenes are poorly resolved, though for the most part, the 2.35:1 image is nicely detailed with several sequences looking particularly sharp, and close-ups are revealing with excellent texture in the faces. Black levels are strong and generally accurate, but some of the finer details and objects are lost in the shadows. Colors are somewhat lackluster and flat, yet primaries are well-saturated and cleanly rendered.

Although it would have been great to listen in lossless audio, the mono soundtrack provided here in legacy Dolby Digital is surprisingly good and impressive. Dialogue is pristine with excellent intonation and intelligibility in the vocals, especially in the emotional performance of Chantal Contouri. Imaging is fairly broad and engaging with rich clarity and fidelity of the background activity, providing the design with a great deal of presence and strong acoustics. Dynamic range is not particularly extensive, but the highs are detailed with sharp, room-penetrating mids, allowing Brian May's score to really shine. Bass is rather tame and a bit bland, but still adequate for a film of this vintage, making this an enjoyable mix.

Offering a fascinating conspiracy tale about a disturbed cult obsessed with drinking human blood, Rod Hardy's 'Thirst' is an engrossing, stylish, and bewitching blend of vampire folklore and surrealist sci-fi. The Blu-ray arrives with a great-looking high-def transfer and a very good audio presentation. Bonus features are sadly lacking, but vampire and genre fans will be content adding this cult Aussie favorite to the collection.

Sale Price 29.49
Buy Now
3rd Party 20.97
In Stock.
See what people are saying about this story or others
See Comments in Forum
Previous Next
Pre-Orders
Tomorrow's latest releases