Stranger by the Lake

The allure of danger can be an intoxicatingly powerful force. And when that danger is mixed with a heavy dose of sexual attraction, it becomes a beast capable of consuming an individual whole. It seems that new love, or simply, just lust, can rewire the brain in such a way that the object of another person's affection becomes temporarily incapable of any error; they are creatures so perfect in the eyes of their pursuer, they get a free pass regardless the air of darkness wafting about them. The hint of danger and risk is only likely to enhance the attraction, as proximity to that which is perceived to be unsafe only intensified desire.

That is the basis of 'Stranger by the Lake,' from writer-director Alain Guiraudie, a phenomenal erotic thriller that follows Franck (Pierre Deladonchamps), as he spends his summer cruising for sexual encounters among the men at a popular spot around a lake in the south of France. Franck encounters several men, some of whom strike his fancy, some whom simply become acquaintances. His life – at least the part of it that concerns finding physical encounters with strangers at a lake – is one of routine, which Guiraudie depicts through the use of the same static shot of Franck's beat-up old car coming to park near the lake day after day. Franck even strikes up a nonsexual relationship with Henri (Patrick D'Assumçao), an older loner, who sits on the rocky shores, watching the usually naked men go by. Always looking, but never touching.

Guiraudie never makes any overt connection with the threat of HIV/AIDS and the thrill and danger associated with having unprotected sex with a seemingly endless string of new lovers, but he doesn't have to. The degree to which he sets up the conditions and terms of the inclusive culture of the lake tells the audience everything they need to know. One man brushes aside a pile of used condoms before using the space for the exact same purpose. There are no hang-ups, no consequences in this destination for pleasure-seekers; it is a free-for-all paradise. 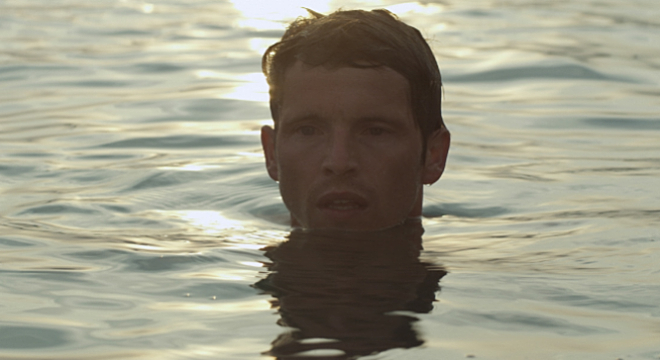 The routine of paradise comes to define Franck; it almost becomes a compulsion to journey to the lake and see what may or may not occur. This continues until he happens across Michel (Christophe Paou), a strikingly handsome, slightly older, mustachioed man who immediately captivates the young man. At first, Franck is on the outside looking in. He happens across Michel and his partner in the woods adjacent to the lake, and though their eyes briefly meet, the two remain strangers. That is, until Franck witnesses Michel drowning his young lover in the lake and then calmly swimming back to the beach under the cover of the setting sun.

And yet, despite knowing this, and despite Michel not knowing what he knows, Franck continues to pursue a sexual relationship that becomes part of the film's examination of the allure of danger, and how often it intersects with desire. The enclave is itself a protected community wherein the unofficial members can seek pleasure to their heart's content, and when the sanctity of their setting is threatened by the presence of a murderer among them, few respond with anything more drastic than simply skipping a day at the lake. As Franck's encounters with Michel become increasingly passionate and explicit, the tension that builds as a result of his knowledge and continued close association with his dangerous new lover becomes nearly overwhelming.

But although the lake soon becomes the target of a criminal investigation by a lone detective played by Jérôme Chappatte, 'Stranger' by the Lake' doesn't resort to transforming itself into a rote police procedural. Instead, the detective is seen as an interloper, a reminder of the literally unseen world outside the secluded confines of the lake that ostensibly marginalized the gay culture to the degree that the formation of a private setting such as the lake became their only recourse. The effect, then, is the detective is met with silence and lies when asking questions about the dead man, as the group instinctively seeks to protect itself from the world beyond – even when justice needs to be met.

For his part, Guiraudie treats the thriller aspect of his film almost an unintentional byproduct, which in turn makes it all the more disconcerting and tense. The film teases the audience by initially presenting itself as a tiny tale of routine that inexplicably explodes into something much larger and far more dangerous. And yet the director doesn't alter the already unhurried pace in any way. It is almost as if it the film happened up on its own murderous goings-on quite by accident and spends the rest of its runtime pondering the ramifications. In the same vein, 'Stranger by the Lake' doesn't take time out for blatant didactic overtures; instead it scrutinizes the threshold for reckless, indulgent behavior by drawing a compelling correlation through the twinning of two explicit instances.

'Stranger by the Lake' is an engrossing (albeit incredibly explicit) tale of the appeal and fascination some have with courting danger, and how someone like Franck can find reason in doing what he does, because the impulse of attraction and desire is so often unmindful of plain old common sense. And it is through this recognition of the universal impulse to ignore good judgment for the sake of seeking pleasure that the film becomes most enthralling.

'Stranger by the Lake' comes from Strand Releasing as a single 50GB Blu-ray disc in the standard keepcase. The film does not contain any previews ahead of the top menu. Instead, the viewer will be allowed to access the movie directly, or go through the many special features it found on the disc.

With its 1080p AVC/MPEG-4 encoded transfer, 'Stranger by the Lake' is one of the best-looking discs to come from Strand. While most of this likely has to do with the fact the film premiered last year, it shouldn't take anything away from how strikingly detailed and consistent the image actually is. Much of the film takes place during bright summer days, and the image captures the essence of the setting with tremendous amounts of detail. One can practically count the rocks on the beach, if they were so inclined. Additionally, facial features and other textures are all on display – though clothing is something of a rarity for this film. Colors are consistently vivid, and manage to capture the bright lushness of the lake's surrounding woods. Contrast remains incredibly high throughout the film producing full-bodied black levels and whites that never look overblown.

Certain night scenes do tend to take on an overwhelming inkiness, but that seems to be deliberate on behalf of the filmmaker, as it adds a great deal to the tension of the situation. All in all, this is a fantastic looking disc that rarely has a misstep of any kind.

The French Dolby Digital 5.1 mix is also quite good. The mix isn't tasked with doing much other than making sure the dialogue is clean and easily heard, which it does with great ease here. The sound is primarily loaded through the front, as dialogue spills through the center channel while various ambient effects are filtered through the front and rear channels as needed. There's little that is obvious about the mix, so sounds are generally floating between channels, generating an effortless immersive experience that highlights the sounds of the lake, the breeze blowing through the tall grass, and the voices of the eternally present others floating around the background.

This is a quiet film that makes pointed use of every bit of dialogue and sound effect, so that they are distinct and purposeful. It's not going to be used as reference for anyone's next demo, but it certainly goes above and beyond in terms of setting the tone of a wonderful film.

Interview with Alain Guiraudie (HD, 17 min.) – Guiraudie gives an informative interview, discussing many different aspects of 'Stranger by the Lake' like how the casting of Paou shaped the character of Michel, and how the use of handheld versus fixed cameras to generate mise-en-scène.

Deleted Scenes (HD, 4 min.) – A short collection of scenes that mostly serve to flesh out character backstory and the way one individual feels about another.

Heroes Never Die (Les Heros Sont Immortels) (HD, 13 min.) – Two young men simply hang out at night and talk. They sit in a deserted town square at night, waiting for a third man who is apparently going to fund their newspaper.

Straight Ahead Until Morning (Tout Droit Jusqu'au Matin) (HD, 10 min.) – A young man working as a night watchman wanders the streets at night, while contemplating what it is that he should be doing with his life.

Although certain elements of 'Stranger by the Lake' suggest it might fit into the subgenre of homoerotica, the film itself is more concerned with the idea of a subgenre itself, or, in this case a small microcosm like the populated by the men gathering at the lake for bouts of passionate, anonymous sex. For the film to also feature a compelling thriller aspect seems to suggest that Guiraudie is also interested in examining what constitutes desire, especially when it becomes unquenchable, reckless, and even illogical. This is captivating film that features terrific picture, very good sound, and a host of informative extras that give a glimpse into the mind of the director. Highly recommended.

Sale Price 32.99
Buy Now
3rd Party 16.49
In Stock.
See what people are saying about this story or others
See Comments in Forum
Previous Next
Pre-Orders
Tomorrow's latest releases