Three young campers out for what they hope to be a fun-filled weekend find their plans spoiled by a maniacal killer who stalks the forest in search of fresh victims.

When it's all said and done, 'The Final Terror''s only true claim to fame — the reason for its continued cult following — is that the movie features several now recognizable faces. In fact, it was due to the growing popularity of a trio of actors at the time that the low-budget "slasher" flick ever saw the light of day. When production ended in 1981, the filmmakers were met with rebuffs from distributors and the film was shelved for two years. Despite it being perfectly in line with current box-office trends — conventional "slasher" archetype with unknown assailant and a group of mischievous youths in the woods — no one wanted to touch the movie. As for the exact reasons for this, we may never know, but one can speculate that perhaps it was due to it being rather boring when compared to other horror movies.

Funnily enough, the movie is actually not half bad, with several amusing pockets of suspense and a killer that interestingly uses camouflage as it hunts a small group of city kids learning a few camping ropes. From director Andrew Davis, who went on to direct a pair of Steven Seagal vehicles, the feature-length version of 'The Fugitive' and the comedy-adventure 'Holes,' the finished product is smarter and more polished than most of the same genre, especially those from the same general period. Although it doesn't come with as many kills, the style and photography, which was probably also done by Davis, suggest that the filmmakers wanted a more atmospheric feel with scares rather than violent gore. A better description would be a traditional thriller.

The script comes from Ronald Shusett ('Alien,' 'Total Recall'), Neill D. Hicks and Jon George, and it's the furthest thing from original. When it finally released in early 1983, audiences would quickly recognize the formula, which is comparable to the likes of Joe Giannone's 'Madman' and three 'Friday the 13th' movies. However, the storyline shares more similarities with Tony Maylam's 'The Burning,' especially the idea of the kids traveling down river on a raft. Taken more as thriller than typical "slasher" though, I see the movie more akin to John Boorman's 'Deliverance' meets Alfred Hitchcock's 'Psycho.' Only without the taunting rape scene and expertise of a master filmmaker like Hitchcock. Nevertheless, the plot being this bizarre hodgepodge of different influences is partly what makes Davis's film a stimulating watch, and not just another easily discarded horror flick capitalizing on the popularity of a particular genre. 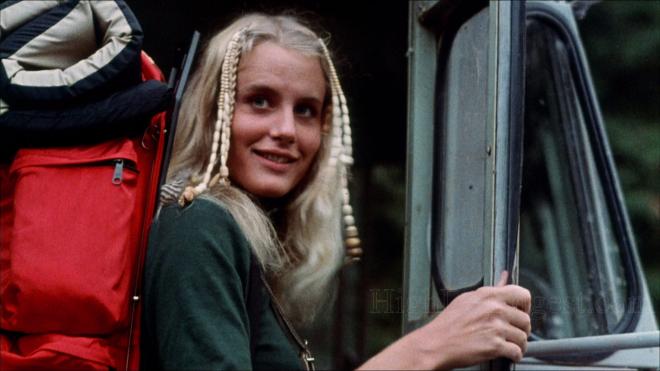 Speaking of which, as mentioned earlier, the movie was finally released as an attempt to capitalize on the sudden rise of three particular actors, though most of the young cast are actually familiar faces to most film buffs. Daryl Hannah is the easiest to spot playing the timid, innocent beauty Windy, but once things go fatally bonkers, so does she. A little. As the tough street kid Marco, Adrian Zmed of 'Bachelor Party' and 'T.J. Hooker' is cool and confident, delivering possibly the best performance of the bunch. At the time, Rachel Ward was an up-and-coming actress after her roles in 'Night School' and 'Dead Men Don't Wear Plaid.' The potential for being a small hit was there, especially during the golden years of the slasher, but it bombed and was quickly forgotten, except within circles of the most hardened horror fans.

'The Final Terror' also features a memorable appearance by Joe Pantoliano as the backwoods rustic Eggar. Although continuously picked on by others, the character reveals a dark mean streak that instantly lays our suspicions of him as the likely killer. For 'Animal House' and Twisted Sister fans, Mark Metcalf is the leader of the campers while 'Buckaroo Banzai' geeks can get a kick out of a dark-haired Lewis Smith leading the troupe out of danger. Akosua Busia, best remembered as Nettie in Steven Spielberg's 'The Color Purple,' plays a small role as the young woman that can't handle the stress of being hunted. When it comes down to it, seeing all these faces is ultimately the film's best aspect. Everything else is the typical "slasher," though efficient and surprisingly polished storywise. If for nothing else, Davis's film is worth visiting for fans of the subgenre.

Shout! Factory brings 'The Final Terror' to Blu-ray as a two-disc combo pack under the distributor's Scream Factory line. The Region A locked, BD50 disc is housed inside the normal blue case with a second DVD-9 disc on the opposing panel. At startup, the disc goes to a main menu screen with options along the bottom, full-motion clips and music playing in the background.

At the start, a white text explains that the original prints are all but lost, and this high-def transfer was made from the best possible elements collected from various collectors. Basically, it asks that viewers be somewhat forgiving of the video quality because the 1080p/AVC MPEG-4 encode is mostly on the blurry side and in poor resolution.

Nevertheless, with consideration to the origins and condition of the source, the picture is surprisingly not too terrible with generally strong definition and good detailing of the surrounding foliage, clothing and facial complexions. Contrast is bland, making for a noticeably flat 1.85:1 image, and blacks can at times be a bit overwhelming, pretty much ruining shadow details. Overall color palette is dull and listless, but primaries are decently accurate. It's clear there's been some effort to clean the elements, but a thin layer of grain consistently washes over the presentation, giving it a welcomed film-like appearance.

On the audio front, things improve dramatically though it's still with some consideration to the condition of the source. The DTS-HD Master Audio mono soundtrack is understandably limited to the center channel where dialogue is delivered cleanly with excellent intelligibility and fidelity. Background activity offers plenty of clarity and discrete effects to keep viewers engaged, but overall imaging lacks some presence and feels pretty narrow. This then creates a somewhat restricted and uniform mid-range although the track never really pushes into the upper frequencies. Low bass is listless and nearly non-existent, but with all things considered, the lossless mix pleases and adequately gets the job done.

'The Final Terror''s only true claim to fame — the reason for its continued cult following — is that the movie features several now recognizable faces as the victims of a backwoods maniac. A "slasher" thriller with 'Deliverance' aspirations, Andrew Davis's film is efficient and surprisingly polished, but ultimately pretty dull, with only a few pockets of suspense. The Blu-ray features the best possible presentation of a minor, long-forgotten horror flick, but the audio presentation is slightly stronger. With decently good supplements, the overall package might attract the curious, but in the end, only hardened fans of the genre will want it in their collection.

Sale Price 14.99
Buy Now
3rd Party 49.95
In Stock.
See what people are saying about this story or others
See Comments in Forum
Previous Next
Pre-Orders
Tomorrow's latest releases