Ginger (Katharine Isabelle) and Brigitte (Emily Perkins) are two teenage sisters fed up with the routine of high school, dating and parents. They long for something which would bring a little excitement into their lives, but when Ginger is attacked by a werewolf it's maybe a little too much, too soon. Over the following months, Ginger undergoes some surprising physical and psychological transformations. Brigitte does her best to fight against the changes and win her sister back, but with Ginger having now infected her boyfriend Jason (Jesse Moss), it seems that she might be fighting a losing battle.

I am an unabashed fan of John Fawcett's 'Ginger Snaps,' a splendid Canadian film featuring a werewolf plot with serious bite, which sadly is somewhat of a rare treat in movies. My love for this little flick, which has quickly grown in cult status over the years, extends from the characters and performances down to its modest production value and a story Fawcett co-wrote with Karen Walton ('Orphan Black') about modern adolescence. In fact, there's a great deal more going on within the film that's worth further study and critical analysis, touching on various feminists ideas about a teenage girl and themes of sisterhood. But that's a discussion for another time where space is a bit more forgiven.

With that said, the film remains, even on a surface level viewing, ingeniously entertaining and clever, starting with believable performances by Katharine Isabelle ('Freddy vs. Jason,' 'American Mary,' 'Hannibal') and Emily Perkins ('Prozac Nation,' 'Juno'). The two star as socially withdrawn, death-obsessed sisters Ginger and Brigitte Fitzgerald, outcasts who whisper gruesome fantasies on the demise of the popular kids at their high school. Demonstrating Fawcett and Walton had their thumb on the pulse of a cultural zeitgeist fueled by gravely doomed teenage angst, the production is coincidentally marred by two school shootings that occurred at around the same time. The Fitzgerald sisters, who are shown as talented and artistically creative, interestingly give voice to the fear and anxiety of kids who feels unwanted and detached by peers.

Showing just how smart of a horror-flick this is, the title aptly and perfectly reflects this theme of apprehension and malaise reaching an intensely violent boiling point. At once, the name is an obvious pun to the ginger-and-cinnamon-flavored biscuits, but it also refers to when Isabelle's Ginger suddenly loses her sense of self to the confusing and difficult to manage hormones. Deeper still, it suggests the character's mental breakdown and her drive towards acts of violence. Despite being teenagers at some point in their lives, the adults in the film are completely oblivious. The school counselor (Peter Keleghan) talks to her like a juvenile delinquent while mom (a great Mimi Rogers) is detached, perhaps deliberately ignoring her daughter's individual problems in favor of gaudily celebrating cultural norms and dad (John Bourgeois) is an uninvolved observer. 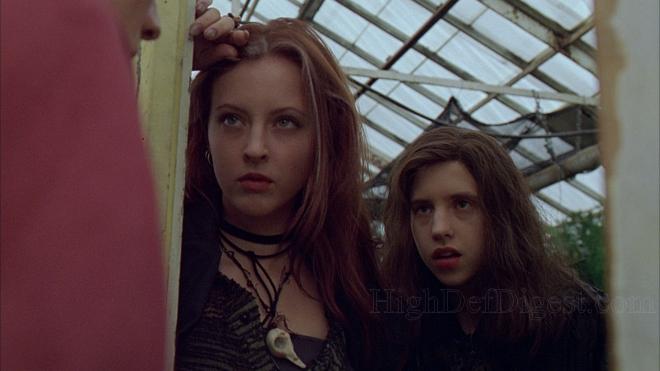 Wonderfully entertaining as the movie is, the story is not without a couple drawbacks, most notably the use of the lycanthrope mythology used as a metaphor for adolescence. Not that it's a bad metaphor because it's actually rather ingenious. Instead, the problem is that Fawcett turns it into a blatantly literal conceit that leaves little room for audience discovering the connection on their own. Nevertheless, part of the trope's genius is that in spite of being obvious, it is also a clever and refreshing twist because the werewolf metaphor has traditionally being used for male puberty and aggression. Here, Ginger is at a point in her life where she struggles with the challenges of being a woman and discovering sexual empowerment at a time when society still frowned upon it. Even the sisters view this stage with disappointing disgust.

Making 'Ginger Snaps' all the more wickedly delightful is Fawcett and his team injecting the tale of contemporary teen angst with a bitingly dark sense of humor. The popular girl at school (Danielle Hampton) is continuously snubbed by the town's hot throb Sam (Kris Lemche) for the awkwardly timid Brigitte, and the sexually promiscuous Jason (Jesse Moss) gets his comeuppance when his hormones go into overdrive. The plot itself often feels reminiscent, almost homage-like, of David Cronenberg's body horror style and several scenes genuinely disturb. Fawcett smartly refrained from CG imagery in favor of on-screen practical effects, giving the film an added feel of a classic horror movie. Done on a modest production, 'Ginger Snaps' is a terrific and intelligent horror flick that lends itself well for watching analytically or for pure entertainment.

Shout! Factory brings 'Ginger Snaps' to Blu-ray as a two-disc combo Collector's Edition under the distributor's Scream Factory line. The Region A locked, BD50 disc is housed inside a blue, eco-elite case with brand new reversible cover art and cardboard slipcover. At startup, viewers are taken to a basic menu screen with music and full-motion clips. Also, if you buy direct from the Shout! website, fans can get an exclusive, limited edition poster of the newly commissioned artwork with their purchase!

Sadly, Ginger is only teething at the moment but tries to take a bite out of Blu-ray nonetheless with a 1080p/AVC MPEG-4 encode that suspiciously looks like the same master used for the DVD. This is not a terrible thing since the video offers an appreciable upgrade over its predecessor with several great-looking moments of sharp detailing and excellent resolution. Unfortunately, artificial sharpening appears to be in evidence throughout with noticeable ringing occurring in daylight sequences. Contrast is on the bland side, creating a mostly flat picture and highlights looking a bit hot. Black levels waver from murky to accurate with average shadow delineation while colors are well-balanced and cleanly rendered. Although a fine layer of grain can be more pronounced in a couple poorly-lit scenes, in general, it's stable and consistent. Given its modest production and history, this 1.85:1 image has a welcomed film-like appeal and is currently the strongest presentation seen on home video.

As the saying goes, her bark is worse than her bite. Or to be clearer, Ginger has a meaner, sexier growl than her hairy looks. And Shout offers fans two listening options for enjoying her snarling howls: an upgraded 5.1 upmix or a stereo option.

The former is not horrible, as I imagine some will find it decently pleasing with the several discrete but sporadic rear effects. Granted, it is enveloping at times, but the DTS-HD MA soundtrack also feels artificial and often forced with easy to localize sounds that are sometimes distracting. The front soundstage is noticeably overextended and thinned with a uniform, bright mid-range that tends to drown out the vocals and an exaggerated low-end that feels muddy and inflated.

The stereo option, on the other hand, is closer to the original design, making it superior, more natural and definitely the preferred choice. Imaging is broad and welcoming with plenty of discrete, intelligible activity in the background. Clean, well-balanced channel separation with clear, detailed dynamics and acoustics generates an excellent soundfield that's terrifically engaging and full of warmth. Dialogue is precise and pristine in the center at all times, and low bass is accurate with an appropriate, deep response when called upon, making this an excellent lossless mix.

As an unabashed fan, John Fawcett's 'Ginger Snaps' is wildly entertaining with enough brains and gore to amuse a wide audience. Featuring a werewolf plot with serious bite, the splendid Canadian cult film comes with amazing performances from the two main leads and an intelligently clever story that uses the lycanthrope myth as a metaphor for the challenges of adolescence. The Blu-ray comes with strong picture quality and an excellent audio presentation. With a good and healthy assortment of supplements, the overall package makes a great addition to the cult library, and neophytes will want to give it rent.

Sale Price 14.99
Buy Now
3rd Party 16.23
In Stock.
See what people are saying about this story or others
See Comments in Forum
Previous Next
Pre-Orders
Tomorrow's latest releases