Long before Raiders of the Lost Ark, there was Secret of the Incas, an exotic Peruvian adventure that features an Indiana Jones doppelgänger. Charlton Heston donned the iconic fedora hat and leather jacket when Harrison Ford was just a 12-year-old, and he brings plenty of machismo to this fun but somewhat labored tale about the search for a coveted Incan relic. Solid audio and stellar supplements distinguish Imprint's limited edition release, but some much-needed remastering would definitely improve the vibrant, colorful, but occasionally fuzzy transfer. For that reason, this handsomely packaged edition is For Fans Only.

If adventure has a name, it's...Harry Steele? Though it sounds macho, the name somehow lacks the cachet of Indiana Jones, but in his leather jacket and fedora hat actor Charlton Heston gives Harrison Ford a run for his money as an intrepid explorer searching for a valuable relic in Secret of the Incas. Director Jerry Hopper's exotic yarn can't compete with Steven Spielberg's thrill-a-minute blockbuster Raiders of the Lost Ark, but extensive location shooting in Peru, lush Technicolor photography, and Heston's cocksure bravado make this South American treasure hunt a fun cinematic journey.

"Money sings and I love music," says Harry, an opportunistic guide who shepherds wide-eyed, naive American tourists around Cuzco, Peru. Harry uses his scruffy good looks and tough-guy charm to milk tips from his smitten female clients, but that's peanuts compared to a much bigger prize that captures his fancy. Legend has it an ancient, bejeweled gold sunburst is hidden in an Incan tomb at Machu Picchu, and the bedazzled Harry salivates at the prospect of finding it. So, too, does his aged associate, Ed Morgan (Thomas Mitchell), who will stop at nothing to get his hands on the sacred relic.

Without transport to reach the remote ruins, Harry takes advantage of the desperate plight of Elena Antonescu (Nicole Maurey), a Romanian defector who's being doggedly pursued by Communist officials from her native country. Harry enlists her help in stealing a plane by dangling the promise of flying her to Mexico, but once in the air, he heads toward Machu Picchu. After an exhausting journey to the site (that's punctuated by an amorous tryst), the pair comes upon an archeological expedition led by Dr. Stanley Moorehead (Robert Young), who also hopes to find the sunburst and return it to the Incan people, who believe its powerful aura will spark a tribal renaissance. Elena catches Dr. Moorehead's eye and romantic intrigue ensues, but will Harry choose riches over his beautiful traveling partner? And will the ruthless Morgan, who also turns up on the scene, foil everyone's chance to unearth the precious sunburst? 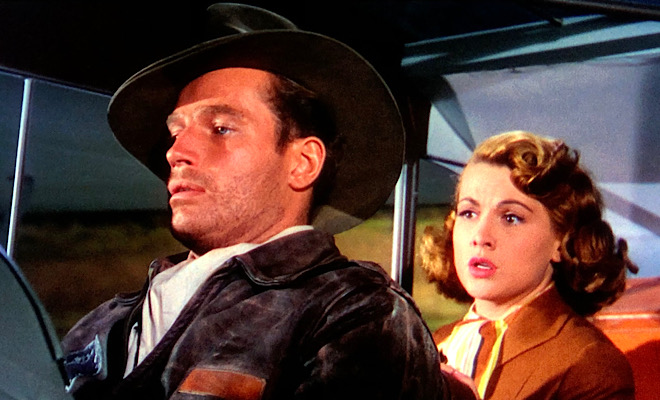 On paper, the plot teems with action, but there are surprisingly few thrills on film. Risqué dialogue, native pageantry, and rugged locales fuel Secret of the Incas, but aside from a couple of brief tussles, the movie is fairly tame. Tensions don't amp up until the climax, which surely inspired a scene in Raiders of the Lost Ark. Watching Secret of the Incas from a post-Indy perspective, it's tough not to rue what seems like wasted potential, but back in the mid-1950s, the Peruvian locations and culture were exotic enough to satisfy audiences who could only dream of visiting such faraway places.

And speaking of exotic, no discussion of Secret of the Incas is complete without mentioning Peruvian native Yma Sumac, a famous singer of the day who possessed a multi-octave range that rivals that of pop diva Mariah Carey. Sumac makes her film debut here as a sultry assistant to Dr. Moorehead and performs a couple of Peruvian songs that showcase her unique talent. The numbers stop the show (not always in a good way), but Sumac is fascinating to watch and lends the drama essential authenticity. 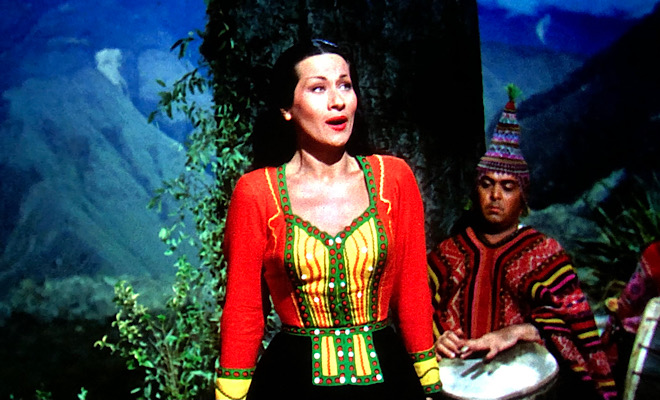 Heston carries the film on his broad shoulders and his spirited portrayal keeps us involved when the plot sputters and stalls. If Secret of the Incas had earned more at the box office, I wonder if more films featuring Harry Steele might have been produced, as he's the type of character that certainly could have been dropped into a number of adventure-filled scenarios across the globe. Heston and Maurey create some sparks, but a spunkier, sassier leading lady (Virginia Mayo, perhaps?) might have added more combustion to the tale.

The strong supporting cast also perks up the proceedings. In what would be his final feature film role before turning his focus to TV, Young makes a believable - if bland - archaeologist, but the far more colorful Mitchell outshines him as the unshaven, rumpled, yet ruthless Morgan. Glenda Farrell, who wisecracked her way through countless snappy Warner Bros films in the 1930s, delivers some zingers as a middle-aged matron with a roving eye, and 1970s sitcom fans will surely spot 25-year-old Marion Ross (the mom from Happy Days) in the opening scene as a prim tourist who quietly pines for Harry (see video clip below).

A few soundstage inserts notwithstanding, Secret of the Incas thrusts us into the wilds of Peru and ancient culture of the Incas and remains an entertaining diversion. The Indiana Jones connections pique interest, but if you're expecting a prologue to the popular franchise, you'll be disappointed. Aside from Harry's outfit and one key scene, Secret of the Incas - for better or worse - stands on its own. It's far from the best adventure flick, but it's also far from the worst. 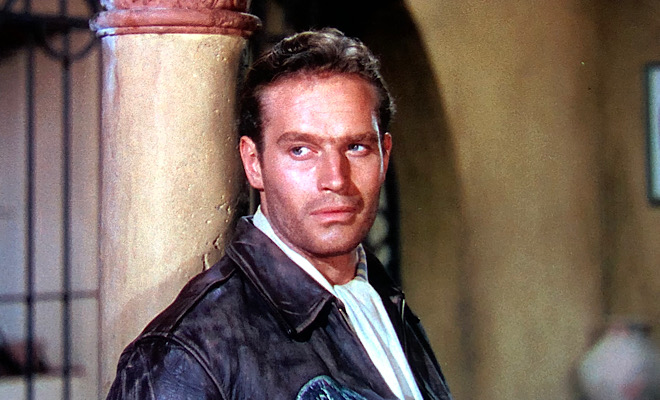 Vital Disc Stats: The Blu-ray
Secret of the Incas arrives on Blu-ray packaged in a standard clear case inside a sturdy cardboard slipcase. Video codec is 1080p/AVC MPEG-4 and audio is LPCM 2.0 mono. Once the disc is inserted into the player, the static menu with music immediately pops up; no previews or promos precede it.

The 1080p/AVC MPEG-4 transfer from Paramount Pictures bursts with lush Technicolor hues and features excellent contrast, but the type of crystal clarity we're used to seeing on Blu-ray discs is slightly lacking here. Though much of the presentation is pleasingly sharp, long shots often look fuzzy and many closer angles appear just a tad diffused...kind of like watching a 3D movie without glasses. Healthy, but not overwhelming grain preserves the feel of celluloid and the three-strip color palette wows the senses on many occasions. The purples, magentas, and pinks in the ponchos of the native Peruvians, Yma Sumac's bold red, yellow, and black dress, the yellow raft that carries Heston and Maurey down the river, the verdant green mesas covering the landscape, and the bright red truck that brings Maurey to Cuzco are all sumptuously saturated and outshine every other element of this transfer.

Inky blacks provide weight, the bright whites resist blooming, and though some crush creeps in during the cave sequences, shadow delineation is generally good. Natural flesh tones remain consistent and crisp close-ups highlight Heston's stubble and the exotic glamor of Maurey and Sumac. The print is far from spotless - white speckling and red, green, and blue blotches are evident throughout - and there are a couple of missing frames, but the damage is only mildly distracting and not surprising due to the film's rare nature. 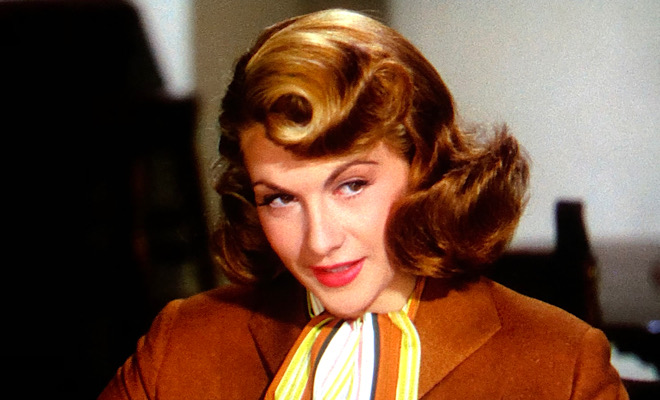 Secret of the Incas definitely deserves a full restoration, but it's unlikely we have one here. There's nothing on the Imprint packaging that denotes remastering, so it's a fair bet not much has been done to spruce up the existing source. The plot thickens, because Kino Lorber has announced an upcoming U.S. release of Secret of the Incas touting a "new HD master from a 4K scan of 35mm YCM three-strip Technicolor elements." Oftentimes, Imprint and Kino share the same transfers, but that doesn't seem to be the case here, so fans of Secret of the Incas might want to hold off purchasing the Imprint disc until the Kino edition comes out and comparisons can be made. The Imprint transfer is certainly watchable and exudes plenty of vibrancy, but the best home video version of the film may be yet to come. 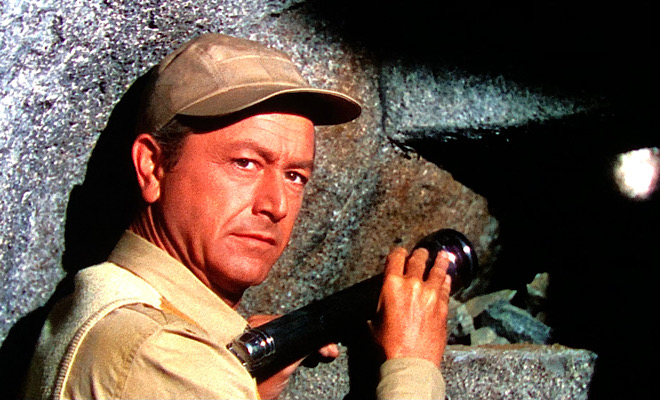 The LPCM 2.0 mono track pumps out clear, well-modulated sound, although a few pops and a bit of crackle do occasionally crop up. A wide dynamic scale handles all the soaring highs and guttural lows of Yma Sumac's multi-octave vocals without any distortion, and good fidelity helps David Buttolph's music score fill the room with ease. Sonic accents like gunfire, shattering glass, and the rumble of airplane engines are distinct and all the dialogue is well prioritized and easy to comprehend. Considering Secret of the Incas has been largely AWOL over the past several decades, this track sounds surprisingly spry and nicely complements the visuals.

Secret of the Incas may have (somewhat) inspired Raiders of the Lost Ark, but it can't - and shouldn't - compete with it. A far different and less action-packed film, this exotic adventure is notable for its rugged Peruvian locations and a cocky, macho performance from a young Charlton Heston. Imprint's serviceable transfer craves remastering, and because an upcoming U.S. release of the movie promises just that, it might be wise to put off purchasing Secret of the Incas until the two editions can be compared. Very good audio and a few interesting supplements enhance Imprint's presentation of this 1950s curio that - like the film's coveted sunburst - has remained a buried treasure for far too long. This is a solid release from Imprint, but for now, it's For Fans Only.