Kevin Reynolds' film The Beast pits the crew of a lost Soviet tank in a cat and mouse game of survival against a trained and determined band of Afghan Mujahideen warriors. This tight and suspenseful film tries to figure out who is the aggressor and the retaliator through the fog of war. Americans playing Russians may be a bit jarring at first, but great performances from George Dzundza, Jason Patrick, and Steven Bauer elevate this blisteringly intense war film. Australian distributor Imprint Films brings The Beast to Blu-ray for the first time with a serviceable A/V presentation with an excellent feature-length documentary to prop up the bonus features. Recommended

The war in Afghanistan continues to drag on. The Soviet army continues to lose as much ground as they gain thanks to the armed and committed Mujahideen warriors. When a tank crew is separated from their patrol, fissures in the ranks form between the insane commander Daskal (George Dzundza) and the idealist driver Koverchenko (Jason Patrick). Tensions biol over when a band of rebels led by the new Khan Taj (Steven Bauer) doggedly pursue the wayward “Beast” and her crew armed with an anti-tank RPG.

Kevin Reynolds certainly had a wild career trajectory. He wrote the screenplay for the now-iconic cold war action fantasy Red Dawn. He wrote and directed what I would call underappreciated Fandango, resurrected the fan-favorite rogue with an American lead for Robin Hood: Prince of Thieves. Returned to write and direct the decent Rapa Nui. Made history at the time for making the most expensive movie ever made with Waterworld and continued to work steadily lending his talents to 187, The Count of Monte Cristo, Tristan + Isolde, and the excellent miniseries Hatfields & McCoys. But in 1988 he directed what I would call his best film with The Beast. This film came and went from theaters virtually unnoticed and only gained something of a following thanks to home video and cable.

Cable was actually how I discovered this film. When you’re a teenager and you see a title like The Beast you assume it’s going to be some sort of silly gory creature feature. As it turns out, it wasn’t. Instead of a bloody monster flick, I saw a bunch of Americans playing Russians on the run from Afghan warriors. It was a little jarring to see the likes of Stephen Baldwin, Don Harvey, Jason Patrick, and George Dzundza playing a Soviet tank crew without even attempting to spittle off a Russian accent or any authentic language dialog. But within a few minutes I was hooked, but also genuinely confused. 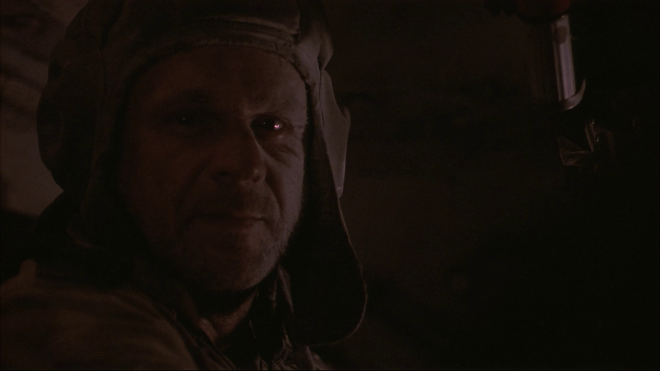 Growing up during the end of the cold war I was passively exposed to the notion the Russians were bad, and thanks to Rambo III their invasion of Afghanistan was a great evil. But then there’s The Beast that’s actually asking the viewer to be empathetic of the soldiers on the ground doing the fighting. Aside from their deranged commander, they didn’t want to be there and just wanted to go home. I’d never seen a war film that actively blurred the lines of good and bad to the point that outside of George Dzundza’s Daskal there isn’t a central figure of evil to root against. Even the idealist Koverchenko could be painted as a bad guy because his fight is with his commander but he’s willing to risk the lives of his innocent crewmembers caught in the middle just to prove a point. That was a lot to take in as a teenager whose main life concern up to that point was who would be playing Wolverine in the long-in-development X-Men movie.

And as jarring as the presentation of the Russian crew may be - it actually works quite well. I point to how well The Hunt For Red October managed a Scottsman playing a Soviet submarine captain, it’d been silly to keep trying to force the language when the cast didn’t have a command of it. I honestly can’t imagine Stephen Baldwin pulling that off. But as a terrified young kid caught in a war where he barely even knew where he was, his Golikov is actually convincing. Based on the play Nanawatai by William Mastrosimone, this film still feels like an intimate character play only set on a massive stage but never loses that important intimacy. This is a work that plays incredibly well on screen but would be amazing in a tight and tiny theater. If you pick up this disc definitely pick through the feature-doc Nanawatai: Inside the Beast. 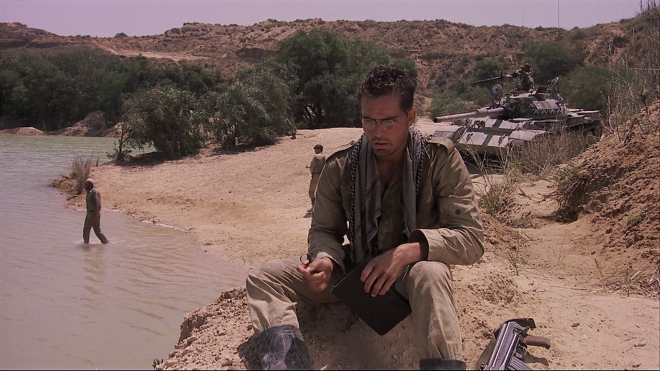 Reynolds pulled some excellent performances from his cast while ensuring tension was always building into an amazing final act. It’s certainly not a one-sided war film. The thing I respect the most about it is it frequently asks the audience to reevaluate the characters in any given situation. One minute you’re supporting one side of the conflict, the next minute you could be flipped. It’s one of the few films that actively examine the gray areas of war and it isn’t always comfortable. The Beast is a hell of a picture and I hope more folks discover it and give it a chance.

Vital Disc Stats: The Blu-ray
The Beast fires off to Blu-ray with a single-disc release from Imprint Films. Pressed on a Region Free BD-50 disc, the disc is housed in a clear case featuring a more modern artwork with a slipcase that thankfully recreates the classic original poster art. The disc loads to a static image main menu with traditional navigation options. 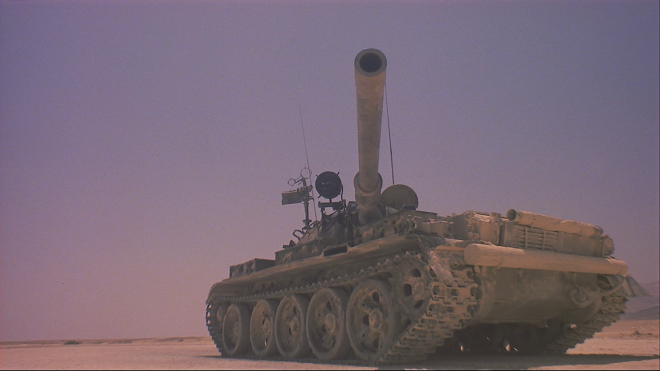 The Beast charges onto disc with a 1.78:1 1080p transfer that is quite clearly sourced from an aged HD master. It’s not terrible, it’s certainly a welcome step up from the old DVDs, but it absolutely would benefit from a new scan and a full restoration effort. On the negative side of things, there’s lots of speckling, nicks, and small scratches. Film grain can fluctuate from quite good to pretty rough. Whenever there’s an optical effect or when someone is speaking Pashto with burned-in subs, the film grain actually looks quite smeary and gauzy. Through all of that, some fine details do manage to surface for facial features, textures in clothing, and the grimy details of the inside of the tank. Colors generally skew towards the deep yellow/browns affecting any source of red or blue in any given scene - but as I remember it this film has always looked that way. As a whole, not the worst, but I was hoping for better. Maybe next time. 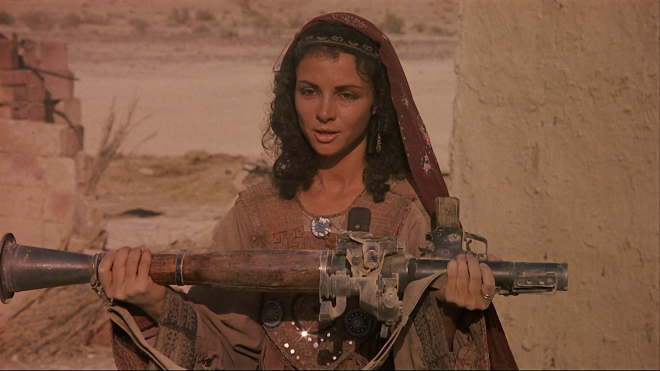 Faring better for this release is the included LPCM 2.0 audio mix. Dialog is clean and clear throughout with the soulful Mark Isham score and active sound effect placement There’s plenty of imaging to the track letting the cramped confined spaces of the tank or the vast open vistas of the desert come to life nicely. When the action picks up there’s plenty of power and oomph to the sounds of gunfire and explosions and cries of terror. All around a solid mix for this film. 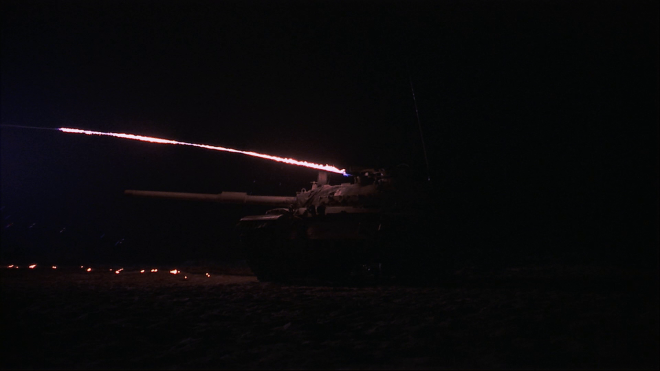 While there may not be a ton of bonus features for this release, what we get here is a fine example of quality over quantity. The David J. Moore audio commentary is well worth a listen providing some informative insights into the film and the production. But best of all is the new feature-length documentary “Nanawatai!: Inside The Beast” from the great team at Ballyhoo that runs over two hours and leaves no stone unturned. There are tons of new cast and crew interviews detailing the development of the film to getting it financed, cast, and shot in Isreal. 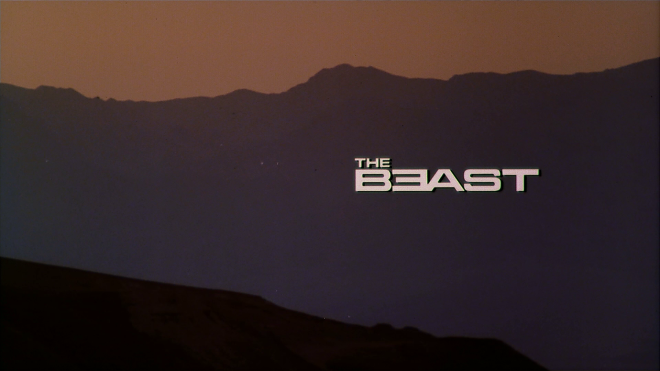 Kevin Reynolds delivered an action-packed but thoughtful view of war with The Beast. With a terrific cast working from a fantastic screenplay, the film is complex and insightful and holds as one of the best action films of the 80s. Thanks to Imprint Films, The Beast comes to Blu-ray. With a dated master, the film certainly would benefit from a fresh scan and restoration effort while the audio holds up nicely and an interesting commentary and an excellent must-see documentary post up the bonus features. While I hoped for better in the A/V department, I’m glad to finally be able to add The Beast to my Blu-ray collection. Recommended