When a man is eaten alive by a mysterious creature in the beautiful Lake Placid area of New England, New York scientist Kelly Scott (Bridget Fonda) arrives to investigate and, examining the evidence, soon confirms that the creature is a giant crocodile. Teaming up with local game warden Jack Wells (Bill Pullman) she uses state-of-the-art equipment to attempt to track down and capture the huge beast. But when they finally encounter their prey, it seems determined to give them a run for their money.

With a wily, underhanded and deliciously dark sense of humor that snaps at audiences like the monster terrorizing the lake of a small town in Maine, 'Lake Placid' is a delightful creature feature with performances that love being a part of the joke. Carefully, almost brilliantly balancing the comedy with a genuine sense of suspense and good action, the horror movie exists right on the edge of laughing at itself, knowingly taking advantage of familiar tropes and pointing them out to viewers before we can comment on them. Although the narrative clearly never takes itself seriously, this is essentially a modernized version of the 1950s & 60s drive-in B-movie, a tongue-in-cheek tale slyly celebrating the campiness of the genre.

Taking a short leave of absence from his usual TV court and medical comedies and dramas, David E. Kelley penned the wicked fable as if scoffing at the need to explain the logic behind characters' actions and of finding a tropical animal swimming in a lake so far north. A few scientific faces try to reason the possibilities by suggesting the creatures can swim across oceans — a wonder of the natural world! — but it's easy to see these attempts are meant to have the story move along and not linger on reality. After all, this is a movie about a 30-foot-long prehistoric beastie claiming the fictional Black Lake as its own personal playground. And the always agreeable Betty White is there with snappy, cheeky sass for anyone taking this too seriously or threatening her motherly treatment of the giant crocodile.

Joining the lovely White is Bridget Fonda as the recently-dumped paleontologist Kelly Scott, who functions as the stereotypical egghead with all the answers. Only, Scott is not particularly fond of Maine's wildlife, she's also completely clueless, and offers very little help other than serving as bait as the screaming damsel in distress. Part of the joke is everyone else asking why a museum would send a scientist of natural history to investigate a tooth when the deaths of officers falls on the jurisdiction of local authorities as well as Fish & Game. The man leading the hunt for the massive lizard is Bill Pullman, whose queries of Fonda's presence are not that far off from our own. The two actors play off each other with believable rapport and good chemistry, but it's Fonda who stands as a city woman taken out of her comfort zone, complaining endlessly and in need of a life change. 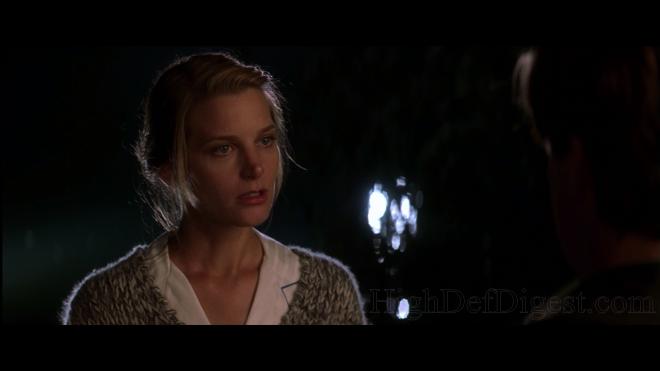 Another great pairing is a bitter Brendan Gleeson and the eccentric Oliver Platt, who like Fonda is a brain but also a bit on the smarmy side and egotistical. As the sour Sheriff Hank Keough, who is never given the respect he deserves, Gleeson is a complete hoot, riling people up and getting under the skin for simply doing his job. Coming across as the American version of Steve Irwin, Platt plays wealthy-playboy crocodile enthusiast Hector Cyr with his usual fulsome, self-absorbed charm which makes him such an enjoyable screen presence. The two men are always at each other's throats with flippant remarks, especially with Platt almost intentionally trying to get a rise out of Gleeson. And still, the best laughs come from White dishing the vulgarity and nastiness to Gleeson's manhood.

Adding to the fun and enjoyment is director Steve Miner, who is arguably best known for the first two sequels in the 'Friday the 13th' franchise, but is no stranger to comedy, as demonstrated in 'Soul Man' and 'House.' For 'Lake Placid,' he wisely takes the "less-is-more" approach, never allowing audiences to have a clear view of the beast until the final half hour, which amazingly works out better than the filmmakers could have hoped for since the CGI has not aged well. This is 'Jaws' in a lake, where the tension and suspense comes entirely from what we don't see, making the few glimpses of Stan Winston Studios' animatronic creature all the more satisfying by film's end. It's a silly concept turned into excellent entertainment because the filmmakers basically take pride in the silliness and absurdity.

Shout! Factory brings 'Lake Placid' to Blu-ray as a Collector's Edition under the distributor's Scream Factory line. The Region A locked, BD50 disc is housed inside a blue, eco-elite case with reversible cover art and cardboard slipcover. At startup, viewers are taken to a menu screen with music and full-motion clips.

The 30-foot crocodile chomps down on Blu-ray with a 1080p/AVC MPEG-4 encode that's hit-or-miss but for the most part strong. While not too terrible or unwatchable, it's still a bit of a disappointment, especially the daylight exteriors. Contrast runs a tad hotter than normal, creating very mild posterization and blooming in the highlights, consequently ruining brightness levels and making the overall picture appear noticeably soft and blurry. Colors suffer as well, looking bland and dull in many areas.

Interestingly, nighttime scenes is where the high-def presentation shines best with rich, penetrating blacks and well-balanced contrast, providing the movie with an appreciable cinematic feel. Primaries are bold and nicely saturated while flesh tones appear health with visible detailing in the faces of the cast. In fact, overall clarity and resolution are a significant improvement with crisp, fine lines in the clothing and surrounding foliage, giving the 2.35:1 image something for fans to enjoy.

While it won't likely make a big splash for audiophiles, the DTS-HD Master Audio soundtrack is nonetheless a good one, nicely complementing the action and story. Rear activity is not particularly aggressive, but various sounds of wildlife are employed with appreciable effectiveness to create a mostly satisfying soundfield. The music of John Ottman makes the most of the upgrade to high-rez audio, bleeding into the surround speakers when appropriate, raising the tension and generating a forbidding soundscape. Imaging is well-balanced and pretty broad with a clean, fairly extensive mid-range that keeps everything sharp and distinct. The low-end is somewhat of a disappointment and generally feels listless with only one or two worthwhile moments of palpable action. With precise and intelligible vocals in the center, the lossless mix is nevertheless fun and amusing.

From what I can recall, the DVD of 'Lake Placid' was a bare-bones release, so asfar I know, all of the supplements are exclusive to this Blu-ray edition.

With a wily, underhanded, and deliciously dark sense of humor that snaps at audiences like the monster terrorizing the lake of a small town in Maine, 'Lake Placid' is a delightful creature feature with performances that love being a part of the joke. From writer David E. Kelley and director Steve Miner, the horror movie carefully, almost brilliantly, balances the comedy with a genuine sense of suspense and action, right on the verge of laughing at itself. The Blu-ray arrives with a strong yet average picture quality but a better audio presentation. Bonus features are light but exclusive to this home video edition, making the overall package worth the price for fans who love this guilty pleasure of horror and comedy.