Vincent Price headlines the ghoulishly delightful adaptation of Edgar Allen Poe classic The Oblong Box. Costarring Christopher Lee and Alister Williamson, this gothic horror story of revenge still packs an entertaining punch. KLSC previously issued this film on Blu-ray in 2015, and now gives fans another chance to add it to their collection. While the transfer source looks very nearly identical, this new disc offers a new encode that greatly improves black levels and bitrates while keeping the same audio mix and bonus features. If you haven't added this to your horror shelf, it's time to make a little space for The Oblong Box - Recommended

When faced with adapting a great work of literature, a writer or a filmmaker must make the difficult adaptation choice of taking the story literally word for word, image for image, or take the original piece of work and use it as inspiration taking the material in an entirely different direction. Both approaches have their drawbacks and disadvantages while also providing some solid cinematic storytelling benefits as well. In the case of 1969's The Oblong Box directed be Gordon Hessler, Edgar Allan Poe's classic tale of an ocean voyage and murder provided a loose adaptation for a frightening and unnerving tale of bloody revenge.

The Oblong Box is the best kind of "Inspired By" type of film adaptation. Beyond a title and a few fleeting moments of plot, the film bares little to no resemblance to the Edgar Alan Poe classic story and is a better movie for it. For one, The Oblong Box while being a fine bit of short story writing and a Poe Classic, it doesn't exactly translate well to film. I love how this film changed setting and scenery and added a lot more dimension to the tale beyond being a claustrophobic ocean story. True, that aspect of the original story could have made for a great film, but somehow I think by adding in a more defined revenge element and some extra characters, it really helped fill this story out into something that is far more cinematic. As other Edgar Allan Poe adaptations have demonstrated, there is plenty of room for interpretation, and while this film may not be literal, I do feel that it captures the story's heart and essence and used those defining elements to create a chilling and effective thriller.

When you start to dig back into some of these back catalog horror movies and see the number of movies that Vincent Price made and then how many of them were adaptations of Edgar Allan Poe stories, it starts to be a bit comical. But then if you were to take a step back and really think about it, who else would you cast in an adaptation of victorian era horror? While some of the adaptations like Roger Corman's The Raven certainly took a more humorous bent to the material, the esteemed Mr. Price gave that adaptation a sense of regal legitimacy. That same sense of regal legitimacy is on full display here as the late great Vincent Price tackles the role of Julian Markham. One thing I've always loved about Vincent Price was his inherent ability at being able to play the role of victim and villain interchangeably and with wonderful subtleness. Sure the man knew how to camp things up when called for, but his best moments in any movie, especially in The Oblong Box, are when he isn't saying anything or being verbose, he just looks at whomever he's speaking to and gives that sideways glance of his that says a lot more than any string of words ever could. While it could be argued that Vincent Price's Julian isn't exactly the main character, he certainly is an anchor figure and holds much of this film together. 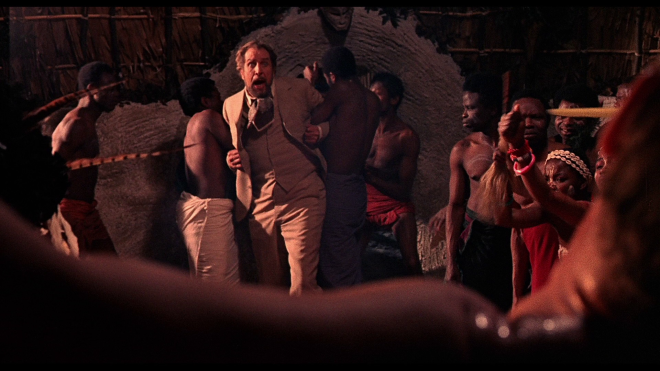 To that effect, you have dubbed Alister Williamson as the mad and disfigured Sir Edward. While it may not be his voice we hear coming from under that frightening red hood, the man gives the role a menacing physicality that makes him look simultaneously aristocratic while also being a figure one should fear. And then we have the red hood itself as the film's McGuffin - just what does Sir Edward look like under that hood? While Edward's murderous tendencies provide enough material to keep the film frightening, it's the idea of how horrible he must look that keeps the viewer hooked. much like The Picture of Dorian Grey - you want to see that face no matter how disgusting or horrible looking!

The Oblong Box may not be the best horror film or the greatest adaptation of Edgar Allan Poe for that matter, but it is one heck of a great little creepy thriller that sadly gets overlooked. One of the things I love about rediscovering old classics such as The Oblong Box is the fun that comes from recovering faint memories and the thrills that hold you to the edge of your seat as well as the surprises that give you a nice jump every now and again. I'd last seen this movie years and years ago when my Dad had checked it out from the library on VHS. I couldn't remember much of the movie itself, but that crimson red hood was still rattling around in the attic of my brain and the film is just as creepy as I remember it being from when I was a kid. Another great classic arrives on Blu-ray and I couldn't be happier. 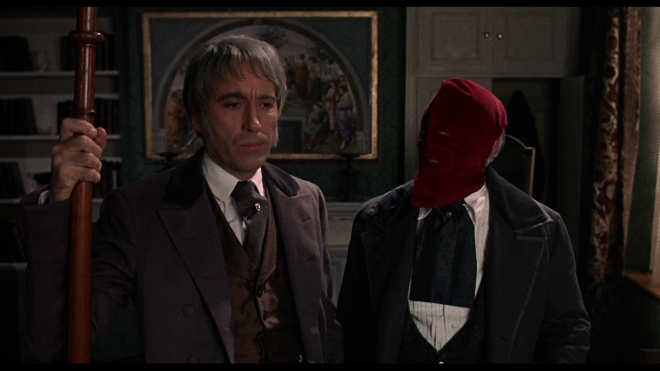 The Blu-ray: Vital Disc Stats
The Oblong Box returns from the grave for a new Blu-ray release from Kino Lorber Studio Classics. Pressed on a Region A BD-50 disc, the disc is housed in a standard case but now comes with a slipcover. The disc loads to an identical static image main menu as the 2015 disc with basic navigation options along the bottom of the menu. This new disc artwork does not include the 20th Century Fox logo - that's the easiest way to tell them apart. 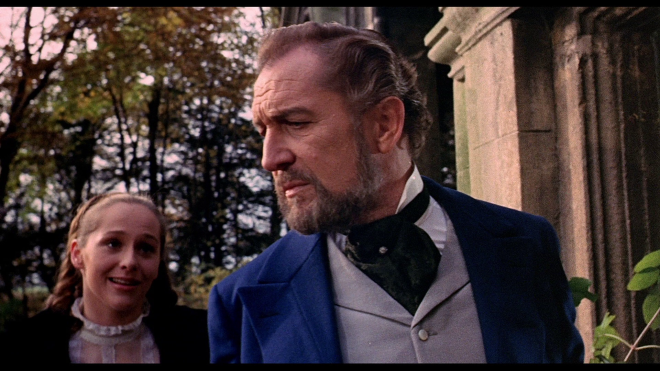 This release of The Oblong Box looks to recycle the same main transfer elements from the 2015 disc, but picks up a new encode. Similar to Twice Told Tales - this release offers up a much healthier bitrate giving the image a more cinematic grain structure. Details are roughly identical with this release picking up only very slight refinements. The most noticeable improvement is in black levels and overall brightness. This presentation runs just a hair darker giving the lighting, colors, shadows, and skin tones a stronger more natural appearance. Not a hugely dramatic difference for much of the film, but in the final climactic moments you can make out cleaner and clearer details in the dark shadowy photography better than you could on the 2015 disc. Not huge improvements, but welcome nonetheless. 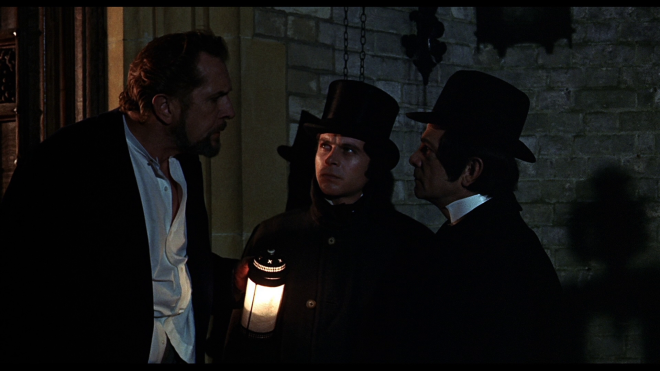 Flipping between discs, the DTS-HD MA 2.0 track is essentially identical to the 2015 disc. I picked through a few choice sequences where Edward was trolling around the pubs or scenes with strong music cues and didn't notice any discernable difference in overall quality. Which is fine. It may not be the end all be all of audio tracks but it's perfectly good for this little gem. 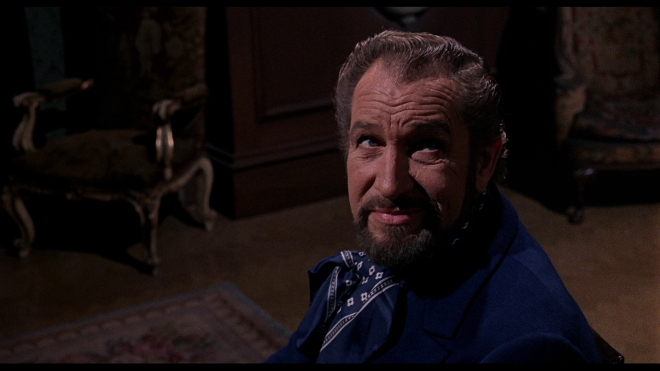 KLSC didn't add much to the stew for this release. All of the primary bonus features from the 2015 release have been carried over. The only thing new to this batch are more trailers from the KLSC gallery of releases. 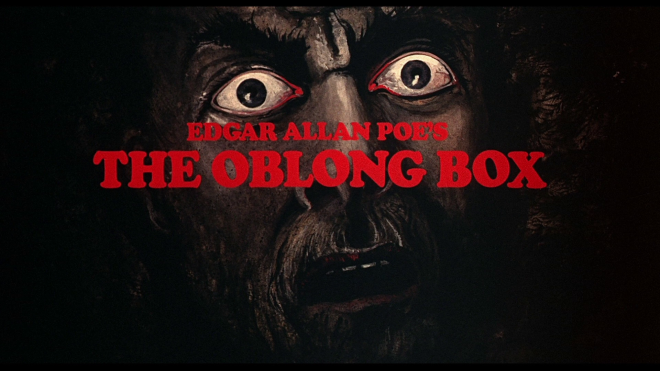 It's not easy to catalog and rank Vincent Price's films as there are so many classics in his archive because he's so good in everything. Even in the bad films, he brought his best game to the show. The Oblong Box is certainly a solid picture playing loose with Edgar Allen Poe's original story to tell a darkly gothic tale of revenge. Just in time for the spooky season, Kino Lorber Studio Classics reissues this gem of a film offering up a slightly improved video transfer while settling for the same solid audio mix and bonus features. If you haven't added this to the collection yet, it's time to dig up The Oblong Box and make some shelf space. Recommended.