Napoleon Dynamite is a new kind of hero, complete with a tight fro, sweet moon boots, and skills that can't be topped. Napoleon spends his days drawing mythical beasts, duking it out with his brother Kip and avoiding his scheming Uncle Rico. When two new friends enter Napoleon's life - shy Deb and mustachioed Pedro - the trio launches a campaign to elect Pedro for class president and make the student body's wildest dreams come true. But if Pedro is to beat stuck-up Summer, Napoleon will have to unleash his secret weapon...

'Napoleon Dynamite' made quite the splash when it premiered 10 years ago at the Sundance Film Festival, with its mix of unremitting quirkiness and the endless stream of harebrained dialogue pouring from the incessantly open mouth of Jon Heder as the titular Napoleon. The movie quickly grew from being an unlikely contender at a film festival to the newest cult sensation, thanks largely to its easily quotable nature and plentiful gags, which were made all the more accessible by the general lack of context required for one person to later publicize what was so appealing about the eccentricities of the Dynamite clan and the rural Idahoans they live amongst.

And, as revisiting co-writer-director Jared Hess' feature film debut reveals,  plenty of jokes still abound, and a clear vision that was maintained throughout the 86-minute runtime.  Any admiration earned by Hess' adherence to said vision, however, is swiftly diluted once the movie reveals itself to be little more than a series of loosely interconnected gags and non sequiturs that fail to form a coherent narrative but rather the director's willingness to throw anything up on screen to see if it would stick. In a way, it's the filmmaking equivalent of a baseball player taking a swing at every pitch; it's less calculated and there's little, if any, finesse involved, but it does the job well enough. And, on the plus side, it improves the odds that, even if it lasts for only a mere second, there's going to be something for just about everyone somewhere in the movie.

Perhaps, then, that is part of the appeal of 'Napoleon Dynamite': That it forgoes a typical narrative for something more like a bizarre, slightly twee vaudeville act, one which, time and again, zeroes in on the gracelessness and unease generated by its eponymous star through his interactions with others in a series of vaguely organized scenes intended to point out the extreme eccentricities of everyone involved. But as the scenes are ostensibly repeated, it becomes difficult to tell who is supposed to be made uncomfortable by the oddball interactions – the characters or the audience. Neither Napoleon nor his brother Kip (Aaron Ruell) seem to have any sense of self-awareness, and their uncle Rico (John Gries) only displays it in the form of nostalgia for his glory days that is so strong he's compelled to purchase a time machine from the Internet. Not only does the product not work, it also causes violent, painful back spasms. 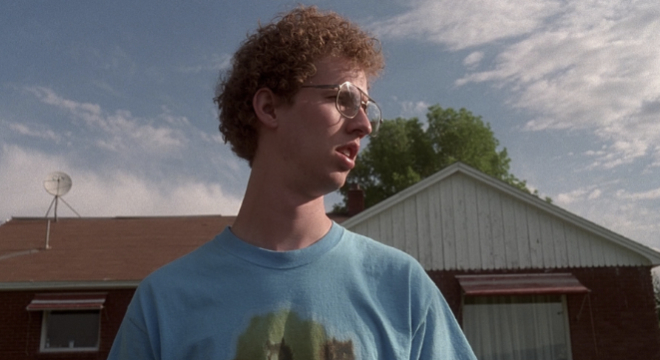 In that sense, it doesn't take long to see that Hess is only interested in doing various takes on the same theme, which is to place one of characters in a ridiculous situation, watch them react, rinse and repeat. As a result, it is almost impossible to become invested in anyone, since their entire existence is confined to a carousel of shame and degradation, and the subsequent abnormal reactions they have to such stimuli. The lack of normalcy, then, is both the primary source of the movie's appeal and the element keeping it from being anything more than an oddity.

'Napoleon Dynamite' does try to mitigate the humiliation of its characters somewhat through the simplicity of their desires – e.g., love and recognition – and by insisting the result of pursuing those wants is actually the production of an endless amount of whimsy. It even goes so far as to hint at a real narrative and purpose by introducing the equally odd Pedro (Efren Ramirez) and his seemingly disastrous run for class president that leads to an inevitable triumph-over-the-bullies-moment meant to afford the film some sort of emotional core.  But the overwhelming sense that everyone is simply operating under the same level of delusion keeps any such emotion from resonating or carrying much significance – which wouldn't be a problem if the movie wasn't so adamant about there being emotion in the first place.

To his credit, though, Hess has at least demonstrated he can maintain a consistency with regard to his particular brand of wistful quirkiness (earned and otherwise) – which was seen again in films like 'Nacho Libre' and 'Gentleman Broncos.' The subsequent lackluster responses to those films suggest that while Hess seems to have a directorial vision that is partially an homage to other filmmakers, his work on 'Napoleon Dynamite' feels more like a mere pastiche than anything else. 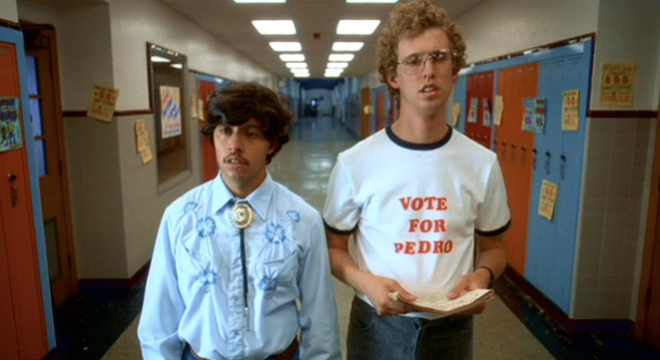 'Napoleon Dynamite: 10 Sweet Years…of Liger Magic, Tots & Great Skills' comes as a 50GB Blu-ray disc + double-sided DVD in a fold out cardboard case, which is housed inside another cardboard slip sleeve. Although the case is intended to showcase the weirdness of the film, its focus on design limits its function, as the discs are held in two rather flimsy pockets on the last segment of the fold out that makes the actual inclusion of something to hold the discs feel like an afterthought.

Presented in a 1080p AVC/MPEG-4 encoded transfer, the '10 Sweet Years' edition doesn't seem to be different from the transfer of the 2009 release. And that's okay, as the image looks quite good despite being a low budget indie film. There is a surprising level of fine detail present in close up, which reveals facial features and textural elements quite well. The depth of the image is also very nice, while contrast levels are fairly high throughout. Colors remain bright and vivid throughout, which adds to the general whimsical atmosphere of the film and actually enhances the somewhat static cinematography. The image seems to be free from grain, though there is some that actually lends a nice filmic quality to the overall picture.

Because of its source, 'Napoleon Dynamite' was likely never going to look amazing, but this edition still manages to impress by highlighting the film's visual strengths and offering a surprising amount of fine detail to boot.

The DTS-HD Master Audio 5.1 sounds quite good throughout. Like many indie films of this nature, 'Napoleon Dynamite' includes a soundtrack that is quite reliant on pop music cues to make transitions and to set the tone. In that regard, the music sounds terrific, with a nice extension between all channels and some subtle LFE to enhance depth. Dialogue, too, is handled well and made to sound as strong and clear as possible. Atmospheric elements are less impressive, as they are intermittent in the film, which seems to be as deliberately flat in terms of its sound as it is with certain aspects of its visual style. In that regard, moments like an auditorium erupting with applause tend to sound great, while a bike ride through a neighborhood is a touch anemic.

Still, despite the lack of depth and immersive elements in some places, the mix here presents strong elements when it needs to most.

Outtakes, Deleted Scenes  & Audio Commentary by co-writer/director Jared Hess, producer Jeremy Coon and star Jon Heder – This is a rather lively commentary that seems to be the same one recorded for the aforementioned 2009 Blu-ray.

Cast Commentary by Aaron Ruell, Efren Ramirez, Jon Gries, and Tina Majorino – Again, an entertaining commentary, but it is the same one from the previous release.

World Premiere Jared Hess (SD, 43 min.) – This is a fairly interesting look at the director on the night 'Napoleon Dynamite' premiered at Sundance.

On Location: Napoleon Dynamite (SD, 42 min.) – This is just a lengthy collection of behind-the-scenes footage that will be of interest to fans of the film.

Napoleon Sightings (HD, 19 min.) – A collection of Jon Heder appearing in character to promote the film.

'Napoleon Dynamite' doesn't seem like it should be that divisive of a film, as the film's PG rating suggests a rather tame yet quirky outing. Still, the film itself is little more than a one-note joke set to repeat for nearly 90 minutes. That's not to say the film is devoid of laughs, as it's hard to deny the zaniness of the Dynamite clan and their bizarre environment. But too many of those laughs come at the expense of the characters in question, which undercuts the supposed sweetness of the denouement. The image is fine, as is the sound, but as far as extras go, it seems like this edition is lacking in new content.

Sale Price 6.93
List Price 14.99
Buy Now
3rd Party 6.88
In Stock.
See what people are saying about this story or others
See Comments in Forum
Previous Next
Pre-Orders
Tomorrow's latest releases