It has been hailed as "tense" (Hollywood Reporter), "chilling" (Cinetalk), and "unnerving" (Exclaim) "terrifying" (GQ). Now experience the ride that has been "scaring the living sh*t out of people" (IndieWire) worldwide: Young couple Tom (Iain De Caestecker of "Agents of S.H.I.E.L.D.") and Lucy (Alice Englert of BEAUTIFUL CREATURES) on one of their first dates are driving to a festival in the remote Irish countryside. But when they leave the main road to look for their hotel, they will quickly become hopelessly lost. Now the night is coming. The fear is growing. And they are not alone. Allen Leech ("Downton Abbey") co-stars in this shattering debut feature by writer/director Jeremy Lovering that HorrorCultFilms.co calls "real, ferocious and terrifying".one of the best horror flicks of the year!" and Electric Shadows warns - "See it. Just don't see it alone".

More of a cautionary tale for young men in still-budding relationships than the psychological horror its filmmakers intend it to be, 'In Fear' follows a fledgling couple on a romantic getaway that suddenly takes a dark turn. Their one-night destination is the Kilairney House Hotel, a remote, heavily-secluded inn hidden deep in the Irish countryside and only accessible by driving through a series of winding, nameless roads. After a while, viewers, along with the two protagonists, grow suspicious of the hotel and whether it is still in operation. While literally driving in circles and unable to find the main road, much like the audience will feel in the first half of a brisk 85-minute runtime that plods along in a search of conclusion that makes sense, those brave enough to sit through this are made witness to the collapse of young love. Even if the new couple can survive the night and make it home, can the relationship survive the experience?

If one aspect of this British production was of most interesting — well, other than the admittedly intriguing premise — it is arguably the unhurried, measured demise of a very new couple where each learns about the other under pressure rather quickly. Of course, this is not the film's central theme; that comes later in the presence of a masked psycho terrorizing the two lovebirds while feeling lost, both literally and figuratively. Still, it makes for a decently compelling watch as Tom (Iain De Caestecker) and Lucy (Alice Englert) find themselves trapped in a seemingly escapable situation, and the crazed maniac haunting the forest serves as the impetus for reconsidering their decision to travel with a stranger they only met two weeks earlier. Tom struggles to impress while appearing confident behind the wheel, and Lucy works at trusting him while keeping cool rather an angrily distressed or screaming at the top of her lungs. 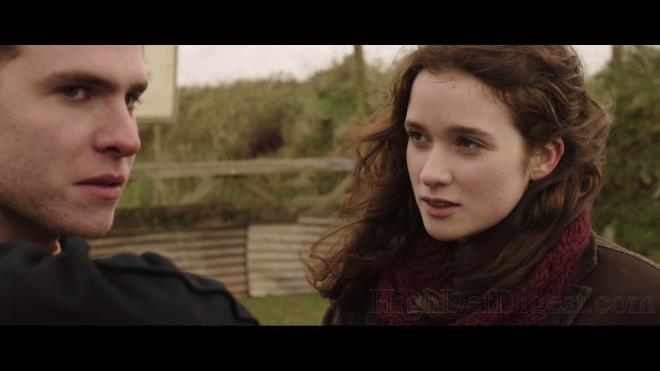 The strain and stress of finding an exit weighs down on these two kids as the story progresses, their romance slowly unraveling and disintegrating to uncomfortable animosity. Adding to their turmoil and cynical desire to go home is a weirdo that pops up in and out the pitch-black darkness, which turns the movie into a fairly frightful experience. Although there are several moments of spookiness and effective scares, it's not quite as absorbing as Tom and Lucy's conversations and one-word, off-handed comments increasing into disparaging remarks that leave us wondering if the two might suddenly turn on one another. Frankly, that probably would have made for a better movie than what we're given here. Once the killer (Allen Leech) is revealed, suspense is thrown out the window and left on the side of the road like rotting roadkill. There's really nothing left to do but watch as the couple is toyed with purely for the killer's twisted amusement.

As if blending the cat-and-mouse chase terror of 'The Hills Have Eyes' and 'Deliverance' with 'Eden Lake' and 'The Hitcher,' 'In Fear' starts strong with a seemingly engaging idea of young love challenged but soon devolves into relatively familiar territory. Making his feature-length debut after two decades of made-for-television movies and documentaries, writer and director Jeremy Lovering directs with confidence and style, turning the cramped space of the car into a maddeningly claustrophobic experience. Even when granting the pair a couple moments to stretch their legs, the suffocating sense of a confined space continues with a dense forest that doesn't allow much visibility beyond a few meters and the roads are made narrow with overgrown foliage. But again, the film's strength is more on how this environment and the stress of feeling lost affects the young couple while a psychopath's perverse game does little to instill fear.

Anchor Bay Entertainment brings 'In Fear' to Blu-ray on a Region A locked, BD25 disc inside a blue, eco-cutout case. After a few skippable trailers, it switches to a menu screen with full-motion clips and music.

The backwoods horror flick terrorizes Blu-ray with a generally pleasing 1080p/AVC MPEG-4 encode that won't likely make any waves, much like the film itself, but viewers probably won't find much to complain about. Filmed with the help of a few different HD cameras, the video comes with a sterile digital appearance, which is to be expected, while most of the entire presentation is drab and dreary, which may or may not be intentional.

In either case, the high-def transfer shows excellent definition and resolution during the well-lit segments, but since a majority of the movie takes place in the pitch-darkness of the night, the picture is noticeably soft and blurry throughout. Speaking of the dark, black levels are waver quite often from true and penetrating to dull and murky gray, making much of the video fairly flat and two-dimensional. Contrast is slightly below average, adding to the possibly deliberate dreary effect, and colors generally lack energy and boldness, though primaries are cleanly rendered.

Things improve quite a bit in the audio department with a mostly satisfying Dolby TrueHD soundtrack that nicely generates an air of apprehension but fails to maintain that atmosphere consistently. Rear activity creates a spooky soundfield with various sounds of trees and branches cracking overhead while leaves rustle in the wind, and the rain pours all around. Sadly, there are several sequences where the surrounds suddenly go silent while in the outdoors, which is somewhat disappointing. The front soundstage does much of the work with a decently wide presentation, exhibiting good channel separation, a clean, sharp mid-range and intelligible vocals in the center. Most impressive is a commanding and powerful low-end that often surprises with a few choices moments of deep, rumbles bass that fills the room feel creepiness (bass chart).

More of a cautionary tale for young men in still-budding relationships than the psychological horror its filmmakers intend it to be, 'In Fear' follows a fledgling couple on a romantic getaway that suddenly takes a dark turn. Unfortunately, the film's strength is in witnessing the stress affecting the young couple, but a psychopath's perverse game does little to instill fear. The Blu-ray arrives with middle-of-the-road picture quality and a very good audio presentation, but with only one throwaway supplement, the overall package makes for a decent rental at best.

Sale Price 7.79
List Price 17.99
Buy Now
3rd Party 39.99
In Stock.
See what people are saying about this story or others
See Comments in Forum
Previous Next
Pre-Orders
Tomorrow's latest releases