A psychotic mother (Sheila Keith) and her equally unbalanced daughter become involved in a sinister branch of DIY, as they attempt to help remove pressure of the skull on the brain by drilling into the cranium of their hapless victims.

In the entire canon of Pete Walker's short-lived career as director of sexploitation and horror schlock, 'Frightmare' arguably stands as his magnum opus, the one film he should hopefully be best remembered for. A depraved, shameless and morally bankrupt depiction of the modern British family, the low-budget feature displays Walker's unique style, competent and plain but also distinctive and almost surreal, mixed with a very quiet twisted sense of humor. Unlike his other movies, the plot for this warped and bizarre tale of the dysfunctional family has a certain level of maturity, effectively delivering the chills with concerns on mental health, childhood trauma and a sibling rivalry than can turn homicidal.

Part of its charm comes from the way the story commences, a mostly silent, wordless assortment of pictures of what seems to be an abandoned, near-derelict carnival. With commendable photography by Peter Jessop, the entire sequence, showing unattended tents and a rather melancholic carousel, is shot in black and white, creating a mournful feel of forgotten childhood memories. Then, an unnamed man appears walking amid this forlorn site — again, in silence except for the subtle sound of wind — to a caravan where he inquires about having his fortune read. Suddenly, and unexpectedly, the man is dead with half his face a bludgeon, bloody pulp. Growing gloomier still is a scene with a surly judge making it known this is the most heinous crime of his career, sentencing a married couple to a mental institution.

What this does, and does it quite amusingly well, is set up Walker's story, which he co-wrote with long-time collaborator and well-known film critic David McGillivray, as a sort of urban legend, a mysteriously spooky myth of the recent past that continues to haunt the present. Suddenly flashing forward almost twenty years later, that simple, expressive opening evolves as the narrative progresses into the proverbial dictum where children inherit the sins of the parents. The couple are declared sane and released from the psychiatric hospital, supposedly living a quiet life in an isolated Surrey farmhouse. Not soon after, unfortunately, Dorothy (Sheila Keith) is back to her old habits of luring lonely people into her home for a tarot card reading and indulging in some forbidden pleasures. Edmund (Rupert Davies), as the dutiful husband, works in obedient diligence to cover up his wife's horrendous acts of violence. 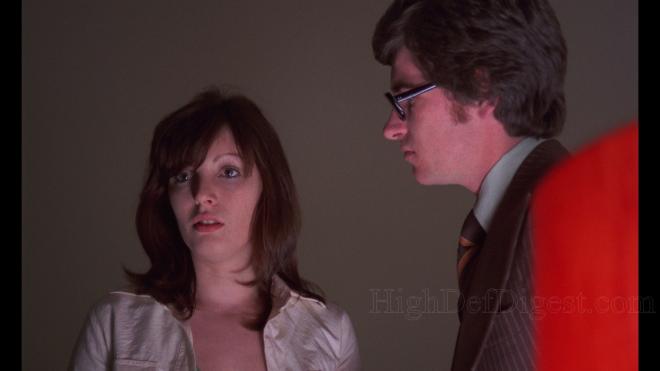 Without a doubt the highlights are in seeing the lovely Sheila Keith, television actress who appears in several of Walker's films, disturbing transformation from gentle, meek old lady to a raving, bloodthirsty maniac. And boy is she a frightfully scary sight, which Keith notably takes sheer delight in, even when blood splatters across her face while drilling into a corpse. However, this wonderfully entertaining creepshow only gets better with the introduction of two endlessly-bickering sisters, Jackie (Deborah Fairfax) and Debbie (Kim Butcher). Jackie is the older of the two wanting trying to maintain appearances and keep her family's past secret from her psychiatrist boyfriend Graham (Paul Greenwood). Debbie, on the other hand, is a manipulative, unruly delinquent looking for approval with a savage mean streak that appalls her boyfriend Alec (Edward Kalinski).

It's easy to guess how these family problems will all come to a head, though various plot details do excellent in keeping audiences on their toes, but the fun of Pete Walker's 'Frightmare' is the journey to that point. With creepily fantastic camerawork by Jessop, Walker sustains an air of eeriness and a sense of the ominously sinister. One scene has Jackie battling a terrifying vision of her mother on a train with a package of meat in hand, and another great moment demonstrates Keith's talent after killing a poor woman looking to be comforted by the tarot cards. She goes from hurried lunatic talking as if someone were helping her to benign, guilty woman quickly wording apologies. Through all this, Walker frames each scene marvelously to be as effectively disturbing as possible, making this not only his best work but also a genuinely admirable cult horror classic.

Kino Lorber brings Pete Walker's 'Frightmare' to Blu-ray under the distributor's "Redemption" label. Housed inside a normal blue keepcase, the Region A locked, BD50 disc goes straight to a static menu screen with music playing in the background.

Family trauma extends to Blu-ray with a shockingly good and mostly excellent 1080p/AVC MPEG-4 encode that will astound long-time fans. Showing that the source used for this high-def transfer remains in superb condition, this is hands-down the very best home video presentation of the movie, a massive improvement over previous editions. Of course, the 1.66:1 image comes with the usual sporadic splatter of white specks and dirt, but on the whole, fine lines and objects are sharply detailed with revealing, healthy facial complexions. Primaries are vivid and animated while secondary hues are full-bodied, providing a great deal of warmth. Contrast and brightness levels are very well-balanced with clean, crisp whites, deep, rich blacks and strong shadow delineation.

Although not terrible or deficient in any particular way, the uncompressed PCM mono soundtrack is nevertheless not quite as impressive as the video. It gets the job done, for sure, as dialogue reproduction is precise and well-prioritized in the center, providing the soundstage with weight and presence. Overall, the lossless mix is clean without the slightest hint of distortion or noise. However, a few conversations reveal a bit of hissing in voices. Imaging is stable and a tad wide when Stanley Myers's music plays, but background activity also feels somewhat narrow and limited to the center. Dynamic range is even and uniform, making the presentation seem flat, and there is really no bass to speak of.

A depraved, shameless and morally bankrupt depiction of the modern British family, Pete Walker's 'Frightmare' is arguably the best horror picture from his short-lived career of low-budget exploitation filmmaking. With a superb and memorable performance from the lovely Sheila Keith, Walker creates a marvelously creepy and effectively disturbing tale. The film arrives on Blu-ray with surprisingly good video and an audio presentation that is for most part pleasing. Though the package only comes with a small assortment of supplements, cult enthusiasts will be proud to have it in their collection.