Donnie Yen takes on the role of Zilong Chen, an undercover police officer deep within the ranks of one of China's most ruthless underworld gangs. The leader of the gang, Xiong (Chou, Jet Li's Fearless, The Forbidden Kingdom), has made it his priority to weed out the government infiltrators in his midst. Struggling to keep his family together and his identity concealed, Chen is torn between two worlds. Upping the stakes, as Chen's undercover comrades are being dealt with, one by one, Chen fears his days are numbered. Now, he must risk everything to take down the organization and reclaim the life he lost when he took on this perilous assignment. As the action mounts, Chen must do everything he can to protect the Special Identity he wishes he never had before it's too late.

Story isn't necessarily the main component driving most martial arts films. As part of the subgenre's structure, the idea of narrative is really the vehicle through which the hero is forced to test his or her fighting skills against worthy – or as is often the case many, many unworthy – opponents. That is certainly true of the new Donnie Yen actioner 'Special ID,' which runs like a well-oiled machine in terms of finding ways to put its star in the mix of some fantastically choreographed and viscerally engaging fight sequences, but when the story in question is actually analyzed, the many ins and outs of this deep-cover cop story become far too convoluted for its own good.

And, in a way, that actually works to the film's advantage, as 'Special ID' walks a fine line between being a hardened cop thriller, and a gloriously dumb exercise in police and action movie clichés. Ever since 'Infernal Affairs' made it big, spawning sequels and the Academy Award-winning American re-make, 'The Departed,' it has begun to feel like every crime/action director and every action star is looking to take the deep-cover-cop-looking-for-a-way-out formula and milk it for all it's worth. Well, for what's its worth here is a fun and engaging premise where Donnie Yen is Detective Chen Zilong – better known to the criminals in Hong Kong as "Dragon" Chen –  an enforcer with a reputation for knocking heads with great efficacy.

As has become the common thread in several of these undercover films, Chen has never really been able to be a cop; he was basically undercover from the get-go, and now, the life of crime has taken its toll on him, and Chen wants out. Naturally, Chen's superior, the one who convinced him to go undercover all those years ago, needs him to complete one more mission before he'll finally take his operative out of the field, and behind and honest to goodness badge. Chen's job is to head to the mainland and insert himself into an explosive war erupting within the ranks of the Triad, a war started by Sunny (Andy On), a former protégé of Chen's. This means Chen is working with a new partner, the smart, feisty, and by-the-book Det. Fang Jin (Tian Jing), who is no fan of Dragon's unorthodox and violent style of police work. 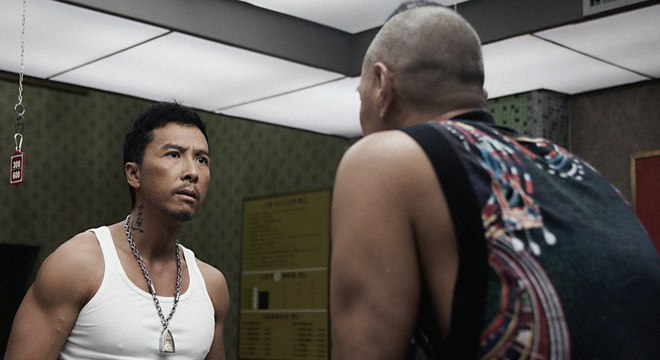 What is essentially a linear story about Chen literally fighting his way out of an undercover assignment that has gone on for far too long is essentially hobbled by the fact that everyone but Sunny and some dimwitted gangsters know that Chen is actually a cop. Even Chen's mother Amy (Hee Ching Paw) knows her son is not who he says he is. For what it's worth 'Special ID' attempts to make use of Chen's identity to comment on the character's increasing level of maturation throughout the story. Oddly, the film is, in essence, a coming of age story, painting Det. Chen as something of an epically late bloomer, still attached to his mother's apron strings, despite his proficiency in beating the hell out of people with style.

Although the undercover portion of the story line essentially lacks the requisite level of tension that element typically deserves, director Clarence Fox Yiu-Leung attempts to wring some excitement from the Battle of the Underworld Bros subplot going on between Chen and Sunny. In that regard, Andy On brings an interesting dynamic to the film that would have otherwise relied solely upon the opposites attract sexual tension of Chen and Jing, and, more likely, the charisma of Yen himself. Early on, there is a great sequence were Chen and Sunny playfully-yet-competitively battle it out in a restaurant before things get incredibly serious. The aspect of brotherhood between the two undercuts a great deal of the tension until Sunny has no choice but to call for Chen's head.

This introduces the film's most exciting action sequence, which has echoes of the 'Oldboy' hallway fight, in which one man does battle against many in a claustrophobic environment. Naturally, Yen's innate showmanship and his prodigious athleticism create a compelling mixture of theatricality and brutal realism (many of takes reveal a certain level of controlled contact that makes the hits resonate in an incredibly dynamic way) that creates an interesting and rather violent tonal shift in a film that has a tendency to drift and become unnervingly lighthearted and unnecessarily sentimental at times.

Perhaps unsurprisingly, it is the fast and furious martial arts action that grounds 'Special ID' and keeps it from losing sight of what its storytelling objectives really are. While the film keeps things going from action sequence to action sequence, there are times when the plot and the writing bites off a little more than it can adequately chew, resulting in a near-stoppage of the film's flow. While Det. Jing brings a much-needed feminine balance to an otherwise all-male arena, her actual contributions to the film are largely limited to handling throwaway characters and berating Chen for his irresponsible ways. Still, what the film lacks in compelling side characters or completely rounded characterizations of its primary cast, it more than makes up for with its willingness to invest in lengthy, engaging action set pieces, the last of which involves a harrowing car chase and some product placement for Volvo and Range Rover that Jeremy Clarkson would approve of.

In the end, 'Special ID' will be an entertaining ride for martial arts and Donnie Yen fans alike (are the two ever exclusive?), giving them plenty of what they're looking for in an action movie that, like its protagonist, has lofty ambitions beyond its very specific skill set that it doesn't necessarily reach, but you admire them both for trying. 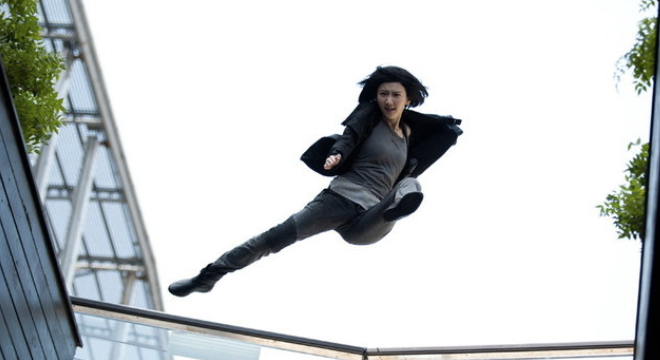 'Special ID' comes from Well Go USA Entertainment as a single 50GB Blu-ray disc. The film will auto play several previews from upcoming releases, but they can all be skipped to head directly to the top menu.

The 1080p AVC/MPEG-4 encoded transfer for 'Special ID' is an incredibly clear, detailed endeavor that highlights the film's action sequences as well as it does the slower moments of exposition. The image is richly detailed from start to finish, delivering equally stunning views in a wide variety of settings, from the fluorescent-lighted dinginess of an illegal gambling establishment, to the rain-soaked streets of a busy, neon-infused downtown, to a sunny, mid-day brawl atop an unfinished stretch of freeway. The level of detail adds to the brutality of the fight sequences, as little details like wallets flying out of jacket pockets and clothing getting ripped are presented clearly and consistently. Colors are bright and vibrant, adding to the effect of the aforementioned downtown sequence. Meanwhile, contrast is consistently high, creating full-bodied blacks that enhance nighttime scenes without stealing any detail. This also helps produce clear and bright daytime elements that don't look too hot or washed out.

Overall, this is a stellar looking image that gives the visceral excitement of the film an edge against other entries in the martial arts arena.

The Chinese DTS-HD Master Audio 5.1 mix is strong if not stellar throughout. The mix presents the dialogue clearly, and affords plenty of room for sound effects and music to add some depth to the proceedings without the various elements overwhelming one another. Sound effects favor the front right and left speakers, though there is a nice atmospheric element that is delivered through the rear channels. Mostly, this generates a deeper sensation of Det. Chen being overwhelmed by combatants, as the busy restaurant sequence makes the best use of the mix. Still, several other scenes manage to use the immersive qualities of the sound to good effect, too, but, like the freeway sequence that ends the film, they can sometimes become overwhelmed with the emphasis on LFE and score.

This is a strong mix that delivers plenty of what action buffs crave, even if it over does it on a few occasions.

Making of (HD, 4 min.) – This is your standard Making of featurette. Not much here, but some behind-the-scene footage and a few interviews.

'Special ID' is another solid entry from Donnie Yen. It is a film that manages to show off both his skill as a martial artist and choreographer, as well as his charisma as a leading man. Although the film could have had more well rounded characters, the fact that it even tried to add something more diverse to the typical undercover cop routine is enough to give the lack of truly dynamic characters a small pass. The film is viscerally entertaining (incredibly silly in some places, but entertaining) and the disc comes with great picture, very good sound, which helps to make up for the lack of extras. This one is worth a look.