The lovable scamps Kyle, Kenny, Stan, and the adorable Cartman return in another two-part special in South Park Post Covid and The Return of Covid. As the world gets back to “normal” after the pandemic, the now-grown friends will have to solve the mystery of how their dear friend Kenny finally died. The two-parter special comes home to Blu-ray from Paramount in a single-disc release with solid A/V but no bonus features. Recommended.

Covid is finally over… almost. Things are actually getting back to normal… sort of. As the pandemic raged on for decades, Stan, Kyle, Kenny, and Cartman grew apart. Stan became an “online whisky consultant.” Kyle is doing his own thing. Kenny became a world-famous scientist. And Cartman became a Rabbi married to a beautiful woman named Yentl. A disagreement tore the friends apart decades ago, but when Kenny turns up dead, the friends will have to come together to figure out how he died and potentially change the course of human history! 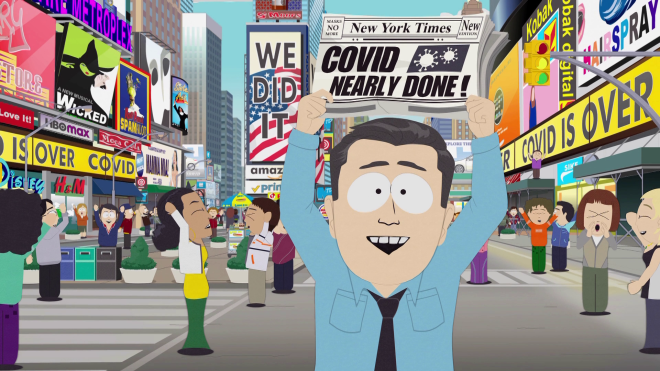 South Park hasn’t been one to ever shy away from touchy subjects often taking pretty pointed stabs at highly politicized topics. Did anyone think that their two specials Post Covid and The Return of Covid would be any different? After their “24th” season - which was just The South Park Pandemic Special and South ParQ Vaccination Special, Matt Stone and Trey Parker settled into the rhythm of delivering multi-part long-form stories and they hit some great notes. When the world really needed a few good jokes about the pandemic and the ludicrous conspiracy theories about the vaccines, they delivered two genuinely funny specials. And for the most part, that track continues with these two outings. 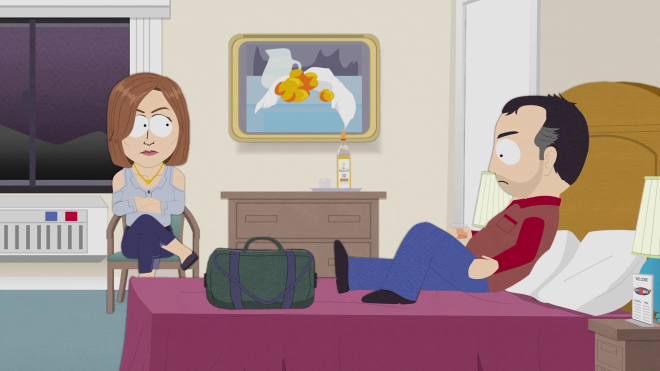 Post Covid is a funny little piece but it’s probably the weakest of the pair. While it’s hilarious to see the boys in their older adult forms, the satire of the future is pretty stale. While it’s funny seeing Stan arguing with “Alexa,” most of the future tropes are just tired Blade Runner references. The cultural satire just isn’t sharp because they had to take things to such an extreme that it just wasn’t funny. Thankfully with The Return of Covid the satire is much sharper and sillier complete with a grown Butters trying to shill NFTs onto his friends while Randy cultivates the last surviving plant of the Covid Special.

Stacked up compared to some of their past specials or the most recent 25th Season, I’d have to say these two were entertaining, but just not as sharp. It has to be a pretty terrifically terrible episode for South Park to be unwatchable. Post Covid and The Return of Covid may not be their best efforts but there are still plenty of great gags to sustain the two-hour run. 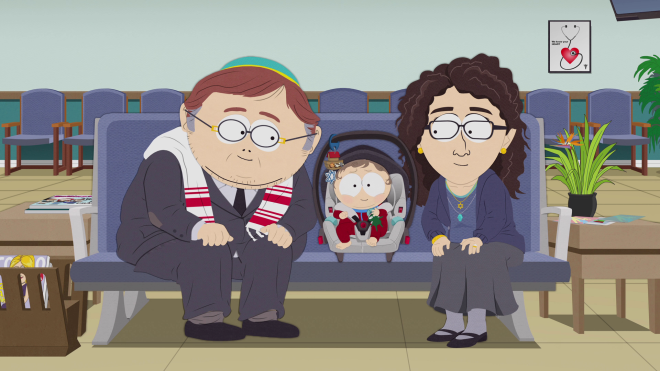 Vital Disc Stats: The Blu-ray
South Park Post Covid and The Return of Covid infect your home video collection with a new single-disc Blu-ray release from Paramount. Pressed on a BD-25 disc, the disc is housed in a standard study case and loads to a static image main menu letting you choose between the two specials. 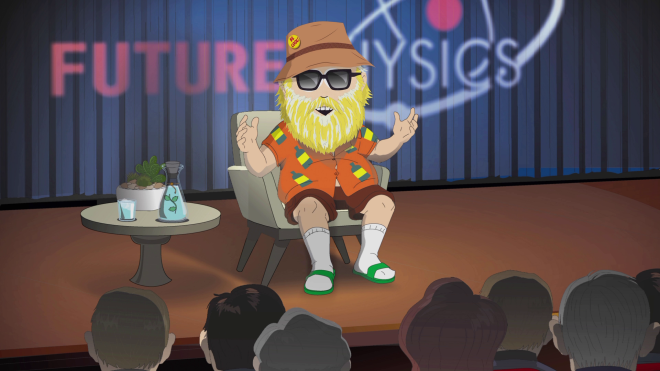 While the series gets older, it doesn’t really change all that much season to season. And so, this South Park two-parter special keeps the pace with past seasons on Blu-ray. The animation style maintains that flat 2-D cardboard appearance while giving the image some three-dimensional flourishes. Details are what they are - either impressive with rich textures or purposefully flat. Colors are bright and bold with brilliant primaries. 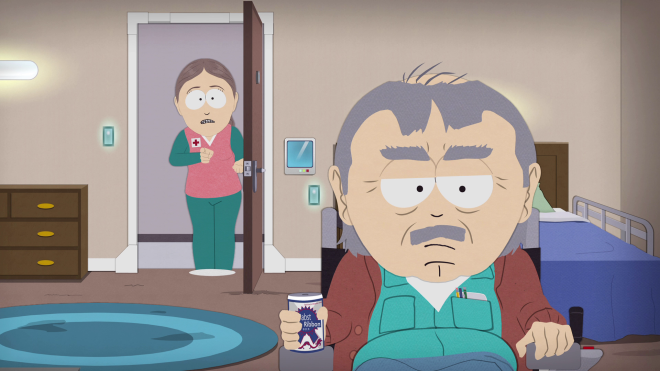 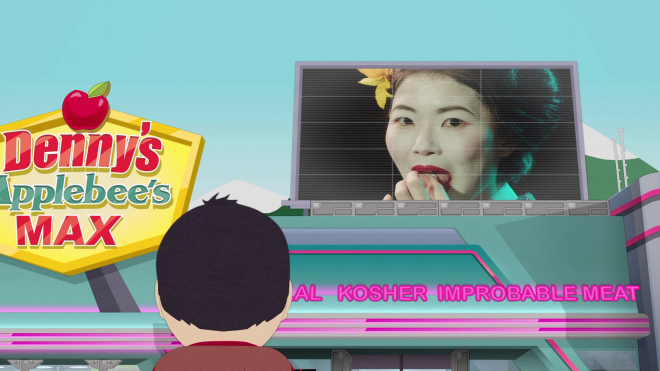 Each special again comes with a Dolby TrueHD 5.1 audio track and they’re fairly active and engaging. Dialog and jokes are clean and clear. Scoring is nicely accented for dramatic, comedic, or dramatically comedic effects. Overall the soundscape largely keeps to the front/center channels but some of the bigger scenes like shots of Future South Park that look and sound right out of Blade Runner uses the open spaces nicely to push more activity into the surround channels. Clean without issue, it’s pretty standard for any given outing on South Park. 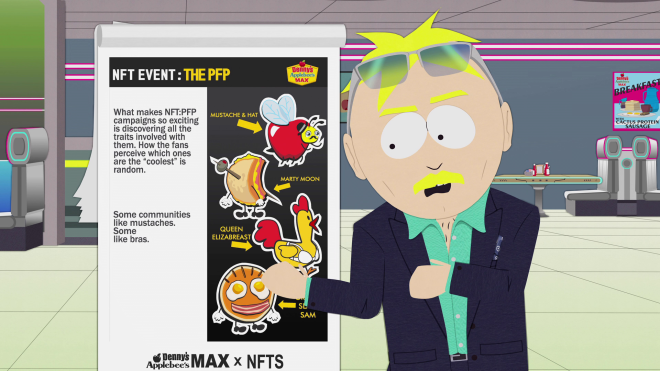 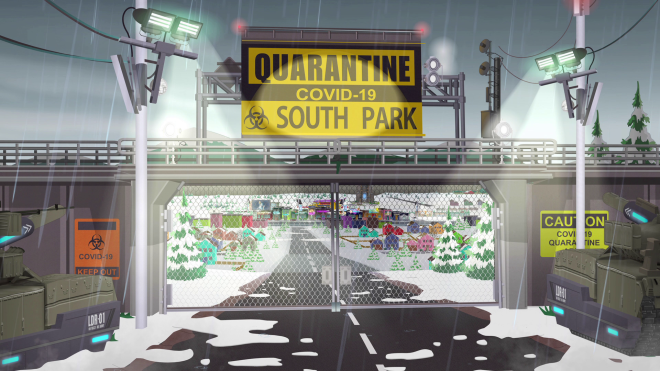 For how long South Park has been running, it’s amazing that Matt Stone and Trey Parker manage to keep finding something funny and relevant to lambast. Some episodes are amazing, some not so, but the show has managed to beat the odds and stay funny. While a middling set of specials South Park Post Covid and The Return of Covid were ultimately funny adventures. Uneven for sure, but the best gags hit right where it counts most. Now on Blu-ray, these two specials look and sound on par with all of the most recent South Park on Blu-ray disc offerings with clean and easy A/V for both pieces. If you’re a fan of the series and have been keeping up with the Blu-ray releases for your collection - Recommended