Buckle up for the wildest road trip of the year! Cedric the Entertainer leads an all-star cast in this hilarious comedy adventure about a misfit family trying to survive outrageous obstacles (including each other) on a cross-country trek to their annual family reunion. Along the way, they battle a psycho truck driver, pick up a voodoo-loving hitchhiker and "expose" the dangers of hot-tubbing in a strange hotel. Co-starring Vanessa Williams, Bow Wow, Shannon Elizabeth and Steve Harvey, Johnson Family Vacation is packed with laughs and fueled by fun!

Unless your last name is Griswold, chances are that finding a captive audience for your vacation story is going to be something of an uphill climb. And that's no dig on the titular family of 'Johnson Family Vacation,' they seem like lovely people; it is just that mounds and mounds of empirical evidence has been collected over the years telling the world that whatever wacky adventures someone got into on their vacation are of little or no interest to the rest of the population. Don't let all those Facebook and Instagram likes of your picture with the world's largest ball of twine fool you; a cursory glimpse of how you spent your vacation is all anyone needs. The "like" button is a largely arbitrary offshoot of a largely arbitrary enterprise (privacy invasion aside), but it does serve one important function: It is insurance to guard against the regaling of family, friends, and co-workers with the excruciating minutia of your last trip.

As such, it's hard to get too invested in Cedric the Entertainer's 2004 vacation comedy. For one, there's just too much of it that's reminiscent of another vacation franchise that (post-'Christmas Vacation' sequels notwithstanding) set a pretty high bar for any competing story. Secondly, there's just not enough funny in any of the titular family's interstate adventures to make it stand out as much of anything, much less a worthy successor to the throne of the improbable vacation comedy subgenre.

There's a simple set-up to 'Johnson Family Vacation' that's muddied by unnecessarily complicated relationships built around rather thin characterizations. As the patriarch Nate Johnson, Cedric the Entertainer takes on the role of all things funny. And while he does an admirable job of dishing out laughs, his efforts have the odd effect of ultimately making him indistinct. He is simultaneously oblivious and all seeing – basically whatever the scene in particular calls for. Nate's marriage to his wife Dorothy (Vanessa Williams) has crumbled to the degree that they live in separate houses down the street from one another, with their three kids Nikki (Solange Knowles), D.J. (Shad Moss – otherwise known as Bow Wow), and Destiny (Gabby Soleil) seemingly commuting between them. 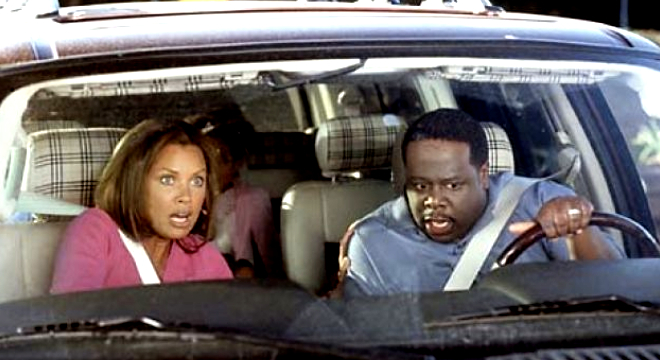 And while there is supposed to be (or one would assume there would be) some level of conflict between Nate and Dorothy, the film never really explains why – it, like a lot of things in this movie, just is. For example, the family reunion Nate's dragging his family to, so they can spend time with his mother and his overly competitive brother Mack (Steve Harvey) is little more than a plot contrivance intended to get the family on the road. There's little hint of what Nate wants or why he feels compelled to travel a thousand miles in a Lincoln Navigator he didn't want in the first place (a scene that smacks so completely of Chevy Chase and Eugene Levy in the opening moments of 'National Lampoon's Vacation' it's as though the Johnson's are trying to keep up with the Griswolds). Therefore, the lack of clear motivation establishes a disengaged tone that continues throughout the film.

To its credit, the overwhelming sense that the writers never really cared about the idea of a story actually helps the film out, seeing as how it's less a complete narrative and more just a series of scenarios that border on becoming non sequiturs. There's the family's brief encounter with a crazy truck driver, then there's the family's brief encounter with a crazy hitchhiker – played by Shannon Elizabeth – which segues into the family's crazy encounter with a small alligator (an attempt at humor that is first punctuated by a tactless erection joke). Then there's the time when the Johnson's run into a pre-'Game of Thrones' Jason Momoa at an Indian casino for no other reason than to give Solange Knowles' utterly unimportant character something to do – which is to say, she does a great job of staring at his flowing locks and eye liner, since the scene goes nowhere fast.

That's the thing with 'Johnson Family Vacation': It's so intent on giving its characters something to do that could be construed as being funny, it never bothers to turn them into actual characters. The end result, then, is a film that feels half-formed and totally tone deaf. Even Cedric's various charms and willingness to reach for any joke, or the late inclusion of Steve Harvey have little impact on the overall feel of the film. What was before a somewhat incongruous tale of a family trapped in a cramped, moving space together, soon turns into the Johnson Family Talent Show – where only the two siblings are allowed to participate, apparently. This bland plot device seems to have been put in to justify the casting of two singers and a rapper, and even then, the show they put on does almost nothing to display their talents.

In a way, the climax of the film serves to describe the film itself: A nonsensical event with nothing at stake that takes a group of talented performers and makes them look like anything but. 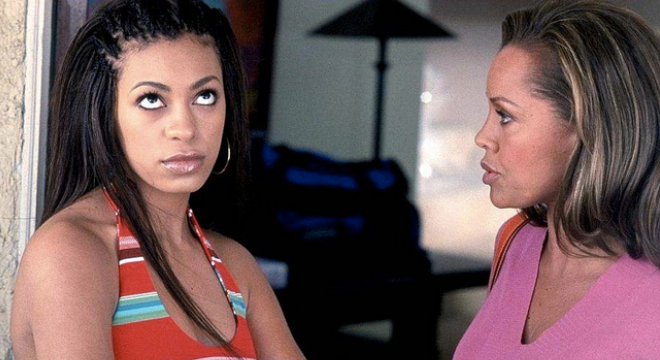 'Johnson Family Vacation' comes from Fox as a single 50GB Blu-ray disc in an eco keepcase. The disc surprisingly offers two commentaries and a selection of deleted scenes with optional commentary.

Having just hit its tenth anniversary, 'Johnson Family Vacation' unsurprisingly offers a very nice looking, detailed picture. The image is strong and steady throughout, offering up plenty of fine detail in facial features and clothing textures. The warm palette is also consistent in how it delivers a pleasant, but vivid array of colors that never overwhelms.

Contrast, meanwhile, is very high, resulting in nighttime scenes that are robust and inky, without detracting from any of the fine detail. Most of the film takes place during the day, however, and the contrast maintains even white levels that never look blown out or too bright, even though they sometimes appear to be running a little hot.

This is a very clean and consistent image that is only undone by the relative ordinariness of it all. There's nothing remarkable in the way the film looks, from the plain, uninspired camera placement, to the flow of the film, 'Johnson Family Vacation' has the benefit of being a great looking disc that just so happens to have show one of the most visually uninteresting films in quite a while.

The DTS-HD Master Audio 5.1 mix does a great job creating the sense that the film is unfolding, for the most part, inside of a moving vehicle. While the dialogue is always crystal clear and easily understood, the disc's dynamic range is going the extra mile to deliver a subtle but consistent atmospheric effect that goes a long way in making the film's sound a little more exciting. The ambient noise of the road works to the mix's overall advantage, but even when the Johnson's are in a roadside motel, or inside a casino, the level of atmospheric sound never drops.

Elsewhere, the mix does a great job of handling the music and the sound effects, pumping both up when it's necessary, and settling them down when dialogue is being delivered over them. The level of balance is quite good, and only seems to drop a few times towards the end of the film, when the Johnson Family Reunion turns into a competition – meaning montage set to music – and the balance feels like it's a little out of whack at times.

Beyond a few small issues here and there, this is a very nice sounding disc.

It's easy to see where a new franchise might have been born out of this particular family vacation; especially since Cedric the Entertainer's profile was very high at the time. Unfortunately, while some of the jokes manage to be funny, they rarely seem to fit in with the overall theme of the film, or they require the characters to suddenly forget who they are for the purpose of making a joke. Still, this disc looks and sounds very good, and the inclusion of two commentaries is a pleasant surprise. It's not for everyone, but this disc could be worth a look if you've never seen 'Johnson Family Vacation' or it's been a while and you feel like taking another trip with the titular family.

Sale Price 7
Buy Now
3rd Party 7
In Stock.
See what people are saying about this story or others
See Comments in Forum
Previous Next
Pre-Orders
Tomorrow's latest releases