Psychedelic late 1960s pop fantasy released by the Beatles' Apple films, with music by George Harrison and surreal brightly-coloured sets. Jack MacGowran plays Oscar Collins, an eccentric butterfly scientist who becomes obsessed with his neighbour, Penny Lane ( Birkin) after discovering a secret peephole in the wall between their flats. Penny is a young and beautiful fashion model, who spends her days in her rainbow painted pop apartment smoking dope, cavorting around in various states of undress and making love to her sexy boyfriends. Collins is soon overcome by his delusional fantasies about her, and repeatedly loses himself in trippy musical daydreams.

For many, the title 'Wonderwall' will likely take them back to the 1995 song by the combative Gallagher brothers band Oasis. That enormous hit skyrocketed the group to new levels of fame, and cemented their connection with the Beatles as something more than the copious similarities in their sounds. As it stands, the song's influence and popularity essentially eclipsed the 1968 psychedelic film from which it took its title and inspiration – largely because the bizarre little film had been widely forgotten not long after its initial release.

Thanks to Shout Factory, though, director Joe Massot's fascinating collaboration with screenwriter Gérard Brach and Cuban novelist Guillermo Cabrera Infante, is ready to move past being an obscure talking point for cinephiles and anglophiles alike, to become a welcome discovery – a time capsule of sorts – of a bygone era that still holds plenty of allure and influence over popular culture. And, like any good obscure film, the story behind 'Wonderwall' – or at least those instrumental to making it – is as interesting as the movie itself.

Massot was making films in Cuba before heading over to London in the early '60s, where he fell in with some of the more iconic popular culture symbols of the time; namely, Mick Jagger, photographer Robert Freeman, and The Beatles – who would appear in his short film 'Reflections on Love.' Through that association, 'Wonderwall' would wind up with a soundtrack by "quiet" Beatle George Harrison, titled 'Wonderwall Music,' which would then go on to become the first solo album by a member of the band. Meanwhile, the story for the film sprang from the mind of Brach – a frequent collaborator of Roman Polanksi – while the actual screenplay was handled by Infante – who would go on to pen the 1971 cult classic 'Vanishing Point.' The production even managed to land Jack MacGowran, a distinguished Irish actor who had previously been acclaimed for his roles in film and stage alike. 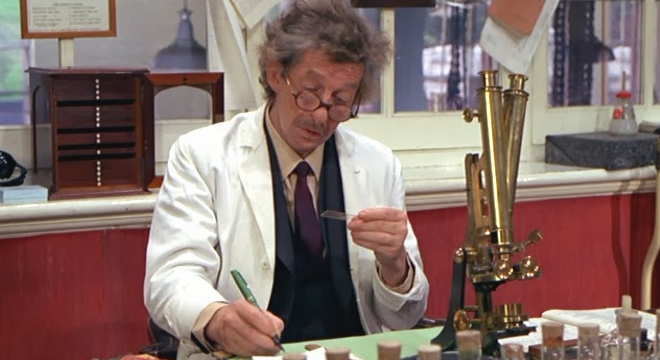 The film was a confluence of talent – tested and untested alike – to be sure, and the result is a charming oddity about Professor Collins (MacGowran), an aloof research scientist bearing an uncanny physical resemblance to Albert Einstein, who lives a semi-reclusive life shuttling back and forth between his laboratory and the tiny, cramped apartment he shares with towering stacks of papers and various insects (both alive and dead) on display. Just who these collections are on display for is another question altogether, as the only visitor Professor Collins seems to have is his sparkplug of a cleaning lady, Mrs. Peurofoy (Irene Handl). Soon, however, Collins' seemingly bland existence is thrown into disarray when strange music is heard coming from the next-door apartment. Upon closer inspection, the professor discovers the porous nature of his wall – soon to become the titular wonderwall – not only allows for the distracting music to announce itself so easily, the wall grants him access to peep in on his neighbor, a young model by the name of Penny Lane (Jane Birkin).

As luck would have it, the lovely Ms. Lane is often parading around her apartment in various stages of undress, either striking a seductive pose, or cavorting with her photographer boyfriend – credited only as "Young Man" – played by Iain Quarrier. What was initially a distraction, or simply a mild curiosity, unsurprisingly turns into a full-blown obsession, as Collins finds himself unable to concentrate on anything besides his growing fascination with the woman he's never technically met. Instead, he continues to feed his fixation by refusing to go to work, and by modifying his wall of wonder to afford himself greater access to the object of his voyeuristic desires.

The concept comes off more than a little creepy, but the lighthearted, slightly stoned tone of 'Wonderwall' keeps the film from becoming an unpleasant riff on peeping toms. In fact, once the film has determined its basic premise and introduced all of its characters, Massot and Infante simply approach the concept of obsession and voyeurism through a succession of vaguely similar circumstances. Collins peers through the wall; Penny Lane is engaged in some model-like activity; Collins tears his hair out (figuratively) concocting a way in which to make the young woman his own. The only time the film ventures away from this set up is when Lane's boyfriend stops by to ask the professor for some ice, or when Collins' increasingly addled brain begins to fantasize about becoming Lane's defender, through a series of increasingly abstract daydreams that are loaded with even more blatant imagery than the rest of the film.

'Wonderwall' plays with some basic symbolism and imagery through its psychedelic visual aesthetic, but even that is heavily augmented by Harrison's sitar-heavy soundtrack. The composition that is so prominent, and such a driving force through what little narrative there is, it becomes clear his music is the raison d'être for the entire film. Still, there are some interesting and timely thematic undertakings that hint at the paradigm-shifting cultural movement, as represented by the well past middle-aged Professor Collins and the youthful radiance of his inadvertently seductive yet sad neighbor. The depiction of generational divide, then, made even clearer by the wall separating both character's very different lives and lifestyles.

Eventually, given the one-sided nature of the film's kaleidoscopic imagery, the audience is left to question the validity of what it is that Professor Collins is actually seeing. There is always some larger fiction being crated about the goings-on of "the other side," which then become even more outrageous considering the fictions, which are conjured up when infatuation sets in. Near its conclusion, the film seems to set this question up by allowing Collins entry into the world he's longed for access to, only to learn an ugly truth about such beautiful people.

Despite a supposedly transformational denouement, all the '60s psychedelic imagery, and omnipresent musical stylings of George Harrison, 'Wonderwall' winds up being an intriguing and entertaining novelty that may have worked better as a short like Mossat's 'Reflections on Love.' Still, even though it doesn't completely manage to come together as a cohesive whole, the film captures the essence of an era with a great deal of charm and energy, and that makes it a worthwhile endeavor at the end of the day. 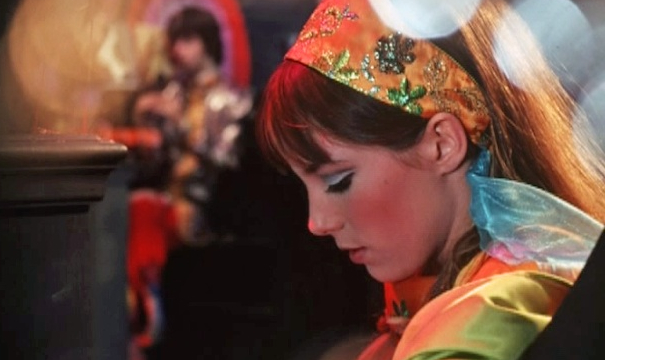 'Wonderwall' comes from Shout Factory as a single 50GB Blu-ray disc in the standard keepcase. The disc does not contain any previews, so it will head to the top menu upon start up. The disc is loaded with some fairly standard special features, but it also includes a fantastic 32-page booklet detailing nearly every angle of the making of the film.

'Wonderwall' was given a very thorough remastering by the folks at Pinewood Studios and the results are a quite impressive. The film is obviously reliant on its visual aesthetic and imagery, and for the most part, the remastering process brings out a great deal of fine detail, amazingly bright colors, and a sharp image with crisp edges. Now, there are a few scenes where the quality dips noticeably, but not dramatically. The fine detail fades and the contrast seems to be lessened in these instances – which are almost exclusively outdoor shots – but they are few and far between, leaving the indoor locations to present a bright, sharp image the rest of the time.

As mentioned above, fine detail is present throughout most of the film, and the image even manages to have some textural elements as well. Facial features look remarkable in some instances, detailing the expressiveness of MacGowran's face and the striking features of Birkin's flawless complexion. Colors are represented quite well throughout, with reds, yellows, and even greens coming across as incredibly vibrant, but not oversaturated. Everything maintains a slightly dreamlike appearance without looking phony, which helps to play up the dichotomy between Collins and his neighbor and the question of fiction versus reality. Contrast is also high in everything but the outdoor scenes. Full-bodied blacks are present, while the image displays no crush and very good shadow delineation.

Overall, this is what you want in a remastering of a film this old. The colors come through brilliantly, and aside from a few issues that can likely be blamed on the passage of time, it's a very nice image.

The film has been given a DTS-HD Master Audio 5.1 mix that plays up the soundtrack more than anything, but that's not surprising, as George Harrison's soundtrack takes prominence over nearly everything the film has to offer anyway. To be quite honest, there is very little dialogue in the film, as most of the narrative is driven by a repetition of images, with the sounds of sitars playing over them. Most of the music, then, is driven through the front right and left speakers, though some of it will emanate through the rear channels on occasion. Dialogue is unsurprisingly reserved for the center channel, and it can sometimes come off feeling a little flat, as do the various sound effects placed in throughout the film.

Still, the sound manages to present the dialogue in a clear, clean fashion that makes it easily heard and understood, despite the mix's heavy reliance on the soundtrack. There's not much in the way of a natural cinematic atmosphere, though certain instances featuring Collins drilling holes in his wall or breaking through the ceiling work quite well. This leaves most of the mix's immersive nature up to the soundtrack. Again, the music here sounds quite good, but it's apparent that it may be at the expense of other elements.

However, as Harrison's tunes are likely the most important component of the film, highlighting them would seem to be the smart thing to do.

Wonderwall' is a strange little time capsule of a movie that will likely have more of a cultural impact in hindsight than it ever did during its initial release. There are two cuts of the film available on the disc, and the shorter director's cut makes it clear how easily some of the recurring scenarios could be excised without having a negative impact on the film. At the end of the day, the movie revolves around its soundtrack as much as its charm is generated from MacGowran's hilarious performance. Additionally, the remastering the film was given breathes new life into an old film that benefits greatly from getting it's visuals optimized. Although there are plenty of extras, they are not as in-depth as they would have you believe. All in all, though, this is an entertaining picture just waiting to be discovered by a new audience; it comes recommended.

Sale Price 15.1
List Price 24.97
Buy Now
3rd Party 13.58
In Stock.
See what people are saying about this story or others
See Comments in Forum
Previous Next
Pre-Orders
Tomorrow's latest releases