While a group of young actors rehearse a new musical about a mass murderer, a notorious psychopath escapes from a nearby insane asylum. But when the show's director locks his cast in the theater overnight, the madman is accidentally locked inside as well. Now, a killer with acting in his blood has gone berserk for the blood of actors (including several scenes that EuroHorror fans worldwide consider to be the most violent of the decade) and the stage is set for one unforgettable evening of shock, suspense and unstoppable carnage.

The pressure and mental strain of preparing for a dance production set to open in a couple weeks serves as the setting for Michele Soavi's directorial debut 'StageFright: Aquarius.' Why it's spelled as one word or the purpose and meaning of the epithet is not clear, and the movie, of course, does nothing to provide the slightest clue. Its original title was 'Deliria,' which, given the subject matter, makes a good deal more sense than the name of constellation which may or may not also hint at the astrological sign. Also taking into consideration that a down-on-their-luck dance troupe is at the height of stress and agitation — a great character feature that nicely adds to the suspense and story — while hunted by a psychopathic killer, the reference to delirium and delirious is the crowning touch to a horror flick about a frenzied, violent mental state. But really, that's a very minor gripe in an otherwise excellent, well-made genre piece.

Using the very familiar conventions of the "slasher," which by 1987 when this production hit screens was indeed a well-worn routine, Italian filmmaker Soavi furnished the giallo thriller, which it, too, had grown tediously common, with new life and a fresh feel. And it wasn't so much that he introduced new ideas and twists to an easily recognizable template any shrewd, demanding moviegoer would quickly dismiss. Instead, the film's success and appreciation — an opinion that, of course, only grew with its cult status — comes from Soavi's skill behind the lens and the camerawork of Renato Tafuri. A few years later, Soavi demonstrated his talents with the existential horror-comedy 'Cemetery Man' ('Dellamorte Dellamore'), though sadly, he hasn't doing anything of real note since, mostly making television movies. Nonetheless, polished with flair and panache, Soavi prevails with style breathing new life to the conventional. 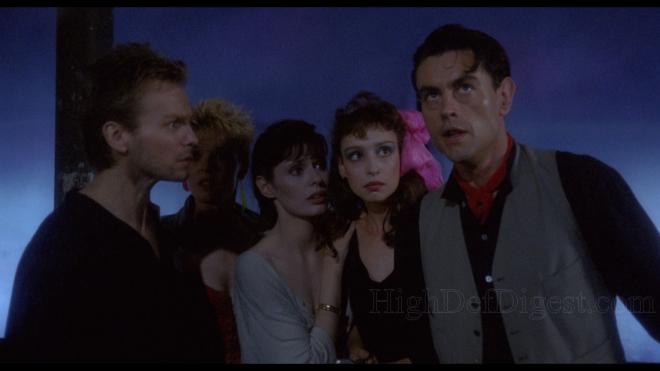 Initially starting his career as assistant director to the likes of Dario Argento, Lamberto Bava, Joe D'Amato and Terry Gilliam, Soavi clearly learned quite a bit, either unconsciously or as an intentionally observant student, grasping the understanding that storytelling is ultimately told visually. Working from a script by George Eastman, pseudonym of Luigi Montefiori, who a decade earlier wrote the awesome Italian western classic 'Keoma,' the plot sets up the identity of the killer well in advance as Irving Wallace (Clain Parker), a mentally-disturbed actor that murdered a dozen people and later dons a nightmarishly cool owl mask. This, in turn, frees Soavi from fixating or relying on a final reveal, allowing him to concentrate on building suspense and the drama of the struggling dance company, who have been permanently locked inside the theater. Their survival is a mad search for the keys while also quelling egos, which surprisingly serves to differentiate characters as more than typical fodder.

In 'StageFright,' after a rather admirable opening that turns out to be a rehearsal sequence, Soavi frames his story in fairly standard fashion, little flukes that conveniently situate the killer and quickly shrink the possibility of escape to practically zilch. But once our masked maniac slips on that owl costume and takes his second victim during another rehearsal scene while angrily urged by the production's domineering director Peter (David Brandon), Soavi makes his known that the audience is in for something slightly different. And it's only one of several stylishly impressive sequences that seem suggestive of blurring the lines between reality and fiction, where fantasy confuses sanity. Granted, Soavi doesn't delve deeper and keeps to the customary expectation of the "Final Girl," in this case Alicia (Barbara Cupisti), building the courage to finally fight back. Yet, even in this, the Italian director makes the predictable engagingly fun with gory hilarity and a cleverly delightful wink in the end for genre fans.

Blue Underground brings Michele Soavi's 'StageFright: Aquarius' to Blu-ray on a Region Free, BD50 disc housed in the standard blue keepcase. At startup, the disc goes straight to the usual selection of menu options with full-motion clips and music playing in the background.

The show goes on with a pair of highly enjoyable DTS-HD Master Audio soundtracks: a brand-new 5.1 remix for modern systems and an arguably superior 2.0 stereo track. While overall pleasant with strong dynamic range and excellent movement between the channels, the former is very front-heavy with minor bleeds in the surrounds but somewhat anemic bass. On the other hand, the latter, which is closer to the original design, offers a much broader soundstage with discrete effects and excellent, distinct separation in the mid-range. The score enjoys superb clarity in the orchestration and the low-end is more robust, providing weight and depth. Though the ADR work is at times noticeably apparent, vocals are precise and intelligible in either lossless mix, making both a satisfying listen.

The pressure and mental strain of preparing for a dance production set to open in a couple weeks serves as the setting for Michele Soavi's directorial debut 'StageFright: Aquarius.' After a rather admirable opening that turns out to be a rehearsal sequence, the Italian filmmaker makes the predictable engagingly fun with gory hilarity and a cleverly delightful wink in the end for genre fans. The Blu-ray arrives with an excellent audio and video presentation that exceeds expectations, and with a welcomed though small assortment of supplements, the overall package makes for an awesome addition to any cult enthusiast's collection.

Sale Price 29.99
Buy Now
3rd Party 22.42
In Stock.
See what people are saying about this story or others
See Comments in Forum
Previous Next
Pre-Orders
Tomorrow's latest releases