What if you found out you were going to die suddenly, but there was an opportunity to have a replacement you cloned so the people who love you won’t miss you? But then what if you don’t die? There can’t be two yous can there? Dual is an intriguing near-future sci-fi comedy with a bone-dry sense of humor from Riley Sterns and starring Karen Gillan as a young woman in just such a predicament. With a solid A/V presentation, this is not a film for everyone but for those with a bleak sense of humor, you should get a kick out of it. Worth A Look

Sarah (Karen Gillan) is attractive and intelligent, but her life isn’t exactly exciting or stimulating. Her boyfriend Peter (Beulah Koale) takes extended work trips. Her Mother (Maija Paunio) calls incessantly about nothing. Then when Sarah contracts an extremely rare and fatal digestive disease with a 2% chance of survival - she has herself duplicated so Peter and Mother won’t miss her. However, chance, in this case, was in Sarah’s favor. After a miraculous recovery, Sarah is 100% healthy but now there’s that Other Sarah who has ingrained herself into Sarah’s life to the point that Peter and Mother actually like her better. By law there can’t be two Sarah’s running around, so now it comes down to a televised duel-to-the-death and Sarah has a year to figure out just how she’s going to kill Other Sarah. 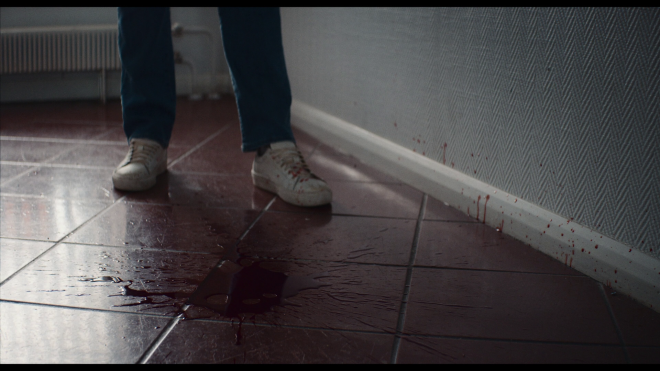 If you’ve followed the trajectory of Riley Sterns as a filmmaker, Dual fits right into his unassuming catalog including The Art of Self Defense and Faults. The humor in his films has never exactly been surface level and the jokes can easily sail over your head and out of reach. It’s the situation dictating the comedy and whether or not you find that setup hilarious that'll make or break his films for you. His films aren’t for everyone and I’d say Dual is even more of an outlier in that regard. The comedy is so bone dry with each character delivering stilted near-emotionless deliveries that it’s not easy to pick up the joke and the pace can become a bit tedious.

Conceptually Dual slides into a similar world of Yorgos Lanthimos’ The Lobster where it can be described as near-future science fiction with an absurd sense of humor. For Dual much of the humor is squeezed from its extremes. People do extreme things like hear they’re about to die, or live, or meet their clone, or train extensively to learn to kill - and everything is met with a passive response. The jokes are absurd as are the scenarios, but the punchline just hovers there. The payoff for a gag doesn’t go to an extreme to match the scenario and this is true right up to the end of the film - which I thought was hilarious but at the same time not something altogether satisfying for most folks. I enjoyed where this movie went, but it left me wanting more from it. 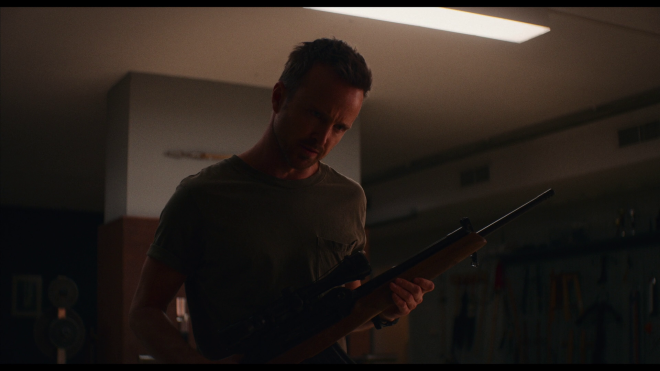 At the lead of the show is another great turn from Karen Gillan in a dual role to duel to the death. I enjoyed how she played the two versions of herself. The different degrees of aggression and passivity between them were pretty damn funny. In an equally dry-but-funny performance is Aaron Paul as the trainer Trent. The humor of his character comes from how stale and every day he can describe all of the horrific ways you can kill someone. And all credit due to Sterns for crafting this goofy scenario where one’s family could like the copy of you better for no other reason than they’re just not exactly you. There’s humor and laughs to be had, but not in a way most will find rewarding. Certainly not one for everyone, but then everyones’ sense of humor is different so who knows, you could love it!

Vital Disc Stats: The Blu-ray
Dual arrives on Blu-ray from RLJE in a single disc release. Pressed on a Region A BD-25 disc, the disc is housed in a standard sturdy case. The disc loads to trailers for other RLJE releases before moving to a standard main menu. 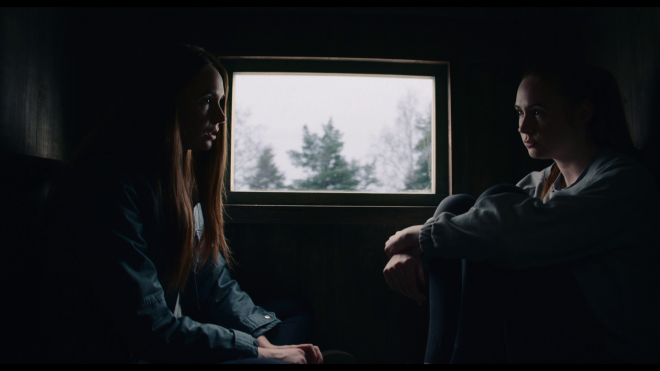 If the IMDB tech specs can be trusted, Dual was shot digitally and sports an often stunning 1.85:1 1080p transfer. There is an appearance of film grain to the image but that must be a post filter - thankfully it actually looks organic to the film and isn’t a distracting blobby mess as filters can sometimes appear. Instead, it lends itself to this weird little visual world. Details are clean and clear with sharp lines and fine textures throughout. Facial features, the production design, and costuming are all on full display. Colors for the film tend to favor a cooler blue cast leaving little room for a lot of color pop but there are highlight moments like when Sarah vomits blood at the hospital - as another example of odd dry humor. Skin tones are all healthy and natural without issue. Black levels are on point lending some welcome three-dimensional depth to the image. 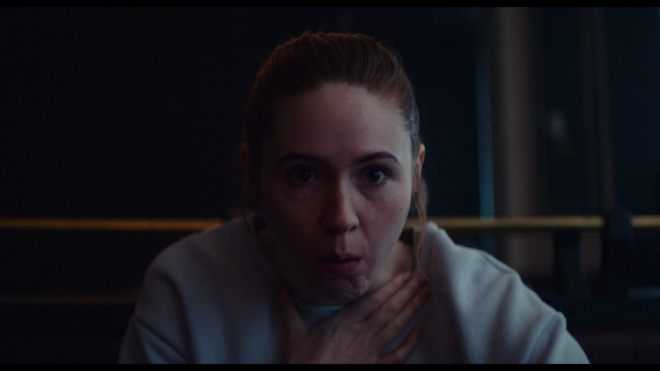 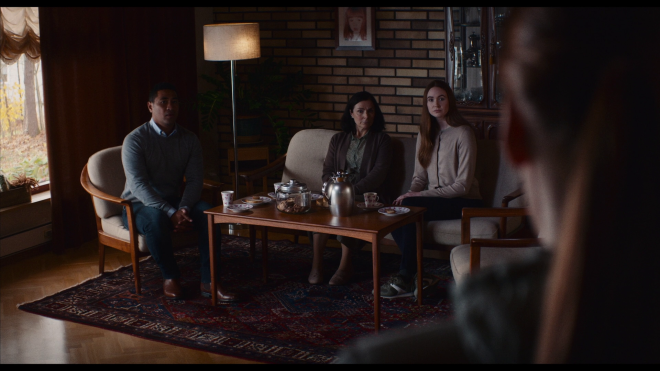 Dual comes in with an often subdued DTS-HD MA 5.1 audio track that focuses more on the central dialog on screen without a lot of expansive audio effects. There is channel movement and enough surround activity to keep the soundscape engaging and somewhat immersive, but much like the dialog, it is pretty dry and almost antiseptic without a lot of music or anything to draw attention to itself. That’s not a fault of the mix or this track but just how the film was designed. There are bursts of activity to keep things engaging but largely it’s a Front/Center affair. With that, the dialog is clean and clear without issue and levels are spot on so you won’t need to ride the volume any. 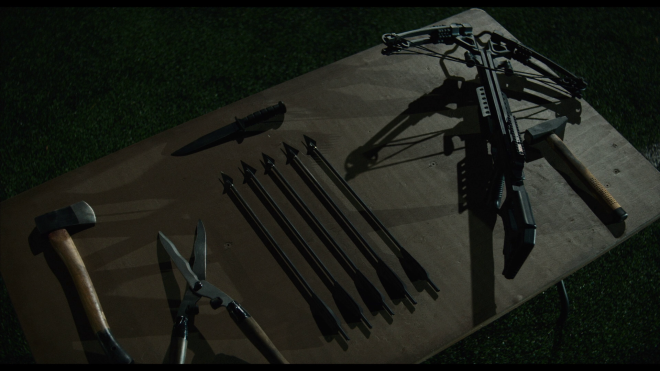 There aren’t a lot of bonus features with this disc, but what we’re getting is pretty good. Riley Sterns flies solo for his audio commentary track and he’s always engaging with it filling the space with a lot of production information and stories about the shoot and how he pulled things off with a relatively small and tight budget. After that is a pretty basic but informative EPK behind-the-scenes featurette. 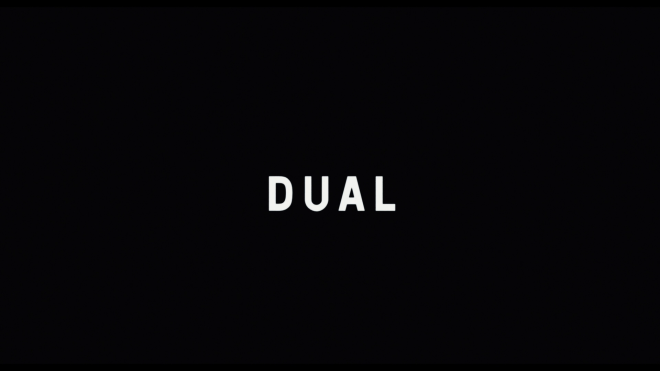 As a fan of The Art of Self Defense, I had a rough idea of what I was getting into with Dual. The humor comes from the scenario and how people react to what’s put in front of them. The running joke for Dual is no matter how shocking something is, everyone reacts almost as if it's commonplace and “every day.” That joke can carry only for so long so depending on what tickles your funny bone, your mileage may vary with this film. As much as I enjoyed it, I was frustrated that it didn’t go further with the material. RLJE delivers an excellent Blu-ray release of Dual sporting a strong A/V presentation with a great audio commentary to prop up the slim selection of bonus features. Again, this won’t be for everyone, but I can see some folks out there getting a genuine kick out of it, so you won’t know you’ll love it until you give it a whirl. Worth A Look