Rod Steiger (In the Heat of the Night) earned a Best Actor Oscarr nomination for his stunning performance in this powerful story of hope and empathy from celebrated director Sidney Lumet (Dog Days Afternoon). Steiger plays Sol Nazerman, a survivor of a WWII Nazi death camp where his wife, parents and children were murdered. His soul robbed of hope, he takes refuge in misery and a bitter condemnation of humanity while managing a Harlem pawnshop subjected to an endless parade of prostitutes, pimps and thieves. Jamie Sanchez (The Wild Bunch) plays Ortiz, Sol's underprivileged and idealistic assistant who dreams of a better life. Two of the film's best features are the gorgeous black-and-white cinematography by the great Boris Kaufman (On the Waterfront) with a memorable trumpet score by the legendary Quincy Jones (The Getaway). The wonderful cast also includes Geraldine Fitzgerald (Wuthering Heights), Brock Peters (To Kill a Mockingbird) and Raymond St. Jacques (Cotton Comes to Harlem).

Director Sidney Lumet's stunning 'The Pawnbroker' may be one few people have heard of, and even fewer have seen. Although it garnered Rod Steiger an Academy Award nomination, this dense, meditative 1964 black-and-white film isn't brought up much when either director or actor is discussed, proving it to be something of a forgotten example of both men's immense filmmaking and acting prowess. Perhaps it speaks to enormity of the filmographies of both Lumet and Steiger that, despite this particular work being a veritable showstopper, the men are more readily remembered for things like 'On the Waterfront,' 'In the Heat of the Night,' 'Dog Day Afternoon,' and 'Network.'

With a list of "classic" films such as that, it's easy to see why 'The Pawnbroker' may have slipped in under the radar of many or failed to capture a larger audience and then retain it over time. Then again, unlike any of those abovementioned films, 'The Pawnbroker' admittedly serves up a far different emotional feast. Rather than build toward the kind cherished, clip-worthiness of Lumet and Steiger's other efforts, this film prefers to stir up an emotional response through less conventional means, and by its focus on far more uncomfortable discussions, like the origins of unyielding misanthropy as a byproduct of tremendous suffering.

Steiger stars as Sol Nazerman, a survivor of the Holocaust, which claimed the lives of his wife, their two children, and his parents. Since his liberation from the death camp, Sol has since emigrated to the United States, taking up as the owner of a Harlem pawnshop wherein his acquired distaste for humanity and social interaction is tested daily by an incessant stream of downtrodden, luckless individuals hoping to make a quick, often necessary buck by pawning off their possessions – some prized, many simply found, and others clearly stolen – for a fraction of their worth. Throughout the interactions, Sol remains stolid and uninterested in the stories of his customers, as he writes receipts and tags their items to be placed in the veritable museum of junk and trinkets that exists behind the gated counter. 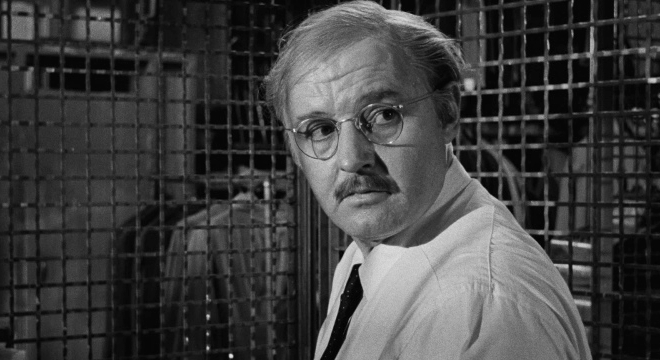 There are moments when Sol seems to have a spark of life still within him, such as the time he takes time out to teach Ortiz (Jaime Sanchez), his young assistant, about ways to authenticate precious metals.  And again, when he makes the acquaintance of Marilyn Birchfield (Geraldine Fitzgerald), an active member of the community who takes a strong interest in Sol and his wellbeing. Naturally, however, Sol's reticence to form emotional bonds with anyone – let alone strangers – is strong, and from that, along with Sol's involvement with a local criminal named Rodriguez (Brock Peters), 'The Pawnbroker' draws copious amounts of tension.

But in a rare, superlative cohesion of its many parts, the film achieves something far greater than the elegiac beauty of its narrative; it becomes a stunning work of art thanks to the sumptuous and incredibly dramatic black-and-white cinematography by Boris Kaufmann ('12 Angry Men,' 'The Fugitive Kind' and, of course 'On the Waterfront'), which, when combined with the editing of Ralph Rosenblum ('Annie Hall'), morphs into something even more significant and powerful. The opening sequence begins with a depiction of rural idyll, wherein a family – featuring a much younger Sol – picnics by a river, the father playing blissfully with his children, as his wife looks on from under the shade of a tree. The scene's only sound is the film's score, which adds to the slightly slowed, dreamlike serenity of the memory (perhaps even fantasy), one that comes to a screeching halt with the arrival of two German soldiers. This lengthy, almost languorous segment is in stark contrast to the rapid, staccato editing seen later in the film, when Sol finds himself miles away, recalling his time in the death camp with near-convulsive flashbacks.

The manner in which the film gradually introduces the flashbacks is an instance where the psychic distance between the viewer and the protagonist is shockingly and effectively close. The edits work in such a way that they literally cut into the film, becoming paroxysmal signifiers of pain and anguish accompanied by such a deliberately discordant sound design, the effect is nothing short of astounding: The memories become as unwelcome to the viewers as they are to Sol. Such a poetic and resonant combination of the various elements of filmmaking would have set the film head and shoulders above most other films, but Steiger's pained performance is so consistent in its depiction of misery and Sol's condemnation of humanity as a whole that it pushes 'The Pawnbroker' to a place few films care to go.

As the pernicious elements of Sol's crumbling environs relentlessly encroach on what was formerly a solitary existence, the narrative swings in such a way to suggest that Sol's misanthropic state could be partially alleviated by the connections he's so far kept at arm's length. But the film's denouement sharply undercuts the temptation for such reconciliation; there is no easy way out from under the weight of such crushing sorrow. Such is the resounding sense of alienation that is carried throughout the film, the kind that registers not only with Sol, but also with the supporting characters like Ms. Birchfield, Ortiz, and perhaps most poignantly, his girlfriend played by Thelma Oliver, who goes to symbolic lengths in a futile effort to be given a few extra dollars for the object she just pawned.

As Sol's story pushes toward a new stasis point, the events of the narrative don't necessarily usher him toward a fresh sense of compassion or empathy, instead it marshals him to an even bleaker place. The reduction of people and emotions and memories to mere material objects or commodities to be exchanged for far less than they are worth becomes a powerful denunciation of a society the film sees as being in rapid decline. All of which adds up to a caustic tale that isn't just striking to look at, but is intensely riveting as well. 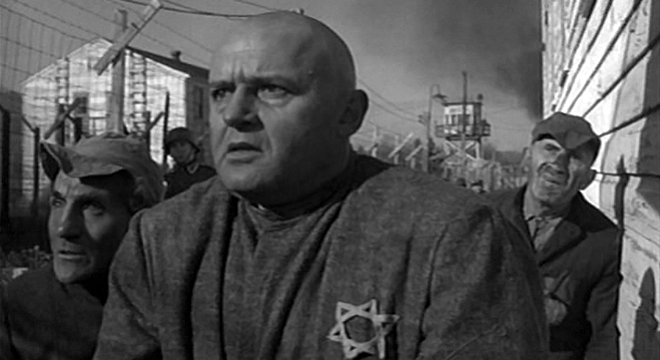 'The Pawnbroker' comes from Olive Films as single 25GB Blu-ray disc. As with all Olive releases, there are no previews or special features.

The 1080p AVC/MPEG-4 encoded transfer brings out the best of Kaufman's stunning cinematography. The image is bright and clear with sharp, focused edges and a fantastic amount of fine detail. That detail is present in nearly every scene, and it helps show a remarkable difference in the three stages of Sol's life. In fact, the detail offers wonderful clarity in facial features all around, as well as in textures and background elements. The depth of field is such that when Sol ventures outside of the pawnshop, the city comes alive around him and background elements remain clear and distinct throughout.

Mostly, though, this image is all about representing the gorgeous black-and-white cinematography, which it does with a high level of contrast throughout. Blacks are full-bodied, and either helps frame the rest of the image or work to create a powerful feeling of negative space. The grayscale offers a wide range between the blackest black and the whitest white, which is further enhanced by the white levels maintaining an even tone throughout the film as well.

There are a few moments when the image is inundated with more grain than the rest of the film, which can be a little jarring, but those moments are thankfully brief. Otherwise, this is a great looking transfer for a film that certainly deserves one.

The disc has been given a very nice sounding DTS-HD Master Audio 1.0 mix that works to reproduce the film's dialogue with great detail and clarity, while also playing up the fantastic score from Quincy Jones. For many reasons, the music here is the star of the show, as the lossless track presents the score in a surprisingly rich and deep manner. Notes are striking throughout the film, and remain impressive from start to finish. Meanwhile, the mix manages to balance out the score quite well, giving way when necessary to the dialogue or the limited sound effects. Surprisingly, the mix also delivers some nice atmospheric elements that help create a better sense of place in mid-60s Harlem. Additionally, the audio is free of any scratches, hissing, or clicks.

This is a very nice sounding mix that offers much better sound than one might have imagined.

'The Pawnbroker' does not offer any special features.

'The Pawnbroker' is the kind of film that contains many diverse layers ready to be interpreted and investigated for not only their particular insight into the concept of misanthropy and condemnation, but in terms of the way it doesn't seek necessarily seek to achieve resolution. That may make the story difficult or too bleak for some, but the way in which Lumet and his collaborators have sought to assemble the film, and fill its presentation with subtext as rich and powerful (if not more so) than the narrative itself should make the movie worth one viewing at least. Although there are no special features, the film, picture, and audio are of such consistent quality that this easily comes highly recommended.