What happens When Coca-Cola finds out there’s an area in the world where the greatest soda doesn’t have a market share? Why, they send in their best troubleshooter - The Coca-Cola Kid. Dušan Makavejev directs this charming, quirky, if also a bit unfocused fish-out-of-water romantic comedy featuring a great leading turn from Eric Roberts, with Greta Scacchi, and Bill Ker. Thanks to Fun City Editions with Vinegar Syndrome, this eccentric little 80s gem earns a terrific A/V presentation and a nice selection of bonus features. Worth A Look

Coca-Cola is king. Sure there’s that Pepsi stuff but no one else has the worldwide reach of the number one soda company in the world. But there’s something up with Australia. Sure, folks down under can pop a bottle of the dark delicious bubbly soda, but sales just aren’t where they should be. So Coca-Cola sends in their best troubleshooter, Becker (Erick Roberts) to get things back up to snuff. Only Becker didn’t expect to deal with the romantic advances of his secretary Terri (Greta Scacchi) and he didn’t count on finding a virtual dead zone where the world’s best cola beverage isn’t sold or consumed thanks to an eccentric soda magnate McDowell (Bill Kerr).

You’ve probably seen The Coca-Cola Kid without actually seeing it. This fish-out-of-water film runs the plot-point playbook. Upstart corporate know-it-all gets schooled on eccentric local customs, falls in love, respects the opposition, and becomes a better man. No surprises. As I said, it’s a pretty familiar story. However, what makes this one work is the flavor of this outing - and I don’t mean the titular beverage.

Director Dušan Makavejev crafts a fun easy breezy comedy from a clever script by Frank Moorhouse. From Eric Robert’s corporate-focused Becker to Scacchi’s flamboyant Terri to Bill Kerr’s entertaining McDowell, every character is given plenty of attention and focus. You steadily get to know these people and their ways and watch them evolve. While little is shocking or unexpected about their character arcs, it’s a nice story and these great actors carry the dramatic emotional load while keeping the show light and entertaining. 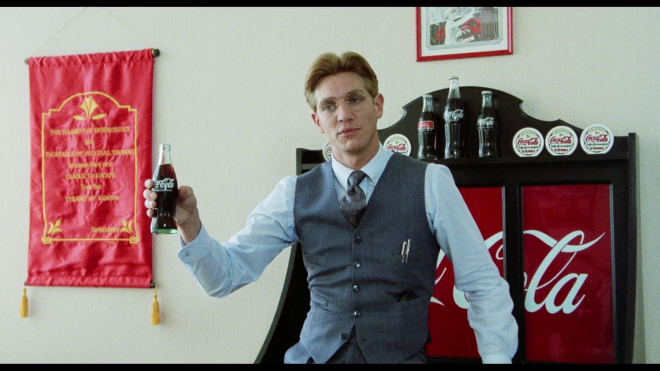 Where The Coca-Cola Kid falters is there is a little too much going on. While it’s nice that the film isn’t strictly following the romantic comedy map, some of its detours go in odd directions seemingly for the sake of being odd. Some instances are used to reinforce Becker as out of his depth in a foreign land with different ways of doing things, but then others are just flat bizarre. I still don’t quite get the point of Terri having her gay friend hit on Becker at a party, but, it happened. The Hotel waiter who has the wrong idea about Becker? Yeah, that's another curious addition to the story. At 98-minutes, the film itself isn’t long, it’s these strange detours that make it feel far longer than it is.

Aside from the plot deviations, The Coca-Cola Kid proves to be an entertaining jaunt. Shot on location throughout Australia, it often has the look and feel of a travelogue that just wants you to soak in the beautiful locations. The cast headlined by Eric Roberts is great with Roberts and Scacchi, in particular, offering up some great performances. When the film is on point it’s a nice little show and well worth checking out.

Vital Disc Stats: The Blu-ray
The Coca-Cola Kid comes to Blu-ray from Fun City Editions with Vinegar Syndrome. Pressed on a BD-50 disc, the disc is housed in a standard clear case with reversible insert artwork. If you order through Vinegar Syndrome you can score a limited slipcover. The disc loads to a standard main menu with traditional navigation options. Also included is a 10-page booklet. 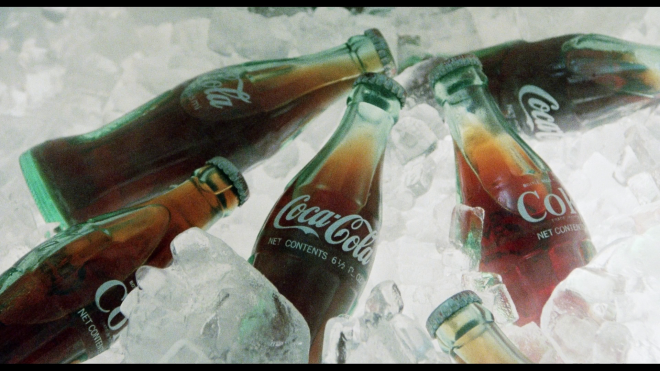 The Coca-Cola Kid works some magic on Blu-ray with a splendid 1080p transfer reportedly sourced from a new 2K restoration. Especially with the scenic locations, there are many moments where this image is simply gorgeous. Details are strong throughout allowing for facial features, clothing textures, and production design to come through beautifully. You get to fully appreciate all of the 1985 designs and styles. Colors are fairly good with strong primaries. My only niggle is reds feel pushed a tad giving skin tones an overly pinkish hue. Black levels are also strong with a nice sense of image depth and shadow separation. The party dance scene is a little thick though and you almost lose track of who anyone is. Elements are in great shape without any serious age-related issues to report. 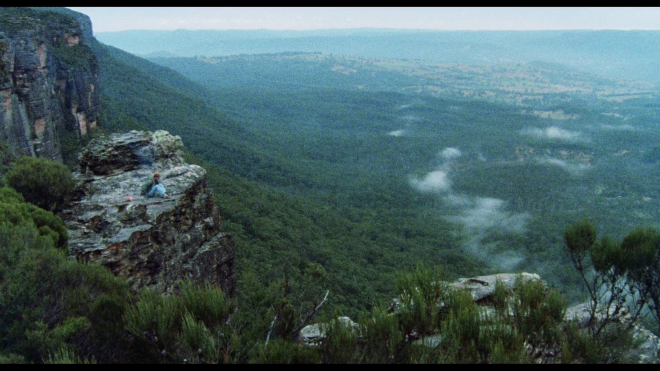 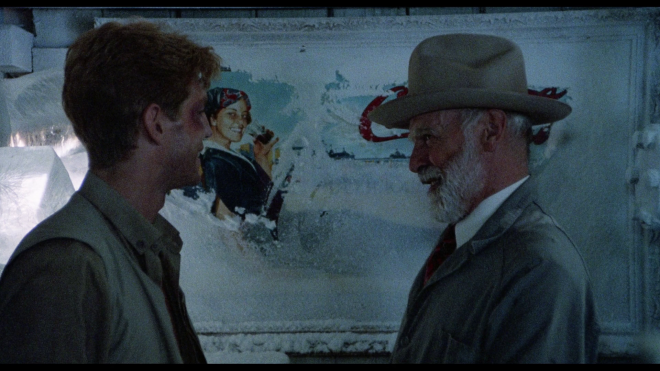 While the video presentation is great, I’m giving a lot of credit to a damned impressive LPCM 2.0 mix. From calm quiet intimate conversations to loud busy streets or parties or factories, this track is steeped in rich atmospherics for a welcome immersive quality. Dialog is clean and clear throughout without issues unless you struggle with some of the thick Australian accents. Scoring offers up nice emotional beats and the new Australian-themed Coca-Cola tune is a genuine earworm to the point you’d swear it was official marketing and not made up for this film. 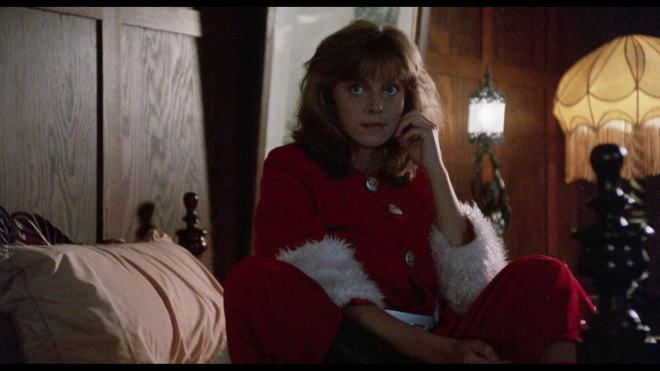 While The Coca-Cola Kid doesn’t deliver a huge number of bonus features, what it lacks in quantity it makes up for with quality. In addition to the 10-page booklet, you pick up a nice informative audio commentary with Lars Nilsen and Jonathan Hertzberg from Fun City Editions. After that, you get a couple of cast and crew interviews but the nicest of the bunch I’d say is the relatively short but welcome interview with Eric Roberts recalling his experiences working on the film and his career. 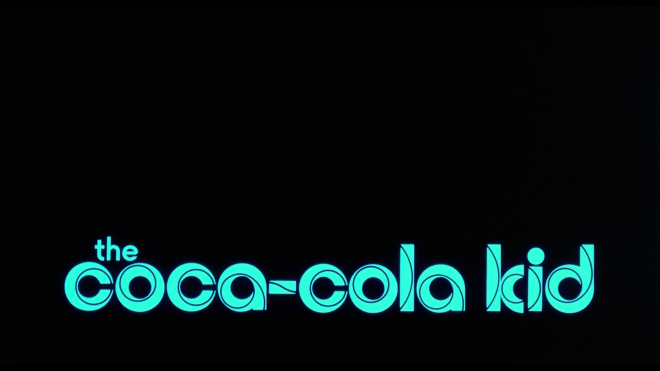 The Coca-Cola Kid was one of those movies I’d never seen but heard of in passing. Without a strong recommendation, I never sought it out so this was a first-time outing and an overall pleasant experience. The film offers up a welcome fun energy and a want to entertain the audience. The general plot is familiar but the locations and the great cast make it feel fresh enough to give it your attention. A nice easy-breezy movie for a summer afternoon. Fun City Editions with Vinegar Syndrome delivers a solid Blu-ray release for The Coca-Cola Kid. Scoring a great A/V presentation, the film looks and sounds fantastic and the collection of bonus features is certainly worth giving them extra time for. If you’re up for trying something new or revisiting an old favorite you haven’t seen in a long time, check out The Coca-Cola Kid. Worth A Look