Based on Nell Dunn's iconic tale of life in London's swinging sixties, Up the Junction is a memorable slice of British cinema starring Suzy Kendall (Tales That Witness Madness) as Polly and Dennis Waterman (TV's The Sweeney) as her hard-up boyfriend, Pete. The tale is of a bored, young party girl who decides to cast off her affluent Chelsea lifestyle to move to the industrialized ghetto of Battersea. In search of realism, Polly takes a factory job where she befriends sisters Rube (Adrienne Posta) and Sylvie (Maureen Lipman) and moves into a rundown apartment in the area. She soon discovers the seedier side of life in an impoverished world of crime, desperation and questionable morality-a side of life that everyone but Polly is desperately trying to leave behind. This beautiful and haunting film was directed by cult-filmmaker Peter Collinson (Innocent Bystanders, The Italian Job).

Directed by a pre-'Italian Job' Peter Collinson, 'Up the Junction' adapts Nell Dunn's 1963 book of short stories depicting life in the industrialized area of South London and, particularly, Battersea. Dunn's semi-autobiographical tales were adapted once before, in 1965 for the BBC, but the 1968 Collinson version, with music by Manfred Mann proved how popular and resonant the book and the culturally relevant observations and ideas behind it actually were.

Starring Suzy Kendall as Polly, 'Up the Junction' is a '60s slice of life film that, at its heart, is examining the competing ideologies of social classes, as part of their unique worldview. Polly, an affluent party girl from Chelsea has left behind her comfortable lifestyle in search of what she considers to be a more real way of living. This decision brings her to Battersea, where she gets a job working in a candy factory and soon makes the acquaintance of sisters Sylvie (Maureen Lipman) and Rube (Adrienne Posta). Rather than the posh gated home with white pillars she returns to after her first evening on the town as a Battersea factory girl, Polly soon moves into a dilapidated apartment, which she fills with secondhand furniture proudly purchased with her own wages. The furniture is delivered by Pete (Dennis Waterman), a Battersea lifer with dreams of escaping what he perceives to be a dreary, working class existence by any means necessary.

After the setting is properly established, Polly's background and her desires are revealed slowly and in layers, often in response to the principles and conditions she's exposed to in Battersea. Sylvie and Rube are a couple of livewires with a penchant for smoking, drinking, and carousing with seemingly heedless men who drive fast motorcycles and think nothing of the future. For many, it's their lot in life, and for whatever reason, that's the lot Polly has chosen to think of as more genuine than the world of wealth she's ostensibly left behind. 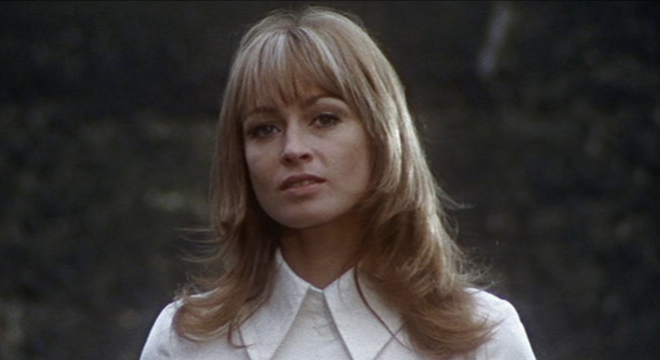 Thanks to its inside out examination of class, culture, and the respective viewpoints contained therein, 'Up the Junction' has plenty to say about the ambitions and activities on both sides, primarily through the inexperienced Polly, who doesn't even speak the language (the slang is beyond her comprehension initially). Mostly, the world is established through her encounters with a mixture of rounded and more broadly drawn characters. For every Pete, Sylvie, and Rube, there's a sullen factory worker with a perpetual runny nose, a drunk, philandering husband who's not afraid to hit his semi-estranged wife in public, and a real estate agent eager to rent to a fresh faced white woman, but finds it difficult to locate accommodations for a black family. Some of the auxiliary characters border on caricature, but it comes across as exaggeration with purpose.

As Polly and Pete's relationship becomes more intimate, they find themselves tested by the rougher elements of Battersea, which Polly seems to see as genuine, even in their tragedy, while Pete sees it as every reason to strive for more. As Polly gradually becomes more and more taken with her co-workers and their way of life, Pete progressively begins to push back, first rejecting Sylvie and Rube, and then by pressuring her to spend a weekend away with him in an upscale part of London. The social rift between them widens after the very young Rube's experience with a back alley abortion only brings Polly closer to the people Pete craves distance from. At a certain point, Polly and Pete, too, become amplified characters, as their hopes and dreams for themselves, and for one another, inevitably lead to a discord that boils down to a contradiction of perception.

'Up the Junction' manages the goings-on in Battersea as the central focus for much of the film. The colorful personalities act in binary opposition to the desperation many feel about their seemingly inescapable circumstances. This discord becomes further agitated by Polly's keen, almost superficial appreciation of it all, finding it more authentic than the life of shallow excess and greed she was born into. Collinson and screenwriter Roger Smith precisely establish the knotty aspects of Polly's pursuit of a more honest, authentic life by demonstrating how she's just shifting from extremes, suggesting that while her lifestyle may seem more sincere and honest, it's little more than an affectation. No matter how far Polly wanders from her previously comfortable existence, it will always be there for her to fall back on.

That difference, the knowledge of having a safety net, is the true gap keeping Polly from wholeheartedly becoming a part of (or accepted by) the Battersea way of life, and it is also what keeps others from comprehending her need to walk away from the kind of prosperity they can only dream of. The genuineness of a simple existence that Polly is clamoring for is no more obtainable than Peter's desire to live the good life. 'Up the Junction' demonstrates the thematic unity of insurmountable circumstances and division of one's fundamental nature by offering Peter a glimpse of his goal, only to reveal his assimilation will never amount to anything more than a mere artifice. The suggestion, then, that Collinson, Smith, and Dunn seem to be making is: at the end of the day, the only thing truly genuine and universal is the notion of desire itself. 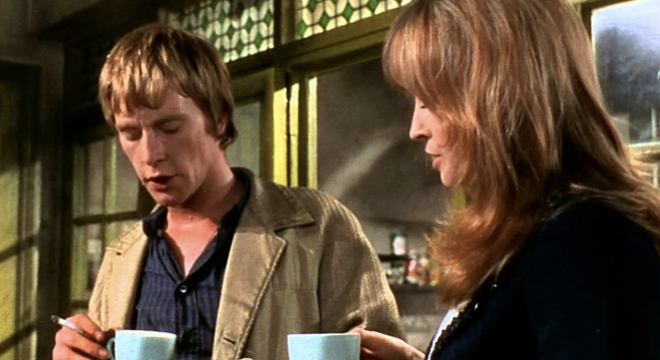 'Up the Junction' comes from Olive Films as a single 25GB Blu-ray disc in the standard keepcase. The disc contains an insert featuring several other offerings from Olive Films and a form to be put on the company's mailing list. There are no previews on the disc, as it contains only the movie.

'Up the Junction' is presented in its original 2.35:1 aspect ratio, with a 1080p AVC/MPEG-4 encoded transfer that starts out with some heavy, almost severe grain over the title sequence that soon gives way to a splendid, bright, and detailed image that only occasionally feels overwhelmed by issues with the grain. Thankfully such inconsistencies are few, viewers are left with a solid, steady picture that wholeheartedly embodies the kind of visual aesthetic of the time. Colors are bright, but never garish, despite the efforts of some of the costumes. Meanwhile, fine detail, though diminished somewhat by the presence of grain, remains strongest in the close ups, while moderately present in wider shots. Textures, too, seem to be visible mostly close up, but plenty of background elements appear finely detailed throughout the film.

For the most part, contrast is high. Black levels look inky and robust, and there is no sign of banding or crush anywhere on the image. Shadow delineation is strong throughout, though white levels can occasionally look bright than necessary. (This occurs toward the end of the film, so there is some question about the deliberateness of this effect).

Overall, for a film that is nearly 50 years old, 'Up the Junction' looks remarkably well kept and presents a strong, energetic image much of the time.

The disc has been given a DTS-HD Master Audio 1.0 mix that brilliantly highlights Manfred Mann's songs, while also managing the needs of the dialogue and sound effects. In that sense, the dialogue is constantly clean and crisp, even amongst the din of a noisy pub or the roaring sound of motorcycles. The mix handles the different elements quite well by almost imperceptibly shifting the focus from atmospheric or musical elements to the actors speaking when need be. While the many elements are focused through a single channel, the effect is still quite dynamic; reaching a depth and richness that is surprising for both the format and the film's age.

There are times when the limitations of both are made evident, however. Primarily, this comes when the mix needs to convey sound that has tremendous weight to it; something, like, say, an automobile accident or the like. While the audio here doesn't necessarily falter, it does tend to produce an overly metallic sound that lacks the deep, resonant LFE, which might have made the effect more pronounced and resonant.

Still, despite the restriction, the lossless audio here is superbly handled, and manages to highlight the most important aspects of the film. Overall, this is quite a nice sounding mix to accompany the image.

'Up the Junction' does not contain any special features.

As a film that explores the kind of social boundaries effecting people from half a century ago, 'Up the Junction' still seems remarkably prescient in its observations. While that fact is more than depressing, it speaks to the effectiveness and significance of Dunn's original stories, and the quality of filmmaking undertaken by Collinson. Although the disc does not contain any special features, the presentation of the film alone is enough to make this disc recommended.

Sale Price 29.92
Buy Now
3rd Party 28.98
In Stock.
See what people are saying about this story or others
See Comments in Forum
Previous Next
Pre-Orders
Tomorrow's latest releases