You can’t keep a good genre down for long - but you can be late for the party. Douglas Grossman’s 1989 unconventional slasher flick Hell High puts a creative spin on a tired trope, but after so many Halloween, Nightmare, and Friday films, audiences didn’t notice or care and the film faded into obscurity. Now resurrected for Blu-ray by Arrow Video, Hell High can terrorize a new generation of slasher fans aiming to complete their archive of wayward classics. With an excellent A/V presentation and a nice selection of bonus features, at the very least this forgotten horror flick is well Worth A Look

After witnessing the death of two teens on a rural country road as a child, Miss Brooke Storm (Maureen Mooney) works through her lingering trauma as a high school teacher. Almost completely avoiding human contact after work hours, she’s a bit of a hermit and a mystery to her colleagues and students alike. However, after taking some upstarts to task for their behavior, Miss Storm is about to have the worst night of her life when a group of her students tries to get some revenge with a seemingly innocent prank. But when the teens take the prank too far, their corporal punishment could be fatal. 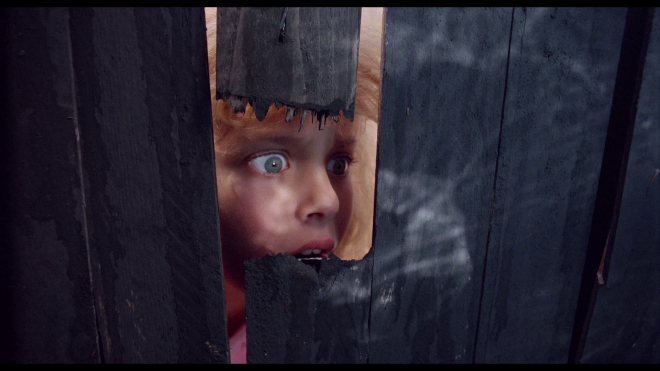 By the time Hell High hit theaters there’d already been eight Friday the 13th films, five Halloween films, and five Nightmare on Elm Street films with countless imitations and knock-offs in between. With diminishing returns in quality and box office, a new original slasher like Hell High just wasn’t a welcome addition to the scene. Not helping matters, this film was dropped ahead of one of the busiest summer box office seasons of all time. It was an easy film to miss and for fans of the era an easier one to forget.

But that isn’t to say Hell High is a bad movie. It’s actually quite good. The low-budget nature of the film holds back some of its better efforts but co-writer and director Douglas Grossman manages to craft a smart and impressive thriller. This isn’t your routine stalk and slash creeper and it isn’t littered with silly puns and humor from other franchise efforts. It’s more cerebral and creepy not relying entirely on jump scares and gore to entertain its target audience. When the killing starts it’s shocking and intense. There are enough red-herring twists to keep this film fresh and unique. However, once those twists have played, the film doesn't have too many surprises left for repeat viewings

I discovered this movie on VHS with a group of friends as a teen. We enjoyed it at the time but it wasn’t ever one that I sought out or bent over backward to see again. The first viewing is a great experience with those shocking twists but because of the reveals and twists and turns and the startling ending, there’s just not a lot of replay value. Even after twenty-plus years, once I got settled into watching this again, all of those reveals came back and it just wasn’t as shocking or gnarly as I’d hoped it would be. 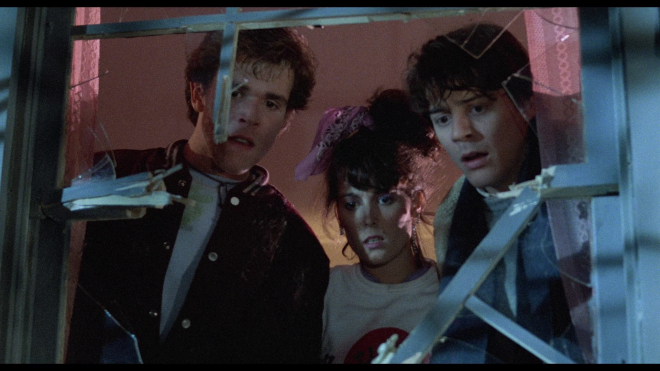 Given that conceit, if you’ve never seen Hell High I’d say you’re in for a real treat. You may have to forgive some of the first-time actors (and sadly for some - last-time actors), but overall this is an effective and creepy flick. This is the sort of horror show that’d run best with a group of people to play off the reactions from the twists and when that first kill happens! William Depaolo is credited for the special makeup effects and it’s some great work; the opening sets the stage for the teenage massacre mayhem to come. Maureen Mooney delivers a hell of a performance as the traumatized teacher. Christopher Cousins stands out as the “do-gooder” caught way over his head. A special shout-out needs to go to the late Christopher Stryker for his overly creepy and maniacal Dickens. He easily steals the show but he sadly passed away from AIDS before this film even made it to theaters. He deserved a much longer and more prosperous career than this film and an episode of Welcome Back Kotter. Taken as a whole Hell High may not be as grand as some folks make it out to be, but it’s not a travesty either.

Hell High is an interesting take on the Slasher sub-genre that deserves to be seen and appreciated. I really liked the teenage character relationships and their authentic-feeling nature. There’s the jock, the former jock who needs to fit in elsewhere, the bully, the sultry dame, the overweight nerd (that'd been me in high school) - they’re all stock character tropes but they’re played well. A lot of the film plays like a psychological thriller slasher version of The Breakfast Club. If it’d leaned into that idea a little more, maybe it might have stood out long enough to get more notice and not so savagely shredded by critics. Or, it could just have been too much of a good thing. Timing is a tricky game with any popular genre and if you’re late to the party, it doesn’t matter how good the movie is it'll struggle to find an audience. Thankfully time and technology have given this film the chance to be seen and appreciated. 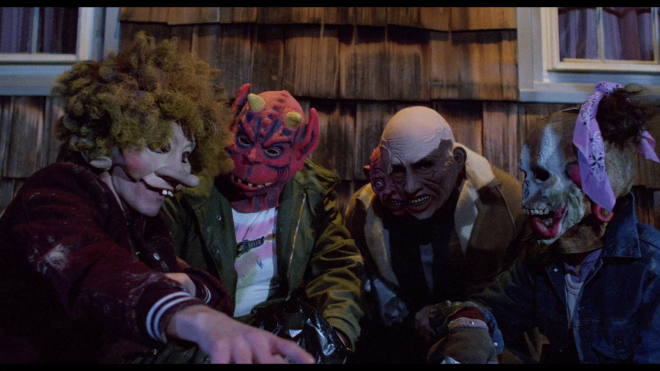 According to the restoration notes, Hell High was restored from a new 2K scan of the original 35mm negative and the results are damned impressive. I never picked this one up when it hit DVD a few years back so this is my first outing with it since the VHS era and it’s quite something to see this much detail. Facial features, production design, costumes, and gnarly makeup effects are all on display. For those high school jocks, you can even make out the fuzz on the letterman jackets! The colors are pretty good but there are a few instances where I felt either Blues or Reds were being pushed a little hot. Not all the way through, but there were a few scenes where it looked like the cast was just too pink-skinned. There are also a couple of scenes that look slightly bleached, not severely but enough to make you look at it twice compared to the adjacent shots. Likewise later in the film when the kids are gathering their swamp goo for their prank, the black levels are particularly thick with a little crush slipping in. As a whole, this is still very good considering the age and stature of the film. 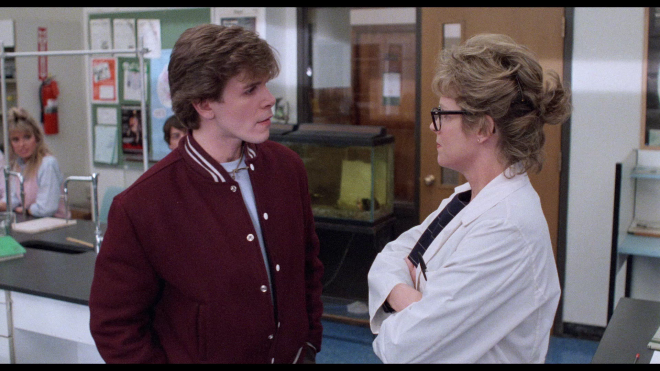 This release also packs in a strong LPCM 2.0 audio mix. Throughout the film, dialog is clean and clear and never at issue. Scoring is ample and well mixed to give some extra tension and terror in the right places. There’s plenty of imaging in the soundscape to keep the channels active without any dead air and help keep the mix feeling open and alive. Free of any hiss, pops, or any notable damage, this is an all-around solid track for this film. 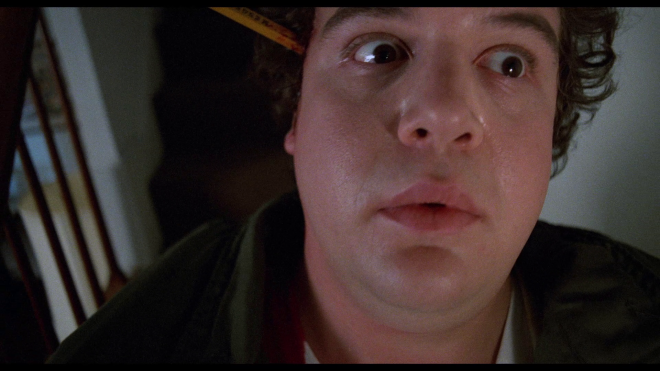 While this isn’t a title that most would demand a lot of attention from, Arrow really jumped into the thick of things to deliver a great selection of new and archival bonus features to pick through. A little warning though, if you haven’t seen the film yet, forgo the Joe Bob Briggs commentary and especially his optional opening introduction as it’s very spoiler-heavy and will ruin a lot of the surprises. After the three great commentary tracks, we have a few new cast and crew interviews as well as a bunch of archival materials to check out. 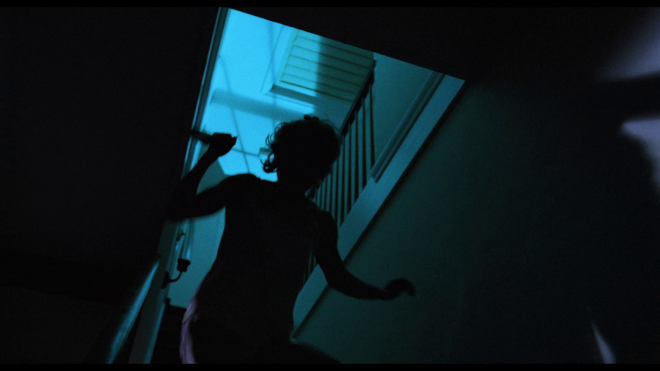 Hell High is simply a victim of poor release timing. A clever take on the Slasher sub-genre, it features some great performances and some clever twists and turns to the plot that might have set it above the pack if anyone had noticed it. Largely forgotten over the years, this film may not offer much replay value once those twists are exposed, but it’s absolutely worth checking out if you’ve never seen it.

Arrow Video works some magic restoring this film to its full glory. The A/V presentation is top notch while the bonus features package is a deep well of entertaining and informative content worth slicing through. If you’ve never attended Hell High, it’s time to get to class! Worth A Look