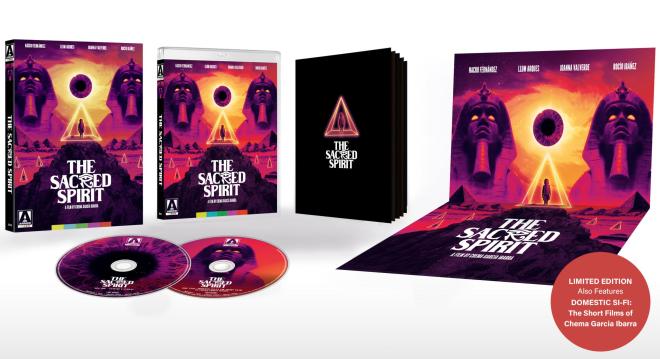 The uncanny, the unsettling, and the unexpected combine to devastating effect in The Sacred Spirit, the extraordinary debut feature from Spanish writer-director Chema Garcia Ibarra.

A missing girl. A community in shock. Jose Manuel lives a quiet life. He works in his modest tapas bar, takes care of his elderly mother and attends weekly meetings of the Ovni-Levante, a group of devoted UFO enthusiasts who gather after hours at the office of a local estate agent to exchange information about extraterrestrial messages and alien abductions. When their leader dies unexpectedly, only Jose is left to know the cosmic secret that could alter the future of humanity. And only Jose knows what he must do.

As if Ken Loach and Aki Kaurismaki remade the The X-Files, The Sacred Spirit is a provocative, humane, and unsparing vision that marks the arrival of a unique new voice in genre cinema.

• Beyond the Eye of Horus, a visual essay about the use of surveillance and Egyptology in The Sacred Spirit by Alexandra Heller-Nicholas

• Behind the Scenes, four short featurettes shot during production

• Elche Vision, a series of six location reports about the making of the film, hosted by actress Lorena Iglesias in character as Esther Armengol, presenter of The Sacred Spirit’s fictional local TV show

• The Attack of the Robots from Nebula-5 (2008) 7 mins, Sundance Film Festival Award Winner